Leo Baker knows he’s living the best version of his life so far.

“I film street skating and put together video parts [for skate videos] and I get supported for doing those things,” says Baker over a late breakfast in July. “That’s, like, the ultimate dream.”

This life also includes running his own company, Glue Skateboards, with co-founder Stephen Ostrowski, as well as recently releasing his first song. He’s even featured as a playable character in the updated version of “Tony Hawk’s Pro Skater,” the video game that taught him professional skateboarders exist.

It’s the future that’s teased during the closing moments of the documentary “Stay on Board: The Leo Baker Story,” out now on Netflix, but was by no means guaranteed. Directed by Giovanni Reda and Nicola Marsh, “Stay on Board” follows the transmasculine skater as he works to qualify for the Tokyo Olympics as a member of the U.S. Women’s Skateboarding team while navigating his evolving understanding of his gender and the toll that this career built around being assigned female at birth is taking on him.

“I just wasn’t really equipped or prepared to figure out what that would be like, to transition,” says Baker, who admits he hadn’t given much thought about how he would address his gender when he signed on for the project. “I just didn’t think it was in the cards for me.”

A veteran skater, Baker was used to keeping his gender identity something he was open about with only his friends and family and separate from his professional life. But as the cameras roll to capture Baker’s expected journey to the Olympics, the film documents just how much maintaining a “split life” between his authentic self and the public persona (and assigned gender) attached to his career is unsustainable — until he publicly declares his name, shares his pronouns and quits the Olympics.

“It just got to the point where the need to transition was so apparent,” says Baker about the real life “plot twist” documented in the film. “They just captured a really special moment of life, where I kind of just reached my breaking point on camera and then had to make a decision about what to do about it. It was a pivotal time in life and [it] just happened to be caught on camera.”

Leo Baker says just being able to be himself after coming out has been “the biggest relief.”

“What was really interesting to me about Leo and his journey was that he’s someone well known in the world [who was] having to navigate being on such a huge platform and going to the Olympics,” says Alex Schmider, the director of transgender representation for GLAAD who serves as an executive producer on the film. “The testament to choosing yourself above everything else, despite what everyone else is telling you to pursue and do, was just really compelling to me.”

Baker’s story is one that has been resonating with audiences since even before “Stay on Board’s” Netflix debut. The film premiered at the 2022 Outfest Los Angeles LGBTQ+ Film Festival last month, where it won the audience award for documentary feature. The response is a credit to the collaborative spirit behind the scenes, with the directors reaching out to other filmmakers like Schmider and film editor Sasha Perry who could personally relate to aspects of Baker’s experiences.

“As a trans man myself, there’s often this feeling that you have to compromise and sacrifice what you love to be who you are,” says Schmider. “Knowing what Leo was contending with — with his love of skateboarding, and also wanting to be himself — I think I was drawn to that story that we rarely see of not having to compromise who you are and really stepping into your full self in a way that is empowering not only for trans people, I hope, but for all of us to not bend to society’s expectations of what success looks like.”

As Baker reflects on his journey since filming wrapped on the documentary, he notes that one of the biggest shifts he’s noticed is the relief he feels now that he no longer has to navigate who he is “supposed to be in what setting.”

“Just to strip away all of the, like, fragments of iterations of who I am and just be myself and that’s it, that’s been the biggest relief,” says Baker, who recounts how the skating industry had long put pressures around his assigned gender and how he presented himself. He admits he was initially terrified of what could come in the aftermath of publicly coming out — including transphobic comments on social media and having to field interview questions about his experience before he would have had time to process it for himself.

He was also unsure of what his place would be in the industry after his transition, especially since he had previously experienced his skating career just disappearing. But this time his sponsors have not only stuck by him, he feels they “have [his] back even harder now,” which allows him to focus on more of his creative pursuits and get back to what he loves about skating.

Among these endeavors is Glue, which Baker co-founded with fellow queer skater Ostrowski, about whom he has only effusive praise. In addition to designing skateboard decks and apparel, the company is a way for Baker and Ostrowski to cultivate a supportive space for their community of skaters. Because for all that skateboarding has been associated with being a community of self-identified outcasts, it’s also an industry that has historically been heteronormative and not always inclusive of LGBTQ+ skaters. 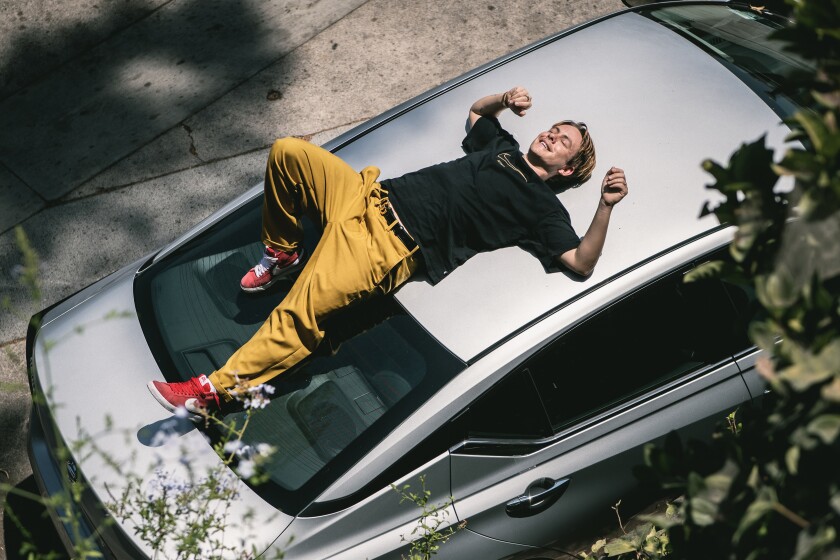 Leo Baker is looking forward to getting back to enjoying the simplicity of just skating.

At Glue, “a bunch of us are trans, genderqueer, women — it’s really just a dope group to be a part of,” says Baker. “It’s awesome to build that family out and really just be supporting people that we truly just love and care about as humans.”

Although “Stay on Board” focuses on Baker’s personal journey, he is aware that the film is arriving at a particularly fraught time for the LGBTQ community. Conservative politicians have been increasingly hostile toward queer people, with numerous states passing legislation that specifically targets the trans community and trans youth. These laws include those banning access to school sports, school bathrooms and gender affirming care.

“I can’t fathom what that must be like to know that it’s possible to be trans, get support, get the things you need, and then have the government just, like, rip it away,” says Baker. “For me, I just had no f— idea. I was naive and didn’t really know what I needed. But if you know what you need and can’t get it because the government is invalidating you, it’s just crazy and really, really sad.”

For this reason, Baker is excited about the large reach Netflix has as a platform and hopes people across the world will see his story, one “version of what it’s like to be trans.”

“There’s so much information out there about how gender is expansive, and I hope that people, any kind of people, get in touch with that, because it’s really actually beautiful,” says Baker.

And what he’s most looking forward to next after sharing his story as widely as he can is to get back to the fun of skating and doing the things he loves to do.

“I’m really excited to just get back to the simplicity … and just skate and take care of my body and run the company and just make music and not talk so much,” says Baker. “There’s going to be a time where I’m like talking less, and that’s gonna be great.”

‘Stay on Board: The Leo Baker Story’

Rating: TV-MA (may be unsuitable for children under the age of 17 with an advisory for coarse language)