Twenty-one months after a bagpiper performed at his wedding, Jimmy Jeske had to track him down again. This time, it was to play at the funeral of his wife of less than two years.

Mary Elizabeth Jeske’s death March 1 came 21 months after getting married, four months after giving birth to her son Harry and just three weeks after finding out she had colon cancer.

In states where abortion is illegal, college students ramp up activism

“She was on the cusp of this beautiful fairy tale,” her brother Joe Duffy said. “She and her husband had just bought a house in River Forest, and she retired to be a mom.”

Mrs. Jeske kept a picture of her infant son next to her in her hospital bed at Northwestern Memorial Hospital, where she died.

Her brother said that, after hearing her diagnosis Feb. 7, she said: “What good does it do for me to cry? I am going to try and fight this.”

He said her family is grateful they had the time to tell her: “ ‘You’re an amazing daughter, wife, aunt, sister.’ Those are the conversations we had.”

Mary Elizabeth and Jimmy Jeske with their baby Harry.

She had time to ask Ellen Bowman, a friend since elementary school, to do something for her.

Before she died, Jimmy Jeske texted her mother Trish Duffy to share one of the last things he’d gotten to tell her:

“I told her in the grand scheme we are all here a short time but her time is a little shorter. We will be together again soon enough…She will always be Harry’s mom…She told me that I gave her a life but I said she gave me a life too.” 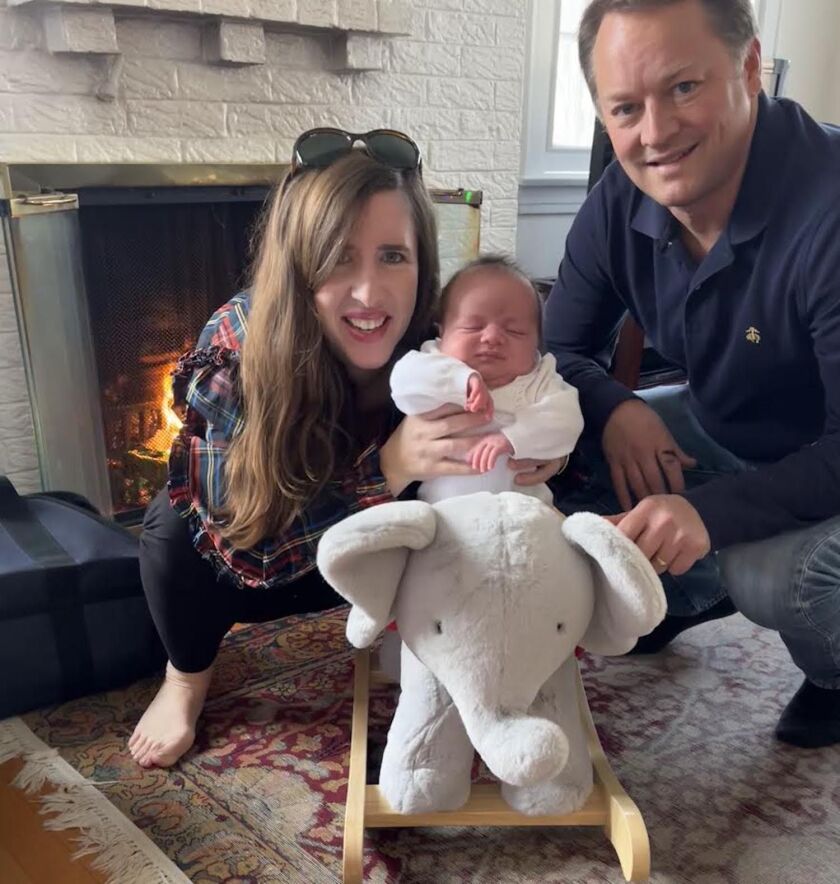 Mary Elizabeth and Jimmy Jeske with their son Harry.

Her mother texted him back: “Your love will survive forever!” 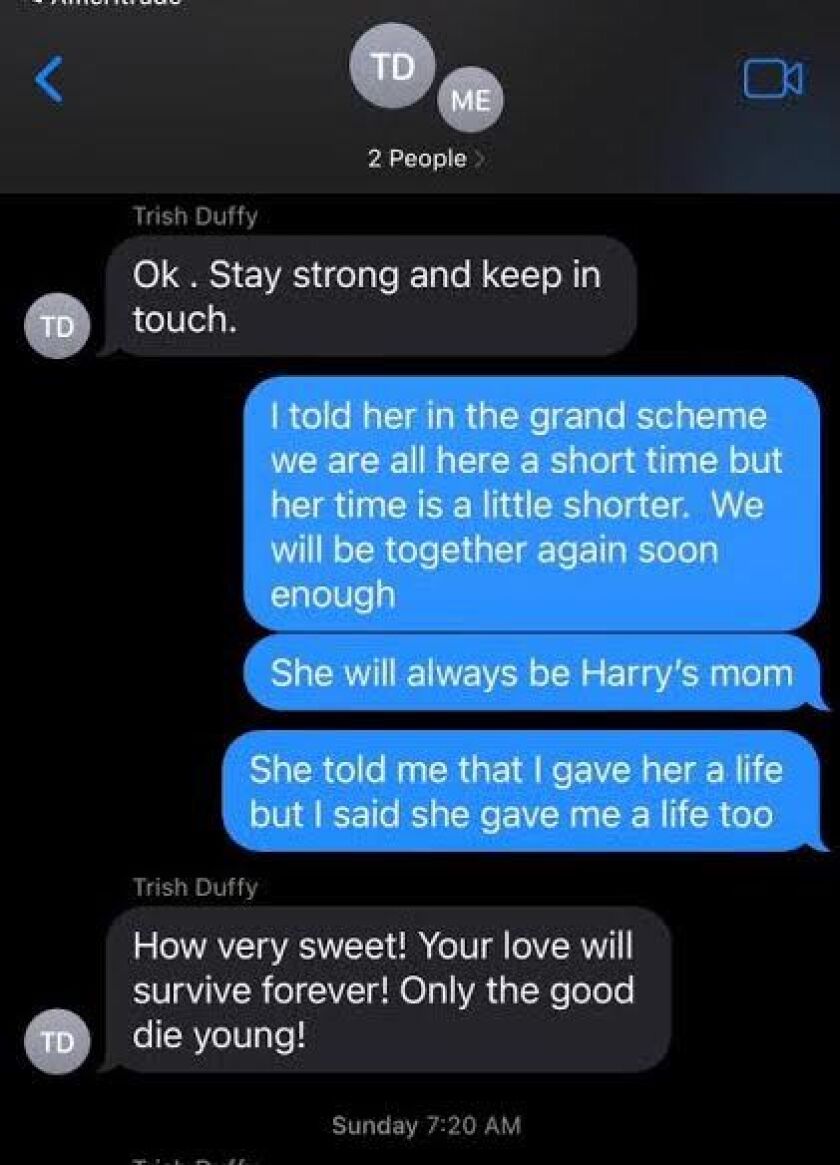 He said that, at one point, his wife had told him, “When I turn 40, and you turn 50, we’re both going to get our colonoscopies.”

Their love story began in July 2018. That’s when Mary Elizabeth Duffy matched with Jimmy Jeske on Bumble, the dating app.

He works in finance as a risk manager. Before leaving her teaching career to focus on Harry, she’d taught kindergarten for 17 years at Seventh Avenue Elementary School in La Grange.

They quickly discovered they knew a lot of the same people. Both had attended Catholic school from elementary school through college.

And they never ran out of things to say. They took a driving trip to Savannah, Georgia. It took 15 hours.

“We didn’t turn the radio,” Jeske said. “We were just talking the whole time.”

“When we found we were made for each other,” he said, “maybe we were making up for lost time.”

He didn’t know many of his Albany Park neighbors. That changed when she moved in. People seemed to gravitate toward the effervescent teacher.

On their wedding day, “We look out the window, and all the neighbors were decorating the trees” with red felt hearts, he said, and they offered the couple Champagne. “I think everyone loved Mary Elizabeth, and they wanted to do stuff for her.” 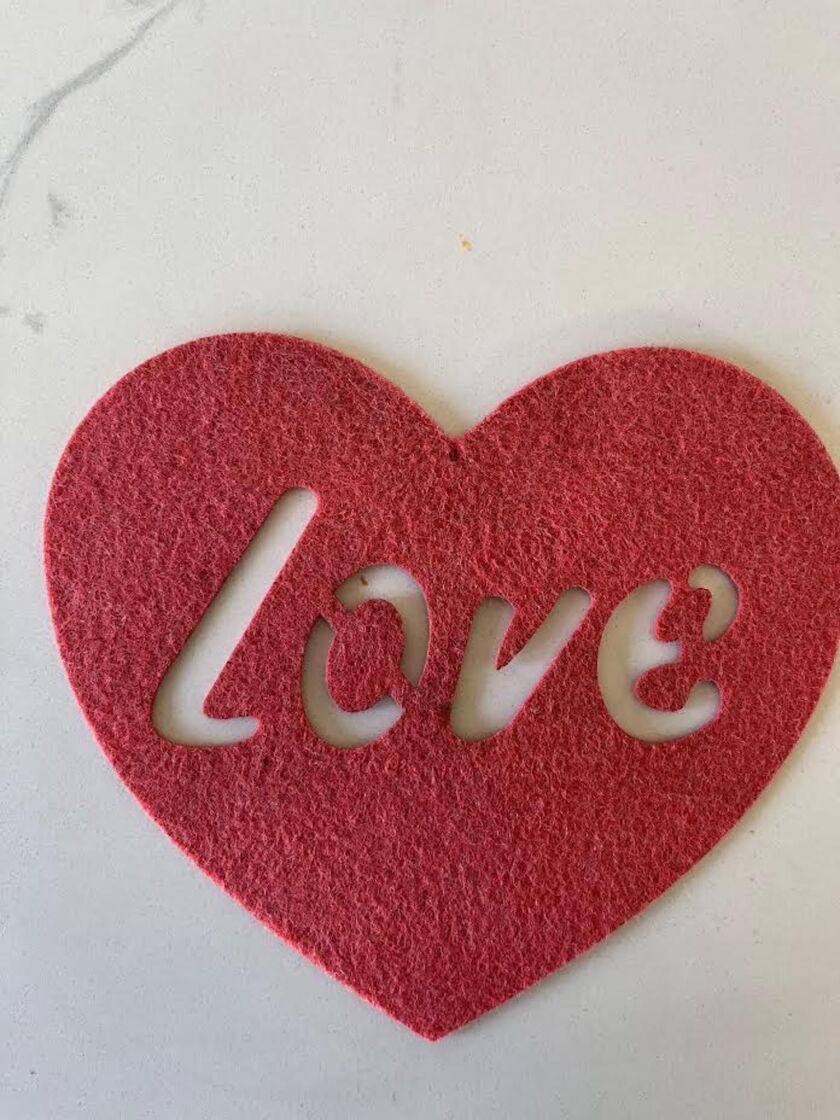 One of the red felt hearts that neighbors placed in the trees on Mary Elizabeth and Jimmy Jeske’s wedding day.

Mrs. Jeske and her husband left up the red hearts that their neighbors put in the trees in their wedding day.

“Every time a heart would fall, she’d bring it to school,” Jimmy Jeske said, “and put it up on the board.”

On their wedding day, en route to the Shrine of Our Lady of Pompeii Church on the West Side, she arranged to have their limousine stop outside St. Mary of Providence, 4200 N. Austin Ave., so her aunt Katy could see her in her wedding gown and feel part of the celebration. Because of the coronavirus pandemic, her aunt couldn’t leave St. Mary’s, a residential facility for people with developmental disabilities.

“That’s the kind of thing that demonstrates how loving of a person she was,” said Jack Duffy, her other brother.

Through his sons, her father Joe Duffy said: “She made the world a better place.”

As Mrs. Jeske was about to enter the hospital for treatment, she reminded her brother Joe to give his daughter Coco the unicorn kit she’d already bought her niece for her birthday.

On her deathbed, she asked Joe and Jack where they were taking their mother for her birthday.

“Here you are, so sick, why are you worrying about somebody else?” Joe Duffy said he asked. “She was, like, ‘That’s what I do.’ ”

“She always thought of everyone,” her husband said. “She made me feel really special. And I think she was like that with everybody. She was very outgoing, very kind. She was very patient. She was always complimentary.”

One time, a student interviewed her by text about what she liked about her job.

Mrs. Jeske said: “I love being a teacher! As a teacher I enjoy singing, playing the piano, greeting each student in our class, sharing, planning activities that are hands on, answering questions, solving problems, seeing students grow academically and socially just to name a few things.”

Young Mary Elizabeth grew up in Western Springs. Her mother — who gave her the nickname Presh, short for “Precious-ina” — also was a teacher. Her father worked in sales.

She went to St. John of the Cross grade school, played basketball, did Irish step-dancing, mowed the yard and couldn’t get enough of Lemonhead candy.

Her brother Joe said summer nights on a block filled with kids were magical: “Playing outside. Lightning bugs. Capture the flag.”

They also loved going to the beach at Gillson Park in Wilmette.

Joe Duffy said his sister, as an eighth-grader, would get up early to help him with his contact lenses because he was squeamish about touching his eyes.

“I would open my eyes with both my fingers,” he said, “and she would plop ’em in and go back to bed.”

During high school, she made money babysitting and working at Kirschbaum’s Bakery in Western Springs. She went on to study education at John Carroll University.

Mrs. Jeske carried a big purse filled with goodies, like Cheez-Its, for kids. She always seemed to know just the right time and age to thrill a kid with a gift of Legos or Magna-Tiles.

Working around the house, she liked listening to Jeff Buckley’s “Hallelujah” and George Gershwin’s “Rhapsody in Blue.” She dressed up her house with fresh tulips, lilies and azaleas.

She loved heirlooms and inline skating. She treasured her grandmother’s old furniture and fur coat. Instead of using her phone to pay for things, she wrote checks. 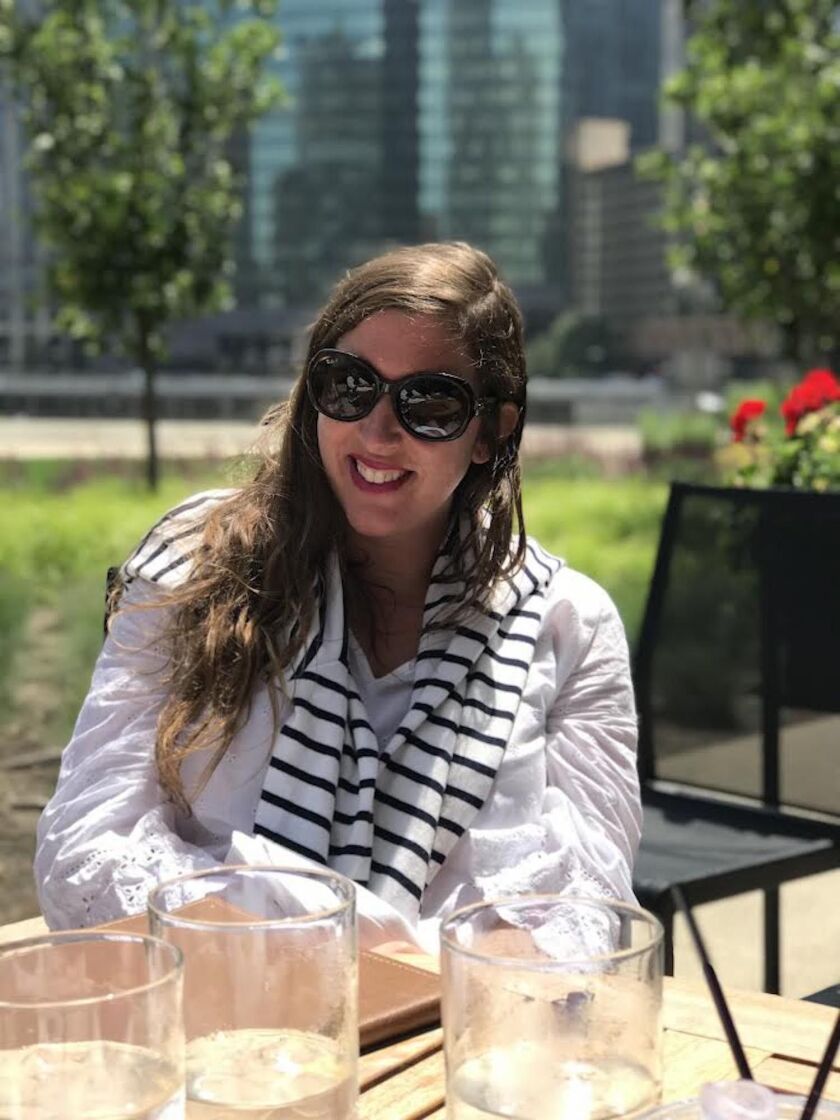 “She’d greet people with a kiss on the cheek, and I used to say, ‘Not with that bright lipstick on! I don’t want that on my cheek,’ ” Bowman said. “I would do anything for that now.”

“At the end,” her brother Joe said, “When she was not sleeping well at night, she would say, ‘Jimmy, tell me about the favorite trip you took.’ It was a way for her to get her mind off the reality.”

Her hospital room would get crowded with people who came to visit. Her husband is one of 10 kids. Her mother is one of 11. Friends and relatives arrived from Boston, Buffalo, Cleveland, Milwaukee, New York City, Oregon and Washington, D.C.

Mrs. Jeske asked Bowman, in her honor, to “buy a young couple Blue Moon,” her favorite beer. So, on a recent Florida getaway, when she and her husband were at an oyster bar, “We bought everyone Blue Moons.

“I’m going to let Harry know what a good person his mom was and how much she loved him,” Bowman said.

Visitation for Mrs. Jeske is planned for 10 a.m. Monday followed by a funeral Mass at 11 a.m. at St. John of the Cross Church in Western Springs. Bagpiper Dave Johnston, who performed at her wedding, will play at the burial at Queen of Heaven Cemetery in Hillside.

Her family asked friends to support a GoFundMe education fund for her son Harry.

“She waited her whole life to get the greatest guy and the new home and the baby,” said her teaching partner Celine Hill. “That’s all she ever wanted.” 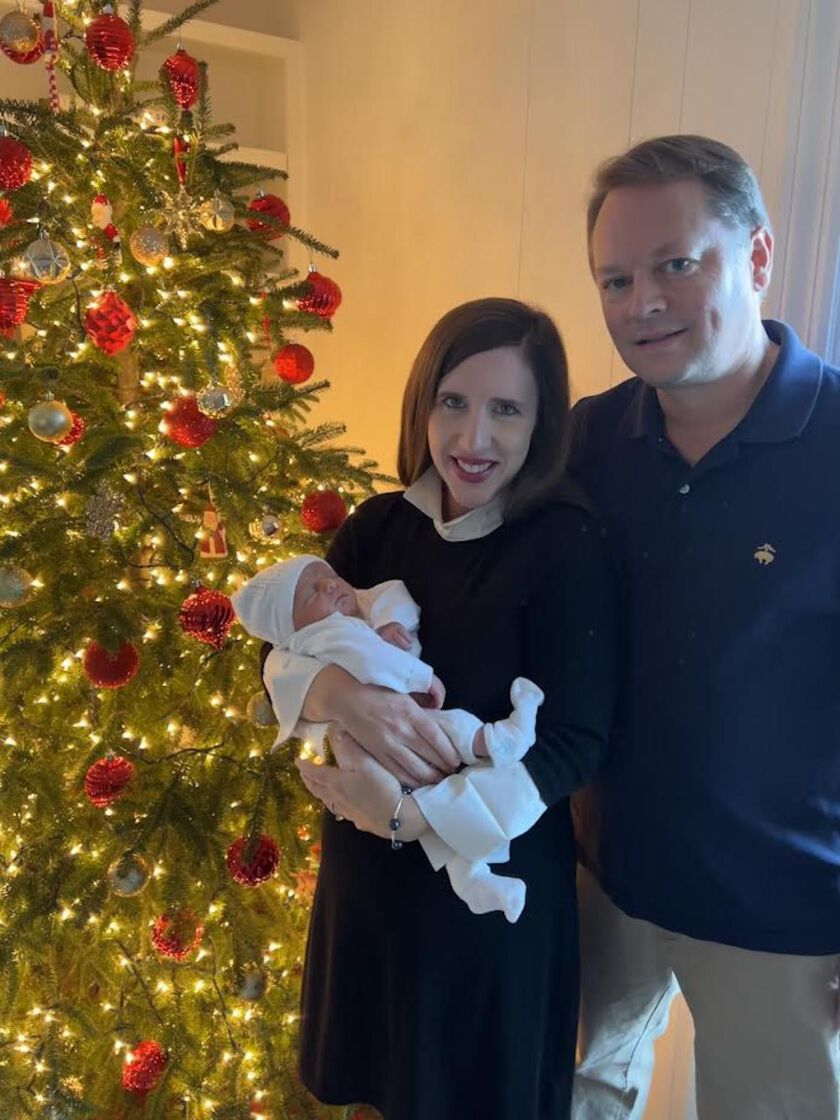 Mary Elizabeth and Jimmy Jeske with their son Harry on what would be their only Christmas together as a family.