Grandma and grandson say they made the world’s biggest Oreo: ‘It was a blast’

A grandmother and grandson are waiting to hear back from Guinness World Records about their 180-pound Oreo.

With assistance from Ohio-based chefs Stephen Miller and Roddy Martin, Smith and his grandma set out to beat the record Guinness has on the books – a 161-pound and 13-ounce Oreo cookie that was baked at a Bahrain factory in 2018.

“We are in talks with Guinness World Records but they won’t have anyone come out for a few weeks, unfortunately,” Smith told Fox News via email. “But as of now with weight and length (circumference) we are the largest in the world [at] 180 pounds and 4 feet wide.”

According to Smith, it took 24 hours for him, his grandma and their baking team to create the massive crème-filled wafer cookie.

Smith documented the ambitious cooking adventure on his verified YouTube channel, which has more than 2.3 million subscribers.

Guinness World Records confirmed to Fox News that the organization has received an application for Smith and Granny’s attempt. The company’s North America branch will have its records team review the evidence that has been presented thus far. 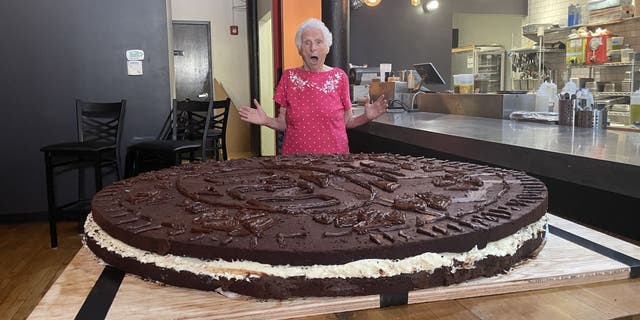 Ross Smith’s grandmother said she wanted to make the world’s largest Oreo because she got hungry.
(Photo courtesy of Ross Smith)

“This has been one of the best experiences I have had in a long time, to see how amazing the cookie turned out. And oh boy was it delicious,” said Granny, 95, in a statement sent to Fox News. “It’s going to take me another 95 years of life to finish this thing unless I get some help.”

When asked why she wanted to create the world’s biggest Oreo, she said the idea came to her because she was hungry.

“My grandma and I have been making videos on the internet for over nine years now. We have over 65 million followers across all platforms,” Smith said. “Our goal every day when we wake up is to make the world smile. And what better way to do so than to make the world’s biggest Oreo?”

He went on, “It was a blast to make and tasted even better. I am happy that I can share moments like this with my grandma while she’s young. It puts a smile to my face every time we can tackle a project like this together.” 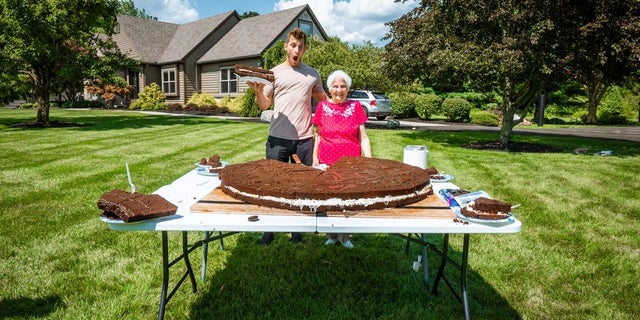 Ross Smith and his 95-year-old grandmother are proud of their 180-pound Oreo and are confident that they broke a Guinness World Record for the largest cream-filled biscuit.
(Photo courtesy of Ross Smith)

The current world record for the “largest cream-filled biscuit” belongs to the Mondelez Bahrain Biscuit W.L.L – a cookie manufacturer in Manama, Bahrain, according to Guinness World Records.

“Once received and reviewed, our Records Management Team will then confirm the success or failure of the record attempt via our portal,” Guinness World Records wrote in an email.

Additional guidelines on the company’s review process for aspiring record-breakers can be found on GuinnessWorldRecords.com.

Cash back credit cards for Netflix lovers (and Disney Plus, HBO Max and other streaming services)

3 of the Best Gaming Accessories to Own and Use

3 of the Best Gaming Accessories to Own and Use