Former personal trainer and his son lose a combined 295 pounds

After years of fast food and all-you-can-eat buffets, Jeff Moore decided to become a personal trainer again — for himself and his son.

Moore, 48, and his son Jason, 19, from London, North Carolina, have lost a combined 295 pounds, according to SWNS. Before their weight-loss journey, Moore weighed about 443 pounds and Jason tipped the scale at 420, SWNS reported.

Since they changed their lifestyle last June, Moore has lost about 150 pounds, while Jason has shed nearly as much.

Moore, an Army vet, told SWNS that he became a certified personal trainer in 2006, 11 years after he left the military.

However, after his marriage fell apart, Moore became a single father to Jason and quit his job as a personal trainer so he could work more normal hours as a fire alarm service technician.

Since he was on the road so often, he ate at fast food chains regularly. But as Moore’s eating habit deteriorated, so did Jason’s.

In 2013, Moore’s father died, so he became his mother’s carer for the next three years until she also died. 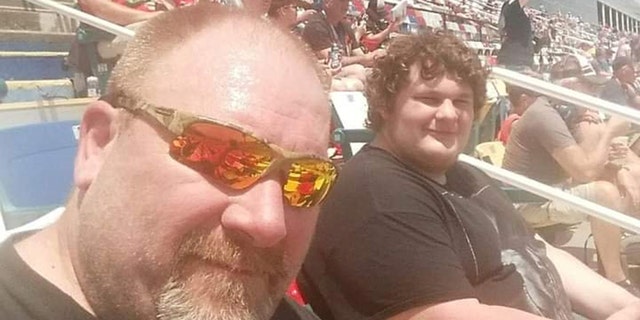 Jeff Moore and Jason are pictured before they started their weight loss journey last June. According to SWNS, they each weighed about 420 pounds.
(SWNS)

“I was a single parent raising a small boy and all that kind of [came] together and contributed to over-eating and alcoholism,” Moore said. “Life hasn’t been easy, and I don’t blame anyone but myself for my mistakes.”

“Food and alcohol were my drugs of choice,” he added. “I noticed it a few years ago, but I just didn’t address it – I made excuses.”

MICHELOB ULTRA GIVING AWAY FREE BEER FOR EXERCISE THIS SUMMER

Even as he made excuses, Moore said his weight gain was impacting his ability to do basic things, like walk to his mailbox. It also prevented him and Jason from doing the things they love to do together, like fishing and hunting.

“My work, it  was almost impossible for me,” he said. “I couldn’t climb ladders. I would have customers call my office and complain I smelled bad or I didn’t look professional, I wasn’t clean — the list goes on.

“I live on a lake and bought a boat and couldn’t sit in the captain’s chair to drive the boat, so that was a horrible moment because I enjoy boating, too,” he said. “There wasn’t much confidence there, and I could also tell I wasn’t getting much respect from people because of the way I looked and carried myself.”

But Moore’s biggest motivation was concern over Jason.

“I worried more about my son,” Moore said. “The respect he was getting from society and getting picked on and bullied at school because of his size was more my concern.”

The turning point came last April when Moore was laid off and the two went to the beach for a vacation. 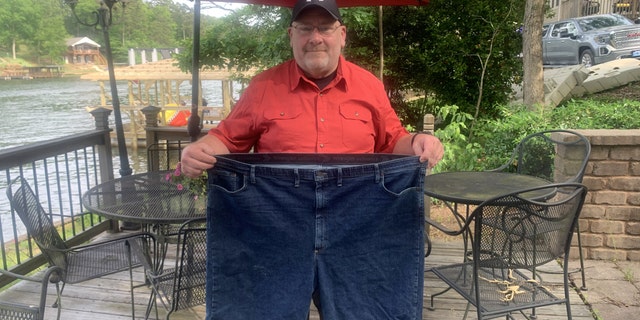 Before he started gaining weight, Moore (pictured) was a personal trainer. However, after becoming a single dad and after both his parents died, Moore spent years gaining weight, eventually reaching 443 pounds.
(SWNS)

“While I was at the beach, all I wanted to do was sit around and not do anything and stay in the hotel room,” Moore told SWNS.

That’s when he realized it was time to make a change.

He said: “I just had enough with making excuses for all the bad things that happened to me over the years.”

Father and son decided to adopt the keto diet, eliminating carbs while continuing to eat fats and proteins.

Moore bought an air fryer and now makes low-carb pizza dough from almond flour, cream cheese and mozzarella. When he goes to the drive-thru, Moore orders double cheeseburgers wrapped in lettuce, instead of on a bun. 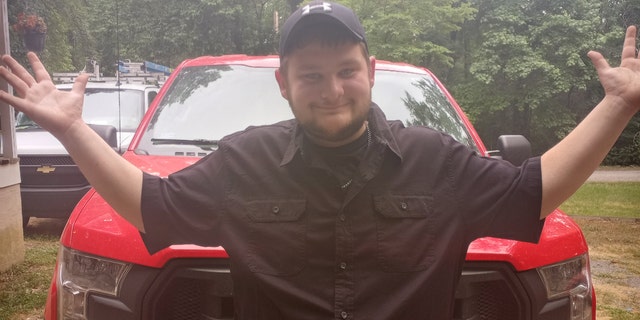 Jason Moore has lost about 145 pounds since he and his dad started their weight loss journey last year.
(SWNS)

He also stopped drinking with the exception of one or two beers on Saturdays.

According to SWNS, Moore lost 100 pounds in just seven months.

“Now I am training myself. I am my own client,” Moore said. “It’s a good feeling. A lot of the things I learned and knew before, I’m able to apply to that to what I’m doing now. I’m able to climb steps and, you know, all those little things that I wasn’t able to do before, those are motivating factors.”

Moore also said he decided to put a pause on dating in order to focus on his overall well-being.

“All of a sudden my bills are getting paid, my credit is improved, and my weight’s getting better. I think I’m going to leave women alone for a minute,” he said.