An obese couple lost a staggering 432 pounds to become parents, after struggling to conceive for seven years.

Dustin Hall, 37, shed a phenomenal 317 pounds and his wife Raquel, 34, lost 115 pounds after doctors told them that losing weight was their only chance at parenthood.

Raquel and Dustin Hal before their 432-pound weight loss.
(SWNS)

Dustin underwent a gastric bypass in July 2016 and adopted a high-protein, low-carb diet to take him from a massive 534 pounds to a svelte 217 pounds in just two and a half years.

Raquel was inspired by his success to have the same operation in December 2018. Then, in April 2020, she discovered she was pregnant. The couple, from Lathrop, Northern California, became parents to Presley on December 21, 2020 and insisted that their weight loss journey made parenthood possible.

“The only reason we can have kids is because we lost a significant amount of weight and we kept it off,” said Dustin, who works in insurance.

“I couldn’t be an active father at 534 pounds. I couldn’t even tie my own shoes at that weight,” he said.

Raquel, who works at a non-profit, said she had been trying to get pregnant for seven years and felt discouraged.

“I had never seen the two lines on a pregnancy test before. I felt like we did it, we got healthy and we accomplished this. Being a mom is worth every second of weight loss, every calorie burned, every sweaty moment in the gym.”

Dustin’s doctor warned him that he could die within six months if he didn’t lose weight. He said he was having trouble breathing at night and couldn’t walk more than 100 yeards without sitting down. The conversation with his doctor, he said, “scared me into shape.” 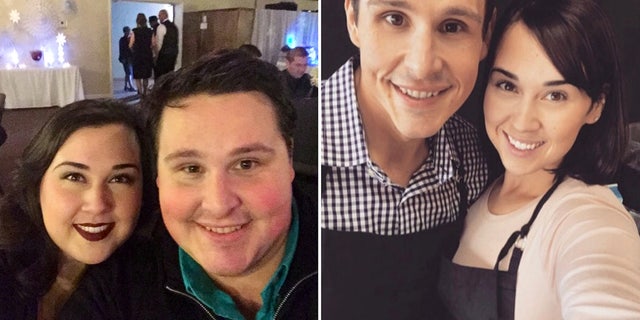 A before and after photo of Raquel and Dustin Hal.
(SWNS)

Dustin underwent the procedure where a surgeon creates a small pouch in the stomach restricting how much food it can hold. He also drastically overhauled his diet, avoiding fast food and instead ate protein-packed meals made with chicken, fish or seafood along with fruit and vegetables.

“I was really uneducated about food. I would commonly have anywhere between 13,000 to 15,000 calories a day. I would go to Taco Bell and have 2,500 calories for lunch. I drank two or three 2-liter bottles of soda a day,” he said, adding he’s now staying away from processed foods.

It took him two and half years to shed all the weight and go from a 7XL to a large top size. Dustin attributes High-Intensity Interval Training (HIIT) workouts to his weight loss in addition to connecting with a deeper understanding his relationship with food.

“I looked at why I used food as a coping mechanism. Mindful meditation was really important for me — just taking a few moments to practice breathing,” Dustin explained.

Raquel, who suffered from polycystic ovary syndrome (PCOS), a condition that makes it harder for women to get pregnant, says seeing her husband shed the weight was a motivation for her to join in. 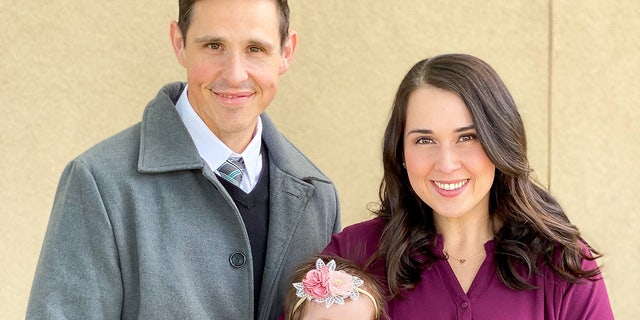 Raquel and Dustin were able to have a baby after seven years of struggling to conceive.
(SWNS)

“He already had a six-pack by the time I started. It really hit me when all of a sudden he weighed less than I did. I didn’t want that,” she said.

Like Dustin, Raquel had gastric bypass surgery and went on a low-carb diet. She also started going to the gym six times a week.

Soon the couple’s dates involved exercising together instead of going out to eat. Raquel’s exercise and diet regime took her from 298 pounds to 183 pounds.

Despite their weight loss success, the couple was still astonished when Raquel became pregnant.

“We randomly took a test and it showed a very faint second line,” Dustin said, adding that they decided to get a second test to confirm it was positive.

“My eyes lit up, I looked at my wife and I was speechless,” he said, convinced the weight loss journey is what helped them be able to conceive.

“My pursuit of getting healthy was so that I would be able to pick up my child and get down on one knee to play with her,” Dustin said.

Raquel added: “Losing weight allowed me to get a life I didn’t know I could have. It is still the most amazing dream and even better than I imagined.”

Down Over 65% From Its Highs, Is Skillz Stock Finally Cheap?

Down Over 65% From Its Highs, Is Skillz Stock Finally Cheap?