Muse’s Matt Bellamy: “We’ve gone back to our safe space”

Crimson curtains, leather armchairs, black-and-white zigzag flooring: The 44-year-old frontman of one of England’s biggest rock bands reproduced every detail of the otherworldly chamber from the cult-fave TV show he remembers devouring during Muse’s first tour on a bus back in the early 2000s.

“It just sets a certain tone, you know?” he says, looking around the space with obvious pride on a recent afternoon.

Yet as Bellamy sat composing amid a thicket of electric guitars and vintage synths — including an old Roland model he says was the same used for the “Stranger Things” theme — what really inspired him was the tumult unfolding outside the studio, which he observed through an enormous one-way mirror in the building’s front wall.

This was mid- to late 2020: Bellamy, who’s written for years about the menacing encroachments of technology and government, watched (without those on the street being able to see inside) as shops went out of business during the pandemic, as Black Lives Matter protesters marched through the city, as riot-gear-clad police and National Guard moved in to shut down demonstrations, as a man took up residence in a car parked right in front of the studio. Helicopters seemed to be circling constantly; a drone hovered over Bellamy one day as he loaded gear in through a back door.

“It was like being inside a scene from ‘RoboCop,’” he says now. “All the anxieties and the dystopian strangeness that had always been kind of speculative in our music — suddenly it felt like it was all coming true. It was actually happening.”

The result of his observations is Muse’s ninth studio album, “Will of the People,” on which Bellamy rhymes “a life in crisis” with “a deadly virus” and “tsunamis of hate are gonna drown us.” (Sample song titles include “Kill or Be Killed” and “We Are F—ing F—ed.”) But if the LP confronts a brave new world, it also knowingly looks back: Musically, the band — rounded out by bassist Chris Wolstenholme and drummer Dominic Howard — dials down the fluorescent electro-pop vibe of 2018’s “Simulation Theory” in favor of the harder, more guitar-oriented sound that made Muse a prog-metal sensation more than two decades ago.

“We wanted to get back to what made us Muse in the first place — what the best and the worst parts of us are,” Bellamy says, then laughs. “I mean, ideally we focused on the best.”

Muse performs in Philadelphia in 2013.

What are those so-called worst parts of Muse?
Probably a tendency to veer off and experiment in areas that we’re not very experienced in. Most of [2012’s] “The 2nd Law,” for instance — classical dubstep, weird clarinet solos, whatever else is on that album. I think we felt we’d achieved so much with [the 2009 hit] “Uprising” that we could do no wrong. Obviously, we could.

You produced “Will of the People” yourself after collaborating with the producer Shellback on “Simulation Theory” and with Mutt Lange on 2015’s “Drones.”
With people like that who are so successful, I think sometimes we’ve gone in the studio and been a little bit like, “OK, we’ll do just whatever you say.” In hindsight, I wish I’d been more involved and put more of our stamp on it. So we’ve kind of gone back to our safe space on this album. If we’re in complete control, it may not be the most cutting-edge or the most modern-sounding thing, but it’s the only way to guarantee that we’re gonna love it.

Did recording during COVID speed up the process or slow it down?
It made us move quicker. We’d finished our last tour at the end of 2019, then I had a baby [with wife Elle Evans] in June 2020. So the plan was to take all of 2020 off, enjoy our families, then come back together in 2021 for some festivals and use that to get back into shape to make an album in 2022. But the pandemic — especially for me and Dom, because we were here in L.A. — it made us want to just get on and do something. 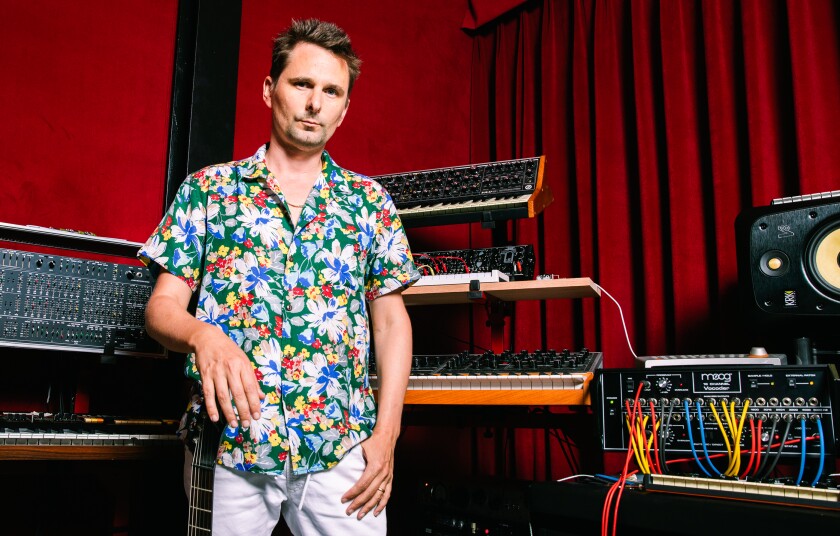 “To me there’s a fighting spirit in [our] music, which is a form of optimism,” says Matt Bellamy. “It’s like the moment in ‘Rocky’ when Adrian tells Rocky to win.”

June 2020 was a heck of a time to bring a baby into the world.
I came to America in 2010 as a single person looking to experience L.A. for a bit — and, boy, have I had an experience. Ended up with a Hollywood actress [Kate Hudson], had a baby together and the whole cliché scenario of the ups and downs of celebrity life. Then married a Texan [model Elle Evans] and had another baby. Been evacuated from my house during wildfires. Then the pandemic and the full January 6 Trump meltdown. It’s just been an unbelievable period to be here.

“Will of the People” suggests it hasn’t left you terribly optimistic about the future.
It depends what your definition of optimism is. To me there’s a fighting spirit in the music, which is a form of optimism. It’s like the moment in “Rocky” when Adrian tells Rocky to win.

Do you think it’s clear to listeners who you’re fighting? In the new song “Compliance,” you’re singing sarcastically about people falling into line and doing as they’re told. It could be interpreted as an anti-woke anthem.
I never thought about it that way. I thought about it in terms of the rising authoritarianism that we’re now seeing is a real thing — Trump in this country, but also Putin and the China situation. These ideologies, I feel like we kind of tested the waters in the 20th century and realized that fascism and communism are both just absolute disasters and that we don’t need to go near that stuff ever again. And yet it’s emerging.

What’s your reaction to that?
I have an anti-authoritarian nature. My parents say that when I was a young child I was never very good at being told what to do. I don’t like the idea of vast centralized power that’s very far away from where I live. I come from Devon in England, which is a couple hundred miles from London. But when I went to see where my wife’s from in Paris, Texas, it’s like, Holy s—! It’s thousands of miles from the places of power in America. So the resistance to someone deciding how I should live who has no idea what my day-to-day life is — I can understand it, even though there’s a risk of it being hijacked by more extremist factions that have gone down roads I don’t agree with.

Have you considered becoming a U.S. citizen?
I have. Overall, I actually think the United States’ structure is really amazing, with all the different ways to make laws at the local level. It seems like every month my wife is voting on some sort of proposition. I’m looking at that going, Wow, England is so behind on that front. We don’t ever get to vote on policy.

The oddest thing about that late-2020 period where things in America and California seemed so chaotic and crazy was that I felt my connection deepening. There’s something going on here that is critical to what’s happening in the entire world. America has become a kind of center point for this idea that there’s an empire on the verge of collapse, and how do we save it? Or how do we know which parts to save and which parts to let fall away?

For some people — Dom, to some extent — it made them want to get out. But for me it had the opposite effect. It’s everything I’m interested in, and it’s massively creatively inspiring.

Has becoming wealthy shaped your political views?
I don’t think so. I remember all my feelings of what it was to be from a poor rural background with no opportunities and all the disadvantages. And I still have some views that would be considered pretty socialist by some. Universal health care is an obvious one; I can’t even believe there’s not universal healthcare here. I’ve also come to the view that maybe land shouldn’t be privately owned.

Can you relate to music that’s unambiguously joyful? Coldplay, let’s say.
Absolutely. Chris [Martin] is a friend of mine. I love what they do. I wish I could write more songs that enter the love sphere. But I think it might be against the nature of the sounds our band makes. When the three of us are jamming, it’s like Rage Against the Machine riffs are coming out all the time. I can’t imagine hearing those riffs with Chris Martin singing about peace and love on top.

What’s the happiest Muse song?
“Starlight” is pretty positive. I think “Verona” on the new album is pretty nice — little bit of “Romeo and Juliet” in there.

Do you think rock music is in good hands with the generation behind yours?
My 11-year-old son likes Slipknot and Metallica. My stepson Ryder from a previous situation [with Hudson], he’s 18 and he’s really into rock. He turned me on to Willow Smith.

Can you envision touring in your 60s and 70s like Paul McCartney and the Rolling Stones?
Yeah, but Metallica is the one that’s really made me think we could do it. The Stones and McCartney, they have universally uplifting music. But Metallica — I’m not sure how old they are, but they’re up there — that’s really heavy music and they’re still out there. The great thing about rock is that, even though the genre is largely irrelevant in the mainstream, you can actually grow old with it. You can make a real life career.

The Signs Of Hearing Loss You Shouldn’t Ignore

Meta’s Next VR Headset Is Coming In October: What We Know About Meta Cambria, aka Quest Pro

Meta's Next VR Headset Is Coming In October: What We Know About Meta Cambria, aka Quest Pro