Inside the Inflation Reduction Act: $20 billion to help fix our farms

Farms cover roughly 40 percent of the country, and they’ve replaced countless ecosystems with vast fields of soybeans, corn, and cattle. Agriculture also accounts for about 11 percent of US greenhouse gas emissions.

The Inflation Reduction Act could help blunt some of those impacts.

Alongside more headline-grabbing investments in clean energy and health care, the bill — which President Biden is set to sign into law this week — includes nearly $20 billion to make farmland more environmentally friendly. The funds are designed, in part, to help farmers create more habitat for pollinators like bees, store more carbon in the soil, and make farms more resilient in the face of extreme weather.

Farmers working in a strawberry field near Ventura, California, during a drought in August.

Funding for farms is just a fraction of the $437 billion bill — and it only goes toward existing government programs — but it’s still a huge deal, experts say. “$20 billion is still a big investment, the largest since the Dust Bowl of the 1930s,” Karen Perry Stillerman, a deputy director at the research group Union of Concerned Scientists, wrote in a recent blog post. “It’s $20 billion more than we had two weeks ago,” she wrote.

And this investment is especially important today. Climate change is threatening crops by making some droughts and flash floods more frequent and severe. Many of the programs funded through the IRA don’t just target carbon emissions but could also help make our food system more resilient. Ultimately, that would benefit us all.

What the bill means for farmers

The biggest chunk of money — roughly $8.5 billion — will go toward a program run by the US Department of Agriculture called the Environmental Quality Incentives Program. It pays for projects that restore the ecosystem or reduce emissions on farmland.

Farmers often use the money to buy and plant cover crops. These are plants, such as clover, radishes, or rye, that are rooted in fields that might otherwise be fallow to improve the health of the soil and prevent erosion. The idea is that the ground is always “covered” with something.

Cover crops also have a range of other superpowers, said Rob Myers, director of the Center for Regenerative Agriculture at the University of Missouri. During a drought, for example, they can lock moisture in the soil; during a flood, meanwhile, they help water more easily penetrate the ground.

These plants also provide habitat for important critters above and below ground, such as spiders, beetles, and fungi — many of which provide services themselves, like pest control. Generally, more plants mean more animals. 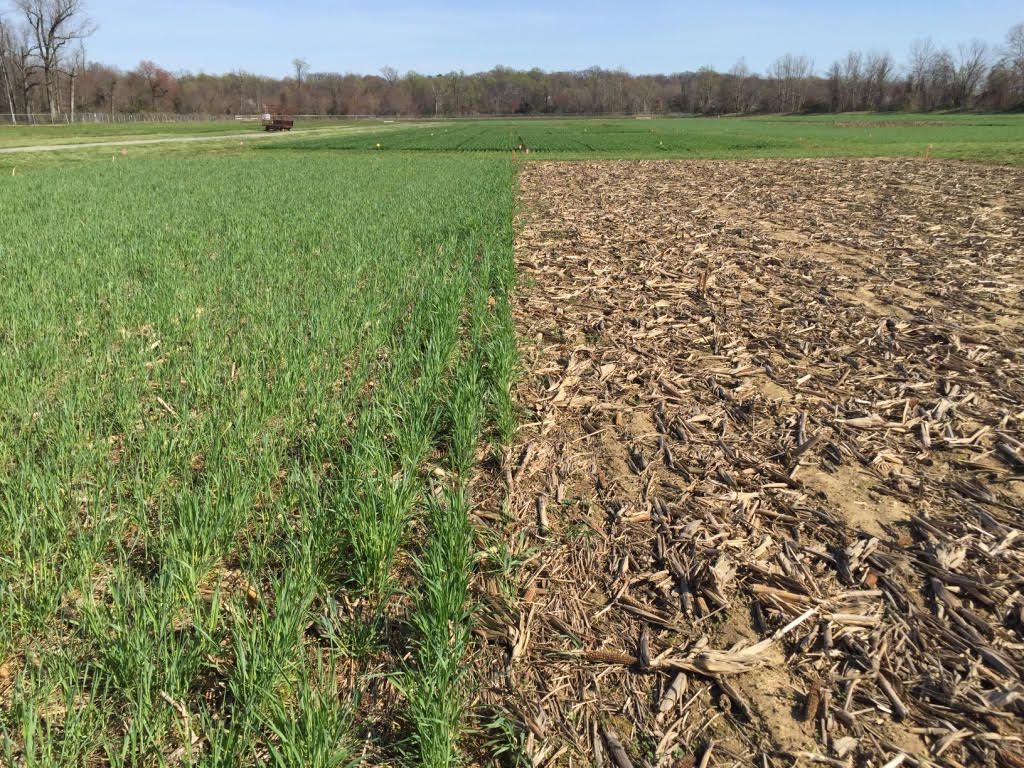 On the left is a field with cereal rye, a cover crop, and on the right is a field with no cover crop. “The soil on the left with cover crop will be healthier and more resilient in the face of weather extremes such as droughts or excessive rainfall,” according to Rob Myers, director of the Center for Regenerative Agriculture at the University of Missouri.

Although just a small fraction of farms currently use cover crops, Myers said, programs like EQIP are making the practice more common. Planting them can be costly, and they take about three years to start paying off (such as by reducing the amount of fertilizer a farmer needs to buy), he said. That’s why government investment is so important, he said.

3 other important programs the bill funds

The IRA will also funnel more than $3 billion into another USDA initiative known as the Conservation Stewardship Program (CSP). Similar to EQIP, CSP pays farmers to make their lands more sustainable, but it typically provides funding over a longer period and for a larger suite of conservation-related projects, said Cathy Day, climate policy coordinator at a nonprofit called the National Sustainable Agriculture Coalition.

What does that actually look like? Through CSP, a farmer could transform an industrial farm, with rows and rows of the same crop, into something that resembles a more natural landscape, Day said. Such a farm might have a handful of different crops, including fruiting trees and plants that enrich the soil, and require fewer fertilizers and pesticides. That’s a best-case scenario, anyway.

There’s money in the act for two additional programs, both of which are worth knowing: the Regional Conservation Partnership Program and the Agricultural Conservation Easement Program.

The regional partnership program — which will receive $4.95 billion — is similar to those above but relies on partners, such as environmental nonprofits, to help make farmland more sustainable. Another $1.4 billion will go towards the easement program. It ensures that farmland won’t be replaced by roads, cities, or other developments.

Is this really good for the climate?

These programs are, by design, meant to help fight climate change as part of Biden’s broader climate agenda. And some of them almost certainly will. Cover crops, for example, can pull carbon dioxide out of the air and store it in the soil, as long as farmers don’t dig up the roots, Day said.

Yet it’s tough to say whether, on the whole, $20 billion in funding will make a dent in farm-related emissions. As Vox’s Kenny Torrella argues, the bill will do little to change meat and dairy production, the largest contributor of carbon emissions in the agriculture sector.

Historically, about half the money from EQIP has gone toward livestock farms including confined animal feeding operations, Day said. Funding from IRA might help those farmers cut emissions to a degree, but it will also help prop up a polluting industry, she said. “It’s inherently supporting systems that are highly environmentally unfriendly,” Day said.

Other provisions of the bill also direct money toward biofuels, which some experts have criticized for fueling environmental destruction and doing little to lower emissions. Remarkably, about a third of the corn in the US (most of which is grown in vast, largely lifeless monocultures) goes toward making ethanol.

Ultimately, slashing emissions from farmland will require more fundamental changes to our food system and a major investment in plant-based meats and other lower-carbon alternatives. But in the meantime, this bill presents an opportunity to restore some farmland — to bring back certain natural features of the landscape that make it more resilient.

“The average person might think that what farmers are doing is unrelated to them,” Myers said. “But it is important because we all need a stable supply of food.”