Kenny Loggins had already established himself as a pop star — first as half of the rootsy Loggins & Messina, then as a yacht-rocking solo act — by the time he became the unofficial king of the movie soundtrack in the early 1980s. There was “I’m Alright,” from “Caddyshack.” There was the title track from “Footloose.” And of course there was 1986’s “Danger Zone,” the fighter-jet-inspired anthem from “Top Gun” that hit No. 2 on the Billboard Hot 100 and helped propel the film’s soundtrack to sales of more than 9 million copies.

This week “Danger Zone,” which was composed and produced by disco pioneer Giorgio Moroder with lyricist Tom Whitlock, returns to the big screen as part of “Top Gun: Maverick,” the long-delayed sequel starring Tom Cruise in an older version of one of his most iconic roles. For Loggins, 74, the movie comes as he’s preparing to release a memoir, “Still Alright,” and reunite with Jim Messina for two gigs at the Hollywood Bowl on July 15 and 16. He called the other day to remember revving up his engine and listening to her howling roar.

Were you up on Giorgio Moroder’s music before you did “Danger Zone” together?
No. He was a really strong writer — a force in that era — but I didn’t know it until we got into “Top Gun.” In my world, Giorgio was well known only in that he used the Yamaha DX7 right out of the box. This was one of the first super-popular synthesizers in pop music, and all the sounds he used were stock sounds that came with it. We were all trying to create custom sounds, something unique, and he just plugged it in and made a s—load of hit records.

What does that say about him from a musician’s perspective?
That I was taking too long and spending too much money.

It’s well known at this point that a number of other singers were in line to do “Danger Zone” before you.
Kevin [Cronin of REO Speedwagon] told me he passed because the high notes were too high for his voice. I was lucky that I could still hit those notes back then. I have a feeling that Mickey Thomas from Starship was probably the first choice. He just had that sort of white R&B/rock voice — and all the high notes in the world. But I think the lawyers couldn’t come to terms on it, and that’s why it went up for grabs.

Can you hit the high notes now?
I can hit them now. I’ve been studying with a vocal coach for over a year to make sure I’m singing in a way that doesn’t tear my voice up. I had to relearn how to sing in a bel canto form that gets the sound off the vocal cords and up above it. As you get older, your vocal cords get drier. Things atrophy. By 2020 I couldn’t even hit the high note in “Danny’s Song.”

Kenny Loggins arrives at the premiere of “Top Gun: Maverick” on May 4 in San Diego.

You write in your book that you were emulating Tina Turner when you recorded “Danger Zone.” What grabbed you about her singing?
She had adopted a rock attitude that was so aggressive — the tone and where she was singing in her throat. And her pronunciation of words. I think you can hear it mostly with the way I say “danger zone” — that’s the way Tina would’ve pronounced it. One of the things that movie songs gave me the freedom to do was to be whoever I wanted to be, because it wasn’t really a Kenny Loggins thing. It was a movie thing. And if the movie flopped, no one would ever hear it. So just go for it. See where you can take it.

Was this one of those sessions where you do 50 takes of the vocal?
Much quicker than that. Giorgio had to dub the song into the movie within 24 hours, so there was an urgency to getting in the studio. We were in there to get this sucker done.

You’re pretty generous in the book about not being credited as a writer on “Danger Zone,” even though you made significant contributions to the song. You write that Moroder and Whitlock didn’t cut you in because of a rule regarding Oscars eligibility.
I couldn’t argue with that. Plus, it wasn’t my baby. I didn’t bring the idea into the room. It was Giorgio’s idea, and I was f—ing with [his song]. And he let me because he respected me. He could have gone, “No, no, no, the song is what it is.” But to my ear, it needed help. Not a lot, just some tweaking to make it a little more interesting in a chordal sense. And to have that bridge go somewhere. The middle eight bars should do something that relieves the tension — gives the listener a break for a minute and then takes you right back in. That’s what I added to the tune.

Somebody else might’ve threatened to sue.
I’m not a litigious person. I tend to want to avoid that s— whenever you can. It can be the door to the abyss.

It’s kind of funny that the music for “Top Gun,” this most indelibly American of movies, was spearheaded by an Italian guy in Moroder and a German guy in Harold Faltermeyer, who scored the film.
I’ve never thought about that before. Tom really … utilizes, shall we say, the American military connection to the movie. But in the new one I think it was a wise decision not to identify the enemy. The planes have no markings. The uniforms have no markings. They’re just the bad guys who are building up nuclear stockpiles, and we have to stop them. It’s not the American military that’s overthrowing the government somewhere.

One reason Mickey Thomas is said to have turned down “Danger Zone” is because he thought the original movie was too jingoistic. Was that concern in your mind?
No. To me, it was just an adventure movie. But when CNN took “Danger Zone” and used it as background music for the bombing of Iraq, then I pulled the song out of my show. To me, that went over the top. I didn’t want to be the guy who wrote the theme song to World War III. When I finally brought it back into my show, I tried to redefine the song as being about living on the edge of excitement. I put in extreme-sports footage — people jumping out of airplanes, snowboarders doing 360s. The lyric is about characters that do that.

Do you think you’ve been successful in rebranding the song?
I don’t. But for me, how I can perform the song, I want to hold it that way. 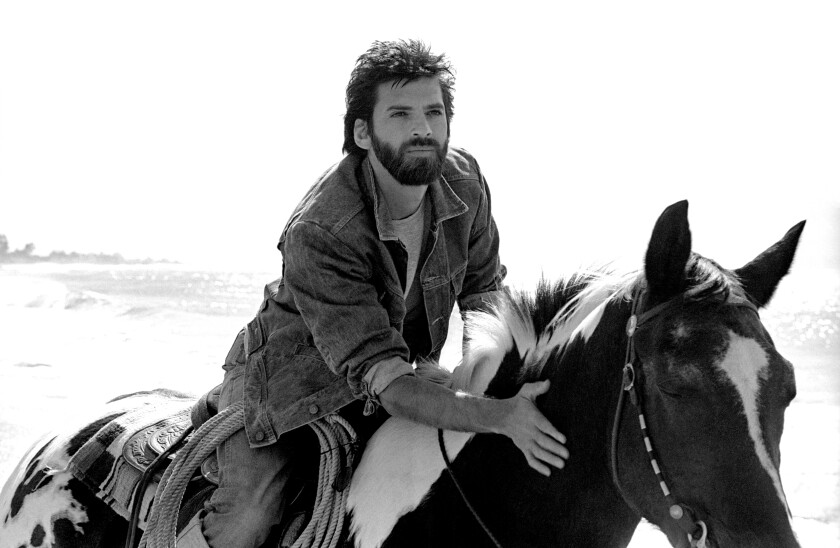 Kenny Loggins rides his horse on the beach in Los Angeles, 1985.

You’re not doing a whole lot in the music video for “Danger Zone” — basically lying around in a bedroom with a ceiling fan.
That was Tony Scott. I was lucky to get to use the same director as the movie. How often does that happen? And that was his vision. He just wanted a smoky room, don’t make too much production out of it: “We’re gonna use a lot of footage from the movie, so just show Kenny being thoughtful.”

So that’s what you’re doing.
I’m really not sure what emotion I was supposed to be portraying. The sunglasses and the fan were the most important elements.

Did the success you had in Hollywood change your ideas about celebrity?
Well, I never really became a part of Hollywood. Music is the last thing they think of; it’s really the bastard stepchild of the movies. I didn’t even get an invitation to a party.

Ever consider acting?
Barbra Streisand asked me if I was interested. She and I had really clicked when we were working on tunes together for “A Star Is Born.” That’s when I met Jon Peters, who was her boyfriend at the time. He’s in the kitchen cooking, and Barbra and I are just jamming on bits and pieces of song ideas. He’s noticing how much we’re laughing together, and she says, “Have you ever thought about acting?” I said, “No, it’s not my thing,” and that was the end of that conversation. I did ask Tom if they would consider putting me in a uniform and having me walk through a scene [in “Top Gun: Maverick”] as a joke. But they had bigger fish to fry.

Where does “Danger Zone” place on the list of your most lucrative songs?
Depends how “Maverick” does. But, you know, with streaming today, revenue streams are so dramatically different. Back in the day we had a soundtrack album, we had a single, we had airplay — there’s no such thing as airplay anymore. It all depends on how it streams and if it gets picked up again as a pop-culture zeitgeist thing. I’d say “Footloose” is probably still on top of the list. “Danger Zone” is two or three.

What are some other reliable revenue streams?
Corporate gigs — those pay more than what you get when you play a performing arts center or something. But I live off my publishing. That’s the thing I can count on from year to year. When 2020 happened, there was no other revenue — couldn’t do any performances. I have five kids and three grandkids I’m still helping somewhat financially. A couple of my kids went to college; my first daughter went to Wesleyan. That’s a pretty deep bite.

How’s the vibe at a corporate gig?
When you’re the performer at the end of a weeklong conference, sometimes it feels like people wish they could just go home and not have to stay for the meeting where you have the special guest. And quite often they want the performer to be a surprise. So you’d better hope people like the surprise.

How Did Balletcore Permeate The Mainstream?

Top 33 Quotes for parents out of gratitude for thanksgiving

Top 33 Quotes for parents out of gratitude for thanksgiving