What is overlanding? What gear does it require?

Last holiday season, Tom Standish put nearly all of his belongings in long-term storage, leased out his Oregon house and, with his wife, toddler and newborn, traded in suburban life for one on the road.

The family’s new digs for the next four years or so: a luxury overland adventure vehicle called an EarthCruiser FX that combines premium accommodations — albeit in 88 square feet — with hardcore off-roading capabilities. Starting price for the boxy behemoth: $439,000.

So far the Standishes have driven 10,000 miles, visiting large swaths of the Southwest and the Pacific Northwest before crossing the Canadian border, where they’re exploring British Columbia. Their snapshots from the journey — the EarthCruiser perched on a rocky ledge at Vermilion Cliffs in Arizona, or blending in against the brilliant white expanse of the Bonneville Salt Flats in Utah — look like something out of a Patagonia catalog. They plan to take the EarthCruiser down the Baja California Peninsula in December and then ship the 6-ton rig by boat to Belgium so they can use it to traverse Northern Europe next year.

“At this point, we’re in the vehicle full time. We’re going all in,” said the 36-year-old Standish, who retired after founding and selling a Los Angeles clothing manufacturing company; he is now a commercial real estate investor. The $6,000 transatlantic shipping fee is “a big barrier to entry,” he acknowledged, but the family is earning income from their rental property and saving on hotel bills. “The kids are young and they’re not in school yet, and we have this limited amount of time where we can do this and not be grounded.”

Not quite #vanlife (which is more bohemian) or glamping (rooted in opulence; no car needed) or touring in an RV (cushier and confined to paved roads), overlanding is loosely defined as a self-reliant way to explore rugged terrain and undeveloped areas in a specialized vehicle for a sustained amount of time.

The parameters, already wide, are broadening as newcomers flood the market: Enthusiasts can purchase top-of-the-line turnkey rigs that cost $2 million, or convert their four-wheel-drive Subarus and Toyotas into overland-capable vehicles with rooftop tents, off-road tires, portable fridges and suspension lift kits. There are budget do-it-yourselfers who make incremental modifications over several years, and a growing crop of vehicle outfitters who will do it for you. Some enthusiasts consider overlanding a long-weekend hobby; others orient their personal lives — and now, thanks to policies allowing remote work, their day jobs too — around chasing the next epic adventure on wheels.

Popular for decades in Australia and Europe, overlanding was making inroads in the U.S. over the last decade before the pandemic pushed the budding sector into overdrive.

“Everybody was grounded, nobody was able to fly, so what are your options? You’re going to drive somewhere,” said Tim Nickles, founder and chief executive of Roofnest, which makes $3,000 to $4,000 hard-shell rooftop tents for overlanders and campers. The Boulder, Colo., company saw its annual sales soar 400% to more than $10 million last year.

“The combination of everybody wanting to be outdoors and only able to travel by car was essentially a perfect recipe for overlanding,” Nickles said. 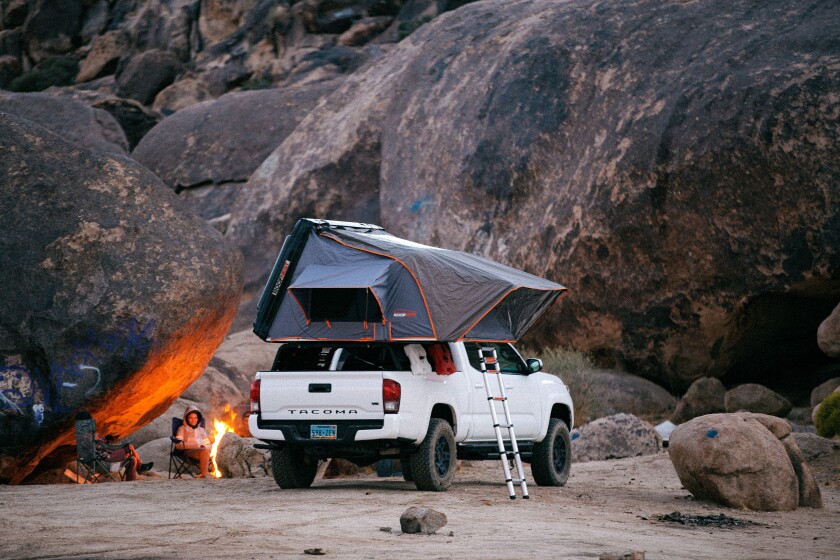 An April report by a trade association for the motor vehicle aftermarket noted that although new-car sales declined nearly 15% in the U.S. last year, truck and SUV sales remained relatively healthy. One bright spot: overlanding, which the group called “arguably the ultimate four-wheeled form of social distancing.” The sector has “exploded” and industry watchers expect consumer interest “to remain strong in the coming years,” the report said.

Lance Gillies, co-founder and chief executive of EarthCruiser, said there is an existential component to the emerging trend: “People have decided, more and more, that life is short. COVID really brought that home — our time is really not ours the way we thought it was.” 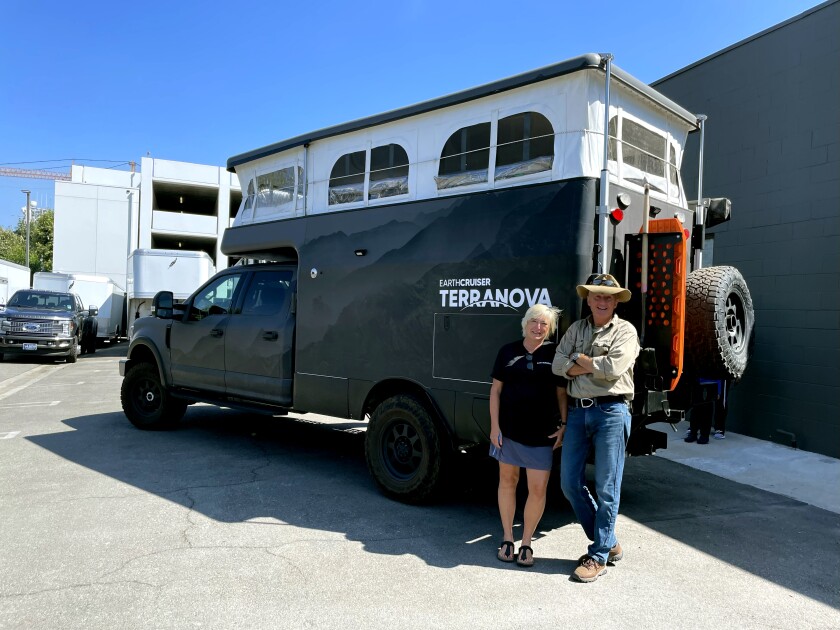 With three models that start at $289,000 and such accouterments as queen-size beds, kitchenettes, water filtration, solar panels, mood lighting, tile backsplashes and bathrooms with showers, EarthCruiser caters to the wealthy overlander. The 13-year-old company produces just a few dozen of its highly bespoke expedition vehicles from its Bend, Ore., headquarters annually, but it plans to up that to at least 100 next year to meet demand. Revenue increased 40% in 2020 and is on pace to do the same this year.

The whole outside world is our bedroom. We’re going as far as we can with this.

— Tom Standish, 36, who is on a multiyear around-the-world overlanding trip with his family

The pandemic also introduced an unexpected aspect to overlanding: the ability to work from the road. For years, a fundamental tenet was to be largely free from the obligations and gadgets of traditional life; enthusiasts emphasized being unreachable while they were away.

Now, remaining on the grid is part of the allure, especially as more millennials take up the activity (overlanding was once considered a rich retiree’s domain). So vehicle makers are adding Wi-Fi and satellite connectivity and pivoting their marketing pitches: “We help people collect experiences while earning a living,” Gillies said. The company’s vehicles, designed to fit into shipping containers, can be considered “a mobile office that is not limited by continent.”

That’s the way Matt Jacobson uses his EarthCruiser, motoring it around the Southwest and Montana over the last year and a half while still putting in his hours as Facebook’s creative director of augmented reality.

“We were in the mountains near Bryce, beautiful, and I had my iPad and I was doing a Zoom call,” said Jacobson, who lives in Manhattan Beach. “We felt so lucky to have it during the pandemic. We’re talking about shipping it to Iceland or shipping it to the Florida Keys. We treat it like a land yacht.”

Still, he noted, a reliable signal can be hard to come by.

“We learned a very expensive lesson with satellite internet connectivity. It just gets really expensive really fast, like, un-usably so, to the point where I couldn’t turn the thing off fast enough,” Jacobson, the eighth employee at Facebook, said. “You could burn through thousands of dollars of data charges in one afternoon. It’s meant for, like, you’re at a remote oil rig and someone’s arm has fallen off and you need someone to show you a video of how to put it back on.” 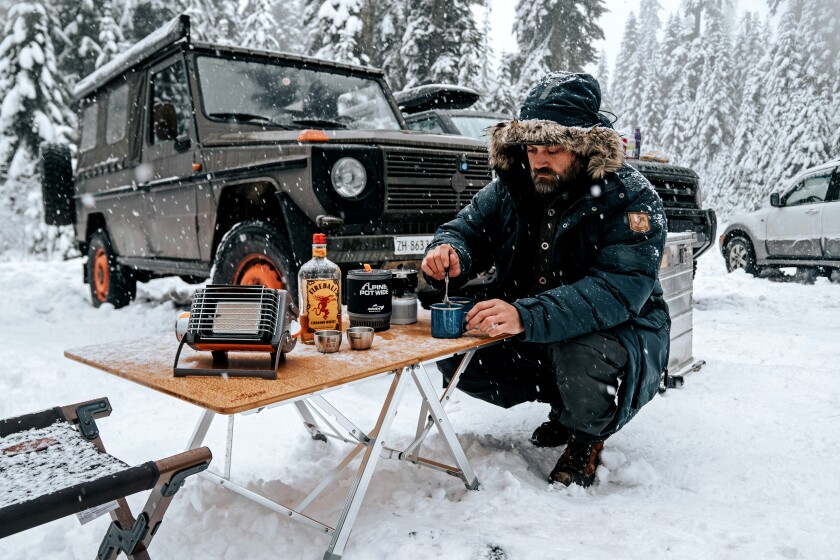 Josh Ashcroft during an overlanding trip to Gifford Pinchot National Forest in 2019. Ashcroft, 42, has bought four Land Rovers since he took up overlanding a decade ago, modifying each for rugged off-road expeditions.

Since he began overlanding a decade ago, Josh Ashcroft has bought four pre-owned Land Rovers and spent several thousand dollars modifying them for the backcountry. He has powered the vehicles through deep snow in search of the perfect Christmas tree in Gifford Pinchot National Forest in Washington and onto a dry lake bed in southeastern Oregon during a weeklong caravan trip with his buddies.

Ashcroft, 42, likes the solitude and the freedom that come from not being limited by campsite availability and established roads, as well as the ability to work while traveling — though, he said, “I’m a bit conflicted about it.”

“Part of overlanding was to get out and enjoy nature, so you have to be a bit disciplined,” said Ashcroft, who lives in Portland, Ore., and owns an outdoor equipment company. “Otherwise you get sucked back into the same thing, just in a different environment.”

As the vehicles have evolved to become work-life spaces, and as some pandemic travel bans and restrictions remain in place, outdoors-oriented retailers and accessories makers are targeting the fast-growing DIY community with more sophisticated aftermarket products.

“Building your overland vehicle is an experience,” said Lindsay Hubley, managing partner of the Overland Expo, an annual event series for outdoor adventure buffs. “Customization is a big part of the culture: outfitting your vehicle for what you envision your off-road adventure to be.”

After canceling all 2020 in-person events because of the pandemic, Overland Expo will produce three shows this year for the first time — in Colorado, Arizona and Virginia — totaling 840 exhibitors and an estimated 57,000 attendees. Besides checking out the latest vehicles and accessories, participants (about a third of whom will be expo first-timers) can sign up for outdoor classes and hands-on training to learn how to properly maneuver their rigs over tough terrain. Booth space sold out months in advance, with more than 100 brands on the waiting list.

The combination of everybody wanting to be outdoors and only able to travel by car was essentially a perfect recipe for overlanding.

REI has made a big push into the overland accessories market in recent months, with a focus on novice overlanders who don’t have purpose-built vehicles and are looking for “hackable” ways to enhance their experience. “It’s core to our strategy,” said Paul Calandrella, general merchandising manager of camp products for the retailer.

During the pandemic, REI redesigned the overland camping section of its website and has seen a surge in related sales, especially for attachable shelters, large-format sleeping pads and blankets, pizza ovens and cookware. Rooftop tents have recorded triple-digit growth year over year for the last three years, Calandrella said, and “furniture has been off the charts for us.”

He said REI is carefully following the latest improvements in portable Wi-Fi hot spots, satellite equipment and large batteries, products that the company expects will be in high demand among overlanders in the coming years.

A showcase for compelling storytelling
from the Los Angeles Times.

“Remote work has accelerated this ability to be a permanent nomad,” Calandrella said. “We’re thinking about connectivity. Technology is a place we’re monitoring to understand the trend and to learn how best to serve somebody that’s in that mode.”

So far, the nomadic lifestyle is suiting the Standishes well. The family of four spends the mornings hiking, paddling and swimming before hitching their bikes to the back of the EarthCruiser and driving a couple of hours to their next destination.

The kids — 2 1/2-year-old Ivy and 11-month-old Tom — adjusted to their new sleeping environment after a month and, other than a couple of colds and some trouble crossing the Canadian border, it’s been a smooth journey.

“The whole outside world is our bedroom,” Standish said. “We’re going as far as we can with this.”