A man who is in the process of biking to all 50 state capitals in the span of one year has reached his 10,000-mile mark in the Peach State — where busy highways actually led to a “close call” during his bicycle ride.

Bob Barnes, 52, of Syracuse, New York, had previously cycled through Georgia on his way to Florida and returned to reach his 32nd capital, Atlanta, on March 23.

Cycling through rough terrain posed a challenge, though it didn’t stop him from moving onward and encountering memorable Georgians along the way.

‘They thought I actually got hit’

Barnes had been optimistic about his trip through Georgia. He told Fox News Digital that the state turned out to have “the most challenging terrain of any state so far.”

“They took it up a whole other level,” he said.

Bob Barnes, 52, has been cycling to all 50 U.S. state capitals. He arrived in Atlanta, Georgia, on March 23. Atlanta is the 32nd capital he’s reached on his journey so far.
(Bob Barnes)

Georgia didn’t always have a shoulder for Barnes to ride on, so instead, he pedaled on the road.

Unlike in Mississippi, which Barnes originally thought was the toughest land to ride on, motorists in Georgia weren’t as willing to switch lanes and give Barnes space to ride safely, he found.

“I’ve never had a close call in my life on a bicycle, but I did in Georgia,” Barnes said. “I was in control, but it was still close.”

As Barnes cycled through southern Georgia, he heard a car coming up behind him. He looked back repeatedly to see if the driver was going to move over to give him room — but the driver never did.

“I’ve never had a close call in my life on a bicycle, but I did in Georgia.”

“The car didn’t move over, so I had to ditch it,” Barnes said — describing how he was forced to go off-road.

“It was so close that the car behind it chased the car down, got the license plate and then came back to see if I was OK,” Barnes added. “They thought I actually got hit.”

Barnes turned out to be fine. He said, “I was in control, so it didn’t really bother me that much.”

As he got closer to Atlanta, the challenges for him continued.

Barnes hit the road at 4:40 a.m. He said that during his first few hours, he did “30 miles of adrenaline-pumping bike riding” in the dark, amid the wind and pouring rain. 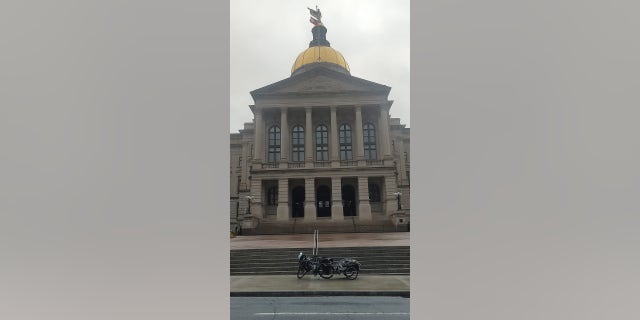 Barnes told Fox News Digital that cycling into Atlanta, for him, was made up of “30 miles of adrenaline-pumping bike riding.”
(Bob Barnes)

“At one point, I was on a five-lane highway with no shoulder,” he added.

Atlanta’s famous traffic made his ride more difficult, along with slipping pedals; he hadn’t changed his bike chains.

Bike chains are supposed to be changed out every 2,000-3,000 miles. Barnes’ bike chain, however, had about 7,000 miles on it before he changed it at a bike shop in Atlanta, he explained. 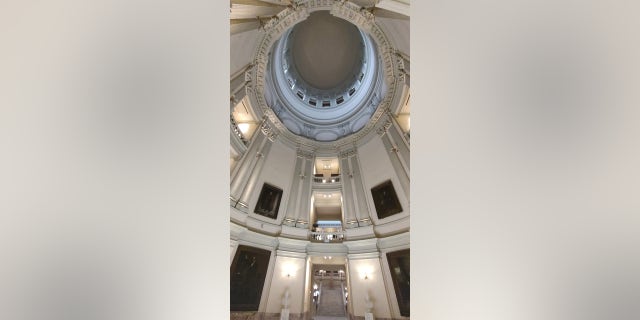 The interior of the Atlanta capitol is pictured; Barnes shared all the images within this article with Fox News Digital.
(Bob Barnes)

“That was irresponsible of me,” Barnes said. “And it put me in even more danger in that trip to Atlanta. I could have slipped and gone into the road, even. But it all worked out.”

“I’m guilty of not doing the maintenance until something goes wrong,” he added.

“At one point, I was on a five-lane highway with no shoulder.

Barnes was able to get a replacement chain, a new cassette on his bicycle, a new tire, a new pin in the front wheel and a brake adjustment.

Though the cycling was challenging, Barnes said the people of Georgia were “friendly” and “fun.”

As he biked through the state, he said he had four favorite places: Barnesville, Thomasville, Conyers and Washington.

“They’re just inviting,” Barnes said. “They all have a great vibe. You roll into town, and you just make yourself at home and poke around and everybody’s nice. I think the weather might have had something to do with it, too. But they’re all well-kept, maintained towns.” 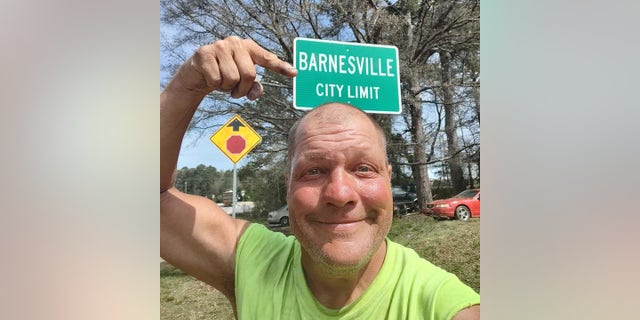 One of Barnes’ favorite towns in Georgia was Barnesville — due, in part, to the shared name.
(Bob Barnes)

In another town in Georgia, Barnes even got a moment to “pay it forward” to someone at a grocery store.

While he was getting in line for the cash register, Barnes noticed a teenager in line behind him holding flowers, so Barnes let him go in front of him. 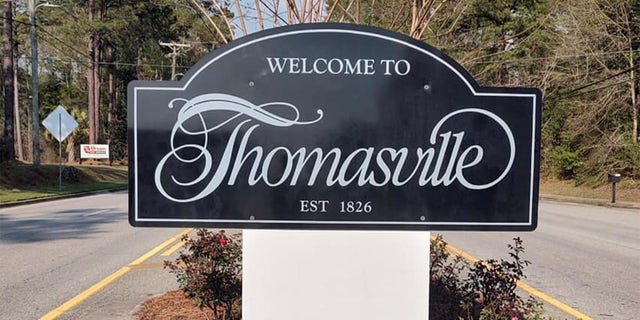 Barnes also enjoyed visiting Thomasville, Georgia. “You roll into town, and you just make yourself at home and poke around and everybody’s nice,” said Barnes of his favorite towns in Georgia.
(Bob Barnes)

The teen then realized he had forgotten his wallet.

As he was heading back to his car, Barnes approached him and offered to pay for the flowers.

Barnes said the cashier and the teenager were surprised by the offer.

“In my mind, if you think something, you’ve got to act on it.”

For Barnes, a memorable stay in Georgia was the night he spent in an abandoned barn in Colquitt County. 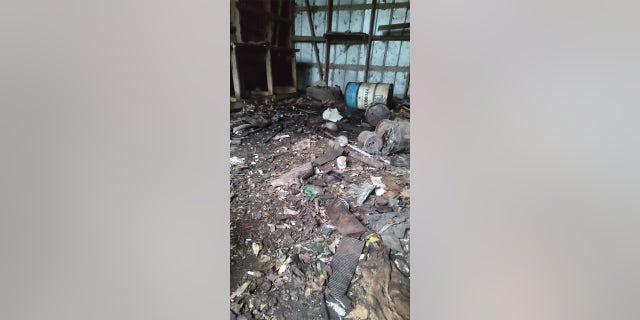 One night, Barnes spent the night in an abandoned barn (pictured here) because of a severe thunderstorm. “The barn was like my island,” he said.
(Bob Barnes)

Barnes said he decided to bunk in the abandoned barn that night because of a bad thunderstorm.

“I felt like a castaway,” Barnes said of staying in the barn. “The barn was like my island, and I’d poke my head out every so often.” 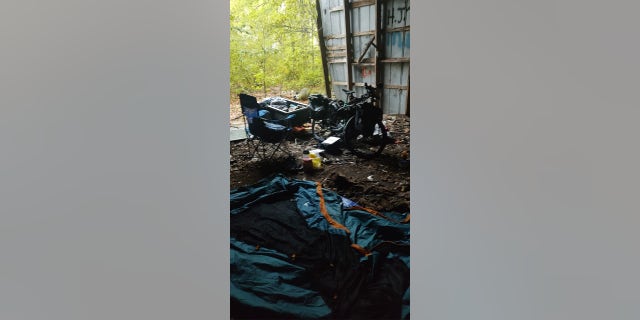 “It was weird at first, but I got comfortable in there,” he added.

Days later, Barnes stayed at a house on a dairy farm after connecting with relatives of some of his “Bibbery Travels” Facebook followers. 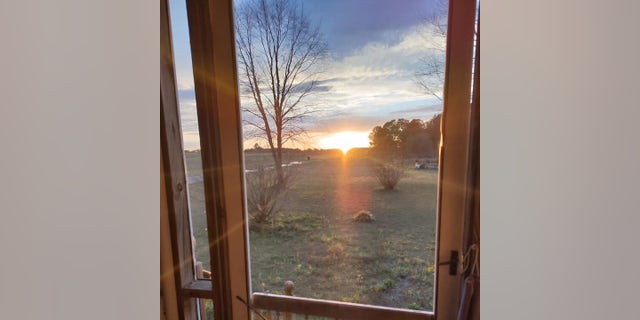 A few nights after he stayed in the abandoned barn, Barnes spent the night in a house on a dairy farm. The view from the house is pictured here.
(Bob Barnes)

Barnes had an entire house to himself and his host sparked a fire pit for Barnes to enjoy that night.

Barnes said it was surprisingly “anticlimactic,” but he did have “a sense of accomplishment” when hitting the marker. 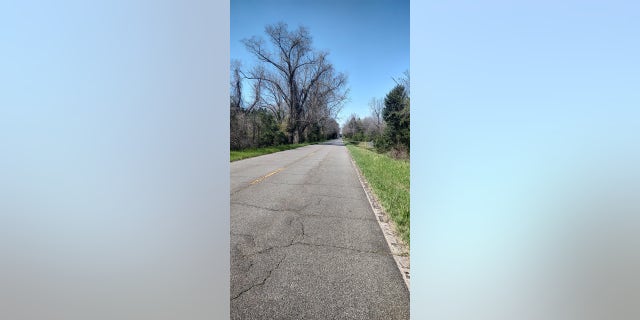 This is the picture Barnes took when he reached 10,000 miles on his trip.
(Bob Barnes)

When he spoke to Fox News Digital about his Georgia travels, Barnes had about 5,500 miles left on his journey.

“It’s really not [far] anymore, given what we’ve already done,” he said.

Barnes achieved another milestone while in Georgia; he reached his GoFundMe goal, which he said will fund his journey to Alaska, which is a peninsula bordering Canada.

Barnes will cycle to Juneau after taking a ferry from Canada.

From Juneau, he’ll fly to Hawaii and rent a bicycle that he’ll ride to the capitol at Honolulu.

After he left Georgia, Barnes headed to the Palmetto State for his 33rd capital, Columbia.

Fox News Digital has been following Barnes’ journey across America and detailing it for readers in this unique Lifestyle series. To catch up on his previous three trips before the one described here, read more below:

New York man biking across US ‘literally feels’ Alabama’s rich history: ‘You get the shivers’

New York man bicycling across US reveals his favorite state so far: ‘Feel at home’

60 ways to be healthier in 60 seconds

60 ways to be healthier in 60 seconds