Rick Owens and Aesop Want You to Feel Serene

It was a pulsating scene at Rick Owens’s latest womenswear presentation in Paris on Thursday, as models wielded handheld, gold-plated fog machines down the runway like post-apocalyptic thuribles, dispersing scented clouds through the Palais de Tokyo. But wrapped up in all that brutalist alchemy was something novel: the fragrance anointing the room, the show notes revealed, is from an upcoming collaboration between the designer and the cerebral Australian skincare-beauty brand Aesop. The two companies, according to an Aesop press release, found kinship in their steadfast sensibilities: “What might first appear a contradiction is soon revealed as a story of shared philosophies—a desire for serenity, a dedication to simplicity and an appreciation of considerate, nonconformist design.”

But this “meeting of uncompromising minds” is not without a precedent of admiration: Anecdotally, Rick has been candid about his love for Aesop products for years. Back in 2013, the designer told Harper’s Bazaar he prefers “Aesop for shampoos and moisturizers because it’s the only packaging I like. I would use lard if it came in a pretty bottle.” In 2017, the New York Times revealed that Owens “emits the delicious smell of Aesop face cream,” and a 2021 Vogue photoshoot of his Venice home exhibited a bathroom full of telltale amber dispensers. Ever wash your hands at a Rick Owens showroom? There’s a good bet you walked away smelling especially earthy and/or herbaceous.

“I am not sure if it was my body responding positively to the alchemy of the unguents they produce or my head responding to the quiet and gentle aesthetics of their ethos as a company, but Aesop’s balms represented a soothing mood that I wanted to continue seamlessly throughout my home life and my travel life,” said Owens, per the Aesop press release.

In turn, the collaboration centers on a travel kit containing pocket-sized versions of the designer’s favorite Aesop products—coriander seed body cleanser, Resolute hydrating body balm, and the classic shampoo and conditioner—that arrives swaddled in a cotton jersey wrap featuring an Owens-coded grosgrain strip, for $190. On Instagram, Owens detailed his intention behind the wrap, conjuring the threadbare T-shirts seen on Sid Vicious and in Satyajit Ray’s films, the draped jersey dresses of French couturier Madame Grès, and the fabric clinging to the goddess Nike in the Hellenistic statue Winged Victory of Samothrace, which graces the top of the staircase at the Louvre. He added, in his native caps lock, “A GARLAND OF THIN COTTON JERSEY IS MY VERSION OF A LAUREL WREATH OR OF A SATIN GIFT BOW.”

The travel kit also debuts the Stoic Eau de Toilette oil, which was developed with perfumer and longtime Aesop collaborator Barnabé Fillion to distill the brands’ dynamic partnership; the fragrance’s “spicy aromas of black pepper and coriander seed reflect the radicality of Rick Owens, while frankincense and woody notes conjure the equanimous spirit of Aesop,” all tied off with a binding note of patchouli. There are also Stoic-scented candles housed in ceramic vessels inspired by the sculptures of modernist Constantin Brancusi and Dadaist Hans Arp, available in three sizes. 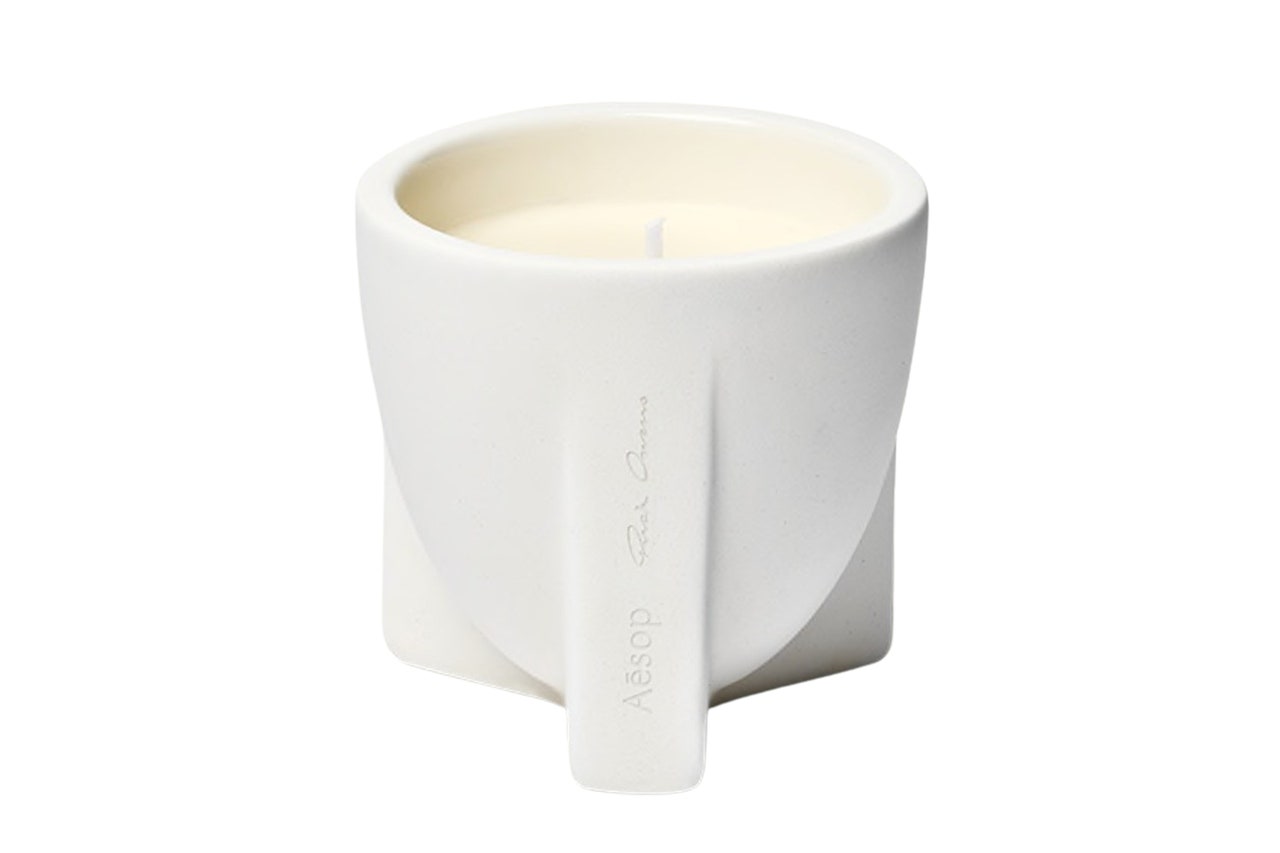 While Owens has lent his monastically freaky-deaky edge to a number of apparel collaborations over the years (including Birkenstock, Moncler, Dr. Martens, and Converse), in the case of Aesop and Rick Owens, wearable elements provide some conceptual harmony. The jersey wrap can be repurposed as a wrist-wrap or bandana, and the Stoic oil can be applied to an accompanying strand of porous ceramic beads, conceived by the designer as a “reassuring amulet” to be worn as a bracelet or stowed inside a travel bag. Scent becomes a grounding ritual—your belongings can still smell familiar even when you’re far from home.

The collection launches today, March 21, and is available on Aesop’s website in addition to select Aesop and Rick Owens stores.