Tour this elevated Echo Park ADU, a Scandinavian cabin with space below for a garden

Gail Otter has a unique view of construction.

Otter, who grew up in Los Alamitos with five siblings, watched as her father, an aeronautical engineer, drafted, designed and built a second story on top of her family’s three-bedroom, one-bathroom house.

“Our house was always in a state of being built or finished,” says Otter, a set decorator. “Because of that, building a house became one of my goals. When I was in grade school, I designed a round house arranged around a courtyard. I never built the house but it was something I always thought about.”

When she purchased a charming Echo Park Craftsman in 2001 on a lot zoned for two dwellings, Otter knew that she wanted to add a second home at some point to the 5,000-square-foot lot.

She was drawn to the 1914 house because it had a front porch, a large yard for her Labrador Luna and plenty of room for outdoor entertaining in the terraced backyard.

Inspired by her father, she wondered if she could design and build a house (with the help of a designer and contractor), but had one reservation.

An outdoor living area, located beneath the ADU, with the laundry room on the left and the office on the right.

“You can still enjoy the traditional aspects of home,” says designer Amy Shock. “Even within the squeeze of a new building type (like the ADU).”

Gail Otter wanted to add an accessory dwelling unit, or ADU, without sacrificing her yard.

Cement floors keep the outdoor living room, which is located underneath the ADU, cool all year long.

Gail Otter’s ADU blends in with the other Craftsman homes in the neighborhood.

Amy Shock designed three outdoor areas for Otter’s ADU: an entry porch, a covered deck off the master bedroom and a small balcony just off of the dining room.

Gail Otter looks out over the rooftop of her Craftsman home from her Echo Park ADU’s dining room.

Gail Otter wanted the ADU to have the feel of a modern Scandinavian cabin.

The kitchen nook features ceramics by Heather Levine and other local artists.

The kitchen cabinets are custom-built, designed by Amy Shock with Otter’s input. The doors are made of white oak veneered plywood with maple interior cabinet frames.

The kitchen, on the left, the bathroom on the right. A rolling ladder provides access to the loft.

The ADU has a full bathroom that connects the dining room and bedroom.

Exposed beam ceilings give the ADU the feel of a modern Scandinavian cabin.

A pair of antique chairs that Otter found at Pepe’s Antiques, now closed, and a colorful rug.

In 2018, several years before the city’s ADU Standard Plan Program was unveiled to help streamline the permit process and alleviate the housing crisis, Otter reached out to Amy Shock, a designer with a residential practice who had experience designing and building small spaces, including her own modernist mobile home in Ojai.

Many ADUs, or accessory dwelling units, are built as short-term rentals or office and guest rooms. Shock, however, designed the second home to do the very thing the new program intends: add to the badly needed housing stock. It also proves that new housing in older neighborhoods can be both beautiful and private while maintaining the character of the neighborhood.

In an effort to preserve the yard, Shock designed an elevated 740-square-foot ADU, which left 460 square feet of livable space between the two homes.

“The decision was made early on to position the ADU up high,” says Shock. “One reason was to capture the views from the second floor, and another was to be able to retain the largest garden area possible.”

It also meant that when Otter moved into the ADU (construction began in July 2019 and was finished a year later), she and her tenants in the front house would not look into each other’s living rooms. “Being on the second floor, and by design, the ADU avoids any direct sightline into the main house,” says Shock. “It has views over and beyond the roof of the main house.”

On paper, Otter’s ADU is a traditional home, with a full kitchen, formal dining room, bathroom, loft and master suite. But as conceived by Shock, it’s an inspiration for anyone who enjoys being outdoors but cherishes privacy.

From the street, the two-story building emulates many of the 1920s Craftsman-style homes in the neighborhood.

“I wanted the house to feel like it belongs here,” Otter says. “I didn’t want it to stand out as an addition. It was important to me for the ADU to feel like it fits on my street.”

Adds Shock: “You want to be a part of the neighborhood fabric.”

Although the exterior features Craftsman-inspired gray horizontal siding and a carriage-style one-car garage, Shock added modern touches throughout, including a shed roof, steel beams, dark support posts that make the ADU look as if it’s floating, and wire railings on the staircase and balconies.

Otter uses the garage for storage and parks in the driveway. Because the house is in a transit zone with public transportation a block away, Otter says her tenants lived without a car for more than a year.

“When I was researching cabins in Sweden and Norway, they all had exposed beam ceilings, so I didn’t want to cover them up,” says Otter, who is a fan of midcentury Danish design. “It would have been easier, but I wanted a modern Scandinavian cabin. The fireplace makes my living room so cozy.” Gail Otter outside her ADU.

Otter’s background in set design helped her to visualize the interiors.

“We knew we needed lots of glass because of the small footprint,” she says. “But I also knew that I didn’t want vinyl windows. Amy asked me if I liked skylights and I said no.”

To contrast the horizontal lines in the house, Shock installed the windows high so that Otter has privacy and can look out at trees and the downtown Los Angeles skyline instead of her neighbors’ rooftops.

“It adds a contemporary component,” Shock says. “It has its own unique feel.” The custom windows, which were designed to fit the scale of the ADU, were also an investment: Otter estimates she spent $40,000 on windows alone. 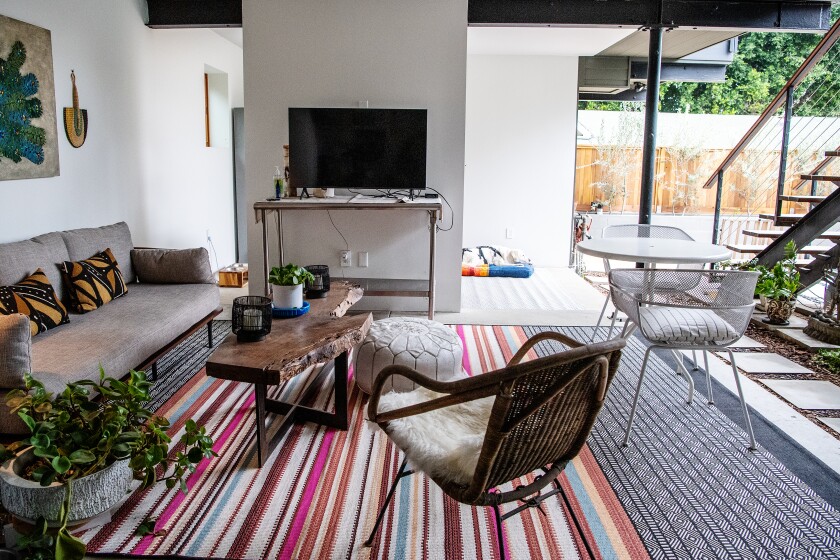 Otter’s ground-floor living area, which is private and separate from her tenants’ backyard, is nestled underneath the ADU and consists of an open-air living room, an office with a desk and refrigerator and a laundry room with enough space for her Peloton.

Nearby is a large farmhouse table where Otter hosts outdoor get-togethers. “It kept me sane during the pandemic,” she says of eating outdoors while sheltering in place. “We created such a beautiful outdoor space where I can have dinner with my friends.”

The multifamily arrangement also gave her financial stability when her commercial work came to an abrupt halt following the coronavirus outbreak.

Otter’s artistry as a set designer is apparent, with lush landscaping surrounding the dining table that includes citrus trees, native milkweed, California natives, olive trees and water retention planting beds, which were required by the city. Otter was adamant that the 10-year-old grevellia was not removed during construction, and today the tall flowering Australian native plays host to a multitude of birds.

For all of the efforts to create a livable outdoor space for Otter, there is still enough room for a private yard for her tenants in the front house. Otter says the two outdoor areas are separated by a fence, which helps with noise and privacy. When everyone is home, they don’t see or hear one another.

Asked for tips on how to plan an accessory dwelling unit or granny flat, Shock advocates for a context-based approach. “I would ask, ‘Where’s the sun? Where’s the breeze? What’s the surrounding context?’” she says. “I don’t think a cookie-cutter design, or a ‘standard’ plan, can be as successful.” 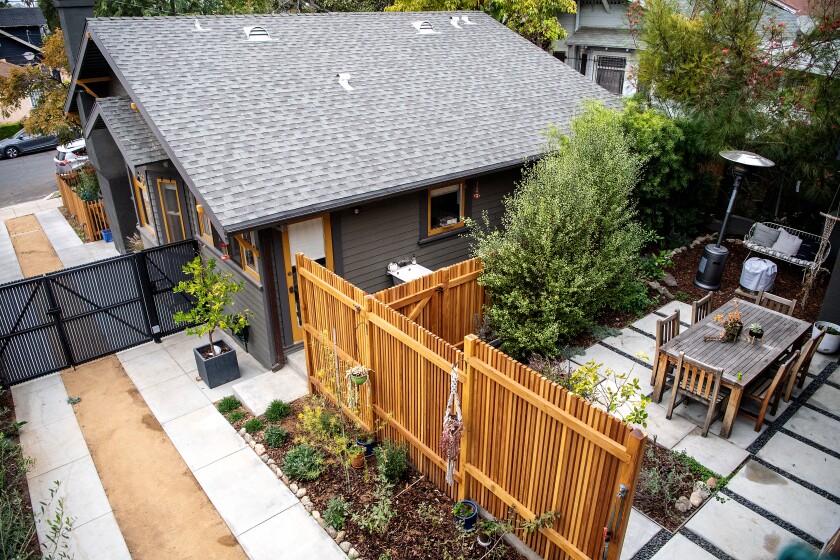 The front house and the ADU are separated by two outdoor areas and gardens.

Although Otter acknowledges she invested a lot of money in the project — the site is on a hillside so the foundations were more robust and more costly to build than on a flat lot — she doubts that she could afford to purchase a property and build a house to her preferences now that Southern California home prices have skyrocketed.

“Where can I buy another house for $600,000 that is landscaped and has an income property?” asks Otter who purchased her two-bedroom Craftsman for $175,000. “I was able to build something that suits my lifestyle and taste. I designed the house for me.”