The part of the Champlain Towers South condominium building that was still standing was demolished late Sunday in Surfside, Fla.Credit…Lynne Sladky/Associated Press

The remaining part of a collapsed condominium building in South Florida was demolished on Sunday night, after officials worried that the unstable structure might not withstand the powerful winds of an approaching tropical storm and that rescue workers could be endangered.

The demolition of the Champlain Towers South, at 10:30 p.m. on Sunday, came as anguished families continued to await news in the search for 121 people missing since the building in Surfside collapsed more than a week ago. Rescue efforts were halted for much of the weekend amid growing worries about the building’s stability, and officials warned Surfside residents to stay inside their homes in case dust and other particles polluted the air.

Officials said the demolition, which was initially thought to be weeks away, was needed to restart rescue efforts. They described the operation as one that would be contained to as small a footprint as possible — and that would aim to avoid disturbing the area where rescuers have been searching for the missing.

“Our top priority is bringing down this building,” Mayor Daniella Levine Cava of Miami-Dade County said on Sunday. “As soon as the building does come down, when the site has been deemed secure, and we are given the all clear, our search and rescue teams will immediately resume their operations,” she said.

Later Sunday, the authorities identified another victim of the collapse: David Epstein, 58. The death toll remained at 24.

Gov. Ron DeSantis said that concerns about the remaining part of the building left few options but demolition. Residents of the building who survived fled with whatever they had with them and had not been permitted to enter the teetering structure. Passports, wedding rings, cherished photos were left behind.

“At the end of the day, that building is too unsafe to let people go back in,” Mr. DeSantis said. “I know there’s a lot of people who were able to get out, fortunately, who have things there. We’re very sensitive to that. But I don’t think that there’s any way you could let someone go back up into that building given the shape that it’s in now.”

Mr. DeSantis said that while Surfside was not expected to see the worst of the approaching Tropical Storm Elsa, the city could still experience strong winds and heavy rain.

The demolition of the remaining part of the tower might help searchers access part of the rubble they could not safely reach before, Ms. Levine Cava said. Kevin Guthrie, director of the Florida Division of Emergency Management, said one-third of the debris pile has yet to be searched. 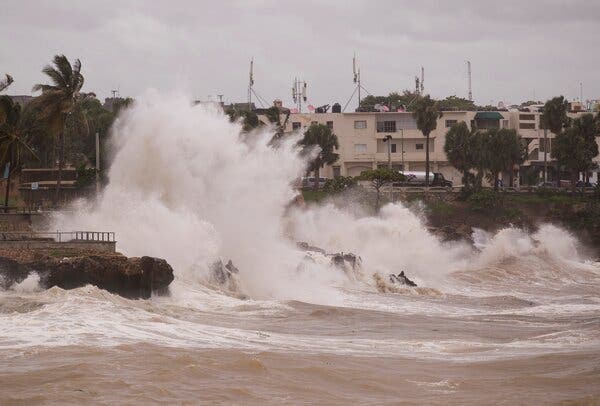 Intense waves during the passage of tropical storm Elsa in Santo Domingo, Dominican Republic, on Saturday.Credit…Orlando Barria/EPA, via Shutterstock

As Tropical Storm Elsa approached Florida, officials said they hoped the brunt of the storm would spare Surfside, the site of the building collapse. They cautioned residents closer to the storm’s predicted path, west of the Miami area, to prepare for heavy rain and possible power outages.

Elsa was expected to pass near the Florida Keys early Tuesday and then move near or over portions of the west coast of Florida, the National Hurricane Center said Monday.

On Sunday, Mayor Daniella Levine Cava of Miami-Dade County said crews in Surfside, Fla., were still anticipating possible effects from the storm that would temporarily force them to stop working for their own safety.

“Obviously, these tracks can change,” he said.

Tropical storm conditions were expected in parts of the Florida Keys by late Monday, and Elsa could dump up to 6 inches of rain over parts of Florida, which could result in flooding, the center said.

Stacie Fang, 54, was the first victim identified in the condo collapse. She was the mother of Jonah Handler, a 15-year-old boy who was pulled alive from the rubble in a dramatic rescue as he begged rescuers, “Please don’t leave me.”

Antonio Lozano, 83, and Gladys Lozano, 79, were confirmed dead by Mr. Lozano’s nephew, Phil Ferro, the chief meteorologist on WSVN Channel 7 in Miami. Mr. Ferro wrote on Instagram: “They were such beautiful people. May they rest in peace.”

Luis Andres Bermudez, 26, lived with his mother, Ana Ortiz, 46, and stepfather, Frank Kleiman, 55. Mr. Bermudez’s father confirmed his son’s death on social media, writing in Spanish: “My Luiyo. You gave me everything … I will miss you all of my life. We’ll see each other soon. I will never leave you alone.”

Manuel LaFont, 54, was a businessman who worked with Latin American companies. His former wife, Adriana LaFont, described him as “the best dad.” Mr. LaFont’s son, 10, and daughter, 13, were with Ms. LaFont when the building collapsed.

Andreas Giannitsopoulos, 21, was in South Florida visiting Mr. LaFont, a close friend of his father’s. He was studying economics at Vanderbilt University and had been a decathlon athlete at his high school. An image of him is on a mural outside the school’s athletic facility.

Leon Oliwkowicz, 80, and Cristina Beatriz Elvira, 74, were from Venezuela and had recently moved to Surfside, according to Chabadinfo.com, which said they were active in the Orthodox Jewish community in greater Chicago, where one of their daughters lives.

Marcus Joseph Guara, 52, lived with his wife, Anaely Rodriguez, 42, and their two daughters, Lucia Guara, 10, and Emma Guara, 4. Mr. Guara was remembered as a kind and generous man, a godfather to twins and a fan of hard rock music.

Hilda Noriega, 92, was a longtime resident of Champlain Towers South who enjoyed traveling and whose family described her “unconditional love.” Hours before the collapse, she attended a celebration with relatives.

Michael David Altman, 50, came from Costa Rica to the United States as a child, and was an avid racquetball player as a youth. “He was a warm man. He conquered a lot of obstacles in his life and always came out on top,” his son, Nicholas, told The Miami Herald.

Also killed in the collapse were Magaly Elena Delgado, 80, and David Epstein, 58.