‘Happiest Season’ is a holiday rom-com about coming out. Here’s why that’s important

That true love prevails is a well-known tradition in romantic comedies, so it’s neither a spoiler nor a secret that “Happiest Season” ends with a happily ever after.

The lovers in this Christmas rom-com are Abby, a student pursuing a doctorate in history portrayed by Kristen Stewart, and Mackenzie Davis’ Harper, a journalist. Harper might be the couple’s main holiday enthusiast, but it’s Abby who plans a Christmas proposal after agreeing to join her girlfriend on a trip home to visit her parents.

What Harper has failed to mention until they’re well into their road trip is that her family has no idea that she has a girlfriend — or that she’s a lesbian. And with her father in the middle of a political campaign, Harper’s plan is for Abby to play her straight roommate. It’s the perfect recipe for hijinks, heartbreak and an eventual happy ending.

“There’s something so nice about watching a Christmas rom-com and knowing it ends with everything being fine,” said Davis. “I’m OK to go along this journey, and I can be scared when they fight, and I can be sad in this moment, and I could laugh, but ultimately, there’s this certainty that it concludes [and] it’s so nice to know that everything’s gonna be OK in the end.”

Directed by Clea DuVall, “Happiest Season,” out now on Hulu, was born from her desire to see holiday fare that reflected her own experiences.

“I’ve always been such a huge fan of holiday movies, but … if there was an LGBTQ+ character in a holiday film, they were always in the background or just sort of thrown in to diversify an otherwise ‘normal’ family,” said DuVall. “Once I had transitioned into writing and directing, I realized that I could be the person who made that movie, and it was this very powerful, inspiring moment.”

“Happiest Season” is the second feature directed by the veteran actress who wrote, directed and starred in 2016’s “The Intervention.” And although she had started conceptualizing the characters and working on an outline on her own, progress stalled while acting projects kept DuVall busy. It wasn’t until she met cowriter Mary Holland (who also appears in the film as Harper’s sister Jane) while working on “Veep” that a script came together.

“We just really connected as human beings, and she was so funny and warm,” said DuVall. “And writing is such a lonely experience that I thought it would be so much more fun to work on a comedy with someone, especially someone who really made me laugh.”

After sending a draft of the script to Temple Hill’s Isaac Klausner, who joined the project as a producer, they eventually chose to move forward at Sony’s TriStar Pictures, one of a number of studios where it was surprisingly well-received. Director Clea DuVall, center, on the set of “Happiest Season.”

Surprising because it arrives without precedent. “Happiest Season” was intended to hit theaters as the first lesbian holiday rom-com released by a major studio, but plans had to change as the COVID-19 pandemic upended norms such as watching anything inside a theater.

“Before we moved to Hulu, people would ask me about the movie and approaching the place where I was going to have to encourage people to go to a movie theater started feeling very wrong to me, and on a moral level, just not something I was willing to do,” said DuVall, who despite the circumstances feels the streamer is a great home for her film. “It is more meaningful to me that people will be able to watch it safely from their homes with their family, and that maybe people who wouldn’t have gone to see it in the theater will now see it and get something out of it that they didn’t know they needed.”

Despite this minor setback, “Happiest Season” remains revolutionary for putting a queer couple at the center of a mainstream genre that is synonymous with heteronormativity. It’s significant even in a year that the TV powerhouses of Christmas rom-coms, including Hallmark and Lifetime, have also added more inclusive offerings to their lineups. This one is a major studio production directed by an out filmmaker, featuring an award-winning queer lead and other well-known LGBTQ actors in supporting roles.

“It was such a huge relief and pleasure and delight to work with a fellow queer woman on a movie like this because we are well past this stage,” said Stewart of working with DuVall. “It just felt so good to remember together funny things about what it was like to feel more uncomfortable. I wouldn’t have been able to do that with someone who hadn’t also gone through it.”

While Stewart advocates the importance of uplifting underrepresented voices, she doesn’t believe in hard and fast rules limiting who can tell what stories. 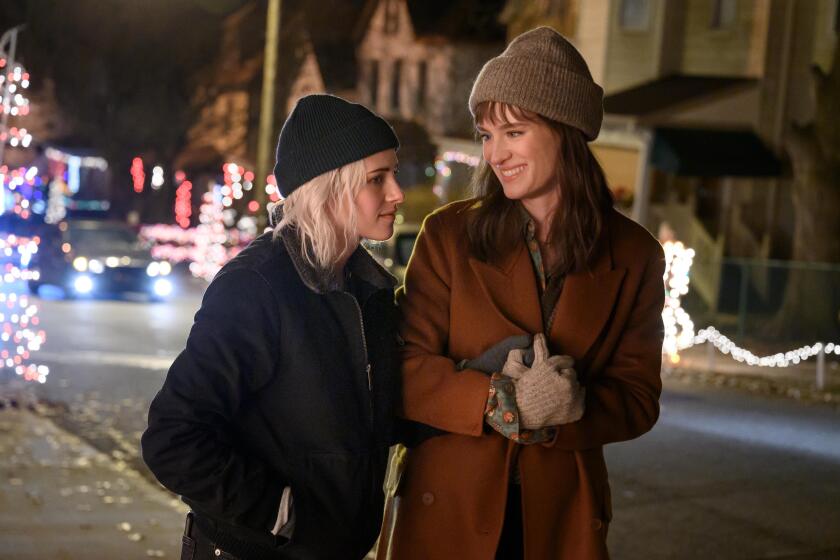 “I don’t think you need to be gay to be telling a gay story,” Stewart said. “Mackenzie’s a straight woman. She’s one of the most present, open, aware, honest people. I know that we feel the same way about loving other humans. So I just knew she was the partner for me in this movie.”

The queer love story of “Happiest Season” also stands out because although there have been more LGBTQ filmmakers making LGBTQ movies in recent years, these films are more often than not indies and happy endings can be few and far between.

“Typically with a queer story, my experience with watching movies is that you’re always sort of on the edge of your seat going, ‘Are they going to be OK?’” said Stewart. “Because that really does reflect a true experience. So it was so cool to see something [where] you know it’s going to work out. That these people just sort of need to get through this, but that they’re clearly in love and going to be together.”
For DuVall, leaning into all of the rules of Christmas movies and rom-coms was key because audiences deserve to see authentic LGBTQ stories with happy endings.

“Really nailing that tone was so important for the story … so that we could then transition into what the movie is really about, which is something very real,” said DuVall.

But both Davis and Stewart, who are better known for their more dramatic work, explained that they had a tendency stray away from that tone in their performances.

“We had to be reminded constantly by Clea what genre movie we were making,” said Davis. “I just really wanted to honor this story because it was personal to so many people that were going to watch the movie and so many people who were in the movie, and I imposed a lot of pressure on myself. It just felt very important to me. But I just dove so deep into the tragedy of the situation … and Clea would just come into scenes and be like, ‘Stop. It’s not that movie. It is a comedy.’ Having her recalibrate us was essential.”

“I always kind of lean away from stuff that I feel may be cliche or trite,” said Stewart. “And every single time Clea would come back and go ‘Look, you kind of just have to get on your tippy toes and kiss her.’ You just have to do the thing. You want to to give the people what they want.”

Ultimately, “Happiest Season” could be summed up as a coming-out story with all the holiday trimmings. But it’s a type of coming-out story that is rarely reflected on the big screen both because Harper is quite confident in her identity outside of her parents’ orbit and because it’s within a comedy.

“This is a woman who is so self-realized,” said Stewart. “When you meet [Harper] in the beginning, she’s more self-assured than I am, even. She’s more confident. Like she really knows herself.”

“Coming-out stories are always so fraught and dramatic,” said DuVall. “To be able to see one in the context of a comedy, while still honoring the experience was really, really important to me. We all have elements of ourselves that we’re trying to come to terms with, and for Harper it is being her authentic self with her family, which is something that I think a lot of people can relate to.” 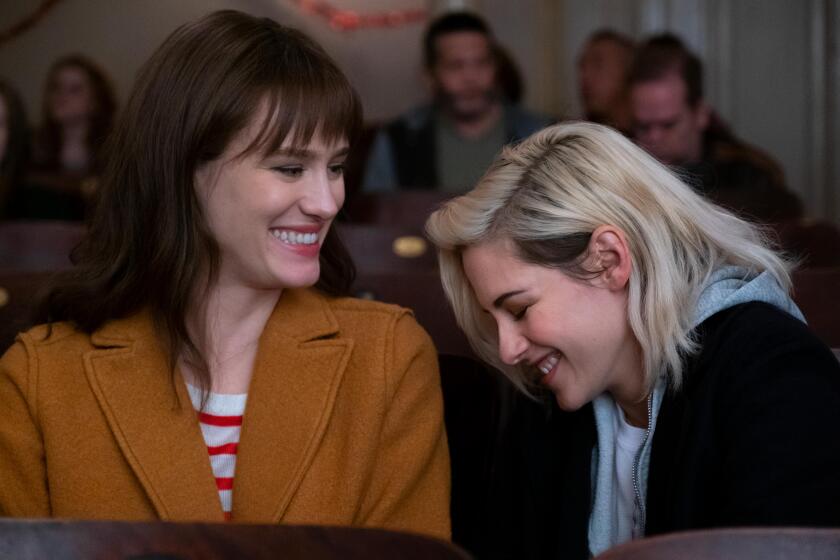 For audiences that have become more accustomed to increased onscreen LGBTQ representation (particularly in television) and seeing queer story lines beyond the coming-out experience, Harper’s story might feel old-fashioned. But Stewart notes that the normalcy and comfort some see around coming out in 2020 is just one perspective.

And DuVall points out how “the assumption that you’re straight is everywhere, so that in itself is like a very light homophobia that is ingrained into our world” and reminds us that coming out is still a big deal for many people.

She also points to moves by the government enacting anti-LGBTQ legislation, in particular those targeting the transgender community, as well as the power of conservative courts to turn back hard-fought rights.

“Homophobia is not gone,” said DuVall. “Aggression towards LGBTQ+ people is not gone. So to anyone who’s saying ‘Aren’t we past coming out?’ No. It is a big deal. There are still people who are in the closet, and they are f— terrified. … [So] to be able to tell a story about someone coming out that is not a tragedy, that is a comedy, that is warm and bright and hopeful, that has a happy ending, is so important.”

But DuVall and Stewart both look forward to a day when things have changed.

“I think it’s cool to not pretend like it’s not hard to come out for some people even though for others it’s become really normal,” said Stewart. “Movies always are a little bit behind the times slightly. We’re always playing a couple years of catch up.

“I’m really excited to start seeing coming-out stories, queer stories from really young perspectives and how that’s gonna shift. What does it feel like for a younger person who doesn’t understand that it would be weird to not come out when you were 10 or say that you always knew you were gay?”

TikTok is flipping out for Fufu. How a West African staple went viral