Donald Trump clearly wants credit for the recent successes of the Covid-19 vaccines US companies are developing. “I came up with vaccines that people didn’t think we’d have for five years,” he said on Fox News Sunday. He’s now apparently not only taking credit for his administration’s Operation Warp Speed, which has pumped billions in to the vaccine development process, but for the vaccine formulations themselves.

With each new, exciting development, Trump has taken credit. When the pharmaceutical company Pfizer announced promising results from its Covid-19 vaccine clinical trial with BioNTech, he claimed in a news conference the success was “as a result of Operation Warp Speed.”

Trump’s comments about the Pfizer vaccine weren’t quite true. Pfizer has not received money from Warp Speed, the administration’s plan to catalyze vaccine development — at least when it comes to research and development: The US government has agreed to purchase 100 million doses of Pfizer’s vaccine if it gains approval. The government has given Warp Speed money to Moderna, whose vaccine also appears to be extremely effective. Even in the case of Moderna, it definitely wasn’t Trump who catalyzed the research and development of the technology.

But you know what? Let Trump take credit for these vaccines.

And not because he’s been an actual champion of science, scientists, or the regulatory process. Let him take credit because it may serve a greater good: convincing his Republican followers to trust and take the vaccine when it becomes broadly available. That, ultimately, could save many lives.

We may eventually have vaccines, but the question remains: Will people take them?

Only 58 percent of respondents on a recent Gallup poll indicated they’d take the vaccine when it first gains approval. This figure is up from a low of 50 percent back in September. Before that, willingness to get vaccinated had been declining throughout the summer.

What’s more, the surveys might actually be underestimating the problem of mistrust. “When we look at seasonal influenza vaccination rates, for example, surveys always overestimate the number of people who get it,” Matt Motta, a political scientist at Oklahoma State University, told me over the summer. It’s a lot easier to tell a pollster that you’re going to get a vaccine than it is to actually go get one.

According to Gallup, just 49 percent of Republicans say they’d get a vaccine when it’s approved. (Democrats are more confident, at 69 percent, with their their confidence on the upswing.) Which means there’s a chance for Trump to do some actual good in his final days in office and after he leaves by continuing to trumpet his contribution to the vaccine process, thereby inspiring some of his Republican followers to take the vaccine. 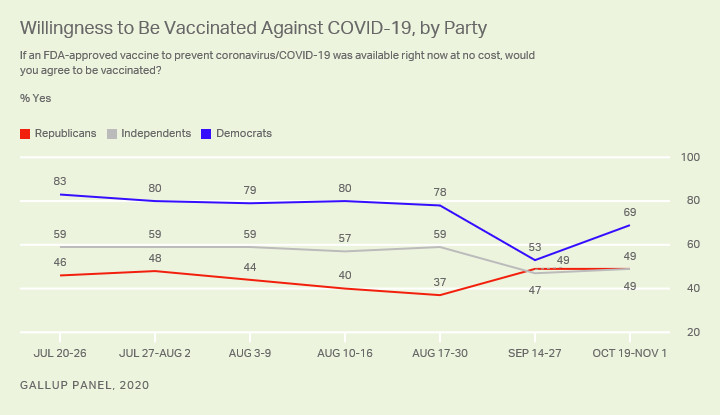 To beat the virus, we’ll need a large proportion of vaccinated people across the country (at least 50 percent or higher), and that number needs to include people of all political beliefs.

Trump’s power to sway minds is real. Can he put it to good use?

Trump owns a lot of the blame for much of the Covid-19 vaccine hesitancy for many reasons: for instance, his constant attacks on scientists and his insinuations that the career officials at the Food and Drug Administration played politics with the vaccine approval.

But he has an incredible power to shift the opinions, nearly overnight, of his followers. My colleague Dylan Matthews has documented sudden changes in opinion on topics like Russia and Vladimir Putin, free trade, and support of the news media’s watchdog role. Or consider how Trump riled up Republicans hostility toward the NFL after calling on the league to fire players who kneeled in protest during the national anthem.

Trump’s power to sway Republican minds has also been shown experimentally, as I wrote about in a 2018 piece on the “follow the leader” effect in political science.

In January 2017, BYU political scientists Michael Barber and Jeremy Pope designed an experiment that wondered: Are Trump’s supporters ideological, or will they follow him wherever his policy whims go? Right after Trump’s inauguration, they ran an online experiment with 1,300 Republicans.

The study was pretty simple. Participants were asked to rate whether they supported or opposed policies like a higher minimum wage, the nuclear agreement with Iran, restrictions on abortion access, background checks for gun owners, and so on. These are the types of issues conservatives and liberals tend to be sharply divided on.

Barber and Pope wondered: Would Republicans be more likely to endorse a liberal policy if they were told Trump supported it?

The answer: “On average, across all of the questions that we asked, when presented with a liberal policy, Republicans became about 15 percentage points more likely to support that liberal policy” when they were told Trump supported it, Pope says. They follow their leader. “The conclusion we should draw is that the public, the average Republican sitting out there in America, is not going to stop Trump from doing whatever he wants.”

The effect even held true on questions about immigration. If Trump supported a lax immigration policy, his supporters were more likely to say they did, too. (They’ve also replicated these results with new responses, later in the Trump presidency, though these new findings have yet to be published in a peer-reviewed journal.)

I recently contacted Barber and Pope and asked them: Do they think Trump has the power to sway GOP minds to take the vaccine? “Trump’s best move from a public health perspective would be to take credit for whatever vaccine emerges — moving Republican voters to be more trusting of the vaccine,” Barber said in an email.

Not only would it help to encourage more people to get the vaccine overall, but also Trump supporters getting the vaccine could be particularly helpful in stopping the pandemic.

Trump supporters are less likely to engage in behaviors that help stop the spread of the virus, like mask-wearing, which will still be needed for some time even if there’s an approved vaccine, and have been more vocally opposed to stay-at-home orders. If they’re still feeling loyal to Trump in 2021 after he leaves office, they could be a big part of the solution when it comes to the vaccine.

There could be other consequences to a Trump vaccine endorsement, however: If Trump supports the eventual approved vaccines, might Democratic voters be less likely to get it? Yes, Trump can change the minds of his own voters, and he may also change the minds of his opposition, in the opposite direction: The recent decline in Democrats’ trust in a potential vaccine may be linked to Trump’s rhetoric.

“You’re right to worry about decreased trust among Democrats, but I think that might be mitigated if the scientists also backed the vaccine — people like [Dr. Anthony] Fauci and others in the FDA/CDC,” Barber says.

Of course, Trump inspiring his followers to take the vaccine doesn’t solve the overall hesitancy problem. Surveys have also found higher rates of hesitancy among women and Black Americans, groups that are generally less likely to listen to Trump.

It’s not just that people are afraid the science is being rushed or that the administration is playing politics with the approval process; as I reported in August, people are also worried about costs and access.

The lesson here isn’t that Trump can fix this giant mess he’s created. It’s that everyone in power who has influence over public opinion should encourage their followers to get the vaccine if it’s deemed to be safe and effective by the scientific community. The messaging needs to be extra clear and consistent because both of the most promising vaccines — the Moderna vaccine and the one from Pfizer — require two doses. People will need to be motivated to sign up for not just one shot, but two.

There’s so much about the US response to the pandemic that has been botched. We failed on testing early and then failed to scale it up. We failed on contact tracing and on reopening many of our communities safely. But we haven’t screwed up a vaccine campaign yet.

There’s still time to get it right. Trump endorsing a vaccine that’s shown to be safe and effective is a decent start — even if it comes with a heap of undue boasting.

Will you help keep Vox free for all?

Millions of people rely on Vox to understand how the policy decisions made in Washington, from health care to unemployment to housing, could impact their lives. Our work is well-sourced, research-driven, and in-depth. And that kind of work takes resources. Even after the economy recovers, advertising alone will never be enough to support it. If you have already made a contribution to Vox, thank you. If you haven’t, help us keep our journalism free for everyone by making a financial contribution today, from as little as $3.

The Best Wireless Headphones for Working Out