Where to see the L.A. area’s tallest Christmas trees

It’s a good thing this year’s Rockefeller Center Christmas tree came with a tiny owl found nestled in its branches, because, at just 75 feet tall, the spruce that serves as the centerpiece of the New York City holiday celebration is otherwise unremarkable compared to the assortment of towering tannenbaums being lit up across Southern California this year.

Man reunited with cat after it vanished 15 years ago: ‘It was very emotional’

Below are five SoCal trees that top out taller than the one in the middle of Manhattan — including one that lays claim to being the tallest fresh-cut Christmas tree in the world.

The Americana at Brand

The 2020 Christmas tree at the Americana at Brand in Glendale clocks in at 80 feet tall — five feet taller than the one in Rockefeller Center.

The white fir that has taken up residence at this Glendale shopping center hails from the Mt. Shasta region of Northern California. It’s in the neighborhood of 80 years old and clocks in at 80 feet tall. According to the center’s representatives, it is adorned with 12,000 lights and more than 8,000 ornaments. (We don’t have time to tally ’em up ourselves so we’ll take their word for it.) The Americana at Brand, 889 Americana Way, Glendale. 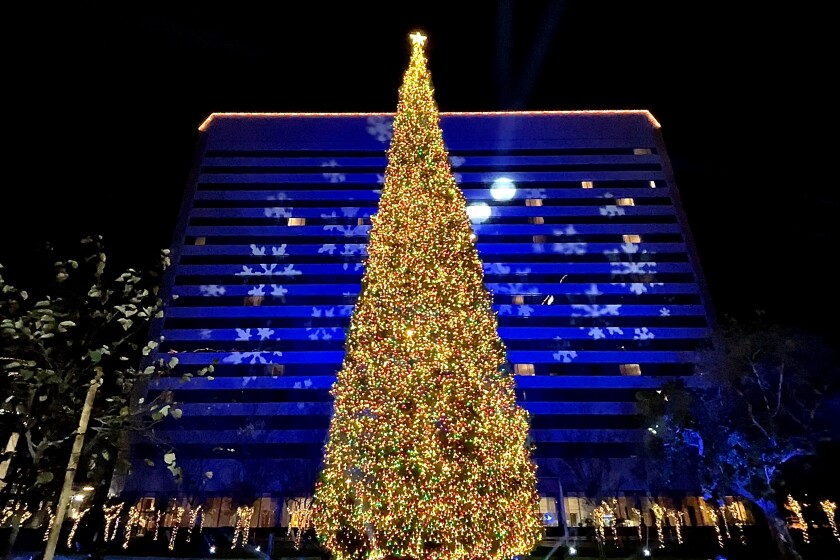 South Coast Plaza’s tallest Christmas tree this year (there are several on the property) soars 96 feet and boasts 100,000 lights.

South Coast Plaza’s Nov. 19 tree-lighting ceremony may have been virtual this year but the tree itself is very real — and it stands 96 feet tall. Located in the same location as the luxury shopping center’s trees of past years, in Town Center Park in front of the Westin hotel, its 100,000 lights will be sparkling nightly through the holiday season. South Coast Plaza, 3333 Bristol St., Costa Mesa.

After a six-year run of hoisting the tallest tree around — last year’s scraped the sky at 115 feet — this Commerce outlet mall’s 100-footer for 2020 might feel a little scaled back. The tradeoff, though, is that it’s closer than some of the other gussied-up conifers; barely seven miles from downtown L.A., just off the Santa Ana Freeway. We’ve been told that it took two weeks to decorate this white fir from Mt. Shasta with more than 180,000 twinkling lights and 10,000 ornaments and bows. Citadel Outlets, 100 Citadel Drive, Los Angeles.

Like the evergreen at the Americana at Brand (both are Caruso Affiliated properties), the Grove’s holiday centerpiece is a white fir that’s approximately 80 years old and hails from the Mt. Shasta region. This one towers just a bit taller than the one at the Americana, though, clocking in at just over 100 feet tall. It also sports more lights (around 15,000) and ornaments (more than 10,000) than its sister-property tree. Like that one, and the comparatively diminutive 50-footer at Caruso’s Palisades Villlage shopping center in Pacific Palisades), these trees offer some good news: In exchange for being harvested and put on display for your holiday enjoyment, eight new firs will be planted in its place. The Grove, 189 The Grove Drive, Los Angeles. 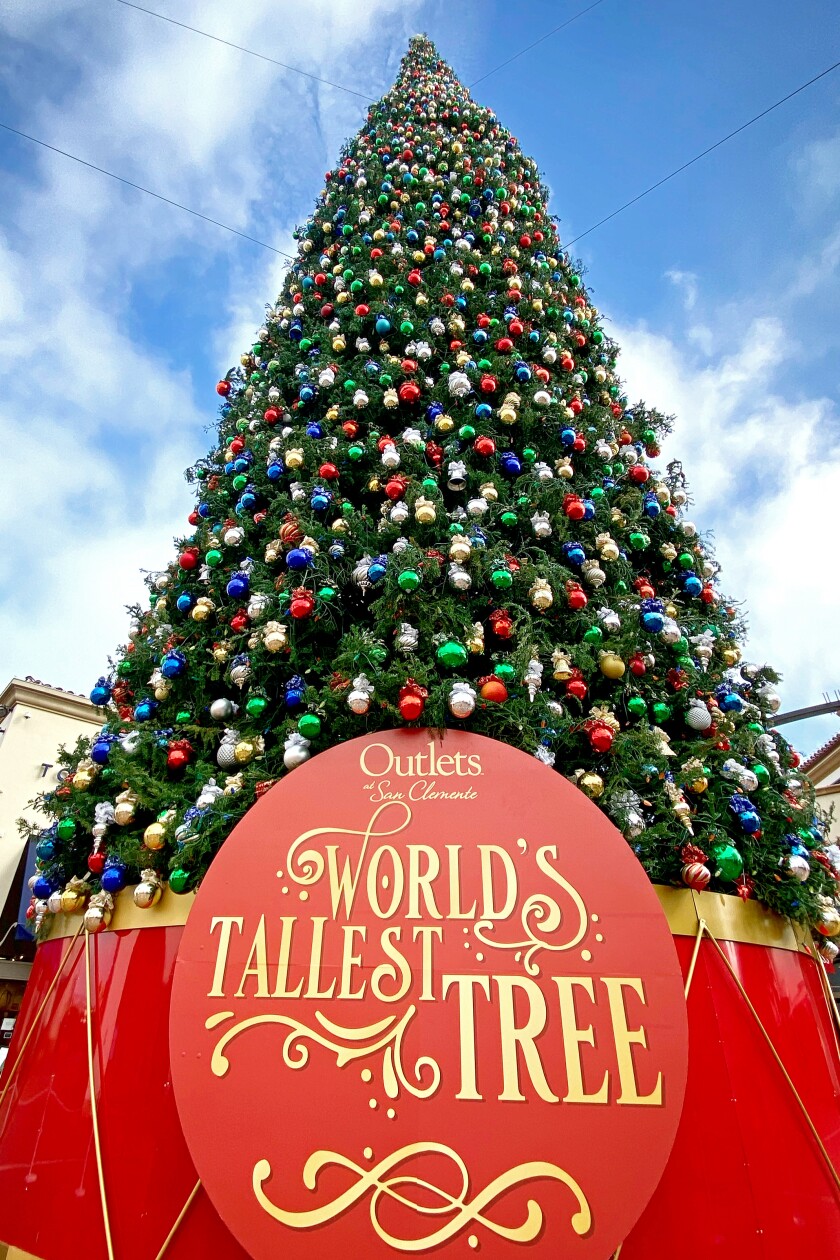 The Outlets at San Clemente boasts that its 125-footer is the world’s tallest live-cut Christmas tree this year.

Located 60 miles from downtown L.A., a road trip to the Outlets at San Clemente might seem like a long way to drive to see a Christmas tree. That is unless it’s the tallest such tree for hundreds of miles around, which it might just be, since this white fir from Mt. Shasta measures in at 125 feet. According to the center’s representatives, that makes it — to the best of their knowledge, anyway — the world’s largest live-cut Christmas tree of the 2020 holiday season. Decorating that impressive coniferous real estate through Jan. 4 are more than 18,000 colored lights and 10,000 bows and ornaments. Outlets at San Clemente, 101 W. Avenida Vista Hermosa, San Clemente.

CPAC organizers begged attendees to wear masks — and got booed