John Holiday spent the first two months of this year in Los Angeles. He wasn’t expecting to spend the last one here too, but as we’ve learned, 2020 has left few plans unchanged.

Holiday, a 35-year-old countertenor from Texas, began this year on the Los Angeles Opera stage lending his soaring voice tothe role of Orpheus’ Double in theworld premiere of composer Matthew Aucoin’s “Eurydice.” He was scheduled to spend the rest of the year performing across the U.S. and Europe. This December, he thought, he’d be singing “a Messiah or three or five” and prepping for a spring debut at the Metropolitan Opera in New York — an engagement ultimately canceled like so many others by the COVID-19 pandemic.

Which is why Holiday is instead back in L.A. competing in the live rounds of NBC’s “The Voice” and singing to an audience of four celebrity judges and millions of strangers. Whether he’s turning chairs with otherworldly high notes or channeling his inner Céline Dion in rehearsals with Usher and John Legend, Holiday comes across on reality TV as he does in real life: an ambitious artist with a tender heart, exceptional talent and a mission to bring joy and hope to the world through his music.

A member of Legend’s team, Holiday is emerging as a frontrunner on a season packed with accomplished, professional competitors, many of whom have also found themselves out of work this year because of the pandemic.

“Back in March, when all the cancelations started coming in, it was devastating,” Holiday said. “And not just for me. Every single singer I know was devastated because the arts industry was put on hold. Of course, we all understand why, but that doesn’t make the loss of work any easier.”

Above all, Holiday said he was heartbroken by “the loss of being able to connect with people through music.” Giving that up was unacceptable, and that’s why he pivoted from opera stage to TV singing competition.

Like most highly trained classical singers, Holiday has heard comments like “You should be on ‘American Idol’!” or “Why haven’t you tried out for ‘America’s Got Talent’ or ‘The Voice’?” before.

A lot of opera singers cringe at the idea, Holiday said. But with his calendar suddenly wide open, he started to consider it. When one dream got sidelined, it helped to have a second on the back burner. “For the first time, I thought, ‘You know what, now is the time to see what this is all about,’” he said. 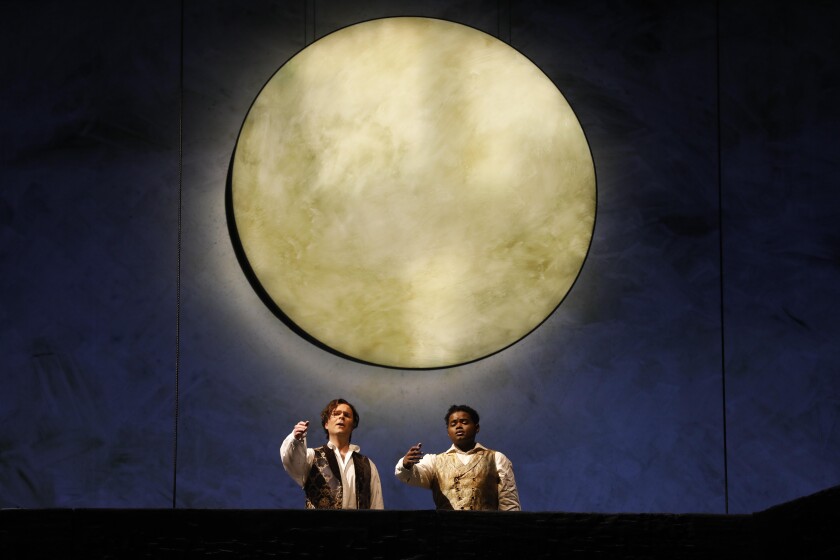 John Holiday as Orpheus’ Double, right, and Joshua Hopkins as Orpheus in L.A. Opera’s “Eurydice” at the Dorothy Chandler Pavilion, photographed slightly more than a month before the pandemic shut down performing arts nationwide.

Holiday has long sung jazz as well as opera, and crossover success was in his sights even before the pandemic hit. He’s sung at the Apollo Theater, opened for Jason Mraz and told the New Yorker that gospel music and Cardi B influence his classical singing. His dream: perform to a sold-out Metropolitan Opera house one week and a sold-out Madison Square Garden the next. He wants to be a household name, the world’s top countertenor.

“Let’s dream big,” he said with a huge smile and contagious enthusiasm. “And why not? If you’re going to have dreams, don’t dream small. If there is one thing I want to share with people, it’s that. Because when I dream it, I know it will happen.”

Holiday’s big dreams might sound far-fetched, especially when most Americans can’t name even one countertenor, let alone pick a favorite. But as the singer is quick to point out, countertenors have never been confined to the opera stage.

In opera and classical music, the term countertenor refers to a male singer with a powerful falsetto who sings in the same range as a mezzo-soprano. “But the truth is, there have been many countertenors in mainstream culture,” Holiday said. “Frankie Lymon, countertenor. Frankie Valli, countertenor. I think even Smokey Robinson is a countertenor. More than anything, I’m happy to bring the word countertenor to the forefront of people’s minds, and I hope that I do justice to all countertenors out there. I hope they are all proud of me for representing them.”

To secure a spot on “The Voice,” participants must first turn at least one judge’s chair in a blind audition. Holiday turned three, winning Legend over almost immediately and stunning Kelly Clarkson and Gwen Stefani, both of whom assumed he was a woman based on his vocals. In that first round, Holiday chose to show off his range with Ella Fitzgerald’s “Misty,” in part because he adores the song and it is his grandmother’s favorite, and in part because of its first three words: “Look at me.”

“It was an invitation to America and to the coaches. Look at me. Hear what I have to say,” he said. 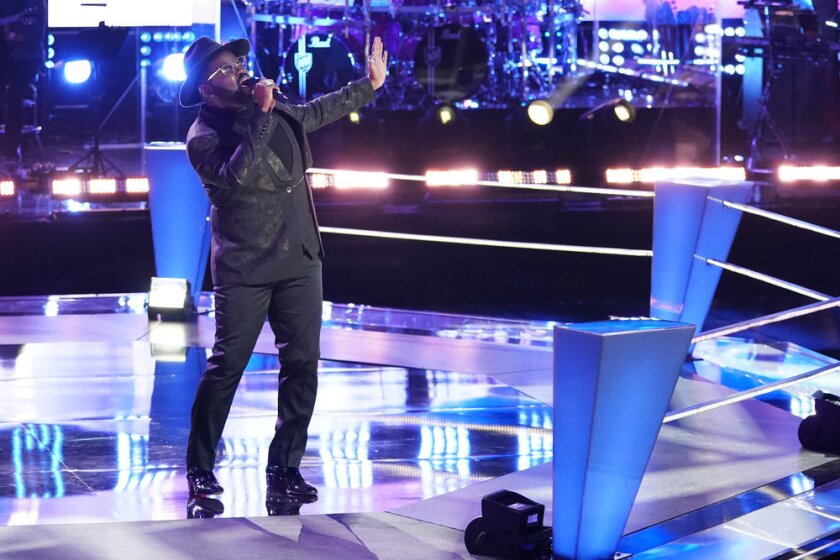 John Holiday surprised judges and has emerged as a frontrunner this season on “The Voice.”

As a professor of voice at Lawrence University in Wisconsin, Holiday said he regularly reminds his students to lean into their individuality. It’s a lesson he thought he had internalized already as a Black, gay man from southern Texas with a sky-high voice. But in rehearsals with Legend, he’s relearned that lesson for himself.

“I want you to be who you are, John,” Legend reminded him. “Don’t be afraid to be your most authentic self.”

Legend’s message echoed what Holiday tells his own students, he said. “It’s so confirming to hear it from him and to be reminded to be more myself, more unique, more different.”

Having dazzled the judges in the blind auditions and the battle and knockout rounds, Holiday will perform live this week, his fate on the show in the hands of voting fans across the country.

Win or lose, Holiday hopes his stint on “The Voice” inspires his students and ever-widening audiences to be themselves and go big. In a year in which so many people have watched their dreams come crashing down, he is thrilled to have a stage — any stage, but especially this one right now — on which to share his gift and message.

“If my music can bring somebody a little hope, a little joy,” he said. “If I can bring someone out of being depressed during this difficult time or help them if they’re grieving, if I can remind one person to lean into their uniqueness in those few minutes I’m on TV, then I’ve done my job.”

3 Signs You’re Running an Unsustainable Supply Chain, and How to Fix It

3 Signs You’re Running an Unsustainable Supply Chain, and How to Fix It