Warmongering Russian President Vladimir Putin has said his disastrous war in Ukraine is moving ahead as planned, despite his forces being routed in the east.

In what are his first comments since his army collapsed and fled from the Kharkiv region of Ukraine, he said his Donbas operation is progressing ‘not at a very fast pace’ but would not be thrown off course by the humiliating defeat.

‘Our offensive operation in the Donbas is not stopping. They’re moving forward – not at a very fast pace – but they are gradually taking more and more territory,’ he said after a summit of the Shanghai Cooperation Organisation.

The optimistic outlook comes as his army has ceded over 3,000 square miles of Ukrainian territory that they conquered with great loss of life and equipment to a lightning Ukrainian counteroffensive in less than two weeks.

On Friday, a smiling Putin warned of a ‘more serious’ response if his forces continued to be routed in Ukraine.

‘The Kyiv authorities have announced that they have started an active counter-offensive operation. We’ll see how it goes and how it ends,’ he said with a smirk in the Uzbek capital of Samarkand. 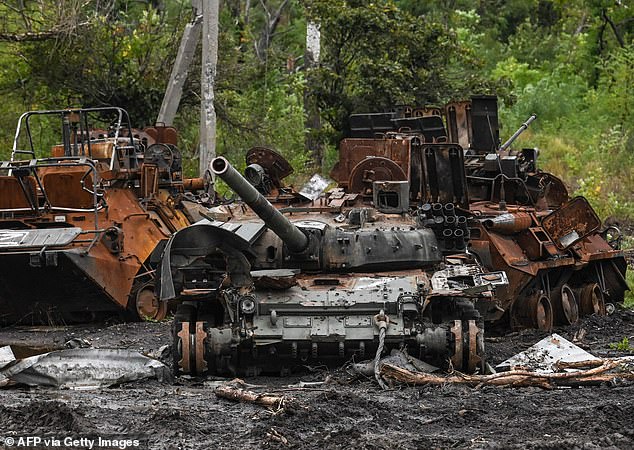 Pictured: A destroyed Russian tank and armoured personnel carriers on the outskirts of Izium. A smiling Putin warned of a ‘more serious’ response if his forces continued to be routed in Ukraine 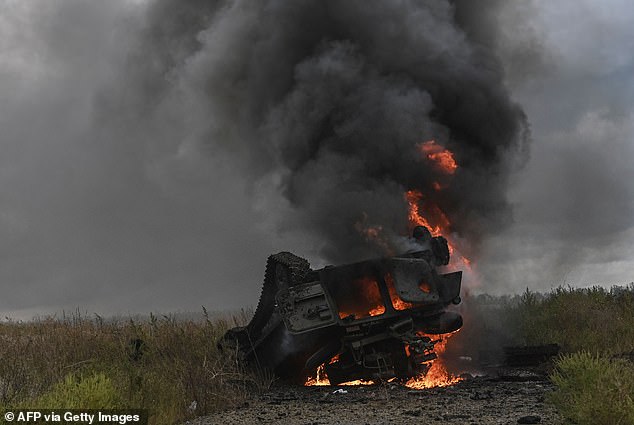 Pictured: A destroyed Russian MT-LB armoured personnel carrier burning in a field on the outskirts of Izium 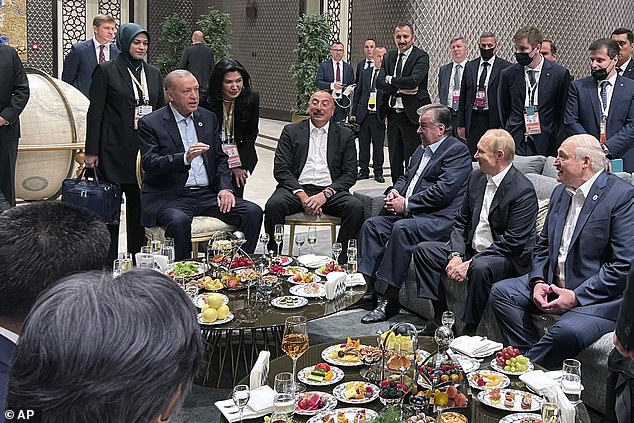 ‘Indeed, we have been rather self-restrained in our response to it for now. Recently, the Russian armed forces have inflicted a couple of sensitive blows,’

‘Let’s say that they were a warning. If the situation continues to develop like this, then the response will be more serious.’

‘I remind you that the Russian army isn’t fighting in its entirety… Only the professional army is fighting.’

It is considered that Putin’s two main options, should he wish to escalate the war in Ukraine, is either to mobilise the entire country onto a war footing, or deploy nuclear weapons on the battlefield.

In light of the threat, President Joe Biden warned Putin to not to use nuclear weapons in response to battlefield humiliations in Ukraine or face ‘consequences.’

‘Don’t. Don’t. Don’t,’ the President said, in terms addressed directly to his Russian counterpart. ‘You will change the face of war unlike anything since World War II.’

Biden said a US response would be ‘consequential’, and that ‘[Russia] will become more of a pariah in the world than they ever have been.’

‘And depending on the extent of what they do will determine what response would occur.’

Mobilisation would be politically difficult for Putin, who has so far not declared war against Ukraine but characterised the war as a ‘special military operation’.

Mobilisation would entail declaring war, admitting the failure of the ‘special military operation’ and would require conscripting hundreds of thousands of young men who would not necessarily be willing to fight a failed war of aggression against a brother country.

The war in the Donbas has been ongoing since 2014, when Russia fomented a pro-Moscow uprising among separatist elements that triggered a low-intensity war with Kyiv.

Putin attempted to conquer the whole of Ukraine in February 2022, but was forced to reduce his strategic aims to just capturing the industrial Donbas region in March after his forces were hammered in the region around Kyiv.

However even these war aims are now in doubt, and Putin has come under pressure from so-called friends and allies at the high-level Uzbekistan summit to bring the war to an end. 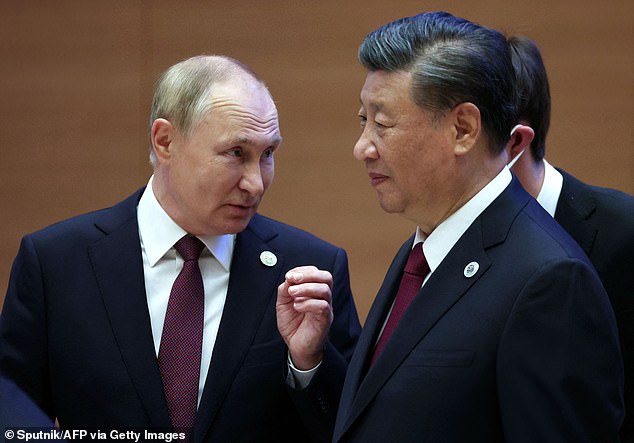 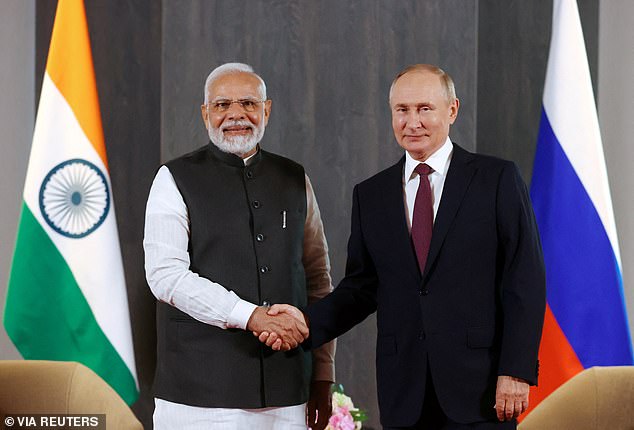 I know that today’s era is not of war,’ Indian Prime Minister Narendra Modi told the Russian leader in televised comments as the two met Friday in Uzbekistan.

Mr Putin sought to assuage India’s concerns, telling Mr Modi at the SCO summit that Moscow wants to see a quick end to the fighting. He also alleged that Ukrainian officials have refused to negotiate.

‘I know your stand on the conflict in Ukraine and the concerns that you have repeatedly voiced,’ the Russian leader told Mr Modi.

‘We will do all we can to end that as quickly as possible. Regrettably, the other side, the leadership of Ukraine, has rejected the negotiations process and stated that it wants to achieve its goals by military means, on the battlefield.’

At the same summit a day earlier, Putin acknowledged China’s unspecified ‘questions and concerns’ about the war in Ukraine while also thanking Chinese President Xi Jinping for his government’s ‘balanced position’ on the conflict.

The hurried retreat of his troops, together with the rare public reservations expressed by key allies, underscored the challenges Putin faces on all fronts. Both China and India maintain strong ties with Russia and had sought to remain neutral on Ukraine.

Xi, in a statement released by his government, expressed support for Russia’s ‘core interests’ but also interest in working together to ‘inject stability’ into world affairs. Modi said he wanted to discuss ‘how we can move forward on the path of peace.’