‘How many warnings does football need?’ Sickening clash of heads puts concussion protocols under scrutiny

Just minutes after returning to the pitch, blood began seeping through the bandage Arsenal medical staff had wrapped around Luiz’s head.

After the match Arsenal boss Mikel Arteta said that Luiz was substituted at halftime because he felt “uncomfortable heading the ball.”

Wolves confirmed on Monday that Jimenez underwent successful surgery on a fractured skull.

Arteta insisted that the doctors “made all the tests and followed all the protocols” to ensure it was safe for Luiz to continue and said the Brazilian never lost consciousness.

However, Headway, a UK charity that works to improve life after brain injury, said in a statement after the match that loss of consciousness is a factor in only 10% of all concussion cases.

“We have repeatedly warned about the risks to players and the importance of elite-level sport setting a good example for impressionable younger players to follow,” said Luke Griggs, Deputy Chief Executive at Headway.

“Too often in football, we see players returning to the pitch having undergone a concussion assessment — only to be withdrawn a few minutes later when it is clear that they are not fit to continue.

READ: International football’s concussion protocols ‘are the worst in the world’ 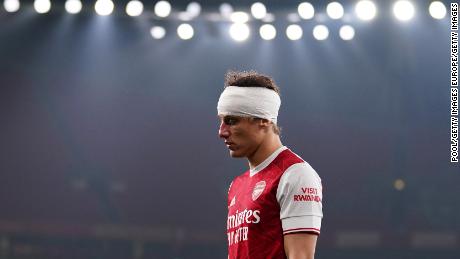 “That is the very reason why we urgently need temporary concussion substitutes in football. You simply cannot take a risk with head injuries.

“They are not like muscular injuries where you can put a player back on ‘to see if they can run it off.’ One further blow to the head when concussed could have serious consequences.”

Football’s concussion protocols have increasingly come under the spotlight in recent years.

While other sports such as rugby, cricket and American football have adapted their rules to allow temporary substitutions, which ensure players with head injuries can be properly assessed for concussion, football’s protocols in May 2019 were described by Chris Nowinski, co-founder and CEO of the Concussion Legacy Foundation, as “archaic” and “the worst in the world.”

In October of last year, the International Football Association Board (IFAB) — the organization responsible for “preserving and developing” the rules of the game — held a meeting in Zurich to discuss football’s protocols, notably the addition of a temporary substitute to allow for a 10-minute concussion assessment window instead of the current three-minute test.

IFAB decided an expert group should be tasked with finding a solution taking into account “both player welfare and the need to ensure sporting fairness,” it said in a statement at the time.

More than 13 months later, however, IFAB said in a November statement that the “main proposed principles” for additional substitutions submitted by its Concussion Expert Group will “be explored further” and that trials could begin in January.

“The IFAB takes head injuries in football matches very seriously as protecting the health of players is — and will remain — a top priority in developing the Laws of the Game,” an IFAB spokesperson told CNN.

“The IFAB has made tackling this issue a key objective and has established a Concussion Expert Group that has discussed and evaluated research on the topic of concussion and head injuries.

“Given the very complex nature of this topic, it has been clear from the beginning that concrete decisions related to the Laws of the Game must be well thought through and examined from all different stakeholder perspectives (medical concussion experts, team doctors, player representatives, coaches, competition organizers, refereeing and Laws of the Game experts, etc.).”

IFAB says detailed protocols regarding additional permanent concussions substitutions are currently being finalized and will be considered by IFAB’s board of directors at a December 16 meeting. The board will decide whether extensive trials will be approved for January 2021.

The English Football Association (FA) said it “welcomes” and “will support” the proposed trials of an additional permanent concussion substitution.

“Player welfare is paramount and we believe that this is an important step to help support players, clubs and medical teams when identifying and managing head injuries and incidents of concussion during a game,” an FA spokesperson said on Twitter.

However, FIFPro — the worldwide representative organization for professional footballers — doesn’t believe permanent substitutions are the right way forward and would instead prefer temporary substitutions.

“We have pushed for the trial of temporary substitutions, as you see in Rugby Union, for instance, and this trial was not well received,” Dr. Vincent Gouttebarge, FIFPro’s chief medical officer, told Sky. “At present times, they want to try first permanent concussion substitutions.

“Again, it is a move forward, but nevertheless I don’t think we are going to solve the problem with this permanent substitution because it does not provide the medical team with sufficient time to assess on field and off field the player’s potential concussion. 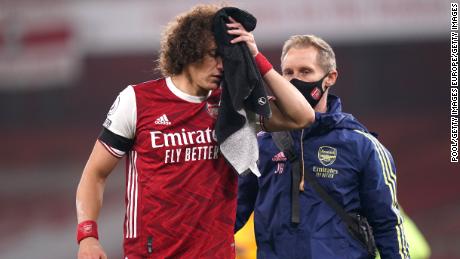 “I hope that football stakeholders will not have to wait [for] a very high profile case with a very severe consequence in order to move forward.

“Football is perhaps one of the sports that is most conservative in terms of advancements, by comparison to other sports. We would have preferred to see some measures applied yesterday rather than tomorrow.”

The Premier League has previously said it wants to be involved in the trial and is waiting on the full IFAB proposal to make a decision on the next steps.

“The question that has to be asked is had the concussion substitutes rule been in place, would Luiz have been allowed to return to the field of play?” added Headway’s Griggs. “Would that extra time in the treatment room have led to a different decision being made?

“The concussion protocol clearly states that … ‘anyone with a suspected concussion must be immediately removed from play’, while the sport continues to promote an ‘if in doubt, sit it out’ approach to head injuries.

“Time and time again we are seeing this rhetoric not being borne out by actions on the pitch. Something is not right. This cannot be allowed to continue. How many warnings does football need?”

Biden had his first call with Putin. He said everything Trump wouldn’t.

Biden had his first call with Putin. He said everything Trump wouldn’t.