Former President Trump said in a statement Monday that the FBI is searching his Mar-a-Lago estate in Florida, in what he described as a “raid.”

It was not immediately clear why agents were present at his Palm Beach summer home, but Trump said the property was “under siege, raided, and occupied by a large group of FBI agents.” He added that the agents broke open his safe.

“After working and cooperating with the relevant government agencies, this unannounced raid on my home was not necessary or appropriate,” he said.

Executing a search requires the signoff of a federal judge, who issues a warrant based upon evidence of a potential crime. It is unlikely that such a high-profile warrant to search the personal residence of a former president would be sought without top Justice Department officials reviewing the evidence and approving the request.

Trump was not at his Palm Beach estate during the search and was in the New York City area, according to a person familiar with the situation.

In his statement, Trump called the search an attempt to influence the midterm elections in November and compared it to the Nixon campaign bugging the Democratic National Committee during the Watergate scandal.

Several former Trump administration officials have testified before a grand jury recently as part of the Justice Department investigation into the events around the Jan. 6, 2021, insurrection, but it was not immediately clear whether the search is connected to that or to other Trump-related investigations, including the potential destruction and removal of presidential records that took place when he left office.

Earlier this year, the National Archives and Records Administration recovered 15 boxes of official records from Trump’s home at Mar-a-Lago, some of which were reportedly labeled classified or top secret, others of which were reportedly destroyed. The agency, which is tasked with preserving the records for the public under the Presidential Records Act, also asked the Justice Department to determine whether charges were warranted.

“The scene was set for this kind of dramatic move when it became clear Trump had taken documents with him to Mar-a-Lago,” said Timothy A. Naftali, a presidential historian at New York University.

The potential punishment for improperly concealing or destroying presidential records is a fine, up to three years imprisonment and having to “forfeit his office and be disqualified from holding any office under the United States.”

Trump has strongly indicated he will seek another term, with an announcement expected as soon as in the next few weeks.

The U.S. attorney’s offices in Washington and the Southern District of Florida did not immediately respond to requests for comment. Atty. Gen. Merrick Garland was appointed by President Biden and Trump appointed FBI Director Christopher A. Wray. A spokesman for the House committee investigating the Jan. 6 attack on the U.S. Capitol declined to comment.

The committee’s investigation into Trump’s attempts to overturn the 2020 election is ongoing, with hearings expected to resume in September. The Justice Department has been tight-lipped about the target of its ongoing investigation, though Garland has emphasized that no one will be above the law.

A White House official said on background that the administration was not informed of the search in advance. Biden has said little about the Jan. 6 hearings and has been careful not to comment about his predecessor’s potential legal liability, stating repeatedly that the Justice Department operates with complete independence. 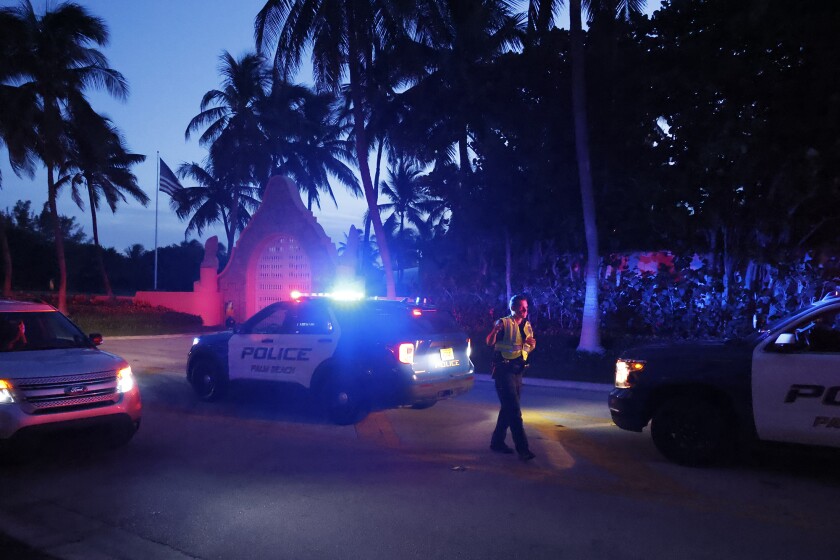 In the short term, the news of Monday’s search amounted to an inconvenience for the White House, immediately overwhelming a news cycle that has focused in recent days on a string of political wins for Biden and Democrats, including a successful CIA mission that killed the leader of Al Qaeda, a surprisingly strong July jobs report last week and the Senate’s passage Sunday of a $700-billion package to combat climate change and lower prescription drug prices.

Julian E. Zelizer, a presidential historian at Princeton University, said Trump is correct in noting the unprecedented nature of the search, even if his analogy to Watergate is way off.

“It’s not a break-in. It’s the opposite,” he said. “This is a warranted search. It’s not like what Nixon did to the Democrats. If anything, it’s more akin to what might have happened to Nixon had he not been pardoned.”

The other unprecedented aspect of the federal investigation, Zelizer added, is Trump’s nascent but still unannounced bid to seek the presidency again in 2024.

“It’s not simply an ex-president who’s being investigated, but a potential nominee for 2024,” he said.

Trump’s staunchest allies condemned the FBI and accused the Justice Department of persecuting the former president.

House Minority Leader Kevin McCarthy (R-Bakersfield) promised to investigate the Justice Department if Republicans regain control of the house in November, warning Garland in a tweet to “preserve your documents and clear your calendar.”

Rep. Marjorie Taylor Greene of Georgia put out a call to “defund” the FBI.

“This is the rogue behavior of communist countries, NOT the United States of America!!!” Greene said on Twitter.

Trump’s immediate politicization of the raid is no surprise considering his past responses to a special counsel investigation, two impeachments and the other ongoing federal inquiries into his business dealings. He is no longer constitutionally immune to prosecution as a sitting president.

“He does not ever get attacked and not use the attack” for political gain, Zelizer said. “The question is: Does the evidence of what’s being found overwhelm his ability to capitalize politically?”