Commentary: Elections have consequences, even for movies and TV. Previewing post-Trump, Biden-era entertainment

Elections have consequences, including on entertainment screens.

Except for the instant snap-back of late-night comedy — we all get to dream-cast the “Saturday Night Live” versions of Biden’s Cabinet now — there’s always a bit of a delayed reaction. But movies and TV shows will eventually reflect the new reality defined by voters in 2020. What now, for our viewing pleasure? A Biden-Harris utopia, with a national chain of masked, socially distanced “Kumbaya” singers celebrating the end of lockdowns while Santa Claus is dragged away — only to be rescued at the last minute by Jon Voight?

There are serious questions here: What is Trumpism without Trump and how will mainstream media track the ways it’s certain to reshape American society? Will the Black Lives Matter protests that roiled this summer of discontent and helped drive diversity initiatives in the entertainment industry result in permanent, visible change? Are the country’s divisions now so deep that they’ll affect what movies are made and how they’re marketed? It will take a while for the shifting of those national tectonic plates to shake out.

Here in California, there were smaller electoral temblors that may show up as entertainment before we know it. Some of the new laws, such as Prop 19, which changed property tax rules, might not easily lend themselves to dramatic interpretation. Then again, haven’t we all been waiting for the screwball comedy with empty nesters Allison Janney and Richard Schiff taking advantage of incentives for homeowners 55 and older to move into more expensive houses (to jump on that train, they raise quick capital by building their own meth lab — wait, maybe it’s a screwball drama)? Or the “Glengarry Glen Ross”-style pressure cooker with hard-driving realtor Donald Glover browbeating Janney and Schiff into mortgaging their lives for a palace?

Legalizing medical marijuana in different states over the years has yielded gems such as the 2010 “South Park” episode in which Stan’s father, Randy, gives himself testicular cancer so he can get a prescription. And since California legalized pot for fun in 2016 (Prop 64), we’ve had fewer stoner comedies — perhaps it’s less funny when it’s legal, like just showing a bunch of drunk dudes doing drunk-dude things. Whither art thou gone, “Pineapple Express”? The Russo Brothers’ new film, “Cherry,” focuses on a young vet with PTSD (played by Spider-Man himself, Tom Holland), who falls into heroin addiction. It’s a period piece — set in the early 2000s; it remains to be seen whether Oregon’s Measure 110, which legalized small amounts of hard drugs, makes those movies go cold turkey as well.

The failure of California‘s Prop 25 not only saved the cash bail industry, it may have saved one of Hollywood’s enduring character types. Bail bondspeople have always been reliable characters, from Robert Forster’s Oscar-nominated turn in “Jackie Brown” to Giovanni Ribisi and his onscreen clan in “Sneaky Pete.” Their actual work may not have been exciting as “Midnight Run” or “The Mandalorian” may have led us to believe, but a way of life gone is a way of life gone. If the law had passed, we might have seen movies and TV shows about a vanishing industry. As things are, criminal-justice reform advocates might argue a movie about the sometimes-devastating effects of cash bail is long overdue.

Rideshare drivers have been staple characters for a few years now — Kumail Nanjiani in “Stuber” and lone-wolf avenger Denzel Washington in “The Equalizer 2″ come to mind — how will their lives be changed by the passage of the hotly contested Prop 22? The new law locks in some wage rates and insurance stipends tied to hours worked, and also locks out avenues of redress for drivers and the chance to have more of their business expenses refunded. Uber and Lyft recently said they total around 500,000 drivers between them (many shared) in the state, so anything that affects them affects a whole lot of Californians. Time will tell if Prop 22 is the “win-win” rideshare companies tout or the problematic trap labor advocates warn. We’ll see before long how the effects on gig drivers’ lives and livelihoods are portrayed on screen.

Other impacts of California’s new laws may be a bit subtle for high-concept loglines, but Prop 14 did provide $5.5 billion in state funding for stem-cell and other medical research. It may take a long time for those vines to bear fruit in the real world, but Hollywood is always happy to lovingly light a heart-tugger about a sick kid and a miracle cure or drop a hundred million in VFX on a Will Smith actioner about the resulting monster or virus.

The real action, though, remains on the national stage. How will the Fall of Trump ripple through movie screens? Everyone has their dream-cast version of the, shall we say, colorful characters among the outgoing administration and its satellites. I mean, Laura Linney as Amy Coney Barrett, right? Can you imagine evil Michael Cera (or the ghost of John Cazale) as Stephen Miller? A melting candlestick as Mitch McConnell? Surely there has to be an absurdist comedy in the works on the Trump campaign’s efforts to overturn the election alone.

But who should write and direct? Armando Iannucci, Aaron Sorkin and Oliver Stone have the bona fides, but they’ve been around the K Street block a time or 20. Some might argue David Lynch or David Cronenberg would be better suited to the task. But how about the Coen brothers? Imagine the cast of characters from “O Brother, Where Art Thou?” and “Burn After Reading” in impeccably tailored “Intolerable Cruelty” drag. You have to know Clooney would be up for it. (Playing whom? Send him your suggestions!) Maybe Brad Pitt would reprise his Dr. Fauci impersonation.

On the other side, plenty of Democrats are calling for the presidential transition to happen now — the casting of Jim Carrey as President-elect Joe Biden on “SNL” has not been well-received. No shade on Carrey, who has added to his notoriety in recent years with his politically charged paintings, but his manic energy seems wrong for “Sleepy Joe.” Perhaps it’s time to transition to John C. Reilly in the role? Or press Will Ferrell back into service? Now that he is confirmed as No. 46, Dems might relax enough to enjoy depictions of “Uncle Joe” as a kindly, kind of confused, hug-bestowing gaffe machine. But nobody better touch Maya Rudolph as Vice President-elect Kamala Harris. When casting works, leave it alone. 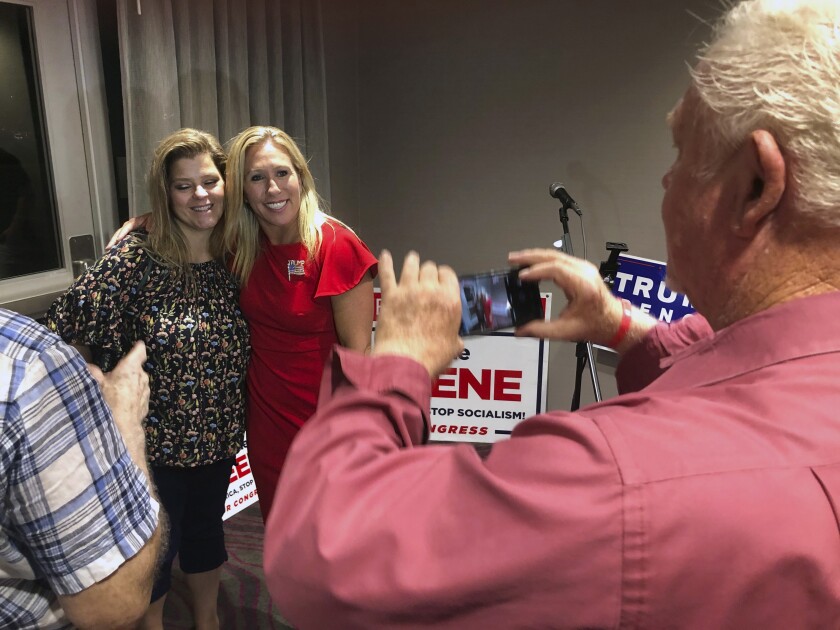 Supporters take photos with then-candidate Marjorie Taylor Greene, right, in Rome, Ga., in August. Greene, who has expressed support for the QAnon conspiracy claim and been criticized for other incendiary comments, has been elected to Congress.

There are some exciting new characters ripe for their own dramatizations. There’s QAnon hypewoman and CrossFit enthusiast Marjorie Taylor Greene. The new Georgia congresswoman has called Holocaust survivor George Soros a Nazi collaborator and brandished an AR-15 in a social media post threatening “Antifa terrorists.” She has to be worth at least a supporting role in some kind of “Trumpism without Trump” comedy or at least a “South Park” episode in which she goes hunting for Antifa Army HQ. Depending on how the runoff elections go in Georgia, there might be a market for Jon Ossoff impersonators. The 33-year-old just looks like he’s auditioning for “Doogie Howser, Senator.” Casting directors are scouring Nickelodeon and the Disney Channel now. 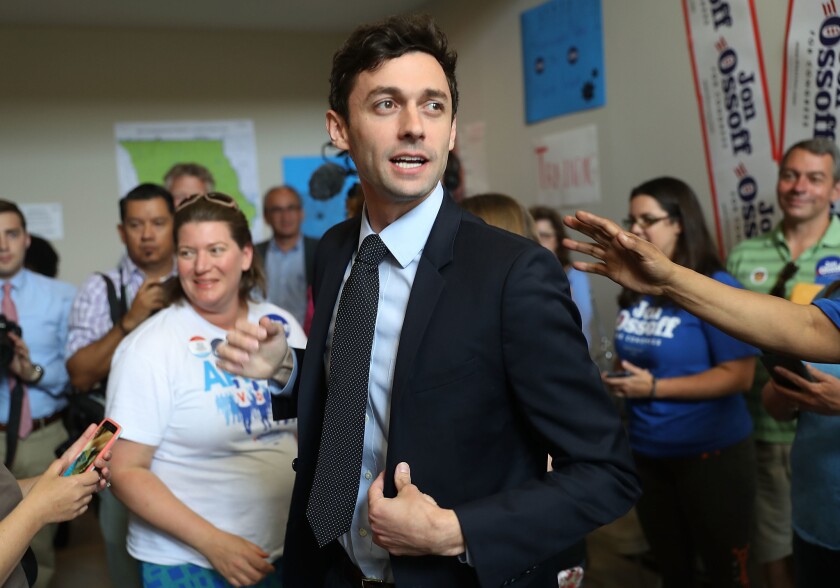 For the big blockbuster, Dems might want to see an ordinary woman step into a phone booth (finding a phone booth being itself a superhuman act) and emerge as … Stacey Abrams with news of another 750,000 Georgia voter ballot requests. Of course, Republicans might watch the same scene and think they’re in a horror movie.