Winter resorts in the West roll out new features for skiers, boarders

The ski season‘s abrupt end in March because of the coronavirus deprived skiers and snowboarders of six to eight weeks of spring skiing.

It also deprived Western ski-resort operators of significant lift ticket and off-snow revenue — and created great uncertainty and anxiety about this winter season now getting underway.

As a result, the summer’s usual spending on capital improvements was dialed back, with many planned projects deferred at least a year — or indefinitely. Vail Resorts, for example, which owns 34 North American mountain resorts (including California’s Heavenly, Northstar and Kirkwood), deferred all discretionary chairlift construction, terrain expansion and base-area upgrades at its properties, reducing its capital plan by $80 to $85 million.

Which brings to mind an old saying, with a pandemic twist: How do you make $1 million in the ski and mountain resort industry? Start with $2 million.

That said, improvements have been made and new terrain, lifts, restaurants, programs and air access are debuting. Here’s some of what’s new in California and the West.

Mammoth Mountain debuts two uphill “skinning” routes (for a total of five). Uphill lift tickets ($29 for the day, $150 for the season) are required. Yama Ramen, a new traditional ramen restaurant in the Village, offers a selection of top-shelf Japanese whiskies. 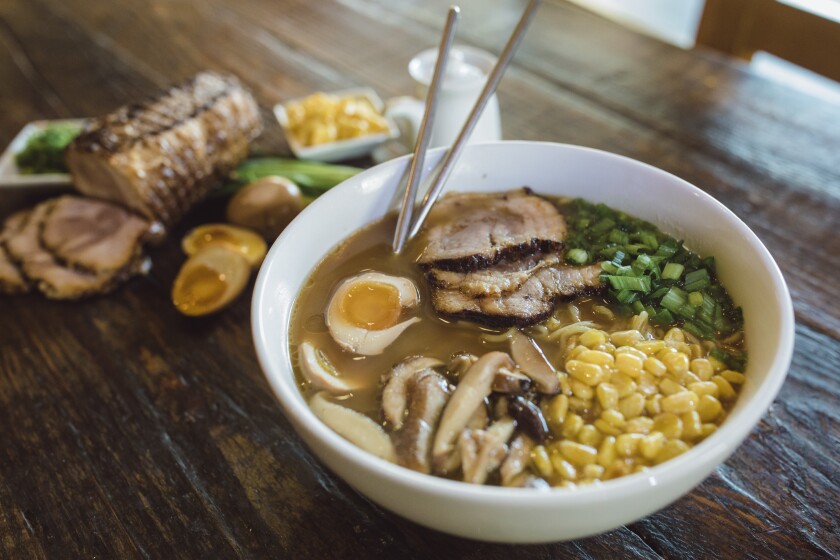 Yama Ramen, a ramen restaurant, has opened in the Village at Mammoth Mountain Resort.

China Peak, 65 miles northeast of Fresno, has invested $3.5 million in additional snowmaking coverage, added a new tubing hill and expanded the deck at its midmountain Buckhorn Bar and Grill. Mt. Rose Ski Tahoe increases snowmaking in the Slide Bowl and adds a winch cat to its grooming fleet.

Squaw Valley Alpine Meadows expands deck seating at the Alpine Meadows Base Lodge, Gold Coast Lodge and KT Base Bar, featuring hundreds of new tables, chairs, heaters and fire pits. On the horizon after the 2020-21 season: a name change that will delete the word “squaw.” Sugar Bowl/Royal Gorge Resort Sugar Bowl introduces a hands-free ticketing system with reloadable pass cards and access gates at seven primary chairlifts. The resort has installed several self-service lift ticket pickup stations at its base portals. Guests can purchase tickets online and pick up their cards at one of the stations. Royal Gorge has widened Yuba, one of its most popular trails, and enlarged its teaching area near the Summit Station lodge by 30%, allowing for lessons with more space between groups.

The biggest ski and snowboard season news in the Beehive State might be Salt Lake City International Airport, the country’s newest airport, which reopened in September. The $4-billion project’s first two phases include a new terminal, a new parking garage and two new concourses, both now open, to accommodate larger planes.

Alta, marking its 83rd year of lift-served skiing in Little Cottonwood Canyon, has completed its expansion of Alf’s Restaurant, which includes a new ski shop and coffee shop.

Nordic Valley Ski Resort, near Ogden, debuts a 300-acre terrain expansion in an undeveloped area of the mountain. The new terrain is served by the resort’s first new lift in more than 20 years, a high-speed detachable six-seater. A new yurt village has been built for skiers and riders at the base of Middle Bowl at Snowbasin Resort in Utah.

Snowbasin Resort’s new learning area is served by the relocated Grizzly and Wildflower carpet lifts. Three on-mountain outdoor dining options open near Earl’s Lodge, the Old Day Lodge and at the base of Strawberry Gondola. A yurt village has been built at the base of the Middle Bowl, providing skiers and riders with an area to rest or warm up. The Needles Lodge, at 8,700 feet, adds the Overlook, a full-service bar with panoramic views.

Owners of Bluebird Backcountry have moved forward with a full season at a new location 30 minutes from Steamboat Springs for those who want to try backcountry skiing in a nonthreatening environment. The new ski area, without lifts, will welcome a maximum of 200 guests a day spread across 1,200 acres of inbound terrain as well as offer an additional 3,000 acres of guided-only terrain. 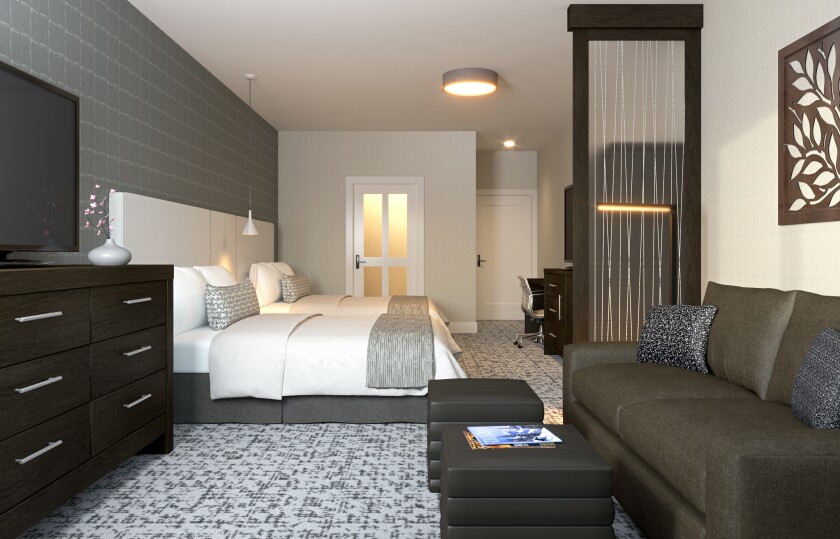 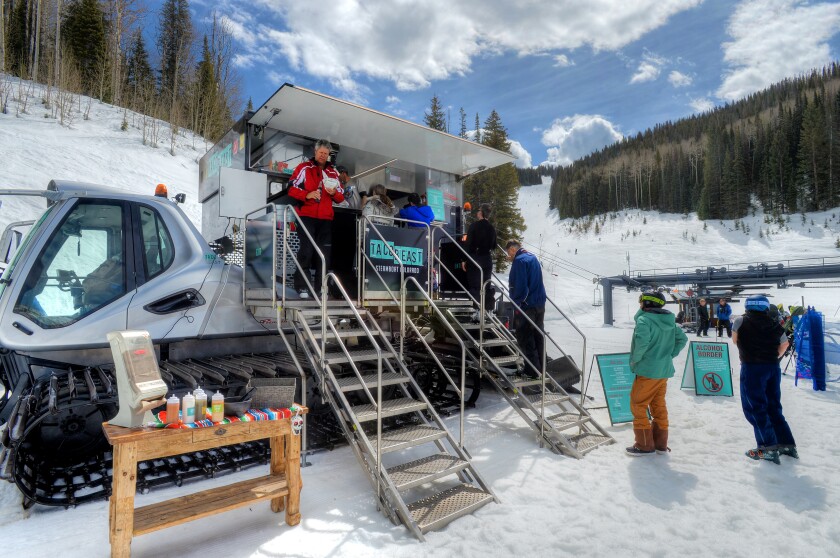 The roaming Taco Beast is a popular lunch spot at Steamboat Ski Resort in Colorado.

Steamboat features two unusual outdoor dining options, welcoming back the roaming Taco Beast and adding the Pizza Ranger in the Bashor area. The resort’s “First Tracks” program will start earlier this season, at 7:45 a.m., to help spread skiers and riders across the mountain.

Telluride Ski Resort introduces 20 refurbished gondola cabin “dining bubbles” — heated, lighted and with room for as many as eight people in the same party — in Mountain Village, its gateway hub, as well as expanded yurt and outdoor dining services across the mountain. 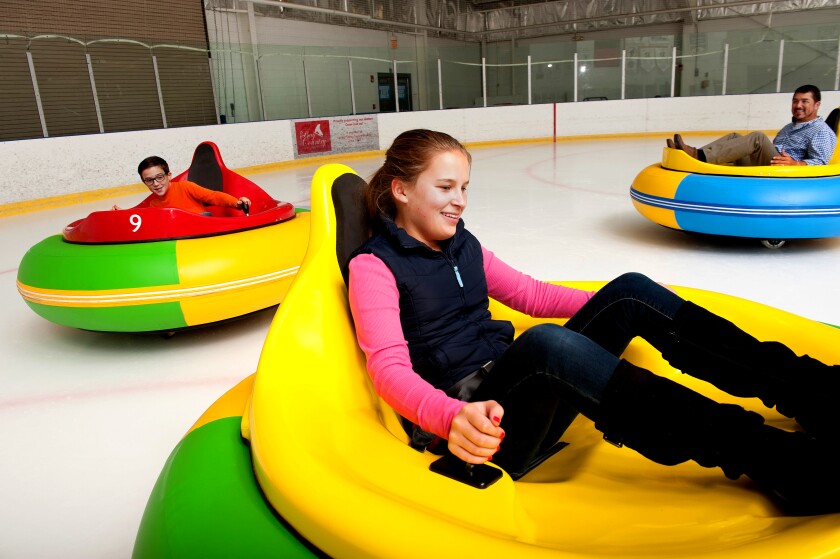 Ice bumper cars can be found on a frozen pond at Colorado’s Winter Park Resort.

Winter Park Resort debuts a guided introduction to “uphilling,” which is growing in popularity across the country, and ice bumper cars on the frozen pond in its Village base area.

Elsewhere in the West

Taos Ski Valley in New Mexico will operate at 25% of peak on-mountain capacity this season because of the pandemic, and the resort’s signature hotel, the Blake, will operate at 65% capacity.

Montana’s Big Sky Resort introduces Early Access, an unguided first-tracks program that allows skiers and riders to load the Ramcharger 8 lift at 8 a.m., one hour before public access. Lift ticket and season passholders can purchase Early Access from mid-December to March and must book in advance online, with a limited number of reservations daily.