‘Lies, deceit and snake oil’: Here’s what happened at the Jan. 6 hearing

Faced with no legal path to staying in office, former President Trump summoned supporters to Washington to pressure Congress to overturn the 2020 election results, a move far-right extremists saw as a cue to attack the Capitol on Jan. 6, 2021, the House committee investigating the insurrection argued in Tuesday’s hearing.

Skelton: We don’t need to raise taxes again with Prop. 30

Members of the panel used the seventh public hearing to cover an extended timeline from the electoral college’s Dec. 14, 2020, meeting to affirm Joe Biden’s win until Jan. 6, 2021, when the electoral vote count in Congress was interrupted by the attack on the Capitol. The committee presented evidence and testimony on the preparations for the insurrection by extremist groups such as the Proud Boys and Oath Keepers, whose members have since been charged with sedition.

“What we established is that [Trump] participated knowing that the election was not fraudulent, that it was not stolen, and he helped orchestrate what occurred on Jan. 6,” Chair Bennie Thompson (D-Miss.) told reporters.

Reps. Stephanie Murphy (D-Fla.) and Jamie Raskin (D-Md.) led the questioning of witnesses Jason Van Tatenhove, a former spokesperson for the Oath Keepers, and Stephen Ayres, a rioter who pleaded guilty to entering the Capitol and told the committee that he only went there because Trump urged his supporters to do so in his speech.

“It was going to be an armed revolution,” Van Tatenhove said of the violence on Jan. 6. “People died that day…. There was a gallows that was set up…. This could have been the spark that started a new civil war.”

Van Tatenhove said he fears for the future if there is no reckoning for what happened Jan. 6.

Former Oath Keepers spokesperson Jason Van Tatenhove testified during Tuesday’s hearing that he fears for the future if there is no reckoning for what happened Jan. 6, 2021.

“If a president tries to instill and encourage, whip up a civil war among his followers, using lies, deceit and snake oil, regardless of the human impact, what else is he going to do if he gets elected again?” Van Tatenhove said.

The committee did not release the witnesses’ names before the hearing, citing concerns about safety. Committee Vice Chair Rep. Liz Cheney (R-Wyo.) indicated at the hearing that the panel has alerted the Department of Justice to information it received that Trump attempted to contact a witness who has spoken with the committee. The witness, who has not yet appeared in the hearings, did not take the former president’s call and informed the committee through a lawyer, Cheney said.

“We will take any attempts to influence witness testimony very seriously,” she said.

In laying out events connecting Trump to the violence of Jan. 6, the panel discussed a contentious Dec. 18, 2020, White House meeting in which the president’s allies tried to persuade him to sign an executive order to seize voting machines and appoint a special counsel to investigate fraud allegations. Raskin noted that in the approximately six-hour meeting, Trump heard White House counsel rip apart his election fraud claims, but still continued to publicly say that the election was stolen. The meeting devolved into shouting matches, threats of physical violence and demands for the allies to produce evidence of fraud they claimed existed.

Trump attorney Sidney Powell told the committee that during the Dec. 18 meeting, Trump said he was naming her special counsel to oversee an investigation over voter fraud and granting her a security clearance. But he did not appear to follow through.

“I was vehemently opposed — I didn’t think she should be appointed to anything,” former White House Counsel Pat Cipollone told the committee.

In the early hours of Dec. 19, shortly after the group left the White House, Trump tweeted, “Big protest in D.C. on January 6th. Be there, will be wild!” 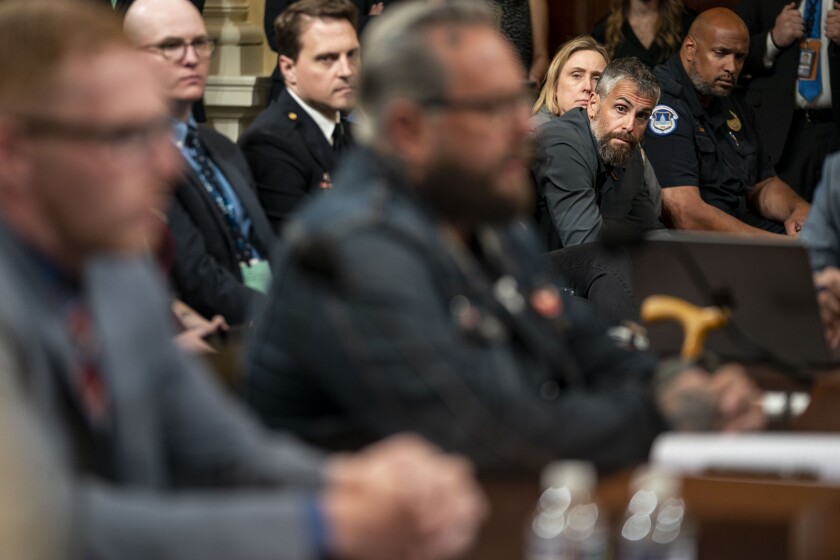 Michael Fanone, a former officer for D.C.’s Metropolitan Police Department who was beaten by rioters on Jan. 6, 2021, attends Tuesday’s hearing.

Trump’s words “reverberated powerfully and pervasively online,” Raskin said, noting that extremist groups took the president’s Dec. 19 announcement of a “wild” rally hours before Congress met to certify the election results as a cue to come to Washington to keep him in power through any means necessary.

The tweet “electrified and galvanized his supporters, especially the dangerous extremists in the Oath Keepers, the Proud Boys and other racist and white nationalist groups spoiling for a fight against the government,” Raskin said.

At the hearing, the committee showed video of far-right social media personalities talking about occupying Washington and storming the Capitol, and social media posts calling for violence. Those who run far-right online forums told the committee that Trump’s tweet created a “laser-like focus” on Jan. 6, Raskin said.

“The former president was for seemingly the first time speaking directly to extremist groups,” a Twitter employee granted anonymity by the committee testified of Trump’s tweets calling for people to attend his Jan. 6 rally.

While Trump made continued efforts to get Vice President Mike Pence to reject electoral votes on Jan. 6, an alliance of extremists coordinated an effort to storm, invade and occupy the Capitol, Raskin said, convincing a large and angry crowd who believed the election had been stolen from them to travel to Washington.

Extremist groups started aligning immediately after Trump’s tweet, Raskin said, referencing evidence such as an encrypted chat that included leaders of the Proud Boys and Oath Keepers as well as Republican operative Roger Stone, who revealed they were intent on hyping up pro-Trump events in November and December 2020, as well as the Jan. 6 rally.

The committee also laid out the relationship between Trump allies and the extremist groups. Former national security advisor Michael Flynn was a major player in the attempt to find evidence of fraud after the election and was escorted on Jan. 6 by a security detail made up of members of the Oath Keepers, several of whom have been charged with entering the Capitol. Stone had a long-standing relationship with the Proud Boys and helped raise money to put on rallies around Jan. 6.

Kellye SoRelle, an attorney for the Oath Keepers, told the committee that as Jan. 6 developed, Stone and far-right conspiracy theorists Ali Alexander and Alex Jones “became the center point for everything.”

Trump left the door to the Oval Office open so he could listen to a pro-Trump rally on Jan. 5 from the resolute desk, aides testified by video depositions. 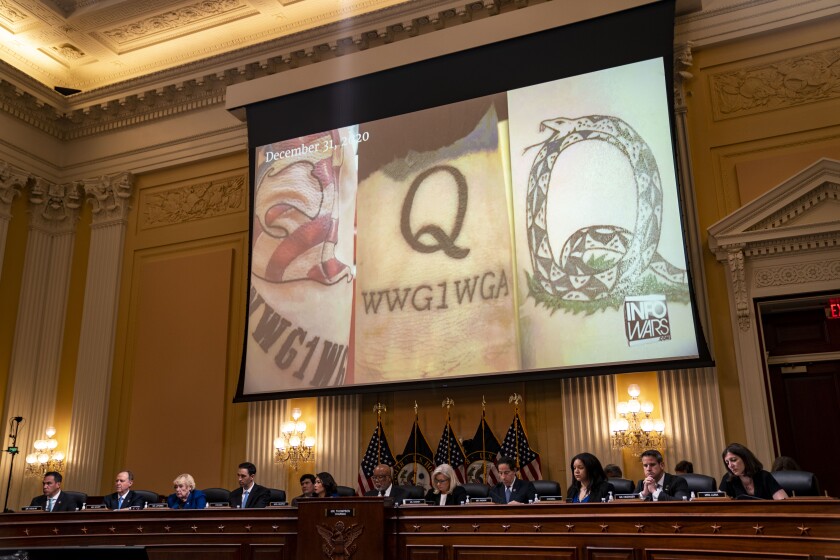 QAnon-themed tattoos are displayed on a screen during the Jan. 6 hearing Tuesday.

That night, Jones led the crowd in a chant of “1776!” Trump tweeted soon after: “Washington is being inundated with people who don’t want to see an election victory stolen by emboldened Radical Left Democrats. Our Country has had enough, they won’t take it anymore! We hear you (and love you) from the Oval Office. MAKE AMERICA GREAT AGAIN!.”

The former Twitter employee said social media traffic on Jan. 5 indicated that violence was likely on Jan. 6. The employee said they worried people would die.

“For months I had been begging and anticipating and attempting to raise the reality that if we made no intervention into what I saw occurring, people were going to die, and on January 5th I realized that no intervention was coming,” the person testified.

Murphy also played audio from a Republican conference meeting the night of Jan. 5, in which Arizona Rep. Debbie Lesko asked what security was in place for the next day.

“We also have, quite honestly, Trump supporters who actually believe that we are going to overturn the election and when that doesn’t happen, most likely will not happen, they’re going to go nuts,” Lesko said.

Murphy also made the case that Trump planned all along to urge those at the rally to go to the Capitol, presenting an unsent tweet in which Trump announced a march up Pennsylvania Avenue after the rally and a text from Alexander indicating that a march on the Capitol was premeditated.

“I will be making a Big Speech at 10AM on January 6th at the Ellipse (South of the White House). Please arrive early, massive crowds expected. March to the Capitol after. Stop the Steal!!” the draft Trump tweet said. The tweet that was sent is similar, but does not reference a march to the Capitol.

Murphy also showed a text between Jan. 6 rally organizer Kylie Kremer and My Pillow Chief Executive Mike Lindell talking about the plan for Trump to “unexpectedly” call for the march to the Capitol. Kremer told Lindell not to distribute that widely, because she would get in trouble.

Ayres, who was among the crowd but not part of an extremist group, said when Trump promoted the rally, he felt like he had to go to Washington to see the speech, but he never intended to go to the Capitol until Trump told his supporters to go. Ayres said the crowd thought Trump was going to go with them. 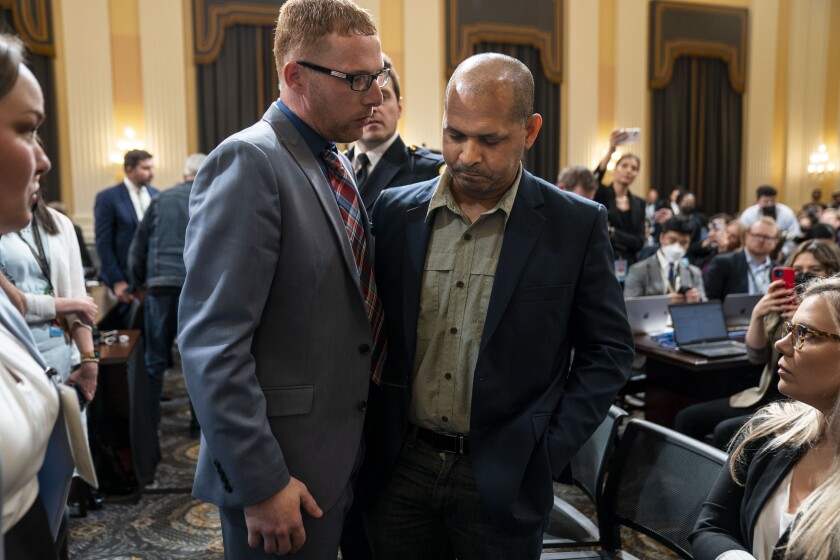 “We didn’t actually plan to go down there,” Ayres said. “Basically the president got everybody riled up and told everybody to head down.”

Ayers said he left the Capitol when Trump tweeted at 4:17 p.m. urging rioters to go home and said if Trump had tweeted earlier in the day the riot may not have happened.

“It definitely dispersed part of the crowd,” Ayres said. “We left right when that came out.”

Ayres said he trusted what Trump said after the election, a decision that led to criminal charges and resulted in the loss of his job and his home. He’s now taken the “horse blinders” off, he said.

“I was hanging on every word he was saying,” Ayres said.

Ayres paused after the hearing to apologize one by one to Capitol Police officers in the hearing room for his participation in the riot, which injured more than 150 officers, some permanently.

The committee also named Republican members of Congress who attended a Dec. 21 meeting focused on opposing counting votes of some states Jan. 6 in an effort to change the election outcome by preventing Biden from getting the votes needed to secure the presidency: Reps. Brian Babin of Texas, Andy Biggs of Arizona, Matt Gaetz of Florida, Louie Gohmert of Texas, Paul Gosar of Arizona, Andy Harris of Maryland, Jody Hice of Georgia, Jim Jordan of Ohio, Scott Perry of Pennsylvania and then Rep.-elect Marjorie Taylor Greene of Georgia.

In her opening remarks Tuesday, Cheney said that after six hearings, Trump’s allies are pushing a narrative that he was poorly served by his outside advisors, including California lawyer John Eastman, Powell and Perry, in an attempt to undercut the committee’s findings.

“This of course is nonsense. Donald Trump is a 76-year-old man. He is not an impressionable child. Just like everyone else in our country, he is responsible for his own actions and his own choices,” she said.

Trump had access to more information about election integrity than perhaps anyone else in the country, Cheney said, but chose to push forward with the lie that the election was stolen.

The committee’s final hearing, expected to occur next week, will focus on what was happening inside the Capitol during the riot, a time during which Trump made no public statements about the violence and did not speak with national security officials.

“Our hearing next week will be a profound moment of reckoning for America,” Raskin said. 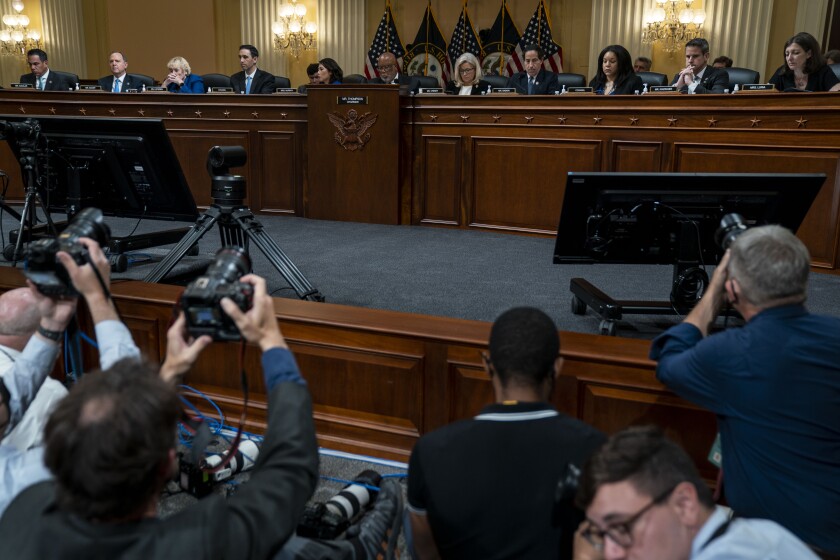 The seventh hearing of the Jan. 6 House panel focused on the role of extremist groups in the Capitol riot.