The global nuclear weapon stockpile could rise for first time since the Cold War, the Stockholm International Peace Research Institute says as its director warns of the increased risk of weapon use today.

Here are the latest updates:

An exhibition has opened in the Ukrainian capital Kyiv showcasing the paraphernalia of the war underway in the country.

From captured vehicles and collected remnants of missiles, all the way to slippers, toothbrushes and burner phones that the Russian military used and left behind, have been put on display at the National Museum of the History of Ukraine in the Second World War.

Head of Educational Department Dmytro Hainetdinov said that many of the objects were collected by the museum’s staff while visiting newly liberated areas in order to “highlight some particular facets of the war waged by Russia on Ukraine”.

“The purpose of this exhibition is to raise the awareness of people of this war with the help of authentic artefacts,” Hainetdinov said. 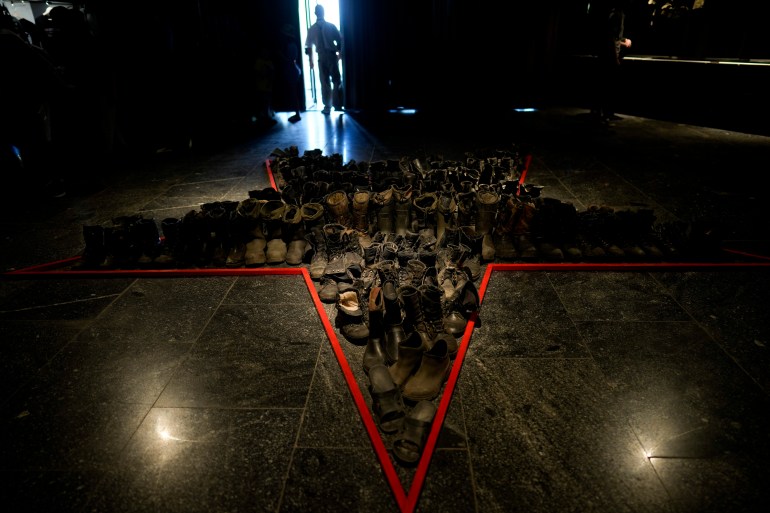 Russian boots are displayed at an exhibition in Kyiv, Ukraine, on Sunday, June 12, 2022. Objects discarded by the Russian military are part of an exhibition focusing on the devastation of the ongoing war [Natacha Pisarenko/AP]

The global stockpile of nuclear weapons could soon rise again for the first time since the Cold War due to global tensions, the Stockholm International Peace Research Institute (SIPRI) has said.

“Russia has even made open threats about possible nuclear weapon use in the context of the war in Ukraine,” SIPRI said in a summary launching its yearbook 2022.

“Although there were some significant gains in both nuclear arms control and nuclear disarmament in the past year, the risk of nuclear weapons being used seems higher now than at any time since the height of the cold war,” SIPRI Director Dan Smith said.

The past year saw a slight reduction in the total number of nuclear warheads to an estimated 12,705 worldwide. Around 90 percent of all nuclear weapons are held by the United States and Russia. 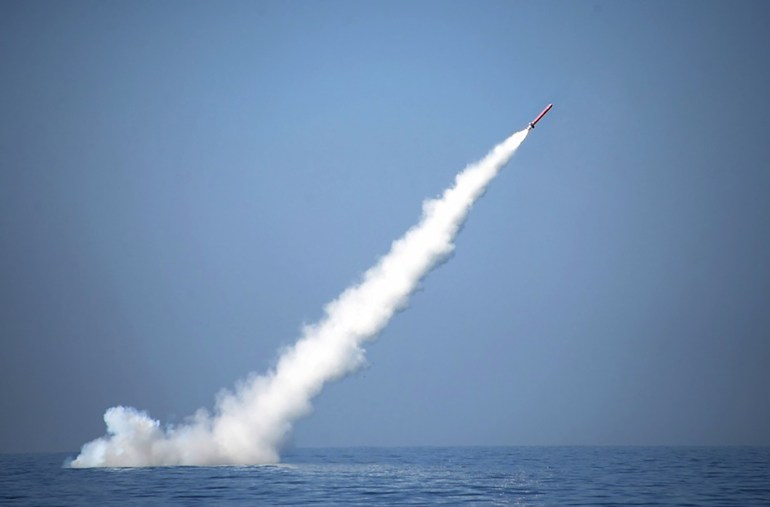 A nuclear-capable cruise missile is launched from a submarine during a test firing at an undisclosed location in Pakistan. Nuclear weapons in the world are set to rise after 35 years of decline as global tensions flare amid Russia’s war in Ukraine, SIRPRI said [File photo: ISPR/AFP]

Zelenskyy has said Moscow’s tactics had not changed in the war and that poorly-trained Russian reserves were now being deployed in the battle for Donbas, where “every metre” is being fought over.

“The Russian army is trying to deploy reserve forces in Donbas. But what reserves can they have now?” Zelenskyy asked in his daily address to the nation.

“It seems that they will try to throw into battle poorly trained conscripts and those who were gathered by covert mobilisation,” he said.

“Russian generals see their people simply as the cannon fodder they need to gain an advantage in numbers,” he added.

Zelenskyy has said that Russian casualties since the start of the war may pass 40,000 in June.

Speaking to the nation on Sunday in his 109th daily address since the start of the Russian invasion, Zelenskyy also reiterated Ukraine’s call for advanced air defence systems from the West.

He said that such defences could have averted many tragedies, including an air attack on Ternopil on Sunday which injured 10 people, including a 12-year-old girl.

Zelenskyy said that such incidents were replacing Peter the Great and novelist Leo Tolstoy as how the world now thought of Russia.

Russian forces have blown up a bridge linking the embattled Ukrainian city of Severodonetsk to another city across the river, cutting off a possible evacuation route for civilians, local officials have said.

Russian forces have taken most of the city, but Ukrainian troops remain in control of an industrial area and the Azot chemical plant, where hundreds of civilians are sheltering.

But the Russians had destroyed a bridge over the Siverskyi Donets River linking Severodonetsk with its twin city of Lysychansk, governor of Luhansk Serhiy Haidai said.

“If after new shelling the bridge collapses, the city will truly be cut off. There will be no way of leaving Severodonetsk in a vehicle,” Haidai said, noting the lack of a ceasefire agreement and no agreed evacuation corridors.

A new city sign painted in the colours of the Russian flag was unveiled on the outskirts of Mariupol, replacing a monument which had been in the blue and gold of Ukraine.

Russian flags were also being flown on a highway into the port city, which is now entirely under the control of Moscow-backed forces.

According to Kremlin-installed authorities, the seaport is now ready to operate as usual and was being used to ship goods to and from Russia.

For the news updates on June 12, please see here.