If you’ve been to San Diego, you’ve probably navigated Harbor Drive. It’s the busy street running from Point Loma to downtown that passes the airport and skirts the harbor. It makes a fine driving tour for anyone interested in architecture and California history, on land or water.

Here’s a 10-stop itinerary. To give it extra resonance, hunt down and read Max Miller’s “I Cover the Waterfront” (1932), a world-weary portrait (part Thornton Wilder, part Raymond Chandler, part Herman Melville) of this neighborhood nearly a century ago.

Start west of Lindbergh Field (the airport) with a site that launched thousands of sailors. To explore it best, turn north from Harbor Drive onto Laning Road.

In its first life, Liberty Station was the Naval Training Center, San Diego, where thousands of recruits learned Navy ways, beginning in 1923. After the Navy shuttered the training complex in 1997, the city teamed with developers to preserve and transform its Spanish Colonial Revival campus, which was influenced by Bertram Goodhue’s trend-setting designs for the 1915 Panama-California Exposition in Balboa Park. The project added dozens of restaurants, shops, housing, sports and arts groups — some of which are open at reduced capacity; check before you go.

Once you’re back in your car, head east on Harbor. Follow Harbor as it bends to the south. You’ll go about 4 miles before the next stop on our itinerary, a big public building on your left.

How to book a reservation to hike Fern Canyon Trail

The world’s most liveable cities for 2022 The San Diego County Administration Center, built in 1938, is a blend of Spanish Revival, Beaux-Arts and Modern styles designed by a foursome of local architects.

This landmark between Harbor Drive and Pacific Highway was built in 1938, a blend of Spanish Revival, Beaux-Arts and Modern styles designed by a foursome of local architects: Richard Requa (the master architect of the 1935 California Pacific International Exposition in Balboa Park); William Templeton Johnson (the designer behind the Junípero Serra Museum in Presidio Park and the Athenaeum in La Jolla); Louis J. Gill and Samuel Hamill. The sculpted woman in front, called “Guardian of the Water.” was done in 1939 by Donal Hord. In 2014 several local agencies combined to hide the parking underground and add the lawns, gardens and fountains of Waterfront Park, which flanks the grand old building. COVID-19 rules closed the Maritime Museum but Star of India is on display along Harbor Drive. The ship, an iron-sided 1863 windjammer, arrived in San Diego in 1927.

Now look right. On the waterfront side of the street, the 10 vessels of the San Diego Maritime Museum await inspection. COVID-19 rules forced closure of the museum on Dec. 5, but from the dock you can see a lot of the marquee attraction, the Star of India, an iron-sided 1863 windjammer built on the Isle of Man. The boat spent 25 years carrying passengers and cargo between England and New Zealand and an additional 20-plus years shuttling cannery workers and salmon between Oakland and Alaska. It arrived in San Diego in 1927, when Miller was collecting stories at the water’s edge. The museum staffers take it out once or twice a year, thus supporting their claim that the Star is “the world’s oldest active sailing ship.”

Just a few feet south along the water is a new feature. Portside Pier is a trio of restaurants, all owned by the same parent company: Ketch, Miguel’s Cocina and the Brigantine, which opened in July with open-air decks and views across the water. Currently only Ketch is open.

Portside Pier is a trio of restaurants, owned by the same parent company: the Ketch, Miguel’s Cocina and the Brigantine, which opened in July with open-air decks and views across the water. (Only the Ketch is open now, serving take-out from 11 a.m. to 7 p.m.) Take a moment to admire the Ketch’s metal exoskeleton. Is this indoor-outdoor design a geodesic dome on its side? A repurposed jungle gym? An homage to the tuna fishing fleets that used to mend nets near here? Architecture firm Tucker Sadler said the barrel-shaped steel-and-zinc central element next to the dome is intended to suggest “the casting of a fisherman’s net into a wave.” Anyway, it’s a pleasure to see. 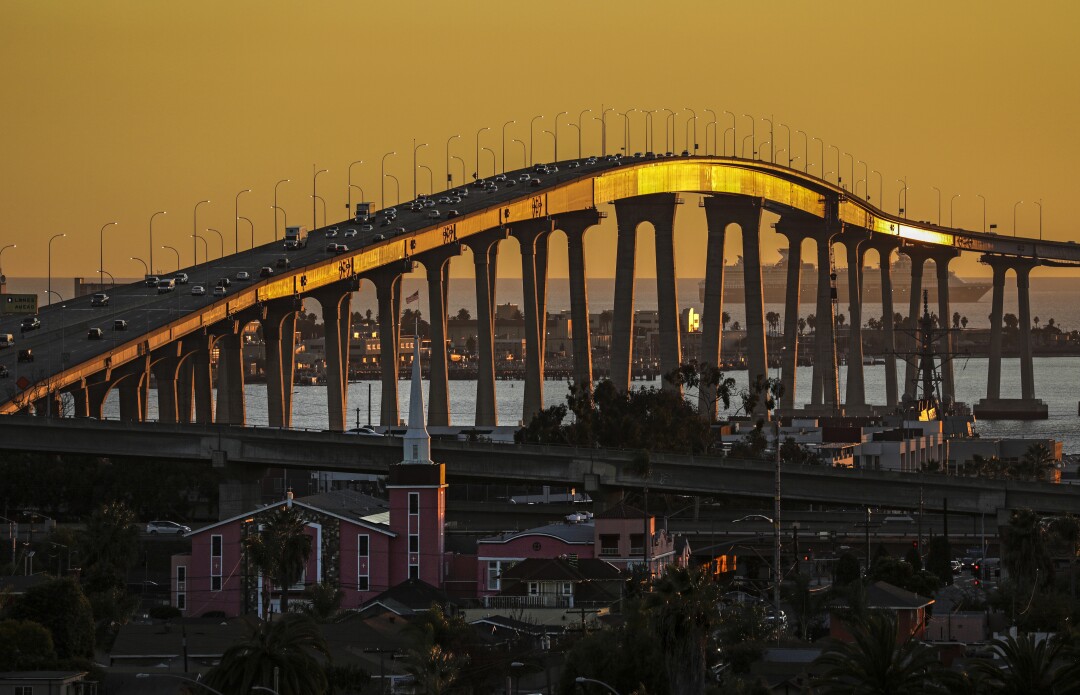 The Coronado Bridge, designed by Robert Mosher and completed in 1969, opened during the San Diego’s bicentennial year. The gently curving concrete span has become one of the city’s dominant icons.

From the Broadway Pier, and just about anyplace else along the waterfront, you can see the swooping, blue Coronado Bridge, designed by Robert Mosher and completed in 1969. (Mosher, who died in 2015, said state officials wanted to paint the bridge red until he talked them into blue.) Opened during the city’s bicentennial year, the gently curving concrete span has become one of San Diego’s dominant icons. Besides the vantage points along the waterfront, you can admire the 2.1-mile-long structure if you take the Coronado Ferry ($5 for a 15-minute ride) from Broadway Pier or the Convention Center to the Coronado Ferry Landing. The landing has about two dozen shops and restaurants, all open.

Just south of Broadway Pier is Navy Pier, our next stop. 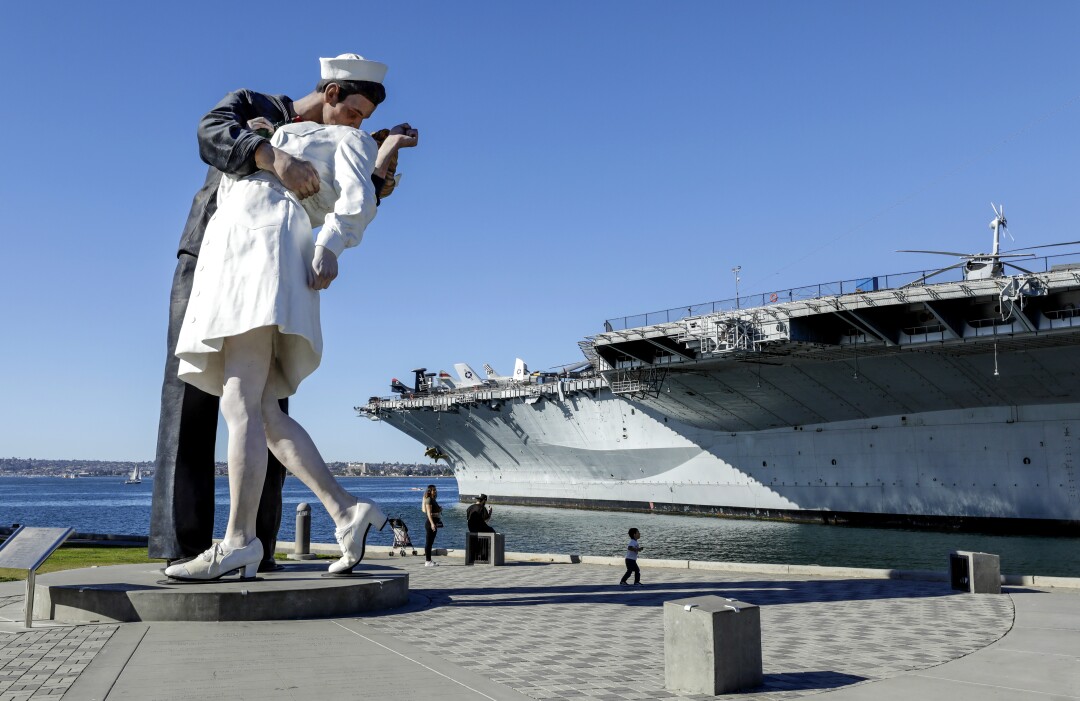 “Unconditional Surrender,” or “Embracing Peace” as it’s named on a sign at the base, is a kitschy sculpture by Seward Johnson on display at Tuna Harbor Park that resembles the famous photo of a sailor kissing a nurse in New York’s Times Square at the end of World War II. In the back is the USS Midway Museum which is temporarily closed.

The great metal hulk tied up at Navy Pier is the Midway, a retired aircraft carrier, later converted into a popular floating museum, now temporarily closed. The Midway was home to more than 200,000 sailors between 1945 and 1992. In design terms, think of it as an epic advertisement for function determining form and a great, gray example of adaptive reuse. It opened as a museum in 2004. If you pull into the parking lot at Tuna Harbor Park, a dollop of land just south of the Midway, you’ll see “Unconditional Surrender,” a kitschy sculpture by Seward Johnson that resembles the famous photo of a sailor kissing a woman in New York’s Times Square at World War II’s end. The Manchester Grand Hyatt is the biggest hotel by capacity in Southern California. It also boasts the tallest waterfront building on the West Coast.

About half a mile farther along, Harbor Drive veers inland and arrives at the foot of the Manchester Grand Hyatt, which has a 40-story tower designed by the San Francisco office of architecture firm Skidmore, Owings & Merrill and completed in 1992 to mixed reviews. It also has a 33-story tower designed by Martinez + Cutri Corp., added in 2003. That adds up to some 1,628 guest rooms, which makes this the biggest hotel (by capacity) in Southern California. The taller tower, which is the tallest waterfront building on the West Coast, might remind you of a 497-foot-tall pencil sharpener. Or a cash register. People exercise on the steps at the San Diego Convention Center. The building is probably best known for the roofline of the Sails Pavilion, a series of stretched fiberglass sheets. They can change color depending on the lighting, and their shapes echo the sails of boats in the harbor.

You’re now half a mile southeast of the hotel. This is where, in a normal year, Comic-Con happens. The long convention center building, designed by the Canadian architect Arthur Erickson, was built in 1989, expanded in 2001 and renovated in 2016. It is probably best known for the roofline of the Sails Pavilion — a series of stretched fiberglass sheets. They can change color depending on the lighting, and their shapes echo the sails of boats in the harbor. (Among Erickson’s other projects: the towers at downtown L.A.’s California Plaza; the Anthropology Museum at the University of British Columbia in Vancouver; and the Museum of Glass in Tacoma, Wash.) Petco Park, home of the Padres, was designed by the much-decorated architect Antoine Predock. It opened in 2004 and was praised for its intimacy and its incorporation into the cityscape.

This ballpark, home to the Padres, was designed by the much-decorated architect Antoine Predock. It opened in 2004 and was praised for its intimacy and its incorporation into the cityscape. It doesn’t hurt that the Pacific and the Gaslamp Quarter are close at hand. The complex has a decidedly Southwestern feel — perhaps not surprising, because Predock is based in New Mexico and has done academic and museum buildings throughout the West, including the dramatically pointed 1992 CLA Building at Cal Poly Pomona, which is now vacant. Most people can’t can’t get into Petco Park now, but you can still see its palm trees, palette of desert colors and the bronze statue of Tony Gwynn on the north side near J Street and 9th Avenue. Harbor Drive Pedestrian Bridge is 550 feet long and links the Convention Center to the East Village, Petco Park and the Gaslamp Quarter.

This bridge, designed by Safdie Rabines Architects and completed in 2011, links the Convention Center to the East Village, Petco Park and the Gaslamp Quarter by way of a 550-foot span with a 130-foot-high concrete pylon in the middle. The bridge goes over Harbor Drive and the train and trolley tracks. Harbor Drive ends with a whimper, not a bang, near the city limit between San Diego and National City. So stop here at this bridge. It looks great lighted at night.