We took a trip to Tatooine in the Disney Plus Star Wars show The Book of Boba Fett, but it won’t be our only visit to the desert planet in 2022.

Exiled Jedi Obi-Wan Kenobi is getting his own series later this week with Ewan McGregor returning to the role he played in the movie prequel trilogy. The first trailer for the Obi-Wan show dropped in March, followed by a new trailer for Star Wars Day.

Disney and Lucasfilm announced the series in 2019. Here are all the details we’ve learned since.

When is Obi-Wan Kenobi out on Disney Plus?

The series will kick off Friday, May 27 with two episodes. It was pushed back two days from the original date. Now it’s coming on the second day of Star Wars convention Celebration Anaheim, which runs May 26 to 29.

It will run for six episodes. Disney Plus generally drops episodes on a weekly basis, unlike the full-season drop approach Netflix takes for its shows.

Is there a trailer for Obi-Wan Kenobi?

The first trailer and imagery dropped in early March.

When in the Star Wars timeline is it set?

It’ll take place 10 years after Revenge of the Sith and nine years before A New Hope, in an era after the Jedi Order has been all but wiped out.

If you really don’t know, you should watch a few Star Wars movies. The quick version: Obi-Wan Kenobi is a Jedi master who first appeared on screen in 1977’s A New Hope, played by Alec Guinness. This movie saw him helping young Luke Skywalker take his first steps into the larger world of the Force. Later in that movie, Obi-Wan was struck down by his former apprentice Darth Vader, who was ultimately revealed to be Anakin Skywalker, Luke’s father and a Jedi turned to the Dark Side. 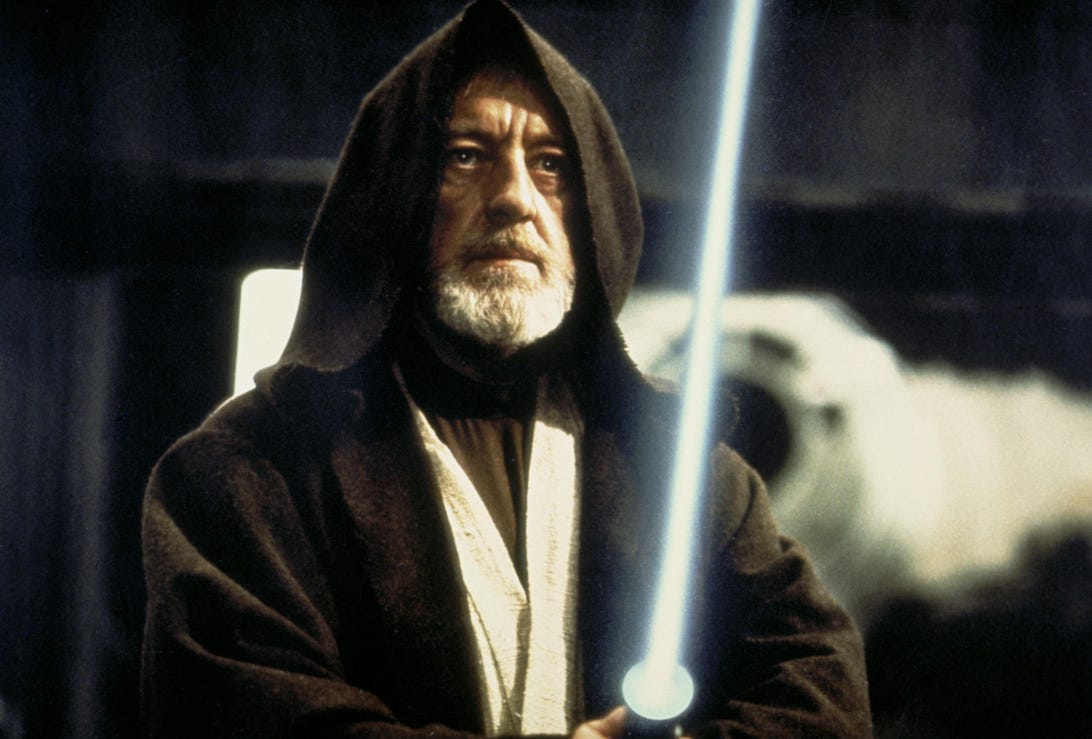 Obi-Wan, as he’s seen in A New Hope. He won’t look quite this old in the Disney Plus show.

Despite his death, Obi-Wan returned as a spirit (a Force ghost, in Star Wars-speak) to guide Luke in The Empire Strikes Back and Return of the Jedi. He even gave Rey a little help in The Force Awakens and The Rise of Skywalker.

The prequel trilogy, which kicked off with The Phantom Menace in 1999, brought in McGregor as a younger Obi-Wan and introduced us to his master Qui-Gon Jinn (Liam Neeson). Qui-Gon discovered Anakin on the desert planet Tatooine, but was slain by Darth Maul, and the responsibility of training the boy fell to Obi-Wan. 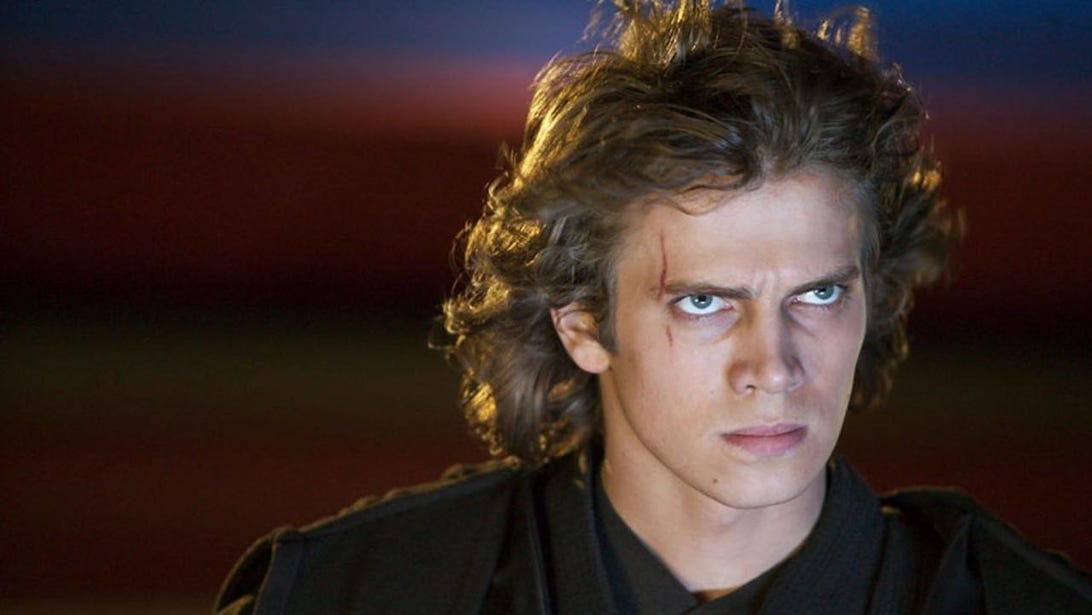 Anakin succumbed to the Dark Side in Revenge of the Sith and became Darth Vader, then helped Emperor Palpatine wipe out the Jedi as they established the Galactic Empire. Obi-Wan survived and fled to Tatooine with Luke, the son Anakin didn’t know he had, while Luke’s twin sister, Leia, went to live with the royal family of Alderaan.

Aside from McGregor returning as Obi-Wan, Hayden Christensen — who played Anakin in Attack of the Clones and Revenge of the Sith — will return as Vader. The actor rewatched all the movies, along The Clone Wars and Rebels, to prepare for his return as Anakin, told Entertainment Weekly in April.

“They did a lot with these characters in those shows. And they did further explore the relationship,” he said of Obi-Wan and Anakin’s roles in the shows. “There was interesting stuff there to learn about. It was great fun getting to go back and re-immerse yourself in this world that just continues to grow and become more and more vast.”

Joel Edgerton is back as Owen Lars (aka Uncle Owen).

Joel Edgerton and Bonnie Piesse will return as Owen and Beru Lars — better known as Luke Skywalker’s Uncle Owen and Aunt Beru. At this point in the timeline, they’re raising Luke far away from now-evil dad Darth Vader. We also see someone new playing a young Luke in the trailer.

The trailer shows Moses Ingram as Jedi-hunting Imperial Inquisitor Reva and what looks like Rupert Friend as the Grand Inquisitor, and it appears that Sung Kang is playing the Fifth Brother. The Dark Side-wielding Inquisitors were previously seen in CGI animated series Rebels and video game Jedi: Fallen Order — their fortress from the end of the game appears in the trailer too.

Reva is a new character, but the Grand Inquisitor and Fifth Brother previously appeared in the CGI animated series Rebels. Indira Varma, whom you might remember playing Ellaria Sand in Game of Thrones, is seen as an Imperial officer.

None of them has previously been in Star Wars, and Nanjiani told USA Today in November that his experience on the show was “absolutely amazing.”

“When you’re on set, you have to put out of your head that you’re in Star Wars, which is very hard to do because it really looks like you’re in Star Wars. I’m dressed like I’m in Star Wars,” he said. “The guy who I’m talking to looks a lot like Obi-Wan Kenobi. It was my first job outside of quarantine: I got vaccinated, went right to set and honestly had the best three months.”

In April 2021, Variety reported that Maya Erskine (seen in Hulu comedy PEN15) had been cast in the show. Her role is unknown.

There’s one other actor who’ll almost certainly show up, as suggested near the end of Revenge of the Sith.

“In your solitude on Tatooine, training I have for you. An old friend has learned the path to immortality — one who has returned from the netherworld on the Force. Your old master,” said Yoda as he and Obi-Wan go into exile. “How to commune with him, I will teach you.” 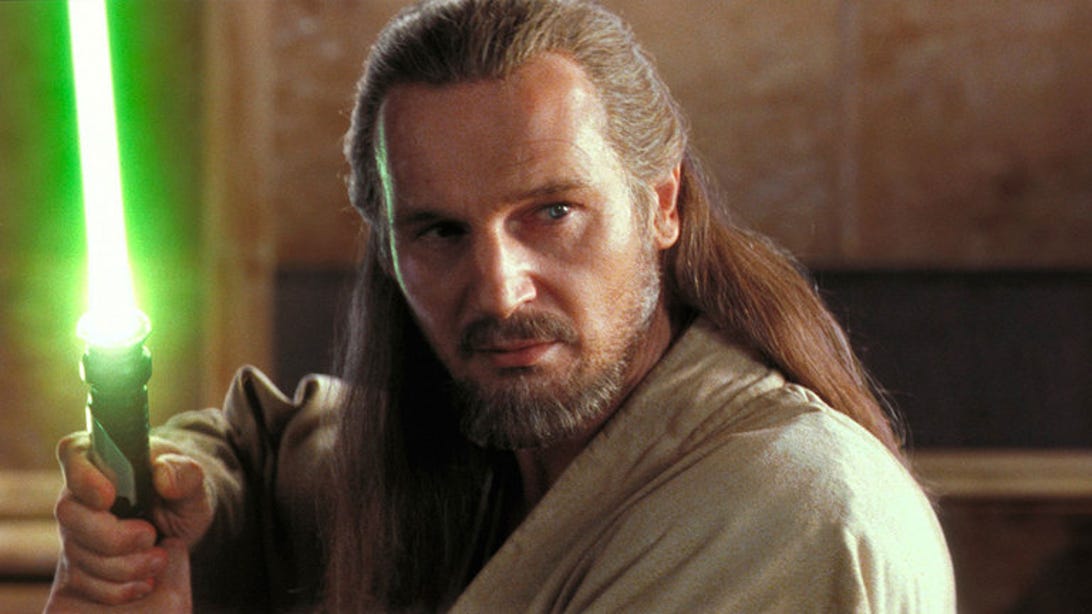 Qui-Gon Jinn could make an appearance, in ghost form.

Jedi master Qui-Gon Jinn died in The Phantom Menace, but Neeson returned to the role in The Clone Wars. He was the first Jedi ever to become a Force ghost and guide his allies in the material realm. By the time of the original trilogy, Obi-Wan has learned this skill, having been taught by Qui-Gon. We’ll presumably see this in the show. Neeson told Collider in October 2020 he hadn’t yet “been approached” about reprising the role, but it could happen.

Expect Jabba the Hutt and his goons, as well as some of the scum and villainy glimpsed in the Mos Eisley Cantina, to show up too.

Composer John Williams, who scored all nine Skywalker Saga movies and turned 90 in February, wrote the show’s theme, Variety reported in February. Outside the movies, he also wrote themes for Solo: A Star Wars Story and Disney Parks’ Galaxy’s Edge.

Natalie Holt, who was responsible for the music in last year’s Marvel Cinematic Universe series Loki, is handling the rest of the show’s music composition duties, according to Vanity Fair.

“It’s reflective, and it’s just entirely appropriate,” Holt said of the theme Williams composed. “It’s wistful, but there’s an element of hope to it. It’s doing something new and I think people are going to be really blown away by it.”

Who else is involved with this Star Wars show?

Deborah Chow, who helmed episodes 3 and 7 of The Mandalorian’s first season, will direct the Obi-Wan series, which was written by Joby Harold. Lucasfilm President Kathleen Kennedy, Michelle Rejwan, Chow, McGregor and Harold will serve as executive producers.

What do we know about the plot of Obi-Wan Kenobi?

“During the reign of the Galactic Empire, former Jedi master Obi-Wan Kenobi embarks on a crucial mission. Kenobi must confront allies turned enemies and face the wrath of the Empire,” reads Disney’s synopsis for the show.

We know Obi-Wan — known to the locals as Ben Kenobi — will watch over Luke from a distance while in exile on Tatooine. Don’t think too hard about the fact that Vader failed to look for his son on his home planet, that the Galactic Empire didn’t notice a young man with the name Skywalker or that Obi-Wan’s alias is pretty darn similar to his own name.

The trailer reveals that Imperial Inquisitors will hunt the exiled Jedi on Tatooine, and he’ll be forced to leave the planet at some point.

It’s unclear what kind of role Vader will play in this show, but concept art suggests he and Obi-Wan (or some other Jedi) are going to fight.

A Jedi is going to encounter Darth Vader, based on this concept art.

What can I watch and read to prepare for Obi-Wan Kenobi?

Helpfully, Disney Plus suggested a watchlist ahead of the show’s premiere. It includes the prequel movies — The Phantom Menace, Attack of the Clones and Revenge of the Sith — the 2008 Clone Wars movie and several arcs from The Clone Wars series.

Our calendar for the 7 days is looking 🔥 Whether you’re starting from scratch or catching up, we can all agree we’re excited for #ObiWanKenobi.

The Original series starts streaming May 27, only on Disney+. pic.twitter.com/4PwPMaBZ3s

The movie introduces Anakin’s apprentice Ahsoka Tano, while the series arcs highlight Obi-Wan’s complicated relationship with Mandalorian leader Satine Kryze, as well as a mission in which he goes undercover to stop a plot to kidnap Chancellor Palpatine.

Obi-Wan’s final battle with Maul takes place during this time, around two years before A New Hope. We’ve already seen how that goes down in the CGI animated series Star Wars Rebels. The Jedi could also reminisce about fighting in the Clone Wars, opening up the possibility of flashbacks (so we might see Christensen playing pre-Dark Side Anakin as well as Vader). 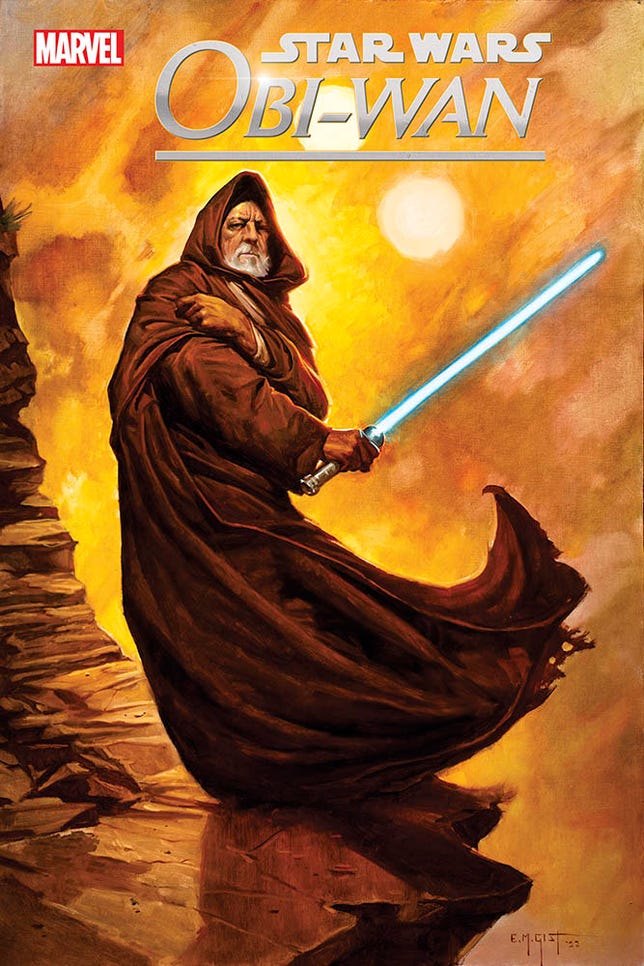 Beyond those, we’ve had a few canon glimpses of this period. In the first volume of Marvel’s main Star Wars comic series, Luke finds Obi-Wan’s journals following the Jedi’s death in A New Hope. These recount a few of his adventures on Tatooine, like saving Luke from Jabba’s goons, protecting Jawas from Tusken Raiders and rescuing Owen from Wookiee bounty hunter Black Krrsantan (who made his first live-action appearance in The Book of Boba Fett).

There’s also Marvel’s five-issue Obi-Wan comic miniseries, which will see him writing those journals during “the final days of his time on Tatooine,” the official Star Wars site revealed on Feb. 3. It sounds like the main story will be set after this show, with flashbacks to different points in his life. Disney loves synergy though, so it’s possible elements from the comic will appear in the show. The first issue came out earlier this month.

If you’re eager to get a sense of this time period, John Jackson Miller’s 2013 novel Kenobi is worth a read. It’s no longer canon because Disney rebranded many pre-2014 Star Wars stories under the “Legends” banner, but it reveals one of Obi-Wan’s adventures as he tries to blend in on Tatooine.