‘Doctor Strange 2’ Illuminati, Explained: Who Are These Elite Marvel Heroes?

“Stephen Strange. The Illuminati will see you now,” says Karl Mordo in Doctor Strange in the Multiverse of Madness, hinting at an encounter with old and new Marvel Cinematic Universe heroes.

The 28th MCU movie landed in theaters last weekend and sent the ex-Sorcerer Supreme (Benedict Cumberbatch), Avenger/Disney Plus star Wanda Maximoff (Elizabeth Olsen) and new hero America Chavez (Xochitl Gomez) on a wild ride through multiple realities. This brings them into contact with some iconic characters.

“The film wears its continuity lightly, using the multiverse concept to go large with cameos and twists on Marvel lore that will no doubt draw whoops of delight in packed theaters,” CNET’s Rich Knightwell said in his review.

Let’s step into a star-shaped portal and take a closer look at some of these fantastically SPOILERY cameos. We also have explainers for the movie’s ending and post-credits scenes, as well as a list of unanswered questions.

A murderous Wanda is determined to steal America’s ability to create doors to alternate realities, which will allow her to reunite with her lost sons, Billy and Tommy, by seizing control of the multiverse. America and Strange flee to a futuristic reality designated Earth-838. The MCU is Earth-616, which happens to be the same designation given to the mainline comic universe — suggesting each is considered the prime reality of its medium.

Seeking help from this world’s Strange, they discover he died heroically and has been replaced as Sorcerer Supreme by Mordo (Chiwetel Ejiofor). Earth-616 Wanda pursues her prey across realities, using forbidden Darkhold magic to possess the body of her Earth-838 counterpart. 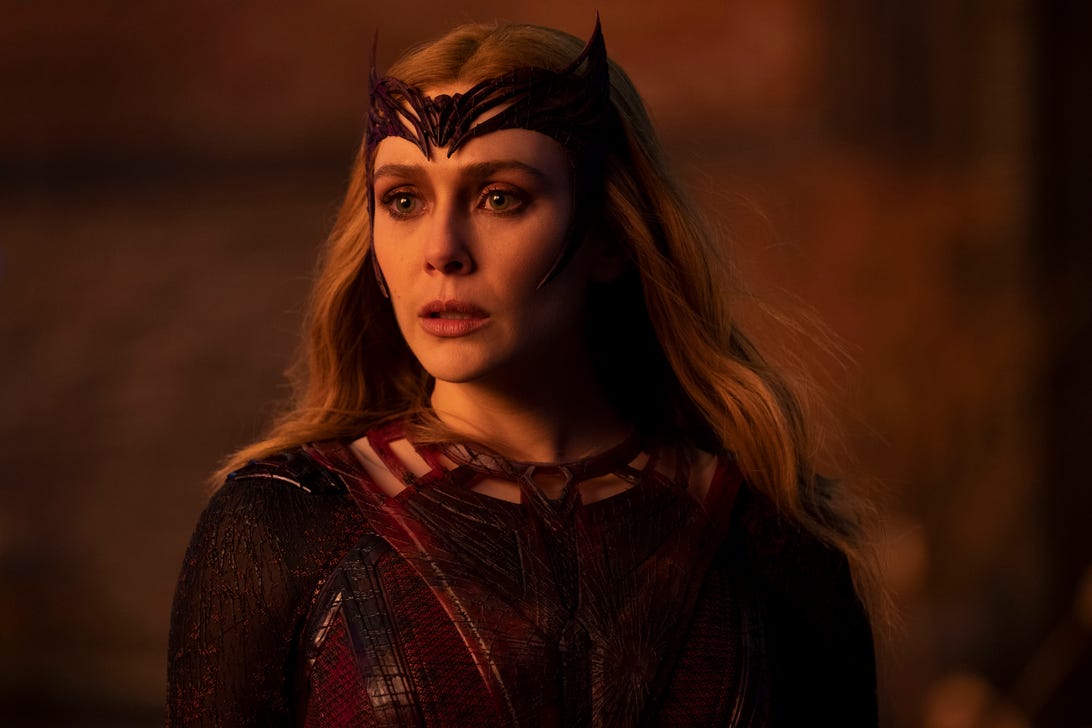 The charming-but-sneaky Mordo drugs America and Strange, bringing them to the Central Park headquarters of the Illuminati. This group of elite heroes will be familiar to longtime Marvel fans — let’s go through each one, and their horrible, horrible fates.

This is the one that probably made your theater scream with joy. Reed Richards is the leader of the Fantastic Four, Marvel’s first superhero team. The supersmart scientist can stretch his body into pretty much any shape. 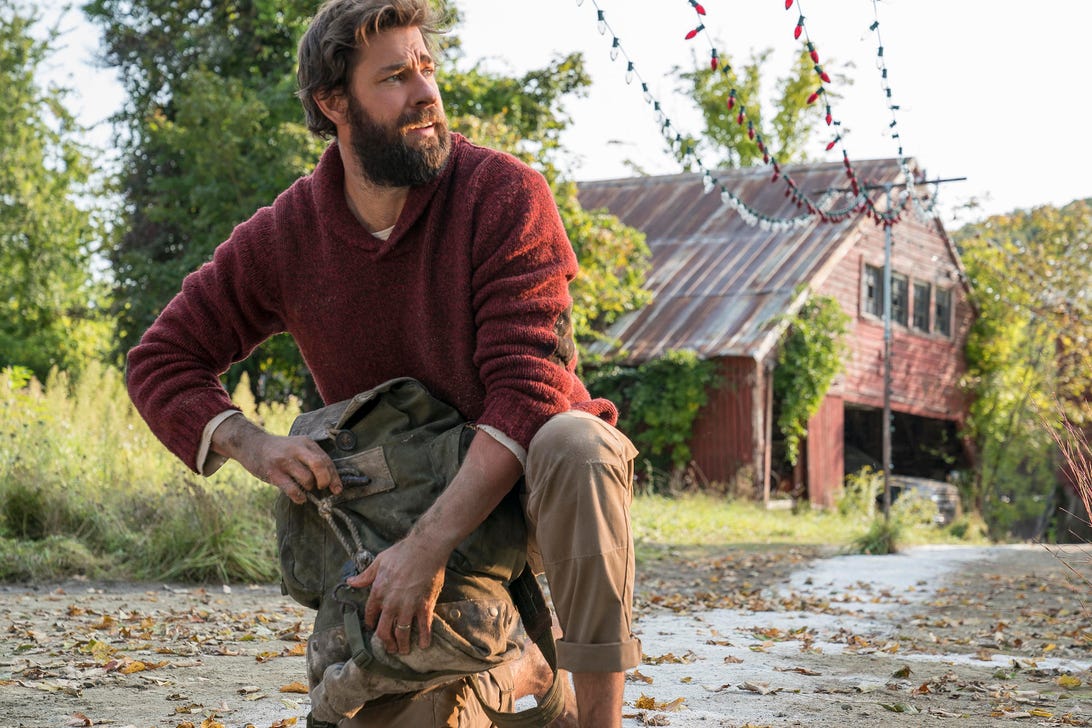 He’s played here by John Krasinski (of The Office and A Quiet Place fame), an actor whom fans have called to be cast in the role for years. Unsurprisingly, Krasinski is pretty much perfect as Reed, infusing the character with the right mixture of gravitas and warmth.

Ol’ Stretcho kindly explains the danger of Wanda’s multiversal madness causing an incursion — an apocalyptic event that occurs when one multiversal reality crashes into another. And then he encounters Wanda. 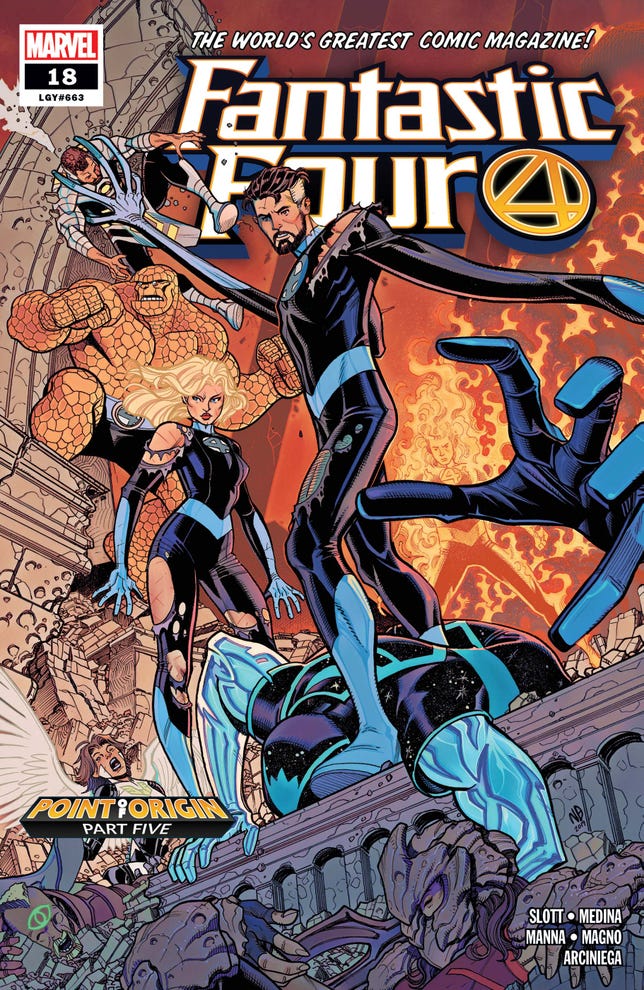 Reed doesn’t always have a beard, but he looks great with one.

“I have children of my own. I understand your pain,” he says, in an attempt to reason with her.

She asks if their mom is alive, to which he responds in the affirmative. In the comics, Reed is married to fellow FF member Sue Storm (aka Invisible Woman) and their children are Franklin and Valeria.

“Good. There will be someone left to raise them,” Wanda responds.

Sounds like a threat, because it is. Reed stretches out to restrain her, but she magically levitates him before tearing his body apart like string cheese and bursting his head. I guess Earth-838 has a Fantastic Three now.

We haven’t seen this character’s Earth-616 counterpart yet. It’s unclear whether Krasinski will reprise his role in the upcoming MCU Fantastic Four movie or if this was just a nod to fans who’ve been wishing for him to be cast. He’s perfect for this part, but it could be a little too obvious.

There’s something so reassuring about Patrick Stewart as Professor X.

This guy has the most cinematic history of the Illuminati members, with Patrick Stewart returning to the role he originated in 2000’s X-Men. This isn’t the same version of the powerful psychic mutant we saw in those movies, but it’s pretty thrilling to see Stewart coming back.

Marvel knows how to maximize Xavier’s emotional impact, putting the hero in his signature yellow hoverchair from the comics and giving us a hint of the ’90s X-Men animated series theme when he enters (the show is also getting a Disney Plus revival).

Xavier displays more compassion than his fellow Illuminati, who don’t trust Earth-616 Strange due to his Earth-838 counterpart destroying a reality in his Darkhold-assisted quest to defeat this reality’s Thanos.

“Just because someone stumbles and loses their way doesn’t mean they are lost forever,” he says.

Unfortunately, this empathy doesn’t help when he encounters Scarlet Witch. Xavier dives into her mind and tries to help Earth-838 Wanda take back control of her body, but her Earth-616 counterpart materializes on the mental plain and snaps the X-Men founder’s neck. This is mirrored in the physical realm.

Movies Coming in 2022 From Marvel, Netflix, DC and More

This is the fourth time Stewart’s Xavier has died — he’s disintegrated by a Dark Phoenix-possessed Jean Grey in X-Men: The Last Stand (though he transfers his mind into a comatose patient), Sentinels blast him offscreen in X-Men: Days of Future Past’s dystopian timeline (the past is rewritten shortly afterward, so it’s undone), and a clone of Wolverine fatally stabs him in Logan.

Inhuman king Black Bolt is played by Anson Mount, who previously portrayed the character in the bad 2017 Inhumans TV show (and more recently appeared in Star Trek: Strange New Worlds). As the leader of a near-human species, who gains random superpowers through contact with Terrigen Mist, his voice holds incredible destructive power. 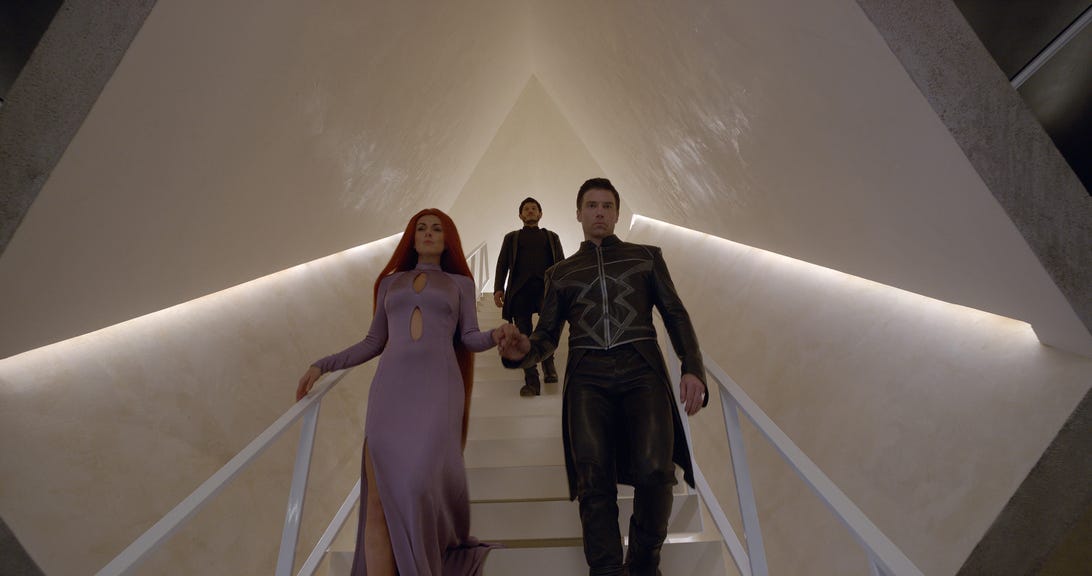 He used this ability to execute the Darkhold-corrupted Earth-838’s Strange at the behest of his fellow Illuminati.

When the Inhuman confronts Wanda, he suffers perhaps the most awful fate. She magically seals his mouth, causing him to freak out and scream internally, which makes his head explode from the inside. Excuse me while I have a little cry.

We don’t know where Earth-616 Black Bolt is — the show ended with him leading the Inhumans from their old home on the moon to Earth and making it their home. Don’t watch it though, it isn’t good.

It seems that in this universe, Carol Danvers’ fellow pilot, instead of her, was empowered by the Tesseract, taking up the mantle and becoming one of the world’s greatest heroes. This character was introduced in Captain Marvel, and is played by Lashana Lynch (also seen as the new 007 in No Time To Die). 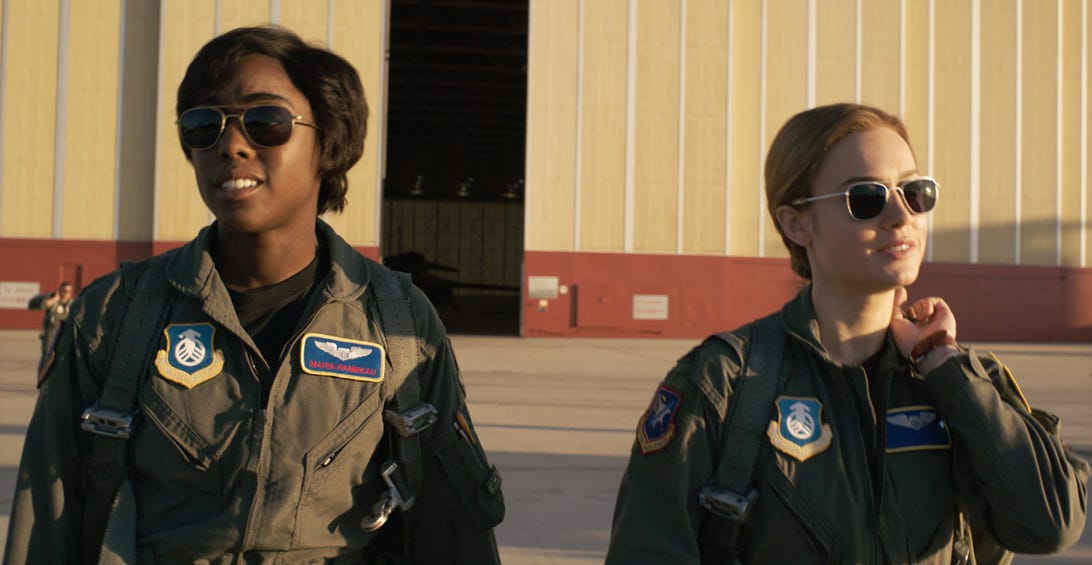 “Higher, further, faster, baby.” Maria Rambeau got to fly without a plane in Earth-838.

Earth-838 Maria is wearing a green Starforce uniform, suggesting that she might have remained an ally of the Kree  — Danvers turned against the alien race on Earth-616. She’s confident she can beat Wanda and puts up a decent fight, but ends up being crushed by a statue (it looks a bit like Jocasta, the female version of Ultron).

On Earth-616, Rambeau didn’t get powers. She was a founding member of Sword, an agency that defends the planet against extraterrestrial and extra-dimensional threats, and died of cancer sometime after Thanos’ genocidal Snap. Her daughter Monica gained energy based powers during the events of WandaVision, suggesting the Rambeaus are destined for superheroics.

Earth 838’s Peggy Carter has been empowered by the Super Soldier formula, likely in place of Steve Rogers (who became Captain America in Earth-616). We were previously introduced to Captain Carter in last year’s What If…?, but this is a different version of the character.

Captain Carter was pretty spectacular in What If…?

Hayley Atwell has played the non-powered Earth-616 Carter multiple times and voiced Captain Carter in the animated series, but it’s our first time seeing her playing a superpowered take on the character in live-action. Unlike her What If…? counterpart, she augments her abilities with a jetpack, and it’s extremely cool.

Unfortunately, she’s no match for Wanda. When Carter flings her Union Jack shield at the Scarlet Witch, it’s sent flying back at her and we see what happens when you fail to catch the vibranium disc. You get sliced in half at the waist, Darth Maul-style. 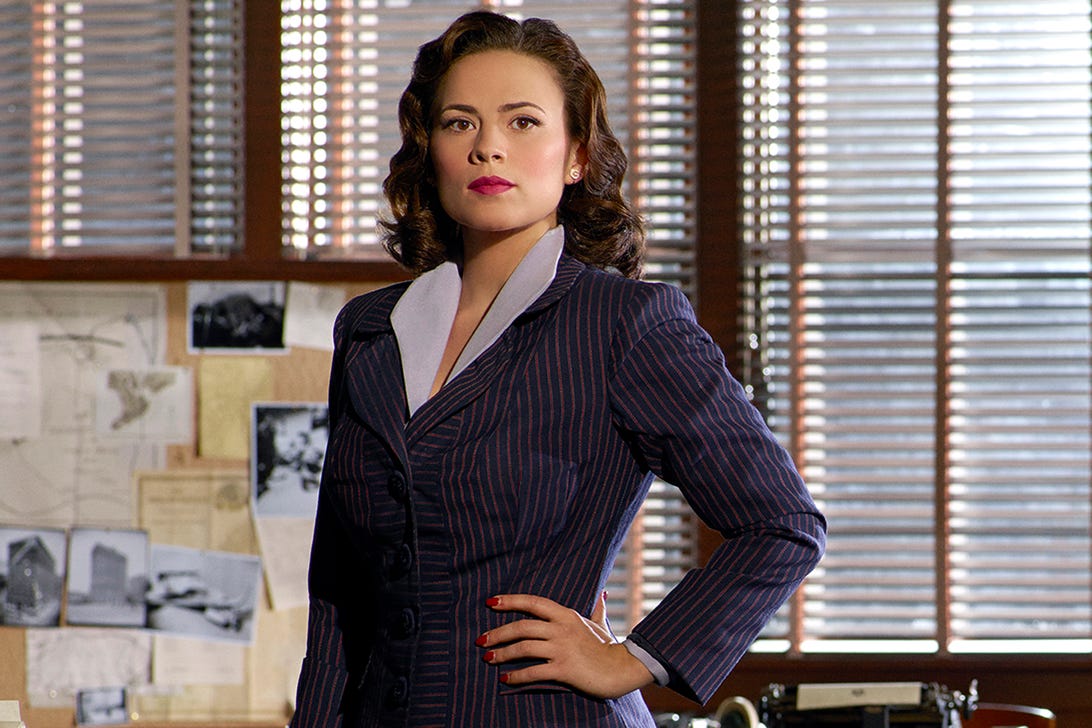 Peggy lived a life of excitement in multiple realities.

In Earth-616, Carter lived through World War II and had a bunch of adventures in her two-season TV show. She co-founded espionage organization Shield, grew old and died peacefully in her sleep in Captain America: Civil War. Steve Rogers also went back in time and married a different version of Carter in Avengers: Endgame.

We last saw the What If…? Captain Carter working as a Shield agent in that show’s season 1 finale.

In this reality, Mordo and Strange’s friendship was eroded when Mordo became intensely jealous of Strange’s power and influence. After the Darkhold-corrupted Sorcerer Supreme was killed by his allies, Mordo assumed the title and took his place among the Illuminati.

I Lost My Mind on Guardians of the Galaxy Roller Coaster

His jealousy bubbles up when Earth-616 Strange taunts him, and the pair battle. The more athletic Strange leaves Mordo stuck in a hole in the Illuminati throne room (shouldn’t have skipped leg day, Karl), and he ends up as the group’s only survivor. Lucky him, but also a bit embarrassing. 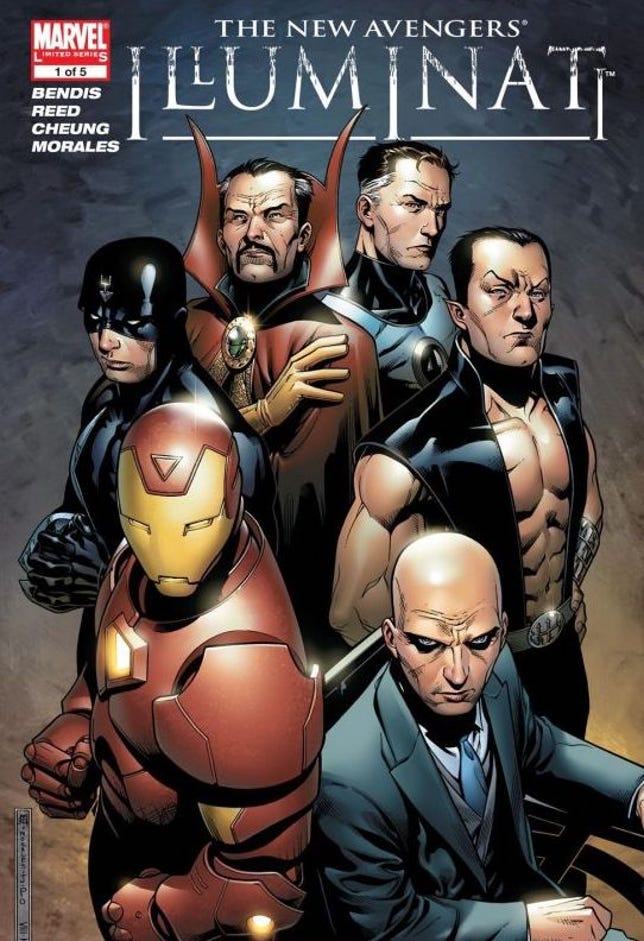 The movie Illuminati has some members in common with the original comic lineup.

Earth-616 Mordo became disillusioned with his fellow sorcerers after seeing their constant violation of the natural laws. In the first Doctor Strange’s post-credits scene, he steals a magic user’s energy and declares that there are “too many sorcerers” in the world.

In the comics, the Illuminati is a group of superhero leaders who meet and share information to avert disaster. The original roster included Tony Stark, Namor the Submariner, Reed Richards, Black Bolt, Doctor Strange and Charles Xavier.

Earth-838 had a similar lineup — it’s likely Marvel decided it was too early to bring Tony back in any universe after his heroic sacrifice in Avengers: Endgame. Atlantean prince Namor has yet to appear in the MCU, but it’s likely he’ll appear soon, given his long comic history with the Fantastic Four.