Before the session, everyone filled in a private survey online about how they were feeling (Picture: Getty/Metro.co.uk)

But I’ve never considered urban parklands as somewhere to immerse myself in nature or switch off.

After all, a stroll in the local park isn’t quite the same as a hike through the wilderness. I’m usually haring after my scooting toddler, or cramming in a quick run – neither are my first choice for a little me-time.

So I was intrigued to discover a new community project, ParkBathe, on Instagram, that was teaching Londoners the Japanese wellness technique of forest bathing in Crystal Palace Park – the local park that I visit every week.

I’d assumed forest bathing was a new wellness trend, but it turns out that it was originally launched in the eighties by the Japanese government to encourage frazzled workers to spend time in ancient woodlands, in attempts to prevent burn-out.

Yet I was sceptical – I’m sure it’s possible to reap the stress-busting benefits of forest bathing in remote woodland. But could it be adapted for a busy park in Zone 3?

Still, I was curious. As it turns out, I wasn’t alone.

At my first ParkBathe session earlier this month (May 2022) there were around 12 others, some first-timers like me, and other seasoned ParkBathers who kept coming back for more. Described as an hour-long slow, guided walk through the park, sessions are free, with the option to donate.

ParkBathe takes place in the wooded area along the edge of Crystal Palace Park that was once part of the Great North Woods, one of the UK’s last remaining ancient forests.

I hadn’t even realised there was ancient woodland in the park, having always stuck to well-trodden public paths and lawns.

Before the session, everyone filled in a private survey online about how they were feeling.

My answers revealed how anxious I was; keyed-up with the nervy feeling I always get before starting any new, unknown activity.

So it was a relief to discover there wouldn’t be any small talk or phone usage once ParkBathe began – we were asked to walk in silence to truly appreciate our surroundings. 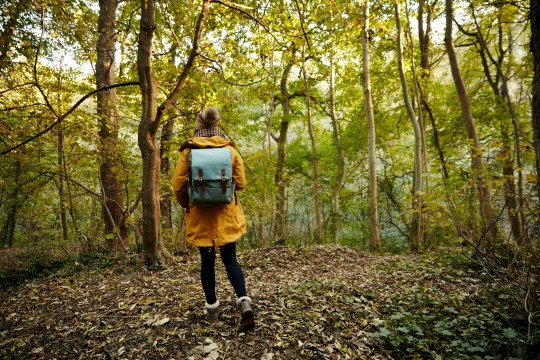 It was incredibly peaceful, yet it wasn’t an isolating experience (Picture: Getty)

ParkBathe founder, Vanessa Potter, explained we’d only be walking about 500m, so the glacial pace might feel frustrating at first.

And it was – at points it felt like we were barely moving. But after about five minutes of slow walking along a deserted woodland trail, I realised my heart rate had slowed. It also meant there really was no option for me but to look around, and not just fleetingly, to really see everything I was passing.

I found myself doing things I used to do as a child, like trying to identify different trees from their leaves. Something I wouldn’t ever think about on my usual trips to the park, keeping one eye on my phone.

The silence meant I wasn’t distracted either. There was no pressure to make small talk, so I couldn’t help but tune in to the rustling leaves and afternoon birdsong.

It was incredibly peaceful, yet it wasn’t an isolating experience – I was conscious throughout that I was appreciating the moment with others.

I realised, too, that I probably wouldn’t have felt safe venturing off the beaten track alone in my local park. But ParkBathe was giving me the opportunity to do just that, in a safe, supportive environment.

Occasionally we were asked to pause, cupping our ears to listen to the leaves, looking up at the tree trunks. Or to breathe deeply and slowly, to smell the wild garlic and damp earth.

Looking into the middle distance and foreground, focussing on the differences in the landscape around us was also encouraged at several points during the session.

I felt a little emotional realising that the things I was noticing in nature were there every time I go to the park, but my mind is always racing on to whatever I’m doing next so I don’t often pay my natural surroundings much attention.

It was the most peaceful hour I’ve had in a long time.

As the session ended, filling in the questionnaire again, my answers were completely different to what they’d been 60 minutes earlier – I felt unexpectedly clear-headed and relaxed.

Later, Vanessa explained that for most people, three ParkBathe sessions are enough to teach them forest bathing skills they can then use independently whenever they find themselves in a green space, even if only for a few minutes.

But many participants keep coming back for guided sessions because they appreciate the lasting wellbeing benefits they feel afterwards.

And it works, too – extensive research shows spending time in nature, ideally around two hours a week, can help lower stress levels and improve wellbeing.

I can understand why people keep coming back, too. Usually, after switching my phone off for an hour, I’d frantically check my emails.

But post-ParkBathe, I didn’t feel that urge, so I didn’t. Instead, I wanted to hold onto the peace I’d experienced a while longer as I walked home through the park, noticing the dappled sunlight and tiny midges buzzing above the lake.

I’m keen to ParkBathe again – it’s encouraged me to pay more attention to the nature I see in my day-to-day life. I’ve found myself slowing down on the school run to admire the purple wisteria over a doorway I pass daily, when usually, I’d have just kept going.

Taking tiny pauses like this to appreciate my surroundings allows me a few moments of calm in my day, and that’s a mindset I want to nurture.

MORE : Mental Health Awareness Week: How do we solve a problem like loneliness?

MORE : How to start conversations on mental health with someone you’re worried about

MORE : Sir David Attenborough named Champion of the Earth by the UN for life-long environmental work