Steve McQueen’s “Small Axe,” an anthology of five films centered on the lives of Black people in Britain, won best picture from the Los Angeles Film Critics Assn. on Sunday. It’s the first time the top prize has gone to a series, rather than an individual movie, and the selection spurred social media debate about the definition of film versus television (“Small Axe” is a joint production of the BBC and Amazon).

If anything, it’s a sign of what a peculiar year 2020 has been. Some may ask why give out film awards at all for a year in which movie theaters were largely shut down and the major studios pushed pause on significant releases. But the L.A. critics responded with a robust list of cinematic achievements, doling out acting prizes to the late Chadwick Boseman and his “Ma Rainey’s Black Bottom” costar Glynn Turman, “Minari” scene stealer Yuh-Jung Youn and “Promising Young Woman” star Carey Mulligan. Chloé Zhao was named best director for “Nomadland,” while Amazon’s “Time” won best documentary, Apple TV+’s “Wolfwalkers” took best animated film and the Russian drama “Beanpole,” a virtual cinema release, was the winner for foreign language film.

Times critic Justin Chang and columnist Glenn Whipp, who are members of the L.A. organization, discussed the results via email after the vote.

GLENN WHIPP: Going into our vote, Justin, I had no idea how we were going to handle Steve McQueen’s “Small Axe” film anthology. McQueen always intended for the movies to be shown on television, because he wanted them to be accessible. He wanted his mom to be able to see them. But three of the five movies premiered at the New York Film Festival this year. They are vibrant, serious cinema. Taken together, they are a landmark achievement in storytelling, an epic, intimate look at London’s West Indian community from the mid-1960s through the 1980s.

So I was thrilled when, right out of the gate, we gave our first prize to cinematographer Shabier Kirchner, who shot all five films, which vary quite a bit in style, though not in quality. Because the movies are thematically intertwined, I hoped we would honor them as a whole. The immersive, sensual party film “Lovers Rock” is my favorite, but each entry has its merits, and together, they form an unforgettable tapestry of culture and history.

With something as magnificent as “Small Axe,” labeling these movies “film” or “television” is irrelevant, particularly in a year when we’ve been forced to watch practically everything from inside our homes. Awarding the “Small Axe” series as our “best picture” was probably the most 2020 thing we could do. And the best news is that they’re all available for viewing, right now, on Amazon Prime Video. There’s no gradual rollout. They’re here, ready to be added to your viewing queue.

Frances McDormand in the film “Nomadland.”

JUSTIN CHANG: First off, Glenn: I voted for the runner-up, “Nomadland.” Second: I think “Small Axe” is brilliant cinema, for all the reasons you stated and more, and a best picture pick that I find by turns audacious and maddening, contradictory and inspired. I knew going into Sunday’s LAFCA meeting that McQueen’s anthology — or, as I think I shall describe it from now on, his tour de force of anthological filmmaking — would contend across the board. My initial prediction was that “Nomadland” would win picture and McQueen would win director. Instead, the group basically flipped the two, giving Chloé Zhao the director prize for “Nomadland” and bestowing best picture on all five “Small Axe” titles.

This is a first on a number of fronts. Never before has LAFCA given its top honors to a multipart work, much less a multipart work that was made for television and did not screen in commercial cinemas. That last part doesn’t bother me in the slightest — certainly not to the extent that it clearly bothered large swaths of the film Twittersphere, which likes to distract itself with tedious debates over whether David Lynch’s “Twin Peaks: The Return” is film, television or Memorex. More than a few social-media users erupted in fury, disbelief and, in some cases, delight at LAFCA for daring to break the rules — for confusing categories, blurring lines and (horror of horrors!) deviating from Amazon’s awards strategy. (“Small Axe” is being submitted for Emmys, not Oscars.)

I couldn’t care less about all that. This has been the blurriest of years, after all — a year when most of us saw new movies at home, not in theaters. The usual distinctions between cinema and television, already permeable to begin with, continue to melt away. And even in nonpandemic years, serving as a barometer of what the motion picture academy will do come Oscar time has never been LAFCA’s job or interest. My main issue is one of discernment. The “Small Axe” films have their individual strengths, but to my mind, some are clearly more impressive than others, and some stand more firmly on their own. I’d have liked to see the group single out one of them instead; like you, I’m partial to “Lovers Rock,” the boldest formal achievement of the five and also the most purely joyous picture McQueen has ever made.

At the risk of telling 14-year-old tales out of school, I’m reminded of our 2006 LAFCA meeting, the year “Letters From Iwo Jima” won best picture. Our group has a spread-the-wealth mentality, and some clearly wanted the award to be shared with “Flags of Our Fathers,” the other half of Clint Eastwood’s World War II diptych that year. One member put a stop to that thinking by very bluntly and correctly noting: “‘Letters’ is better. We voted for it because it’s better.” 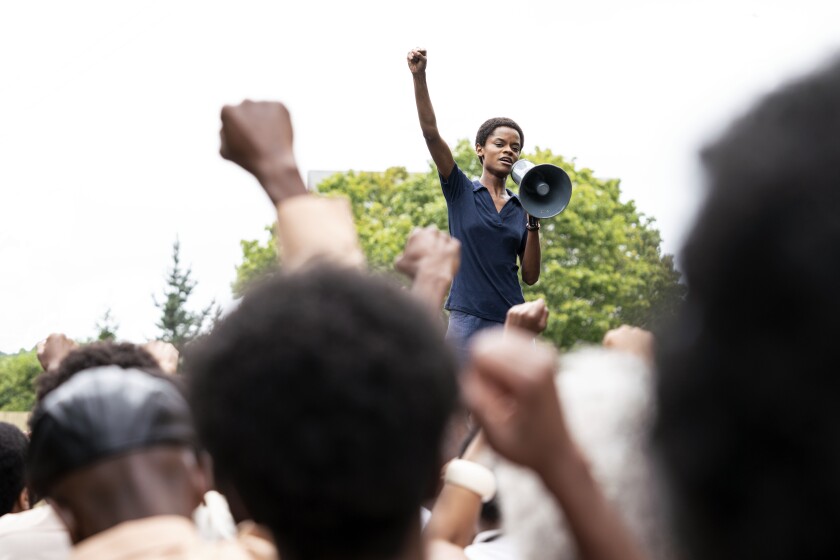 WHIPP: Generally in LAFCA votes, such appeals for multiple citations are nonstarters. Members are quite precise about what they’re feting and don’t want to dilute the power of their choices, which makes the lack of debate about collectively rewarding the “Small Axe” movies even more remarkable. Some of the 10 one-hour films that Krzysztof Kieslowski created for his legendary 1988 Polish television series “Dekalog” stand out more than others, but the power of the whole is the thing that matters. And that’s true for “Small Axe” too. To appreciate its achievement, it needs to be reckoned with in its entirety.

Of course, the “Small Axe” honors weren’t the only unusual thing about this year’s vote. We had nearly 50 members present Sunday. But instead of squeezing into a tight living room space, per usual, we were ticking off our votes virtually, a process that ended up feeling surprisingly similar to our usual methods of balloting. We still argued over procedural matters, did some cheerleading for our favorites and made each other laugh a ton. This may come as a surprise to some reading this, but critics have … feelings. And it was a beautiful thing to see all these colleagues over Zoom who we normally, randomly run into at festivals and screenings throughout the year.

The other striking thing was the number of movies we championed. Many great titles came up just short. Two of my favorites — Alexander Nanau’s searing documentary “Collective” about the human costs of systemic rot in Romania and Pietro Marcello’s sweeping, tragic “Martin Eden” — had to settle for runner-up nods for documentary and foreign language film, respectively. And yet, I couldn’t begrudge the group’s choices. For the people who say film awards should be punted this year, I’d offer the LAFCA winners as a rejoinder. As usual, we didn’t have nearly enough room to honor all the deserving work. 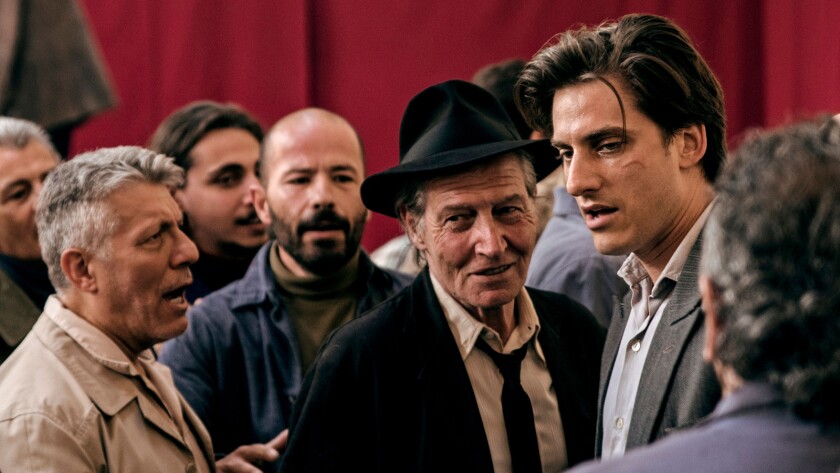 CHANG: That “Martin Eden” mention put a smile on my face too, Glenn; Marcello deserved more, but it felt like a hard-won victory for a movie that kept coming up in multiple categories throughout the day. And the picture that bested it for foreign-language film — the stark, haunting “Beanpole,” from a frighteningly talented 29-year-old Russian director named Kantemir Balagov — deserves every honor it gets. That was, in some ways, my favorite outcome of the day. Meanwhile, over in the documentary/nonfiction film race: I was as taken with “Collective” as you were, Glenn. But how could you begrudge its very narrow loss in that category to Garrett Bradley’s “Time,” an equally superb, wrenching film — and, though not set in Romania, another pretty searing portrait of systemic rot?

Every year, regardless of how much I may agree or disagree with our slate of winners, I always come away a little bit disappointed that it doesn’t represent the incredible specificity of our members’ individual tastes, or the sheer breadth of their favorites. How could it? Our process seeks consensus, and consensus is inherently reductive. And so you wouldn’t know, from our results listing just the winner and runner-up, that there were significant waves of support for movies as different as “The Nest,” “The Vast of Night,” “Palm Springs,” “Driveways,” “Lingua Franca,” “I’m Thinking of Ending Things,” “Miss Juneteenth” and the roundly admired “First Cow,” winner of the New York Film Critics Circle’s best picture prize last week.

You also might not guess that Pedro Costa’s ravishing “Vitalina Varela” — the single most recondite movie in contention for LAFCA honors this year, and in my opinion the best — came in third in the competitive cinematography race. Or that, in a lead actor field crowded with worthy favorites like Anthony Hopkins (“The Father”), Delroy Lindo (“Da 5 Bloods”), Luca Marinelli (“Martin Eden”) and Mads Mikkelsen (“Another Round”), one extremely sick critic was moved to vote for Christopher Abbott in “Possessor.” OK, I’ll confess: It was me. WHIPP: It was you, Justin, and I love it. When LAFCA members vote, we typically offer our top three choices in each category. (I did this, save for best picture, where I went solely with “Small Axe,” which I’m sure you’re now convinced was the only choice.) Often, it’s the third-place selections, cast from passion, misguided or otherwise, that are the most interesting. We should compile them all on our website. I mean, if you love “Jane the Virgin” and you somehow missed Gina Rodriguez’s dazzling supporting turn in Miranda July’s “Kajillionaire,” you need to find it. Immediately. Maybe she and Abbott could work together someday. They’re both movie stars.

CHANG: One of these years, I want us to pick the winners based purely on everyone’s individual third-place votes; the results would be something to see. Then again, our actors’ slate this year is nothing to scoff at. Our pick for supporting actress was Yuh-Jung Youn, one of South Korea’s best-known performers but a revelation to most American critics and audiences in “Minari.” Carey Mulligan won lead actress for her shape-shifting star turn in “Promising Young Woman,” narrowly beating out Viola Davis for “Ma Rainey’s Black Bottom.” That Netflix release, meanwhile, proved to be one of the most popular titles in the mix on Sunday, winning supporting actor for Glynn Turman and, last and certainly not least, lead actor for the late Chadwick Boseman. I wish we could’ve all been together in the same room for that moment, Glenn. Here’s hoping we will be next year.