If you’re like me, you’re hearing one word echoing through the playgrounds and preschools of America: “Liam!”

It’s not that Americans have rediscovered the underrated contributions of frontman Liam Gallagher to the 1990s Britpop band Oasis, and as far as I know, we’re still waiting for the actor Liam Neeson to bring his very particular set of skills to the next installment of the Taken franchise. Rather, it’s because for the fifth year running, “Liam” is the most popular name for baby boys in the US, according to data released on May 6 by the Social Security Administration. “Olivia” topped the charts for baby girls for the third straight year.

You can see the full list here, though if you told me these very classic names were from 1921, not 2021, I wouldn’t be surprised:

Whatever American babies are being named, from the hordes of Liams all the way down to the occasional “Davian” (number 1,000 for 2021), this fact is indisputable: There are fewer of them. In 2020, the general fertility rate in the US hit its lowest level on record, and provisional data for the first six months of 2021 showed a 2 percent decline in the number of births compared to the same time period in the previous year.

And what’s happening in the US is taking place in much of the rest of the world, as people are slower to marry and slower to have children.

That trend has helped contribute to what will be one of the dominant themes of the 21st century: the slowdown of population growth, especially in developed countries, and the eventual shrinking of the number of human beings on the planet. It’s a theme tackled by Jennifer Sciubba, an associate professor of international studies at Rhodes College, in her excellent new book 8 Billion and Counting: How Sex, Death, and Migration Shape Our World.

For thousands of years, human population numbers barely budged, increasing by just 0.04 percent a year between 10,000 BCE and 1700 AD, according to Our World in Data.

Then, as the Industrial Revolution and its resulting increase in human life expectancy began to spread around the world, population began growing exponentially, leading to the hockey-stick graph to end all hockey-stick graphs. 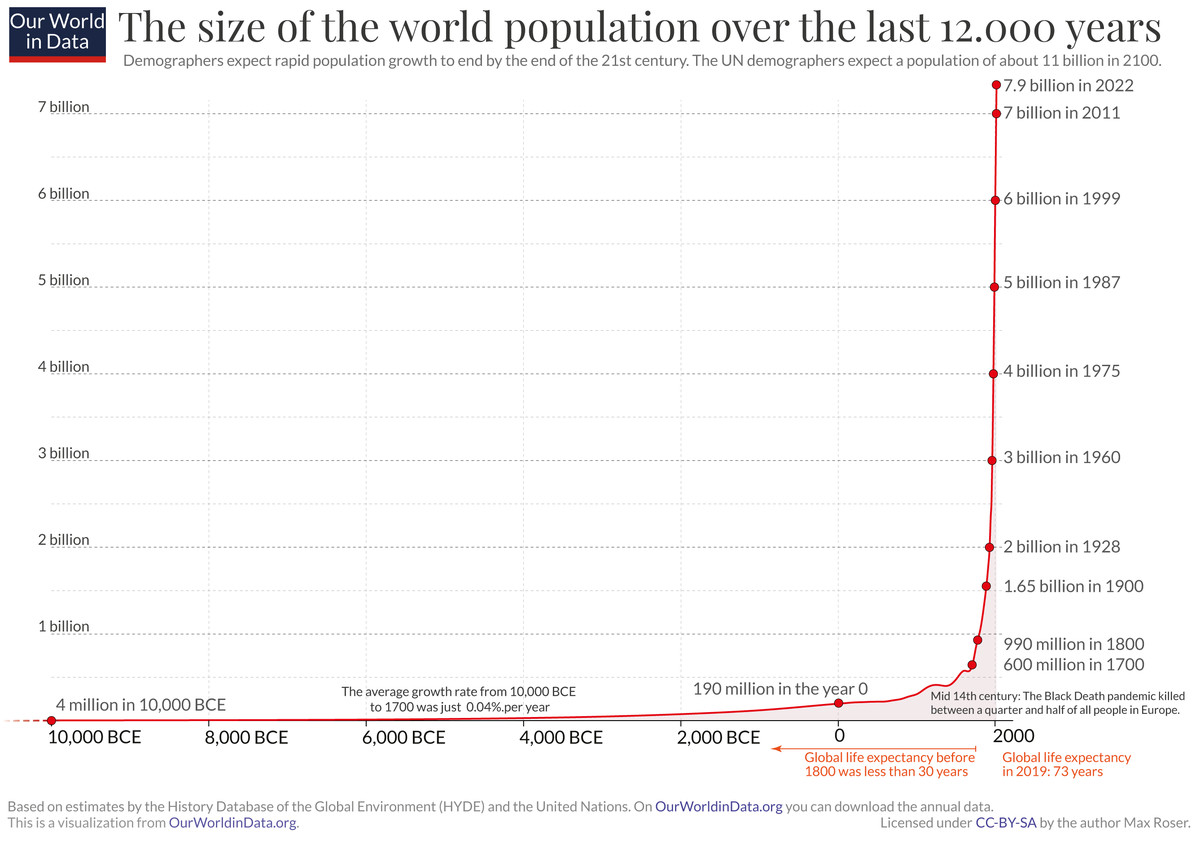 Courtesy of Our World in Data

Today, Sciubba writes, the world is on the precipice of 8 billion people, meaning that those alive today “represent around 7 percent of the 108 billion who have ever taken a breath.”

But the days of exponential growth are already behind us. In China, still the world’s most populous country, the number of babies born has fallen for five straight years, despite the government’s repealing of its one-child policy.

In South Korea, the birth rate has dropped to a record low 0.92, and in 2020 the country’s population fell for the first time in its history. In the US — which has long been more fertile than many of its developed peers — the fertility rate is already well below the replacement level of 2.1 children, and will likely continue falling.

While countries in sub-Saharan Africa still have huge and growing young populations and much higher fertility rates than more developed countries, the slowdown is universal, with “fertility trending downward pretty much everywhere,” Sciubba told me in an interview. We know we’re headed toward a world with smaller families and older people — and eventually, fewer of them.

Why? That’s a trickier question. Sciubba notes that while demography is the study of large-scale population changes, “at the end of the day it’s about individual people — just aggregated.” And individual people around the world — responding to shifting economic, cultural, and even religious factors — have made the decision to have fewer or even no children.

Governments can and will try to influence those decisions in a desired direction, but Sciubba told me that public policy — whether anti-natalist like China’s coercive one-child law or pro-natalist like the many countries that now pay citizens to have children — has generally taken a back seat to individual preference. Policies “may accelerate things for a time, but it doesn’t work” over the long term, she said.

If the global trend is largely moving in a single direction — fewer children — the impacts of changing demographics in the 21st century will be anything but shared.

Developed nations will be forced to grapple with the consequences of an aging and eventually falling population — Japan, Sciubba writes, “could eventually disappear altogether” if current trends hold. They’ll need to figure out how to keep their economies functioning with an ever-shrinking pool of young, productive workers, a problem no nation has ever faced before.

But even as fertility is expected to continue to fall, many nations in the global South still have decades of exponential population growth in front of them. Sub-Saharan Africa’s population is projected to grow sixfold over the 21st century, while by 2050 countries like Ethiopia and the Democratic Republic of the Congo will likely be among the world’s 10 most populous countries.

Those burgeoning young populations could be an economic boon for the world’s poorest region. The East Asian economic miracle was built in part by a demographic transition that led to a huge pool of young workers, greatly expanding per-capita productive capacity. We can hope that the 21st century’s dwindling number of young countries could enjoy the same demographic dividend.

There’s no guarantee, though. If young workers can’t be put to good use, that dividend can become a penalty. Many of the world’s youngest countries are also among the most fragile and the most susceptible to the worst effects of climate change. Masses of young people with little to do is a historic recipe for instability.

We need to move

If government policy is unlikely to significantly change the choices individuals make around reproduction, it can help soften the effects of demographic change. Sciubba suggests that aging, developed nations could raise retirement ages, reduce benefits, increase the percentage of the population that works, and increase immigration — all fairly controversial policies.

The last option is especially fraught. If the future is one of empty rich nations and overflowing poor ones, allowing far more people to move from the global South to the North could address both challenges. Think of it as globalization, just for people.

The problem, as Sciubba notes, is politics. Even in an age of unprecedented refugee flows, migration remains rare — as of 2015, just 3.3 percent of the world’s population was living outside the country where they were born. Political barriers to migration are mostly rising, not falling.

“While it makes sense on paper that we would do with people what we do with capital, and have them flow freely to where they would get the most bang for our buck, economic concerns are not the top concerns,” Sciubba told me. “It’s always politics.”

Every day, we actively choose to bring about the future we will have. Choosing to have fewer children is in many ways, as Sciubba notes, “a sign of human progress,” the result of the fact that many of us can have far more confidence that a child born today will make it to adulthood than our ancestors had through most of history. How the world deals with the consequences of those decisions will be a choice as well.

A version of this story was initially published in the Future Perfect newsletter. Sign up here to subscribe!