In what he was told was a debriefing, Konstantin Kudryavtsev also talked about others involved in the poisoning in the Siberian city of Tomsk, and how he was sent to clean things up.

But the agent was not speaking to an official in Russia’s National Security Council as he thought. He was talking to Navalny himself, who almost died after being poisoned in August.

Navalny has long been a thorn in the side of President Vladimir Putin, exposing corruption in high places and campaigning against the ruling United Russia party.

Putin essentially confirmed last week that FSB agents tailed Navalny but said if Russia had wanted him dead, “they would’ve probably finished it.” 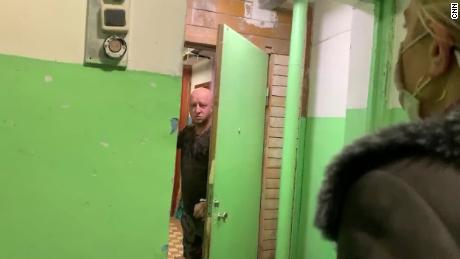 The Bellingcat-CNN investigation found that the FSB toxins team of about six to 10 agents trailed Navalny for more than three years. After identifying most of the team, CNN and Bellingcat tried to contact them and their superiors.

One man, Oleg Tayakin, slammed the door shut when questioned by CNN. Others did not respond.

At the same time, Navalny was also making calls. To begin with, he told the agents who he was, and those he contacted immediately ended the call. For the final call to Kudryavtsev, his team decided on a different approach: a sting operation.

How Navalny did it

Navalny, who is still recovering at a secret location in Germany, posed as a senior official from Russia’s National Security Council tasked with carrying out an analysis of the poisoning operation. His phone number was disguised as that of the headquarters of the FSB, according to Navalny’s team and a recording of the call later provided to CNN and Bellingcat.

After Kudryavtsev confirmed his identity, Navalny said he’d been tasked with getting “a brief understanding from the team members: what went wrong, why was there a complete failure in Tomsk with Navalny?”

Kudryavtsev’s responses in the 45-minute call provide the first direct evidence of the unit’s involvement in poisoning Navalny.

At times he is clearly apprehensive about talking on an unsecured line but Navalny, speaking at times in a brusque and urgent way, persuades him that senior officials are demanding a report immediately and says that “all of this will be discussed at the Security Council on the highest level.” 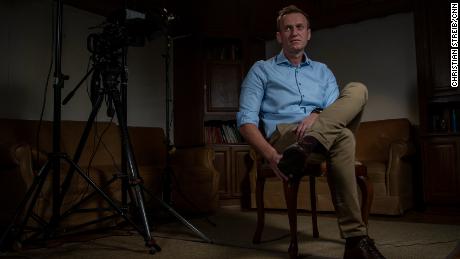 The FSB on Monday issued a statement claiming that a video of Navalny’s conversation with Kudryavtsev, posted by the opposition leader on his YouTube channel, was a “fake” facilitated by foreign intelligence.

“The so-called investigation about actions allegedly taken against him [which was] published online by [Alexey] Navalny is a planned provocation aimed at discrediting the FSB of Russia and employees of the federal security service, which would not have been possible without the organizational and technical support of foreign special services,” the statement reads, according to state news agency TASS.

The FSB has launched a “check” of Navalny’s investigation and will give “a procedural assessment” following its results, the statement said.

Why underwear was targeted

Most dramatically Kudryavtsev provided a detailed account of how the nerve agent was applied to a pair of Navalny’s underpants.

Navalny asked: “What item of clothing was the emphasis on? What is the most risky piece of clothing?”

Navalny followed by asking exactly where the Novichok was applied — the inside or outside seams.

“The insides, the crotch,” replied Kudryavtsev. 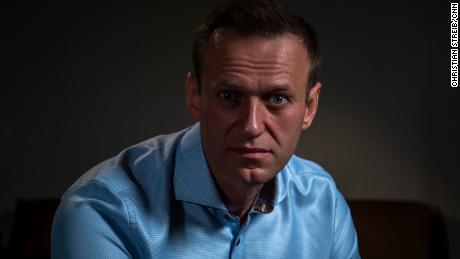 Toxicologists consulted by CNN say that if applied in granular form to clothes, the Novichok would be absorbed through the skin when the victim begins to sweat.

They say that, in this instance, it appears the assailants used a solid form of the nerve agent, rather than a liquid or gel as had previously been detected in the attack against former double agent Sergei Skripal in the United Kingdom.

The investigation by Bellingcat and CNN used thousands of phone records plus flight manifests and other documents obtained by Bellingcat to track the team of toxin experts. It established that, on the night the Novichok somehow got into Navalny’s hotel room, there was a ping from a cell phone belonging to one of the toxin team, Alexei Alexandrov, just a few hundred yards from the hotel.

CNN cannot confirm that Kudryavtsev was also in Tomsk when the poison was applied. But the call showed he had intimate knowledge of what was done and that he was involved in the cleanup operation to ensure there were no traces of Novichok left after Navalny had left the hospital. 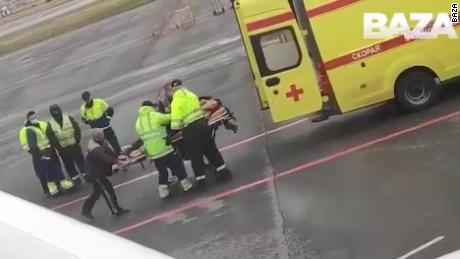 Navalny fell suddenly ill on a flight home to Moscow and the pilot diverted to Omsk, where he received lifesaving emergency treatment from paramedics.

Had the plane flown on to Moscow, Navalny would almost certainly have died, according to experts in toxicology consulted by CNN.

“[We] didn’t expect all this would happen. I’m sure that everything went wrong,” Kudryavtsev added — suggesting that the FSB’s intent was to kill Navalny, as many toxicologists familiar with Novichok have said.

When pushed as to whether the wrong dose of poison could have been administered, Kudryavtsev countered: “As I understand it, we added [a] bit extra.”

Kudryavtsev’s background suggests he is a specialist in chemical and biological weapons. He graduated from the Moscow branch of the Russian Academy of Chemical Defense. Bellingcat has established he later worked at the 42nd center of the Ministry of Defense — its biological security research center.

The Bellingcat-CNN investigation, that also involved German magazine Der Spiegel and Russian online publication The Insider, had already established through flight manifests that Kudryavtsev had flown to Omsk on August 25, five days after the poisoning.

“When we arrived, they gave them to us, the local Omsk guys brought [them] with the police,” Kudryavtsev said on the call. He added they had applied solutions, so that there were no traces left on the clothes.

“So there won’t be any surprises with the clothes?” asked Navalny.

“That’s why we went there several times,” Kudryavtsev replied.

Navalny and his team have several times demanded that his clothes be returned to him, but Russian authorities have refused.

Later, Kudryavtsev says, “I was told to work precisely with the underpants, on the inside.”

Navalny asked: “Who said that? Makshakov?”

Stanislav Makshakov is a scientist identified in the investigation as the official in charge of the toxin team, which is based at the FSB’s Criminalistics Unit on the outskirts of Moscow. He previously worked as a colonel at the Shikhany Institute, a Soviet and later Russian research institute on chemical weapons.

The investigation published last week established details of the toxin team’s communications and travel, which showed they had shadowed Navalny on more than 30 trips outside Moscow since 2017. The data also revealed high-level contacts between the toxin unit and laboratories in Russia specializing in researching nerve agents. 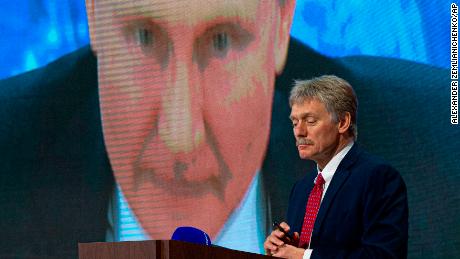 Putin and other Russian officials have dismissed the Bellingcat-CNN investigation as part of a campaign orchestrated by Western intelligence agencies. On Friday, Putin said it represented a type of “information warfare” — describing the investigation as “a dump where everything is being dumped, dumped, dumped in hopes that it will make an impression on the citizens, instill mistrust towards political leadership.”

Kremlin spokesman Dmitry Peskov acknowledged a surveillance operation on Navalny because of — as he put it — “the growing ‘ears’ of foreign special services.”

What the agents, and Navalny, saw

Navalny told CNN Monday that he did not believe the new revelations would lead to an investigation in Russia. “It has become so obvious that it was Putin personally who was behind this,” he said.

He added that he was stunned by talking to Kudryavtsev. “I was amazed of course and couldn’t believe it,” he said. “Simultaneously because of my luck and the way he so routinely says phrases like ‘the job was done well.’ He clearly does not consider himself a member of an assassination team, just an ordinary employee.” 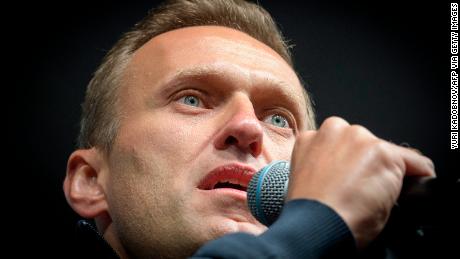 In an almost surreal moment on the call, Navalny commiserated with Kudryavtsev that he had survived.

He went on: “You’ve been going on so many trips with Navalny — to Kirov in 2017 — how do you evaluate his personality?”

“Very careful, scared of everything — on the one hand,” Kudryavtsev replied. “But on the other hand — he goes everywhere and so on. Changes rooms sometimes, very careful about that.”

He was then asked whether Navalny might have recognized any of the toxin team.

“That would be unlikely, we are very strict about that, changing clothes and all,” he said, adding that team took different flights when following Navalny across Russia.

Kudryavtsev appears to have been proud of the team’s security measures. “No-one filmed, no-one else saw, this is always excluded.”

He was almost certainly right in that respect. Navalny told CNN he did not recognize Kudryavtsev or other members of the team when shown their photographs earlier this month. But this investigation has shown that the FSB toxins team from the Institute of Criminalistics left plenty of other evidence of their movements, communications and activities.

Among that evidence, Kudryavtsev’s cell phone number — through which he inadvertently allowed Bellingcat and CNN to complete the picture of Navalny’s poisoning by the Russian state.

CNN has reached out to Kudryavtsev, Makshakov and the Kremlin for comment.