A woke Amazon staffer worked himself to tears over the online retailer’s decision to sell a children’s book that likens being transgender to pretending to be a walrus.

The staffer’s outburst occurred during a meeting allegedly held by Amazon leadership to address the ‘trauma’ some employees endured from the success of children’s book Johnny the Walrus, written by conservative author Matt Walsh.

‘Im sorry, I want to preface this…’ the unidentified staffer says during an online meting the meeting as he wipes away his tears. ‘This is really tough content.’

Johnny the Walrus was written by conservative political commentator Matt Walsh. The book quickly became one of Amazon’s Best Sellers in LGBTQ+ Books, before being removed from that categorization.

Workers at the meeting hinted they’d like to see it banned from the platform altogether. 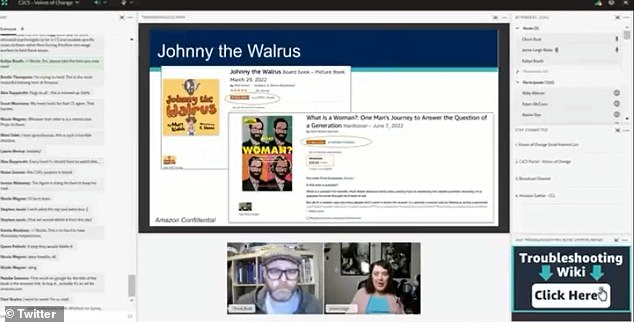 The undated meeting begins with the host warning employees that they are aware the content in the book is ‘traumatic’ for transgender individuals.

He explained that Amazon has received feedback from customers and staff about the Johnny the Walrus and asked employees to refrain from complaining about it as the appropriate departments are already aware of the issue and taking action.

He then shared feedback from a customer who alleged the book teaches children to ‘kill transgenders’ or ‘bully them into committing suicide.’

‘The story is about a kid who likes to pretend he’s different things and one day he pretends he’s a walrus and the community tells him he either has to be a human or he has to be a walrus or their going to kill him,’ the customer, who identifies as a member of the LGBT community, said in her formal complaint to Amazon. ‘He can’t be both. He can’t pretend anymore.’ 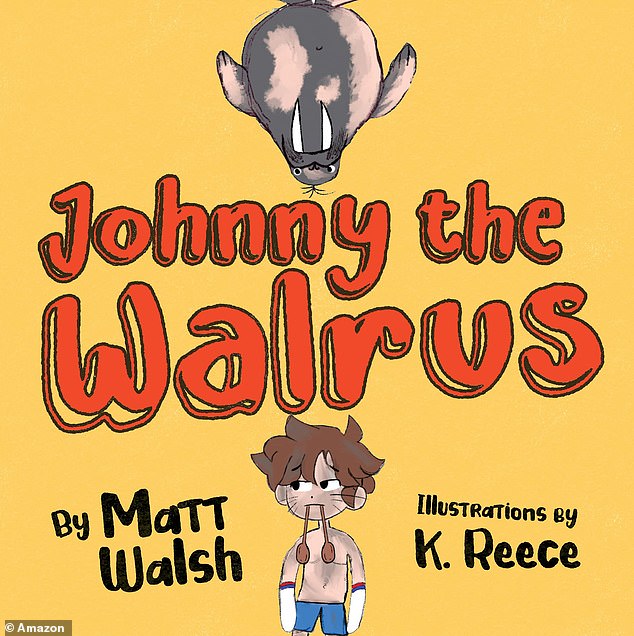 During the meeting, which discussed Matt Walsh’s Johnny the Walrus, Amazon shared a complaint from a customer who alleged the book teaches children to ‘kill transgenders’ or ‘bully them into committing suicide’ 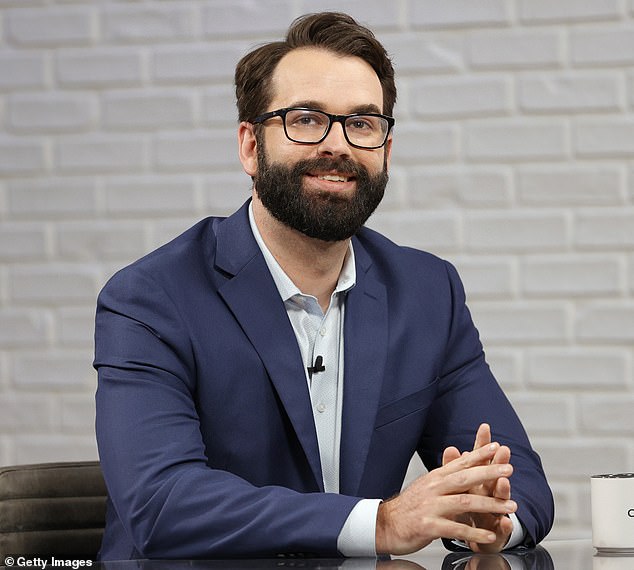 Johnny the Walrus was written by conservative political commentator Matt Walsh (pictured in August 2021). The book was published last monthly and quickly became one of Amazon’s Best Sellers in LGBTQ+ Books, before being removed from that categorization

She then cites a tweet from Matt Walsh where he claims has ‘the number one anti-LGBT book in country’ and criticizing him or his book would be ‘homophobic’.

‘You are a selling a manual of how to teach kids to bully other kids to commit suicide,’ the woman accused. ‘It is teaching kids to kill, well to bully transgenders, into committing suicide.

The customer also accused Walsh of bragging that he is ‘glad’ his book is ‘going to make the LGBTQIA kids, especially transgenders, commit suicide.’

‘If you’re transgender, if you’re gender non-binary — and this is super triggering, I would understand if you needed to leave. This is education for people who don’t get it, who don’t understand,’ the meeting host said after sharing the complaint.

‘I would understand if this was a lot, but equally I want folks to know that we’re doing this because this really matters, to get this education out there.’

He then warned staff to ‘brace yourself’ as they were going to show a 30-second clip of Walsh reading the book.

Footage of the book reading and the staff’s post-reading reaction was not immediately available for DailyMail.com’s review.

Amazon leadership held a session for employees dealing with the “trauma” of Matt Walsh’s book becoming a best seller and dealing with his trolling. They strategize on how to demote it on their site and claim he will get people killed. @MattWalshBlog broke them. pic.twitter.com/AKH8ihO0iV

More from the Amazon therapy session for trauma from Matt Walsh’s books: They accuse Matt of hate speech and the host literally breaks down in tears. Attendees are warned “brace yourself” before a clip of Matt reading his book is played. We are living in different realities. pic.twitter.com/naxlcG7RvD

Walsh, who saw the clip, responded to the criticisms during an interview with Tucker Carlson on Tuesday.

‘I think their behavior to me is marginalizing me and invalidating my lived experience as children’s author, but also the book is about true self acceptance,’ Walsh told the Fox News host.

‘It’s about a boy who identifies as a walrus and his mother goes along with it. But they both learn at the end that you should accept yourself for who you truly are, who you biologically are.

‘A message of self-acceptance, when I was a kid that was the most common message in books that we read. It is just now on the left, with a force on kids is actually rejecting who you really are in favor of a delusion.’

Ahead of the interview, he took to social media seemingly mocking Amazon’s meeting in a series of sarcastic tweets.

‘Amazon employees are traumatized by my children’s book, meanwhile one of the top selling children’s books on the site right now is from the American Academy of Pediatrics and it pushes puberty blockers and sterilization on nine year olds. But my book is the problem,’ he tweeted.

He also denounced the customer’s allegation that his book ‘explicitly encourages kids to bully and kill trans people,’ which he claims is ‘not even remotely close to the vicinity of the truth.’

‘I don’t even mention trans people in the book,’ Walsh stated.

He also noted that even though his book had ‘traumatized Amazon’s employees,’ Americans still continued to purchase it.

‘You all chose to buy it and now it’s number three overall. You should be ashamed!’ he mocked. 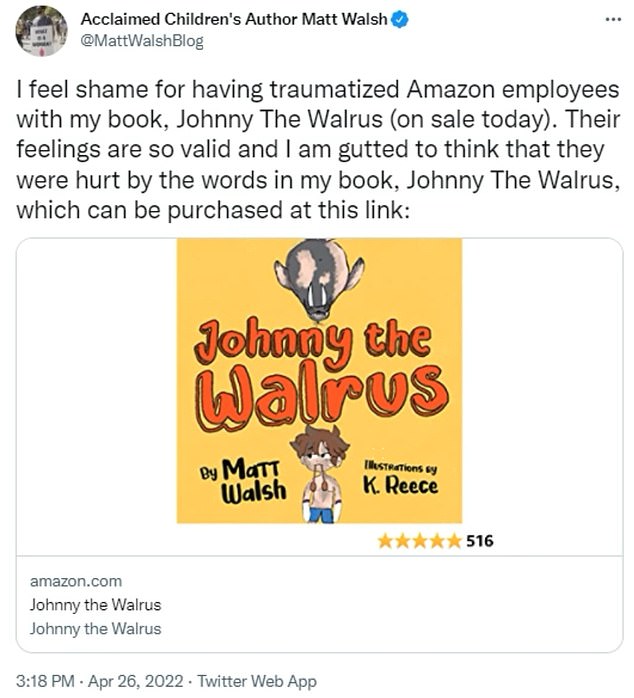 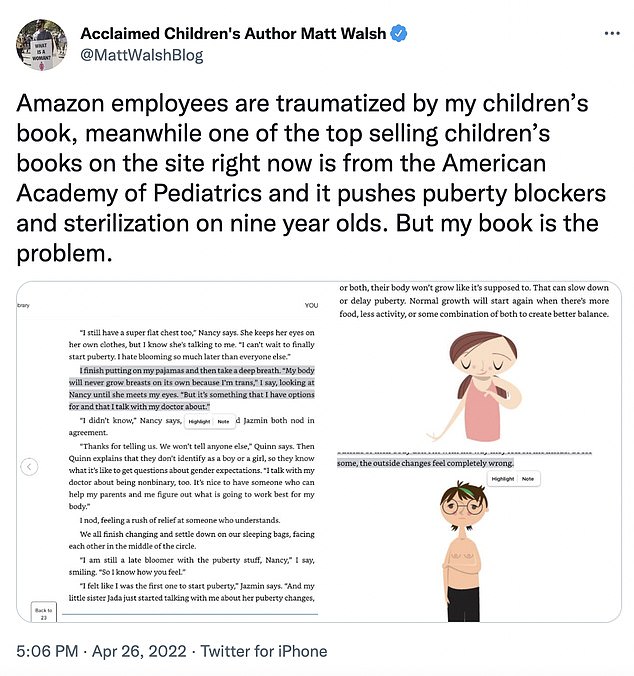 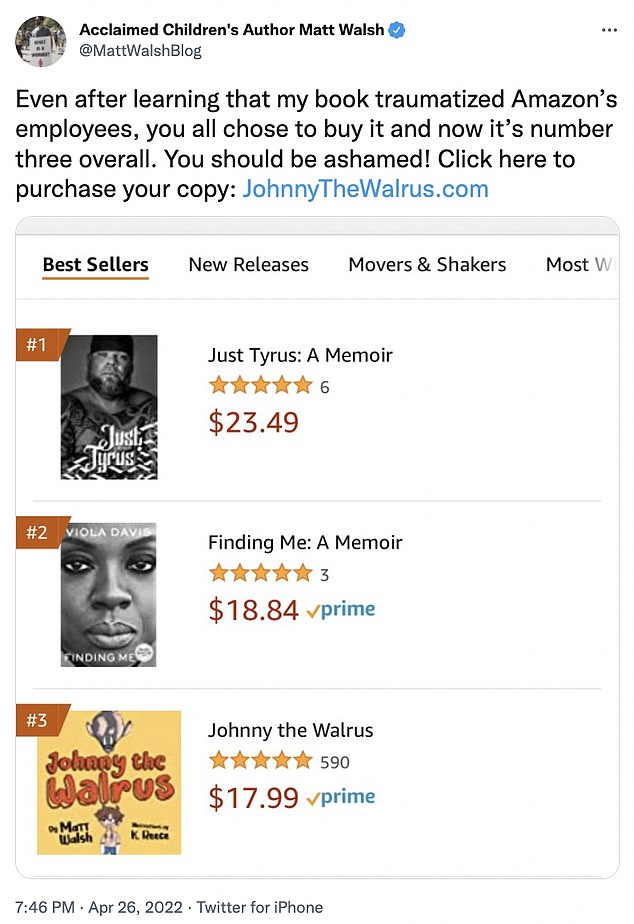 Amazon describes Johnny the Walrus as ‘timely tale of innocence, identity, and imagination’ in its online listing for the book.

‘Johnny is a little boy with a big imagination. One day he pretends to be a big scary dinosaur, the next day he’s a knight in shining armor or a playful puppy,’ the book description reads.

‘But when the internet people find out Johnny likes to make-believe, he’s forced to make a decision between the little boy he is and the things he pretends to be — and he’s not allowed to change his mind.’

The book, which has a publication date of Tuesday, appears to have been listed on Amazon in December 2021.

Walsh, tweeting at the time, said the children’s book was ranked number 1 on Amazon’s list of ‘Best Sellers in LGBTQ+ Books’ before being removed by the platform.

‘Amazon has removed my bestselling LGBT children’s book from their LGBT book list,’ he tweeted last year.  ‘This is an unconscionable attack on gay rights and a horrific example of homophobia and gay erasure.’

The author also revealed the book was removed entirely from Target’s website.

‘The canceling begins. Target has removed Johnny the Walrus from their website. No explanation has been given,’ Walsh tweeted in December. ‘I am beginning to feel deeply marginalized and unsafe as an LGBT author and thought leader.’

He added: ‘Jussie Smollett is not the victim of an anti-gay hate crime but I am.’