If you want to make a documentary about a museum, MASS MoCA, the contemporary arts center in North Adams, Mass., is a pretty good bet in terms of subject matter.

The museum occupies a labyrinthine old mill complex that supplied fabrics to the Union Army during the Civil War and was transformed into an electronics plant in the 20th century. When the Sprague Electric Co. abandoned the town in the 1980s, Thomas Krens, then the director of the nearby Williams College Museum of Art, with his colleague Joseph Thompson, plotted to transform the behemoth 26-building site into a contemporary arts center called MASS MoCA.

It would take a full decade and a half to make that dream become a reality, which involved convincing the residents of an industrial town that a museum would be a good economic bet, undertaking a mountain of renovations on the leaky complex, and regularly prodding state officials to supply desperately needed funds. MASS MoCA, through a combination of carnival barker ambition and dogged persistence, became a reality in 1999.

Artist Laurie Anderson prepares for a performance at MASS MoCA, as seen in “Museum Town.”

“Museum Town,” the new documentary on the museum directed by Jennifer Trainer and narrated by Meryl Streep, certainly has plenty of narrative threads it can draw from: the tensions between the working class town and the art world jet set that parachutes into its midst; the industrial level of effort it takes to program 200,000 square feet of gallery space; the museum’s curatorial triumphs (an early David Byrne installation that somehow convinces Massachusetts’ then-Gov. William Weld to maintain funding for the project) and its disasters (the infamous showdown over a wildly expensive, never-completed work by Swiss artist Christoph Büchel that ended in lawsuits and acrimony).

Trainer touches on these story lines — and others — but sticks to their surface or, in some cases, drops them altogether.

Partway through “Museum Town,” we learn that Krens, the guy who helped brainstorm the idea of MASS MoCA, abandoned the budding project for a gig at the Guggenheim Foundation, where he would put into place a range of expansionist plans that resulted in the opening of a Frank Gehry-designed Guggenheim in Bilbao. Unexplored in the doc is his departure (was no one irritated by this?) or the effect of the museum arms race toward more and bigger spaces — of which MASS MoCA is a part. (Sidebar: Michael Govan, the current director of the Los Angeles County Museum of Art, was part of the original team.)

To its credit, the documentary is frank about the museum’s prickly relationship with the blue collar town it inhabits. But it treads lightly. Repeatedly, residents say in “Museum Town” that they never visit the museum. Yet none of the museum’s leadership is asked to reflect on camera about why that is.

That’s left to a passing interview with an art installer, who says, “They are probably afraid of their hometown turning into a bougie, rich people’s summer home or something like that.” 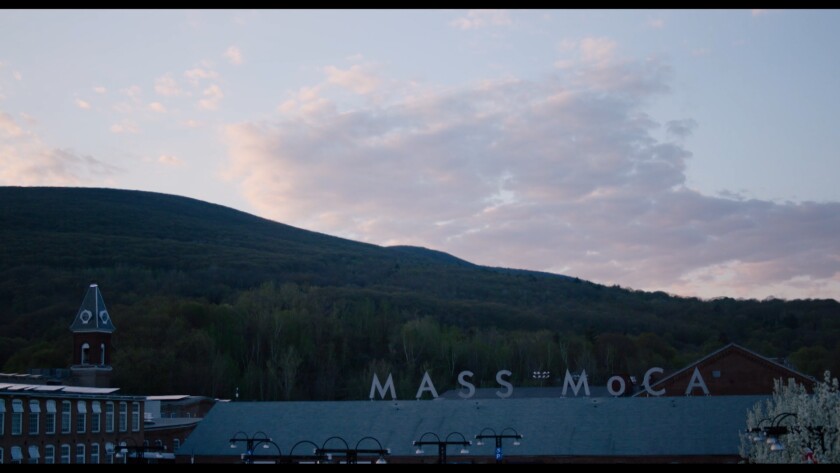 MASS MoCA, seen here in a still from “Museum Town,” transformed an abandoned factory complex in northeastern Massachusetts into a contemporary arts center.

The Büchel controversy could be its own documentary, since it wasn’t just a bonfire of the vanities — it was a dumpster fire of the vanities: the story of an ambitious curator intent on realizing a tempestuous European art star’s vision of societal decay inside the warehouse-sized Building 5. The installation, titled “Training Ground for Democracy,” included mountains of detritus that featured a reconstructed two-story house and a portion of an old movie theater. Budgets ballooned and hostile emails flew. The museum sued for the right to show the incomplete work — a suit it ultimately won — but which damaged its reputation for attempting to show an artist’s work against his will.

In the documentary, the curator at the heart of the controversy — Nato Thompson — is neither interviewed nor mentioned. Nor does the film address how MASS MoCA picked up the pieces in the wake of that showdown.

The lack of willingness to go deep on some of these issues may come from the director’s personal connection to the story: Trainer was MASS MoCA’s founding director of development. Which means that in many ways she’s essentially telling a story about her friends — and often, with friends, it’s easier to avoid uncomfortable questions. 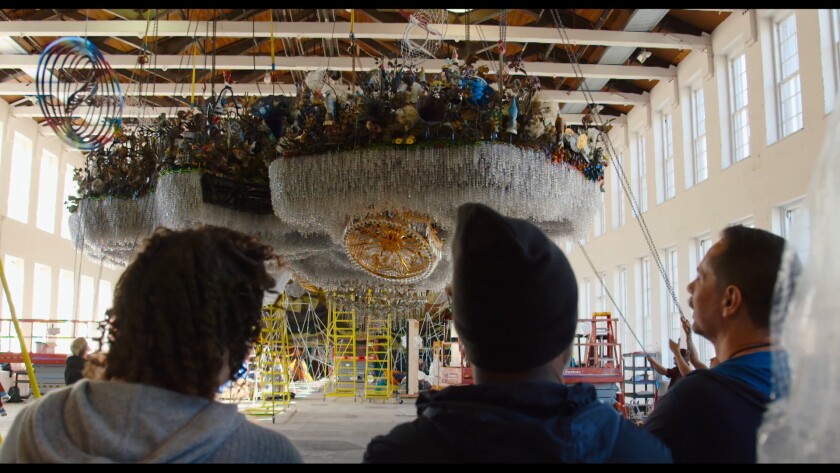 Visual artist Nick Cave (in black hat) is seen with the fabrication team at MASS MoCA, installing his work “Until.”

This doesn’t mean that “Museum Town” doesn’t have its compelling moments. We watch artist Nick Cave realize a complex installation in Building 5. We see Laurie Anderson in the process of staging a performance. We follow the story of the charming Ruth Yarter, a longtime North Adams resident (and former Sprague employee) who was skeptical of the idea of MASS MoCA but goes on to become a longtime volunteer.

She is seen assessing an Anselm Kiefer installation in a gallery. “Is that part of something or is that it?” she asks.

The same could be said of “Museum Town.” The film is a congenial 101 on MASS MoCA. Too bad it doesn’t go deeper than that.