COVID-19 is crushing Native American reservations. But distrust of the government makes vaccines a hard sell

Milton “Quiltman” Sahme has watched in distress as the coronavirus rips through the Warm Springs Reservation, home to about 3,800 people in central Oregon.

In recent days, it killed a neighbor, another woman he knew and his friend Don Sohappy, an elder treasured as a rare teacher of the native language Ichishkiin.

The death count as of Saturday stood at 14.

But when the federal Indian Health Service starts vaccinating tribe members, Sahme has no plans to get in line.

“I don’t have much trust in this government with how they’ve treated my people,” he said. “They’re constantly telling you one thing and doing another.”

Native American leaders say such skepticism about the newly authorized coronavirus vaccines pervades their communities even as the death toll mounts. Among the areas hardest hit by the pandemic, reservations may also be among the places most resistant to the clearest way out.

“There is going to be pushback to this vaccine,” said Jonathan Nez, president of the country’s largest reservation, the Navajo Nation, which has lost more than 700 residents to the virus.

Douglas Yankton Sr., chairman of the Spirit Lake Reservation in North Dakota, where more than 20 people have died, said that many essential workers have already indicated that they believe the vaccines are riskier than the virus.

He was leaning against vaccination himself, even after the virus killed his uncle and three cousins in one November week.

The survey was conducted in late October and early November — before clinical trial results were made public showing two vaccines to be highly effective.

Nationally, the coronavirus infection rate is more than three times higher for Native Americans than for white people, according to the U.S. Centers for Disease Control and Prevention.

The toll of the virus on reservations has been exacerbated by widespread poverty. Many people lack adequate running water, electricity, medical care and housing.

The vaccine rollout offers the greatest hope for relief.

“We have been hit by these pandemics in the past and they almost wiped us out, like smallpox,” said Dr. Mary Owen, president of the Assn. of American Indian Physicians and a member of the Tlingit Tribe in Alaska. “We can’t afford not to partake in these vaccines.”

But distrust of the federal government — especially on issues related to health and medicine — dates back to colonization. 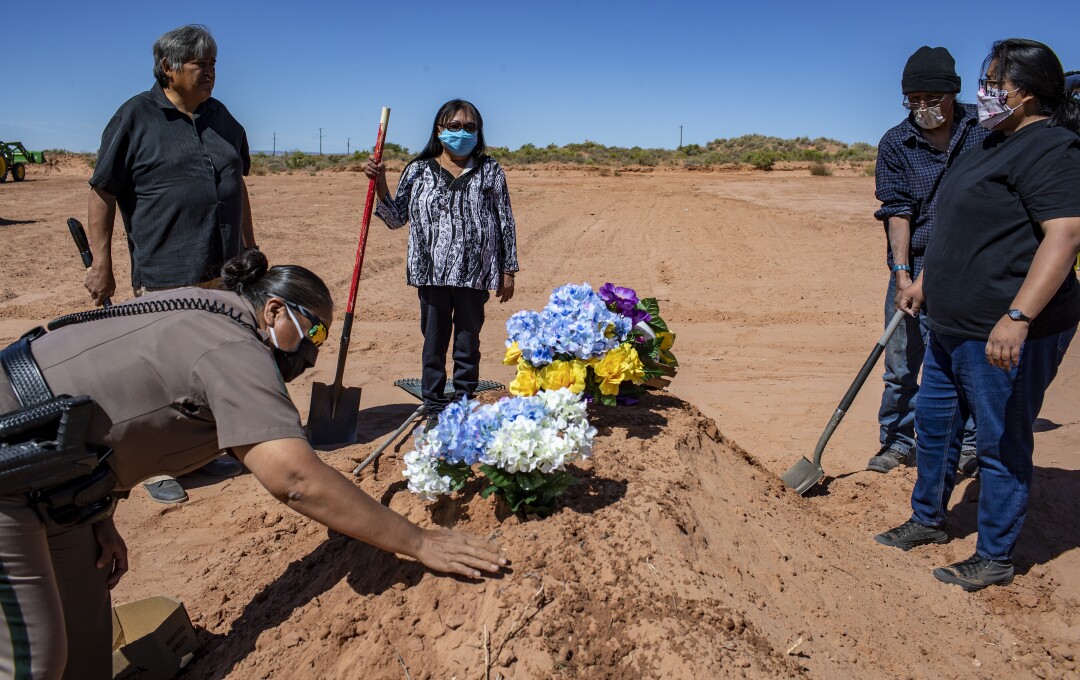 In six years during the 1970s, doctors sterilized as many as 42% of Native American women of childbearing age, often under duress, sometimes without them knowing, according to Brianna Theobald, a University of Rochester history professor.

“People view these sterilizations as a continuum of a long history of various forms of coercion as well as neglect,” she said.

In another oft-cited case, researchers from Arizona State University drew blood from members of the Havasupai Tribe in the 1990s to investigate the high rate of diabetes, but then shared the samples without consent with researchers on other projects.

Confidence in the financially strapped Indian Health Service — which serves 2.2 million people — was further eroded during the pandemic when it ran short of personal protective equipment and coronavirus test kits.

Few Native Americans participated in clinical trials for coronavirus vaccines. The Lummi Nation in Washington state pulled out of an AstraZeneca trial, citing poor communication with the drug company.

Vaccine skepticism is also appears to be high among other minorities. A poll conducted in September by the Associated Press-NORC Center for Public Affairs Research found that 24% of Black Americans and 34% of Latinos plan to get vaccinated, compared to 53% of white people. There were too few Native Americans in the survey to produce a reliable estimate for them.

Worried that reservations will reject vaccination, federal officials have been making their case to the tribes.

“As soon as a vaccine becomes available to you and the tribal nations, you should very seriously consider getting vaccinated,” he said during a live-streamed video the next day aimed at Native Americans. “It is an extraordinarily effective form of prevention.”

Some tribe officials have embraced the vaccine campaign. Leaders of the Hopi reservation in Arizona launched a blitz of leaflets, newspaper advertisements and radio announcements in the tribal language.

One of his advisors, Duane Humeyestewa, said in an interview that “ many residents of our villages are accustomed to the traditional way of life, so trying to communicate data and science is a huge task and an arduous process.”

Federal officials are aiming to vaccinate at least 70% of the U.S. population in hopes of wiping out the virus by achieving herd immunity.

Abigail Echo-Hawk, director of the Urban Indian Health Institute in Seattle, said that if their doubts were adequately addressed, Native Americans might be more willing than many other citizens to join that effort for the collective good.

“People in the majority population make individually based choices, while our community makes community-based choices,” she said.

That was evident in the many reservations that have instituted harsher pandemic regulations than surrounding jurisdictions.

In South Dakota, the Cheyenne River Reservation mandated masks and set up border checkpoints to block everybody except residents, essential workers and commercial vehicles. The state’s Republican governor, Kristi Noem, has resisted calls to require masks and tried to get the checkpoints removed.

In the meantime, vaccinations have already started on some reservations. The Navajo Nation began last week with staff from intensive care units. The Indian Health Service reported it was going smoothly, with 3,200 people receiving shots by Saturday.

Nez, the tribe’s president, said he planned to get vaccinated to set an example for the 175,000 people on the reservation, which stretches between Arizona and New Mexico and into Utah.

“It’s about getting a message out,” he said. “Education is vital.”

Alastair Bitsóí, a public health advocate on the reservation, said he is working with one of the hospitals to craft pro-vaccine messaging in English and Diné, the Navajo language.

“So many of our elders speak only Diné,” he said. “Having them understand and take the vaccine will help get people to take it seriously and get vaccinated.”

The first batch of vaccine was due to arrive at the Warm Springs reservation this week. Health workers and people over 65 will be given priority.

Sahme said he planned to watch what happened once members of the community were vaccinated. He doesn’t entirely rule out getting the vaccine.

Read reported from Seattle and Lee from Los Angeles.