Consumers wrestle with shortages, sticker shock in the grocery aisle

Pepsi trolls with its ‘Cocoa’ Cola

As it draws closer to the winter solstice, a few things are in abundance: chilly weather, festive moods (well, as festive as one can be in 2020) and shade.

PepsiCo announced a new launch this week that combines the feelings of all of those: Pepsi’s “Cocoa” Cola. The new flavor of the soda and snack giant’s namesake beverage was whipped up as a small batch in the company’s test kitchen. According to a statement from PepsiCo, it tastes like a blend of the classic soft drink, hot cocoa and a hint of marshmallow. And its name may get a laugh — or a rise  — from soda fans who have taken sides in the cola wars.

“There is nothing more classic than hot cocoa on a winter day, but this year has been anything but typical,” Todd Kaplan, vice president of marketing at Pepsi, said in an emailed statement. “So why not bring together the delicious taste of a Pepsi with the delicious, wintery taste of chocolate and marshmallow and bring some unexpected joy to our fans this season? We are confident we nailed Pepsi ‘Cocoa’ Cola and can’t wait to get this in the hands of cola fans this winter.”

The unconventional soda flavor was announced on Twitter with a contest on Thursday morning. The soda giant promised the new mix would go into production and be in stores later this winter if the announcement received 2,021 retweets. PepsiCo promised to make the flavor early Thursday afternoon. By Friday morning, the announcement had been retweeted more than 3,600 times.

This is the second unusual flavor Pepsi has announced in the last few weeks. Right before Thanksgiving, the soda company announced Pepsi Apple Pie, flavored like the classic dessert. Last year, the company sold a nonalcoholic sparkling rose-flavored cola. And in Japan, unconventional Pepsi flavors ranging from yogurt-tasting Pepsi White to bright pink Sakura are the norm.

Though the post got many retweets from fans excited to try cocoa-flavored Pepsi, it’s unclear how popular the actual beverage will be. But even though cocoa is a universally popular flavor in winter, PepsiCo may have tried to make this beverage solely for the name. After all, there’s no better way to troll Coca-Cola, its biggest soft drink rival, than making a Pepsi drink that literally has almost the same name.

Few items go together better than beer and pretzels. Now you can consume them at the same time with Pabst Blue Ribbon Mini Pretzel Wrapped Beer Brats.

The snack, which looks like the party snack pigs in a blanket, contains miniature hardwood-smoked bratwurst cooked in the iconic beer that are then wrapped in pretzel bread. The product retails for $9 to $10 per 20-ounce pack.

“Our partnership with Pabst Brewing gave us the opportunity to capitalize on our wrapped-protein expertise to create a truly unique snacking and entertaining product using Pabst Blue Ribbon Beer to create a fun twist on the classic Pigs-in-a-Blanket appetizer,” Josh Harris, president and founder of Distinctive Foods, said in a statement.

While Pabst Blue Ribbon has been known for beer since it was established in 1844 in Milwaukee, the company has shown a recent willingness to go beyond its storied roots. The pretzels are the latest example.

The new innovations should help keep PBR relevant with today’s consumers. After peaking in the 1970s, the lager saw its popularity decline, with sales dipping below a million barrels in 2001. Since then, the brand has seen a resurgence. Brewbound, citing data from market research firm IRI, said through early October of last year, PBR ranked as the eighth-largest beer company. 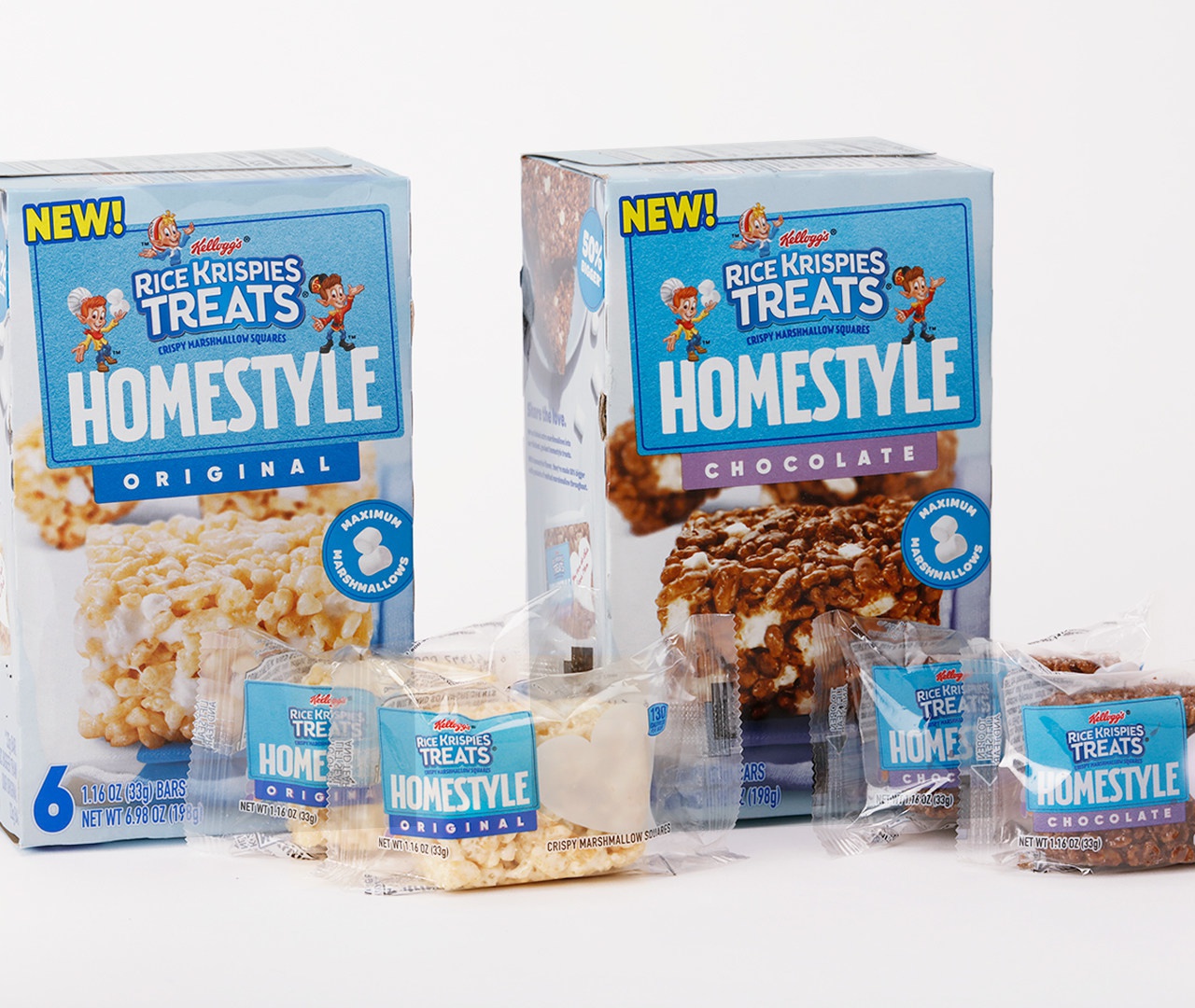 Retrieved from Kellogg Company on December 16, 2020

A homestyle snap, crackle and pop

The classic Rice Krispies Treats are getting a homey makeover.

Kellogg is launching a new recipe with more marshmallows and making them 50% larger than the original. The company said the new Rice Krispies Treats Homestyle were inspired by homemade versions of the treat and are “just like Grandma would make them.”

“For anyone gathering virtually, we wanted to give our fans a treat to enjoy the recognizable homemade taste that hearkens the emotions time together creates,” Sarah Reinecke, director of brand marketing for Kellogg’s Portable Wholesome Snacks, said in a statement.

At a time when everyone is at home during the pandemic, it makes sense that Kellogg would turn to a recipe that consumers were already making in their own kitchens. The new snack could bring out a feeling of nostalgia, which has been known to get consumers to open their wallets.

The company is giving some consumers a first taste with a social media campaign, and then Rice Krispies Treats Homestyle will be available in grocery stores nationwide in January.

The new marshmallow snacks, which will come in original and chocolate flavors, are individually wrapped with a writable wrapper that allows consumers to leave a handwritten note. The brand has previously innovated with similar wrapping before. In 2018, it partnered with the National Federation of the Blind to create Braille stickers and re-recordable audio boxes to help parents send messages to children who are blind or have impaired vision.