Have You Tried Coca-Cola Starlight Yet? We Tasted Coke’s New Space Drink. What to Know 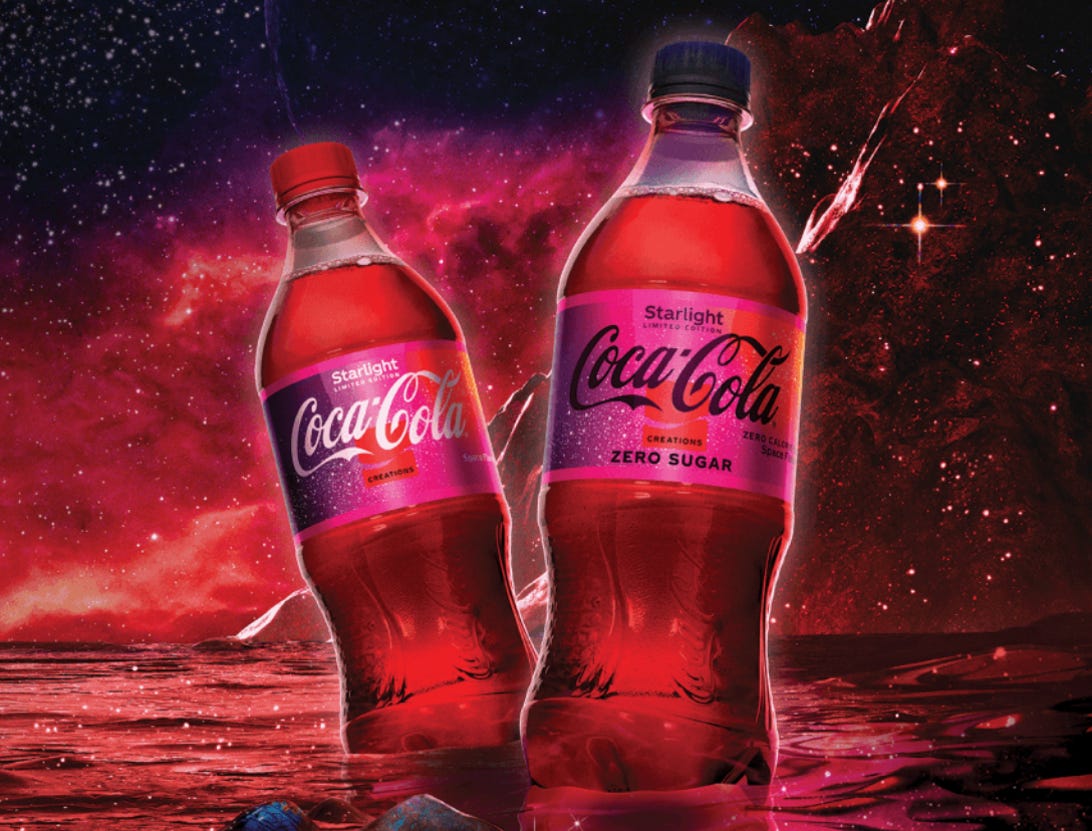 Coca-Cola’s newest Starlight (and Starlight Zero Sugar) drink is still available if you haven’t tried it. I tasted the “space-flavored” beverage and it was different from any Coke I’ve ever had. Unlike most Coke and Coke-related drinks, this one has a red hue, not brown, and a somewhat translucent look.

The Starlight Coke is a limited-edition sparkling beverage. Coca-Cola says you’ll get a “subtle cooling sensation” when you drink it. It’s also nostalgic — in 1985, Coca-Cola was one of the first soft drinks to be consumed in outer space by astronauts using a space can.

I’ll tell you more below about Coke’s new Starlight drink, including all the different flavors you might encounter and how long it’ll be around.

Coca-Cola says this new Coke flavor is inspired by space. The company also says to try it ice cold to “feel like you’re among the stars,” so I let it sit in the freezer for an hour before sipping.

Upon opening the bottle, it didn’t fizz as much as a regular Coke does, which I liked. Too much carbonation will give me hiccups. The smell was a pleasant mixture of ginger and, much to my surprise, lemon furniture cleaning products, which wasn’t unpleasant. When I took a sip of the Starlight Coke, it immediately reminded me of ginger ale. Thankfully it didn’t taste like the products I use to give my furniture a shine, but it’s not something I’d buy again.

However, not all taste buds experience the same flavors, so I asked around to see if anyone had the same taste experience. Here’s what my CNET colleagues said it tastes like:

Yes. You should be able to find Coca-Cola’s Starlight flavor at many grocery stores and gas stations. Living in a somewhat small town, I had to search through three stores before I found them.

However, if you’re interested in trying the Starlight Zero flavor, it may be harder to find. I recommend doing a quick search to see which stores carry it in your neighborhood.

How long will the limited-edition Coke be around?

You’ll be able to buy Starlight Coke for six months only, so after August you may not be able to find them. If it’s your favorite Coke flavor yet, you might want to consider stocking up, because it’s unclear if Coca-Cola will ever bring the flavor back.

What’s the difference between Starlight and Starlight Zero Sugar?

Why did Coca-Cola come out with a new flavor?

Coca-Cola is trying its new flavor Starlight to promote its most popular beverage, Coke. Starlight is the first of Coca-Cola Creations, its newest hub platform. The giant soft drink company has also partnered with pop singer Ava Max to promote the launch.

Its new marketing strategy is designed to reach the Gen Z age group through “packaging designs, culturally relevant expressions and creative collaborations,” the company said in a press release.

Coca-Cola will continue to release a series of unexpected beverages, though it hasn’t said what those flavors might be yet.

Want to know what Coca-Cola’s competitors are doing? Pepsi unveiled Nitro Pepsi, a nitrogen-infused cola, around the same time. It’ll be available March 28.

Get the CNET How To newsletter