‘Doctor Strange 2’ Illuminati, Explained: Who Are These Elite Marvel Heroes?

Bob Barnes, who has been cycling to all 50 state capitals in the span of a year, said he reached a “pivotal” place in his cross-country trip when he arrived in Florida.

While Barnes, 52, of Syracuse, New York, was only in Florida for a few days, his brief visit to the state marked the end of his second “switchback” of the United States and the beginning of his final leg of the journey.

But he still has plenty of land to cover.

“I want to show people that, no matter what, you can do anything you want.”

Barnes arrived in the state of Florida on March 15. He visited Tallahassee, his 31st capital, and was on his way again by March 17.

He’s more than 60% done with his American adventure and shared with Fox News Digital his journey through the Sunshine State — noting that he’s also shed some pounds along the way.

‘Weather’s turning, terrain is getting better’

Barnes said that after completing his second of three “switchbacks” across the U.S., he felt “great.”

“I’m really happy,” he said. “The weather’s turning. The terrain is getting better, but we’ve still got some mountains to go over.”

Bob Barnes has been cycling to all 50 U.S. state capitals in one year and sharing his journey with readers of Fox News Digital. On March 16, he arrived at his 31st capital: Tallahassee, Florida
(Bob Barnes)

“The other thing is, I’ve actually pedaled across the Northern United States before, so I should have a feel for it,” Barnes added. “We’re going to be a little bit more south than we did before, but I can feel the end of the trip.”

Completing his second switchback isn’t the only milestone for Barnes. He said he’s also looking forward to reaching 10,000 miles on his trip — something he had “no idea” would fall so close to his arrival in Florida.

“Honestly, I feel a little sad, because the trip’s going to be over one day.”

“Just like Mardi Gras, I couldn’t have planned that day any better,” Barnes said. “Everything’s hit or miss, so I’m very surprised … It is a pivotal point in the trip.”

“I can see the finish line in my head,” he added. 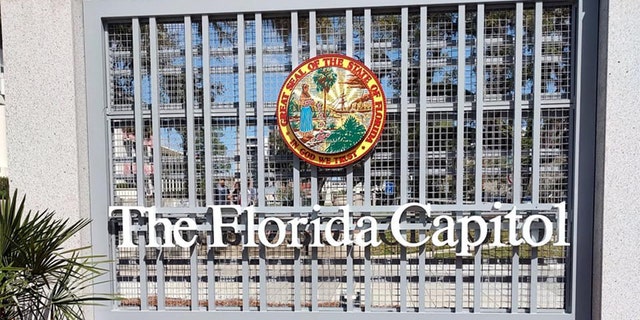 Although he said it’s “exciting to reach these goals,” he’s also going to miss the journey.

“Honestly, I feel a little sad, because the trip’s going to be over one day,” Barnes said. “And I’m going to miss the trip.”

MAN BIKING ACROSS US REVEALS FAVORITE STATE SO FAR

“I just love being out here,” he added. “Every day is a new day. It’s incredible.”

‘We got along well’

“He said I made a personal impact on him, more than I know.”

“It just worked out,” Barnes said. “He was a really nice guy and we got along well.”

Delbert, a veteran, is also a cyclist and “a good dude,” Barnes said. 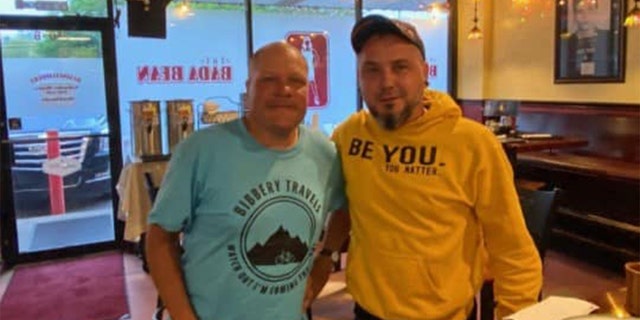 During his visit to Florida, Barnes was able to meet “a friend of a friend of a friend,” a man named Delbert (shown above, at right) who bought him dinner and let him stay in a house he owned that happened to be empty at the time.
(Bob Barnes)

“One thing that he told me that I really appreciated — he was like, ‘You don’t even know how much of an impact you have on some people,’” Barnes recalled. “He said I made a personal impact on him, more than I know.”

“I know I’ll look back and realize it more, but that’s the whole idea. I want to show people that, no matter what, you can do anything you want,” Barnes said. 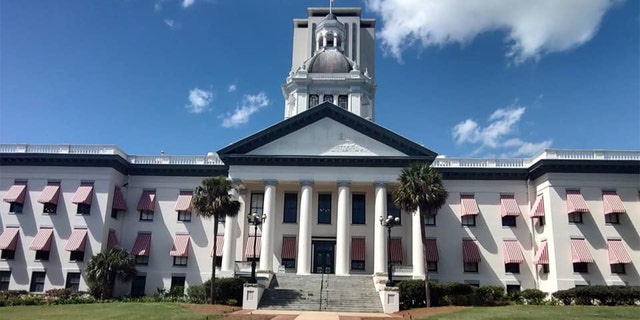 Barnes has also noticed a personal change. He said he’s lost 30 pounds since he started his journey in August 2021.

“All you have to do is pedal 8 hours a day, and you will lose weight,” Barnes joked. “It’s pretty simple.”

Barnes had told Fox News Digital earlier that throughout his journey, his diet mostly consisted of peanut butter sandwiches and fast food. He’s also had some Facebook followers make him food and take him out to dinner along the way. He said he hasn’t done anything specific to lose weight other than spend most of each day on his bicycle.

Barnes’ goal is to visit each state capital and move on, so he didn’t explore much of Florida aside from parts of the Panhandle for a couple of days on his way to Tallahassee and back to Georgia. 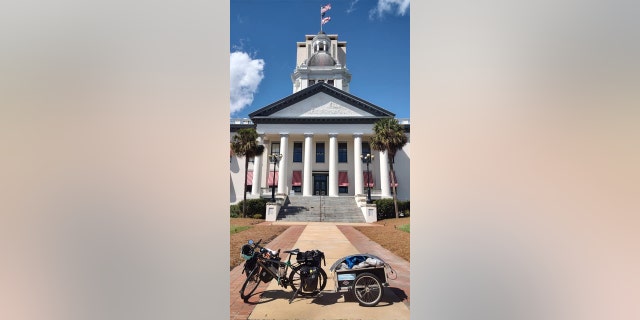 Barnes said that in terms of a choice between the old and the new capitol buildings in Tallahassee, he preferred the old capitol (pictured here).
(Bob Barnes)

In Tallahassee, Barnes favored the old capitol building over the new.

“It’s this big, huge, old museum, which is cool,” Barnes said. “[It’s] just got a better feel to it and it’s got the [creaky] floors, and it’s just full of history.”

“The new one’s all business,” he added.

“I’m not going to push it and put myself in danger just to put a few more miles in.”

As always, Barnes had his celebratory beer after reaching Tallahassee and soon went to meet Delbert for dinner.

“I’m a little disappointed in myself because I got to the capitol and I had all these big expectations of exploring the colleges and things like that,” Barnes said. “I didn’t do a thing. I was tired and just relaxed.” 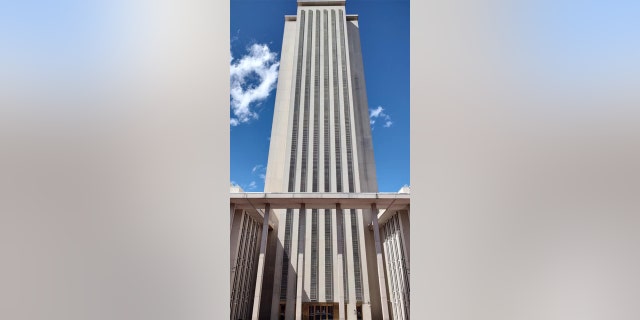 The areas of Florida that Barnes rode through were “warm for the most part,” aside from a day of wet weather.

“Tuesday was unpleasant,” he said, adding how the rest of the week improved. “It was just cold and rain … It was a soaker.”

As far as the road conditions, Barnes didn’t have much trouble in “a very bicycle-friendly city.” 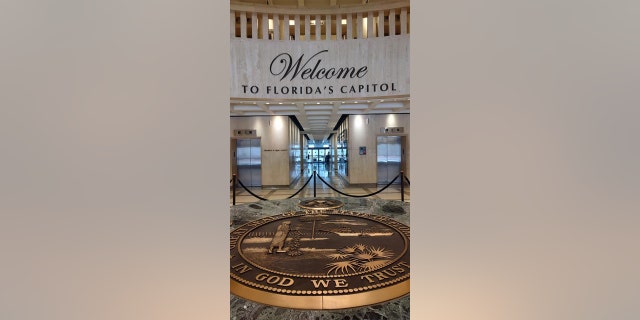 The inside Florida’s capitol building is pictured here. Barnes took all of the images that appear in this article.
(Bob Barnes)

“You can basically get around anywhere you want in Tallahassee on a bicycle,” he added.

Barnes said he hopes to be in Juneau, Alaska, by the end of July, so he can complete the journey within one year. He began his mega-trip on August 1, 2021.

“I need to make up some miles and I think I can, but … I try to be realistic,” he said. “I’m not going to push it and put myself in danger just to put a few more miles in.”

Looking back, Barnes said he “didn’t realize” his second switchback, across the middle of the U.S., was going to be so tough. 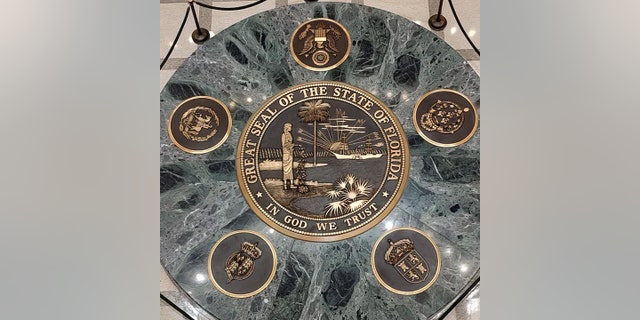 Florida’s state seal on the inside of the new capitol building is shown here.
(Bob Barnes)

“Looking forward to the third [leg of the trip], I have preconceived notions and I just hope those are the things that do happen,” Barnes added.

Barnes said he expects North Dakota and South Dakota to be flat — and also windy. He anticipates the Rocky Mountains won’t be “as hard to go over” as the middle of the country.

“And then the Midwest — I’ve actually pedaled through Columbus and Indianapolis and Michigan four years ago, so those are all things in my head that feel good,” Barnes said.

Until then, Barnes was looking to his 10,000th mile and reaching his 32nd capital, Atlanta, Georgia.

Barnes plans on taking a celebratory photo when he arrived at 10,000 miles.

Stay tuned to read more about this unique American journey by bicycle!