The costume design throughout “Small Axe,” a collection of five films directed by Steve McQueen that depicts British West Indian life during a certain time, is a mosaic of precision details. Ordinary garments, to the untrained eye are, indeed, brilliant artifacts of West Indian expression. Watch the episodes with the wardrobe in mind, and you’ll notice vibrant, bespoke personal style hiding in the seams. An A-line dress becomes more than a dress after we learn that a young woman made it by hand; a polyester robe decorated with a pattern like stained glass becomes a mantle when a don wears it. “What is key is that everyone is about a certain style and way of doing things,” McQueen said. “If you look through all of the episodes, it’s not just in the clothes; it’s all a style. It’s not just what you do, it’s the way that you do it.”

TV shows we love to rewatch

For British West Indians in the ’60s, ’70s and ’80s, fashion was a nonviolent insurrection. In “Small Axe,” McQueen captures young people of Caribbean heritage pushing back against the established and bigoted norms of conservative English society. It’s apparent in how Black people walk, talk and how they dress. They determine style according to a code; most obvious are the flecks of ites, gold and green throughout the series.

“The style in ‘Small Axe’ is a small axe itself,” McQueen said, summoning the African proverb, popularized by Bob Marley and the Wailers in 1973. Jacqueline Durran, who won Oscars for her work on “Anna Karenina” and “Little Women,” worked as costume designer on two of the films: “Lovers Rock” and “Alex Wheatle.” “I wanted to bring as much specific detail to it as I could,” Durran said, “instead of being kind of generic.”

The second film, “Lovers Rock” — primarily set at a birthday party for a 17-year-old named Cynthia (Ellis George) — illustrates the originality exercised by the progeny of the Windrush generation, the 500,000 Caribbean people (including children) who immigrated to Great Britain between 1948 and 1970. Dressed in outfits they had planned well in advance, young women wear textured jewel-tone dresses, and their male counterparts dance in suits and fly button-downs. One character named Franklyn (Michael Ward) is clad in a navy shirt with a geometric pattern that looks reminiscent of a starry night in the Caribbean. Martha (Amarah-Jae St. Aubyn), another partygoer, wears a handmade, purple iridescent dress — one of the few pieces made custom for the film.

Youth street culture’s swagger is also on display in the fourth installment, “Alex Wheatle.” The movie follows the true story of the heralded British Jamaican young-adult novelist. Wheatle, who served as a consultant to the film, brought in pictures from his youth to help Durran design his style of the time. “We had a pretty specific and exact reference,” she said. “He was a great reference point for what we were all aiming for.”

The fashion of “Alex Wheatle” is both affecting and serves as comic relief. In one memorable scene, a young man named Dennis (Jonathan Jules) who befriends Alex (Sheyi Cole), takes him shopping — an effort to liberate him from dressing like a square and teach him “Brixton cool.”

“Are you coo-coo, or are you the beast? From where on this Earth did you land?” Dennis jokes.

“And they dress you there with garms made by di farm animals?”

Dennis, who wears a beret and a tailored pea coat, walks Alex around the streets of Brixton, eventually stopping to linger in front of a menswear store. Pointing out some drip in the window, Dennis tells Alex that “anything Farah is on target.”

McQueen said the menswear store they visited is a landmark. It was “a Black person shop,” he told me, despite the store not being Black owned. “And in the uprising, I think that shop did not get damaged because it was the Black man shop as far as dress is concerned.”

McQueen was born in London, in 1969, but his parents emigrated from Trinidad and Grenada. He grew up somewhat immersed in fashion, and he developed a proclivity for style. He sold vintage tweed suits with a friend at Ladbroke Grove. His sister, similar to Stephanie (Tamara Lawrance) in the final episode “Education,” was a textile student. She took the ferry to Calais, France, to “bunk in” to runway shows in Paris. McQueen relished in the style magazines that she would bring back. “I was like, ‘Wow, what is this?’ It was all about youth culture,” he said. “It was all about people making their own stuff. It was all about taking a polo and cutting the arms off.”

His mother at times used her sewing machine to tailor his outfits for parties, but she didn’t always understand her children’s style. “We weren’t waiting for Christian Dior; we weren’t waiting for Louis Vuitton. You just got that pattern, and you got that fabric. It was about inventing,” said McQueen. “It was great to experiment; we were finding ourselves within who we were with music and fashion.” 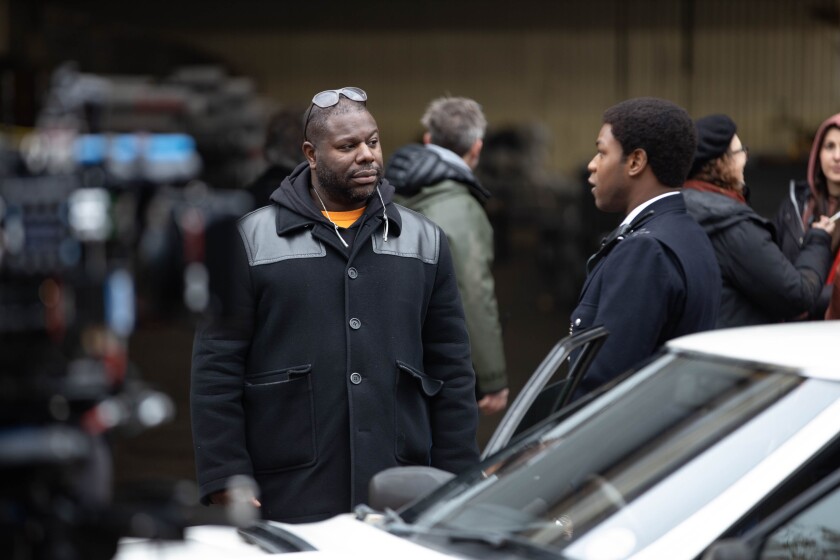 A young Alex Wheatle also finds himself in music. As he grows comfortable in his new home of Brixton, he spends all his money at record stores and becomes enraptured by the underground reggae music scene and sound system culture. He develops his own sound called “Crucial Rocker” and funds his speaker habit by selling weed.

Music is a key thread of “Small Axe” and a pillar of Caribbean culture. (Growing up, McQueen idolized a ska band called the Specials and the Fun Boy Three.) Lisa Duncan was the costume designer for the first film, “Mangrove.” The protagonist, Frank Crichlow (Shaun Parkes), is a Trinidadian who opens a Notting Hill restaurant in 1968 that quickly becomes a cornerstone for the West Indian diaspora. In one scene, a steel band plays in the middle of All Saints Road. Here, Caribbean fashion is less represented through the characters Frank, Altheia (Letitia Wright) and the rest of the Mangrove Nine who we see in utilitarian street clothes; whereas, the Grenadian Shortknee masqueraders and Jamaican pocomania folk dancers best represent the life and traditions they left behind.

That kind of specificity came from having a diverse costume team. In addition to Durran and Duncan, McQueen enlisted the designer Sinéad Kidao. All three are from the United Kingdom and were supported by the department — half of whom were of Caribbean descent.

That diversity shows up, particularly when it comes to the multifaceted style of the working class. Kidao was the costume designer for “Red, White and Blue,” the third film in the collection which highlights the British proclivity for conformity and the Caribbean disposition to resist injustice. Leroy Logan (John Boyega) derives meaning from the uniform he wears. As a research scientist, he often wears a T-shirt and corduroys beneath his lab coat while others wore suits. He later becomes a constable in an effort to fix London’s racist police culture from the inside. When Leroy is off duty, he dresses in street clothes typical of young British Jamaicans in the ’80s; in an early scene, Leroy rocks a gold T-shirt from the Second World Black and African Festival of Arts and Culture.

Kidao, who also designed the costumes for the final film in the anthology, “Education,” based loosely on McQueen’s upbringing, said that in Britain, a uniform is a “garment that was meant to ‘unify,’” but it ends up alienating its West Indian wearer. “A police uniform was quite a contentious garment among Black communities in the early 1980’s in the U.K., and the image of a Black man in a police uniform jarred with people in both Black and white communities,” said Kidao. “I think the uniform signified Leroy’s isolation.” 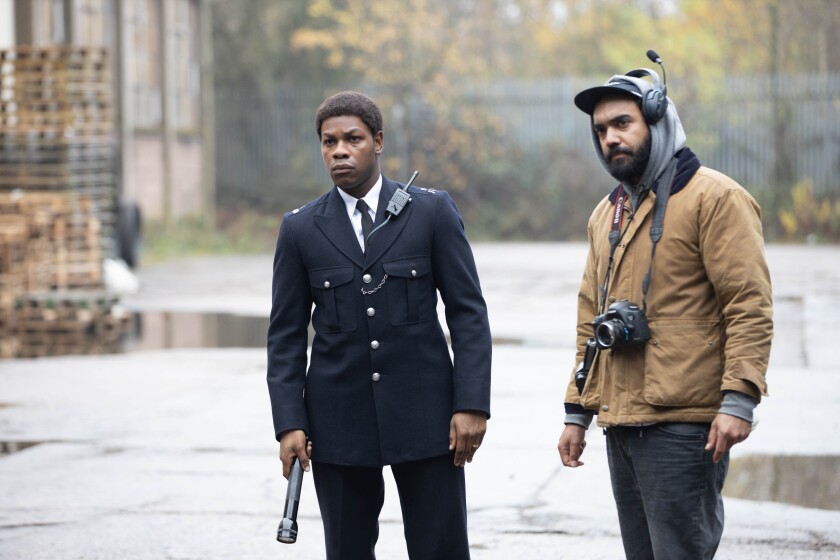 John Boyega as Leroy Logan, left, and director of photography Shabier Kirchner on the set of “Red, White and Blue.”

If Leroy’s uniform turns him cold with West Indians, in Britain, the style in “Lovers Rock” is indicative of the warm vibe of a Saturday night: thick smoke, heavy bass, sweaty walls and slow dancing. The hair is textured, and the makeup is applied to “show the beauty of Black skin,” JoJo Williams, the artist who worked on each of the films, said. The men’s shirts (somewhat inspired by what McQueen’s father wore) complement the women’s dresses in a way that felt intentional. “Everything had to be sort of amalgamated; you can switch partners and still match,” McQueen said. “The clashes and the contrasts and the things which complemented each other had to be all in one room. Nothing could stick out because otherwise it’ll look awkward or it would draw your eye. Everything had to be in sequence.”

As the intensity of the party crescendos, Parker B (Alexander James-Blake), the selector who plays disco, reggae and lovers rock, hangs a light bulb around his neck. McQueen had a name for that type of energy. “It’s Black; it’s called Black,” he said. “What happens in the situation when people do s— is called Black. People aren’t premeditating. They’re in it, and they do things … whatever it is, it’s Black.”

In each film, the costume design is a kaleidoscope for how the generations within the West Indian community interact with and represent themselves to one another. Each garment or accessory summons a feeling and symbolizes either conformity, rebellion or, perhaps, both. “The first time we see Alex Wheatle, he’s naked. He’s been taken of any identity, and he’s given an identity. The identity is conform; it’s his prison uniform,” McQueen said. “With ‘Lovers Rock’ it’s a different feel completely. It’s elaborate. It’s the people working 9 to 5 who live for the Saturday night. And, they live to be who they want to be, how they want to be. They live to be free in the moment. Lovers rock was these young people’s church. It’s freedom.”