Zappos CEO Tony Hsieh speaks onstage at the Life is Beautiful festival in Las Vegas in 2015. Those close to Hsieh remember his relentless hyping of his hometown as a business destination.

Feed your moths and hide your trousers: the expert guide to making clothes last for ever

Photo by FilmMagic/FilmMagic via Getty

Tony Hsieh, bestselling author and longtime former CEO of ecommerce pioneer Zappos.com, died at age 46 on Friday. His tragic loss — and unusual impact on the tech and startup landscapes for the better part of three decades — set off an outpouring of condolences and messages of gratitude from leading politicians, entrepreneurs and investors.

Through his book “Delivering Happiness,” various business ventures and influence at conferences and in his hometown of Las Vegas, Hsieh touched many lives. Here, Forbes spoke with several tech leaders who knew him well — Sequoia partner Alfred Lin, Neo CEO Ali Partovi, Long Journey Ventures partner Cyan Banister and Lowercase Capital founder Chris Sacca — to hear their standout memories of Hsieh’s life and legacy, in answers that have been lightly edited for clarity.

Born in Illinois to parents of Taiwanese descent, Hsieh spent his teen years in the Bay Area before attending Harvard University, where he graduated with a degree in computer science. While there, he befriended Alfred Lin, now a partner at venture capital firm Sequoia who joined Hsieh at his businesses LinkExchange, Venture Frogs and Zappos.com. 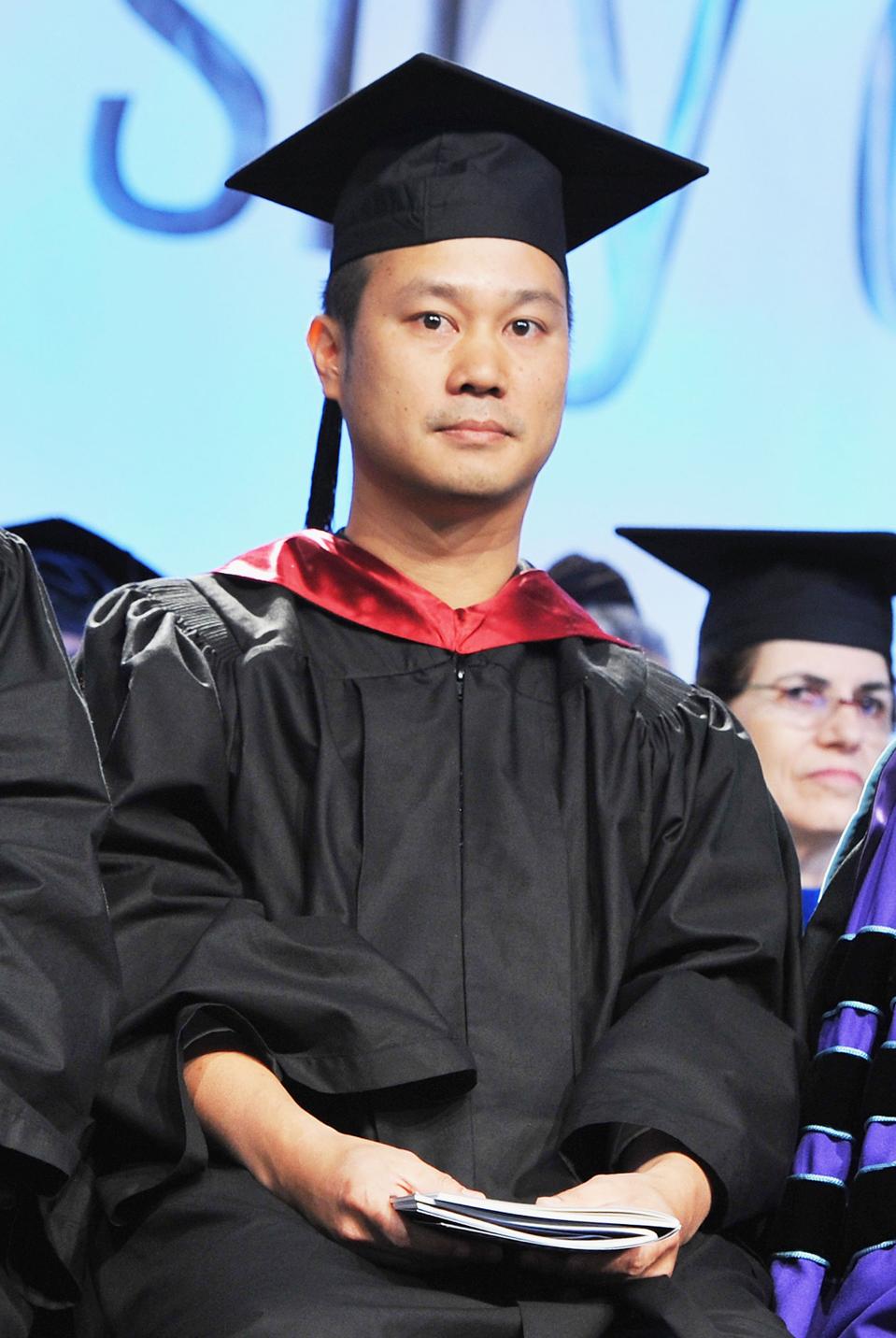 Seen here at the Fashion Institute of Technology 2011 commencement, Hsieh honed his business chops at Harvard in 1995.

Lin: In college, I was always impressed with his ability to do as little work as possible and still get the best grades. He did the least amount of preparation to get himself onto the computer Olympiad team. He was always thinking about leverage and why businesses would not work.

The reason he started at the Quincy House Grille [the student-run, late-night food joint in their Harvard dorm] was he thought it was mismanaged. They were only selling burgers and shakes and he wanted to sell pizza because cheese was high margin. It was partly subsidized by the government. He felt the only challenge was to buy a pizza oven.

So he needed to run the Grille for two years, and not one [to afford the oven]. Usually you sell the rights to the Grille, the outgoing seniors to the upcoming seniors. But he decided he needed to do it for two, and I said, that’s fine, that’s non-standard. Even back then he did things in non-standard ways, and defied convention. I said, “Ok, you want to do this for two years, but how do you make sure you win? What are you going to bid?” And he asked me the question, “If you had to win, what would you bid?” I said, “highest bid plus 1 dollar?” And he said, “that’s what I submitted.” And he won. He was doing these things other people joked about, and he just seemed so smart for doing them.

“I work at Zappos”

In 1996, Hsieh left a job at Oracle to co-found an online advertising network, LinkExchange, before selling it to Microsoft in for $265 million in 1998. Neo founder and Code.org cofounder Ali Partovi was one of Hsieh’s cofounders and business partners there, while others such as PayPal veteran and Affirm CEO Max Levchin spent formative time at the company.

Partovi: Tony often proposed the opposite of the conventional approach, and astoundingly, he was often right. For example, one of our big cost centers was customer service. Conventional wisdom would be to try to reduce the cost. Instead, Tony wanted to spend more on it: he viewed customer service as a marketing investment that would grow the business. These instincts led later to the amazing brand that is Zappos.

Tony’s creativity was unrivaled and uncontainable. Ideas came to him effortlessly and continuously, from quirky asides to brilliant strokes of genius. He never stayed inside the box, and he’d often get bored with his own creations, leaving others to realize their potential while he forged ahead into something new. 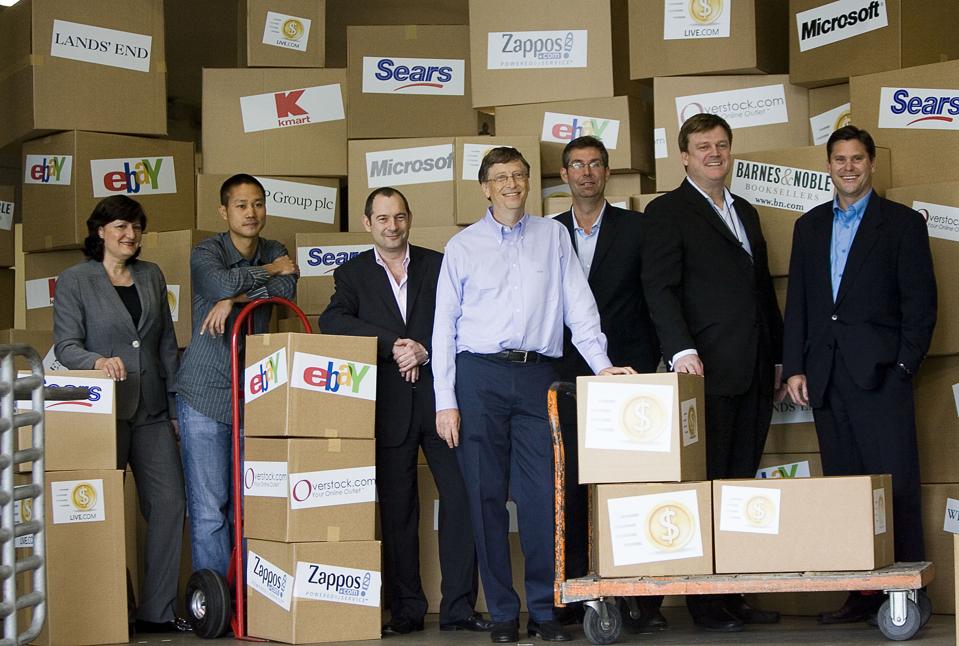 For Hsieh, the next projects were Venture Frogs, a venture capital firm through which he invested in Zappos.com, the shoe selling site he would run as CEO through a $1.2 billion acquisition by Amazon in 2009 until his retirement in August 2020. Cyan and Scott Banister were angel investors in Zappos after Scott’s startup Submit It! was acquired by LinkExchange. Cyan Banister recalls Hsieh flying to San Francisco for poker parties where he’d pitch entrepreneurs on Las Vegas; hours spent setting off fireworks and memorable Zappos office tours.

Banister: Tony was hardly ever seen without a Zappos t-shirt. He could wear anything, but he wore Zappos shirts until they fell apart and had holes in them. Despite having one of the most popular shoe companies, Tony didn’t own many pairs of shoes. He kept his attire minimal and simple. This was one of the many things I loved about him.

His mission in life was to bring smiles and happiness to people everywhere he went. For example, one time I came to Vegas and he asked me to speak on a local podcast thing. I agreed and when I showed up he took me aside and said, “I got you a surprise.” Then he revealed, I kid you not, two adorable penguins. During my show, the penguins went back and forth on the desk in front of the mics. He had a penguin zoo person there to look after them and keep them safe. He later brought the penguins to a bar where more people could see them and marvel at their amazing ness. They were safely outside and everyone coming in couldn’t believe there were penguins in Las Vegas.

He took me on several tours of Zappos. I can count four. Every time I came to town I brought more people with me. I asked him how it was, that so many people were chipper and happy at his company. Something you or anyone would notice right away as you walked around. Tony said, “Oh, that’s easy. I only hire people who smile.” Which was the kind of joking he loved to do. He was incredibly mischievous.  When anyone would ask him what he did or who he was, he would simply reply: “I work at Zappos.” 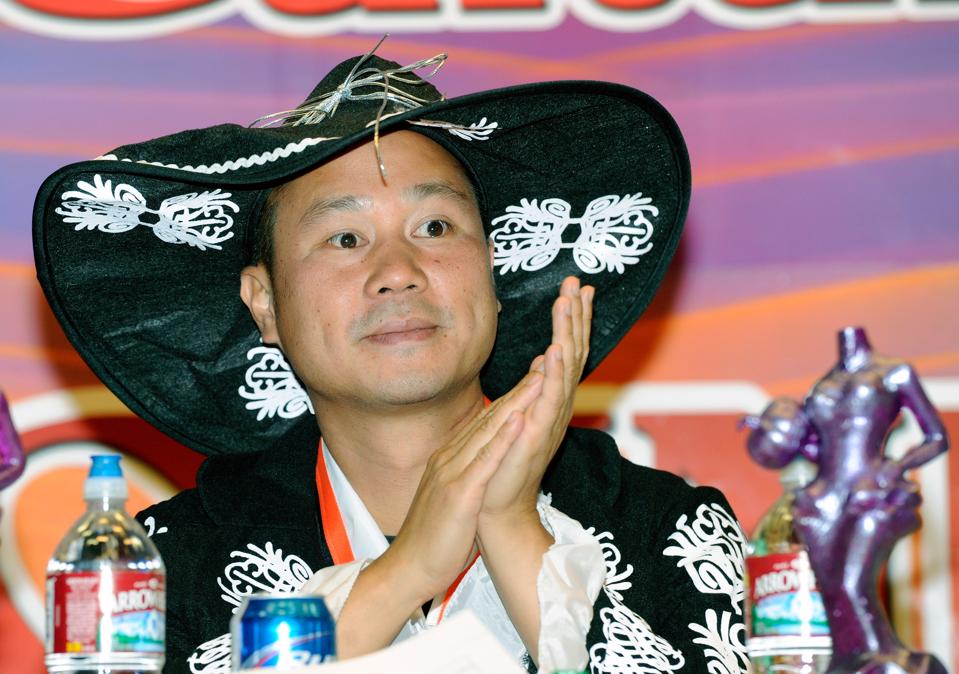 In 2010, Hsieh published a bestselling book, “Delivering Happiness.” He later became known for his Downtown Project, which invested $350 million in revitalizing parts of Las Vegas, and for a lifestyle that included a love for alpacas and living in an Airstream trailer park partially inspired by Burning Man. Maggie Hsu, cofounder of Gold House, worked with Hsieh as chief of staff at Downtown Project from 2013 to 2015, then as technical advisor at Zappos until 2017.

Hsu: Tony loved connecting people and ideas in unexpected ways. He showed me the concept of “engineered serendipity,” where putting together novel combinations of people would lead to unexpected results. He would intentionally schedule back-to-back meetings that had no connection and overlap them, so the 3pm meeting would arrive early and catch the end of the 2pm meeting, and the 4pm meeting the 3pm, and so on, with the people from the earlier meetings sticking around, so by 6pm there would be a large group of people walking around Downtown Vegas and sharing ideas.

We had a holiday party at DTP one year where the space was too big in relation to the number of attendees, so it felt awkward. When Tony walked in, he immediately started rearranging the furniture to block off some of the space and create specific areas so conversations became more natural. The staff was trying to figure out who the guy in the corner was who was rearranging the furniture.

Lin: I think he just very much cared about people. During Thanksgiving, he would invite lots of people over. He just made everybody feel part of his extended family. This happened in college, at LinkExchange, Zappos. He just felt a great need to share and share experiences. It happened at other times of the year, too. At TED, instead of having lunch at the food truck, he’d invite everyone over to his suite or the lobby for lunch. He was just a very giving person.

Banister: Tony was like a leader of a parade. One big happy parade. These things are also complicated because Tony himself was searching for happiness. He ran constant experiments to figure out what happiness is and how to achieve it consistently.

Sacca: If you look at the testimonials you’ll see a common thread, Tony made everyone, regardless of their station in life, realize they were important and that they mattered.

Partovi: Tony taught me that business isn’t about making money: it’s about helping others. He put other people’s interests ahead of his own, and that was the secret to his success.

Lin: His legacy will be that a whole new generation of founders will think about cultural and customer service in a very different way.

Banister: Tony made a dent in the world. Not a lot of people have an impact on people the way he did. I hope that when Covid is over we can have a big parade in his honor and spread joy and love wherever it is needed, because that’s what he would have wanted.

Feed your moths and hide your trousers: the expert guide to making clothes last for ever