With COVID stimulus in sight, L.A.’s desperate nightclub owners hope it’s not too little, too late

This week, Michael Swier had an unusual feeling for a music venue owner in 2020: optimism that government might do something to help him.

Swier, who runs the downtown L.A. independent venues Teragram Ballroom and Moroccan Lounge, had no choice but to shut his doors in March and watch the coronavirus crisis decimate his industry. None of his venues have had a show or any meaningful revenue since county and state regulations silenced clubs and concerts in the spring.

Still, he wasn’t too surprised that federal and local governments did little to help the live music industry. Sens. Amy Klobuchar (D-Minn.) and John Cornyn (R-Texas) had championed a bill, Save Our Stages, that would have offered $10 billion in grants to venues like his. But the bill was embedded within a larger COVID-19 relief package that, although it was passed by the House, stalled out in the Republican-led Senate this fall.

“It’s government,” Swier said. “I think people outside our industry didn’t know how deeply live music would be affected.”

But in the same week that COVID-19 vaccines began to be distributed, a second reason for hope emerged. Save Our Stages, which seemed like another victim of Republican resistance to the stimulus measure, might actually make it into the final sprint as part of a $900-billion economic aid package.

“We’re in a good place,” Sen. Klobuchar told the Los Angeles Times on Tuesday morning after a Senate hearing on COVID-19 and the live events industry. She was careful to note the aid package was, at the moment, still being hammered out, and likely will be right up until Congress adjourns for the holidays. (Congress faces a Friday deadline to pass a bill to avert a government shutdown as well.)

“It’s been too long in coming, and we’re dependent on the package passing. But Save Our Stages has always had bipartisan strength,” Sen Klobuchar said. “I’m very optimistic. We shouldn’t be the Congress that let music die.”

Michael Swier, in the Teragram Ballroom in 2015, says local clubs are waiting “with bated breath” to see whether the stimulus passes.

If a COVID-19 relief bill — one with Save Our Stages provisions included — is signed into law by President Trump in the waning days of his presidency, it might keep venues alive until enough Americans receive a vaccine and, perhaps in late spring or summer, shows can safely resume.

“We’re waiting with bated breath,” Swier said. “We’ve been on the cusp a couple of times, so hopefully this will happen and everyone can take a big breath of fresh air.”

For months, music venues big and small, in major markets and smaller ones, have been paralyzed with uncertainty about how to move forward. As long as the pandemic continued to rip through the country — on Wednesday alone, California tallied more than 50,000 new cases and 400 deaths, both records — indoor concerts seemed a distant hypothetical. Even mega-promoters like Live Nation and AEG have seen revenues vanish and instituted draconian layoffs and cutbacks.

Groups like the National Independent Venue Assn. have pushed for federal relief since summer, and Save Our Stages looked like the best hope. It would create a pool of $10 billion that the Small Business Administration would tap for grants to independent venues. The measure was included in the Heroes Act passed by the Democratic-led house in November, but as negotiations over a comprehensive bill ground down in the Senate, its prospects dimmed, as did any sense among venue operators that help was ever coming.

“We’ve lost millions in revenue. It’s probably been the worst year for our industry since Prohibition,” said Mitch Edelson, who owns the Silver Lake venue El Cid and Catch One, the Mid-City venue and dance club famous in Black LGBTQ history. As Save Our Stages seemed thwarted, Edelson said, “Was I surprised? No. Disappointed? Incredibly. We bailed out the airlines, but how about the venues where we all have memories?” 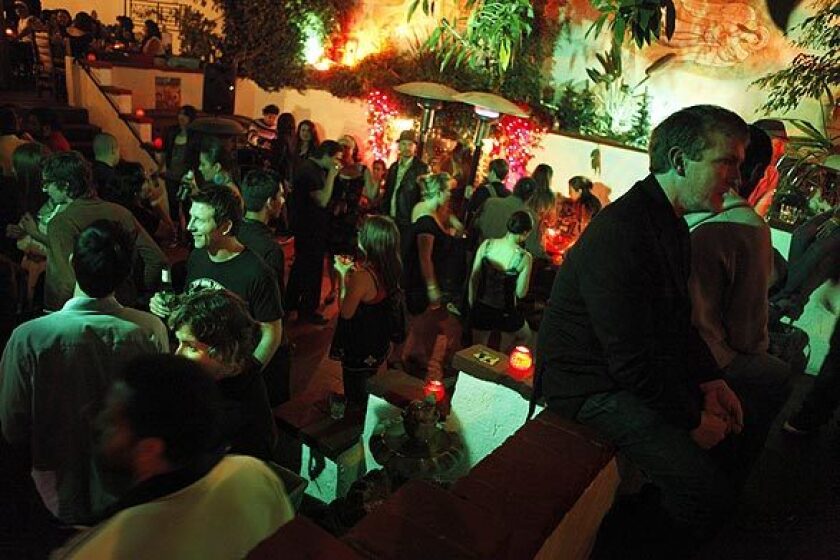 Some clubs had to turn to their fanbases to keep the lights on.

“After 24 years, the pandemic just exhausted me, and I thought maybe now was the time to throw in the towel,” said Scott Craig, co-owner of the Silver Lake LGBTQ nightclub and electronic-music mainstay Akbar. The club announced this week it was on the verge of closing. A successful GoFundMe effort raised $180,000, but “we don’t expect to open until early summer. It’s heartbreaking,” Craig said. “This bar was created out of the AIDS epidemic, and with the present pandemic, not being able to console people physically is real tough. Government needs to recognize the value of small institutions like ours.”

With just days left in a 2020 often bereft of good news, the first shipments of vaccines offered a measure of relief, and a vague timeline around which venues could begin to plan. But the day when they can fling open their doors might still be six months or more in the future. Unlike at many restaurants, opening at reduced capacity makes little sense for a venue paying to book bands and staff for a show.

It would be a bitter irony if clubs that have lasted this long ran out of funds now, with an end to the pandemic finally in sight.

“The vaccines are going to take months to be fully effective, so we have to help these businesses so they don’t fail,” Sen. Klobuchar said. “Smaller venues and smaller markets operate on even slimmer margins. There’s a whole ecosystem of jobs there, so we’ve got to make sure they survive the next few months.”

Sen. Klobuchar said on Tuesday that, so far, all four of the main negotiators of the bill — House Speaker Nancy Pelosi, Senate Minority Leader Chuck Schumer, Senate Majority Leader Mitch McConnell and House Minority Leader Kevin McCarthy — had included Save Our Stages provisions in their proposed packages of legislation.

Sen. McConnell’s approval was widely seen as the bill’s main obstacle, but even he’s had conversations with Kentucky musicians Sturgill Simpson and My Morning Jacket’s Jim James, who pushed for Save Our Stages’ relief measures. Although nothing is final yet, Save Our Stages seems closer to becoming law than it ever has been.

For L.A. venues in dire straits, the money would provide, as Swier said, a “bridge to the other side” of the pandemic. After it’s signed into law, eligible independent venues could apply for grants of up to 45% of their 2019 revenue, as much as $12 million. (It’s uncertain how long it would actually take for applications to be processed and checks to arrive.) With another six months of shutdown looming even with widespread vaccination, that money could mean the difference between shuttering and surviving.

“There are still some hard months to go through,” Swier said, “but this relief will help.”

“It does feel like almost time to start our engines,” Edelson agreed. “It’s been super painful with bills stacking up and the city and state still expecting us to pay for licenses and taxes. I know it’s going to take patience, but I really hope this stimulus comes through.”

But in the meantime, venue owners like Akbar’s Craig are crossing their fingers that the language from Klobuchar’s Save Our Stages bill makes it over the finish line, for Silver Lake gay disco clubs and small-town juke joints alike.

“I always did like her,” Craig said, laughing. “All across the country, these institutions need help, otherwise all the life in these towns will go away. L.A.’s music scene is incredible, and Lord knows large corporations have been getting help. I can imagine that there’s a great little bar in Omaha that can really use these funds too.”