Jimmy Rabbitt, a pioneering freeform radio DJ who helped expose outlaw country music to Southern California, died of natural causes on Nov. 25, according to Robbyn Hart, a longtime friend and colleague. He was 79.

Best Gifts for Cyclists That Will Actually Get Used

Rabbitt came to prominence during the late 1960s and early ’70s, a transformational period for rock radio. His popularity in the L.A. market may have been greatest during his end-of-the-’60s stint at Pasadena’s KRLA, but it was while DJing at KLAC and KBBQ in the early ’70s that he began weaving country into his rock playlists. He called the blend “outlaw music,” in a phrase that echoed the term “outlaw country” coined by Nashville journalist Hazel Smith around the same time.

Rabbitt became associated with outlaw country, introducing Willie Nelson and Waylon Jennings to California audiences while moonlighting as a singer with his band Renegade. His musical career peaked with a songwriting credit on David Allan Coe’s 1976 country hit “Longhaired Redneck,” a song that featured the line, “She says Jimmy Rabbitt turned her on to my last album.” The lyric summed up his appeal as a DJ: Whether he was on the AM airwaves or later on satellite radio, he exposed listeners to music they may not otherwise have heard.

Born Dale Payne in Holdenville, Okla., on Aug. 18, 1941, Rabbitt was the son of an Air Force airman. His father cycled through different posts, so he wound up being raised by his grandparents in Tyler, Texas. After high school, he attended American University in Washington, D.C., for a year — he worked briefly at the college station, ultimately getting thrown off the air for playing Little Richard — before heading back to Texas to attend Tyler Junior College as a broadcast major.

His big break arrived when the mother of local KGKB disc jockey Randy Roberts came into the store where Payne was selling shoes. She loved Payne’s voice and told her son to hire him; he got the next available slot at the station in the fall of 1962. Working under the name Fast Eddy Payne, he stayed on the air from 9 a.m. until 6 p.m. during those early years, starting his shift with country music, playing pop for “housewives” during the day, then transitioning to rock ’n’ roll as soon as school let out.

Payne spent some time in Corpus Christi, Texas, before returning to Tyler to be a program director at KDOK, staying at the station until it left the air in 1964. By then, he’d earned the attention of Gordon McLendon, who ran the powerhouse AM station KLIF in Dallas. McLendon hired Payne for KLIF, which was run by general manager Charter Payne. Loath to have an on-air personality share his surname, the GM dubbed Fast Eddy Payne “Jimmy Rabbitt.” Years later, Rabbitt claimed the switch happened so fast that he was “shell-shocked,” but the name stuck with him for the rest of his professional life.

McLendon pushed Rabbitt’s arrival at KLIF with a series of promotional stunts highlighted by painting the underside of overturned cars with the slogan “I flipped for Jimmy Rabbitt” and scattering them alongside the freeways. KLIF also arranged for Rabbitt to introduce the Beatles at their September 1964 concert at Dallas’ Memorial Auditorium. Soon, Jimmy Rabbitt was the top pop DJ in Dallas, his spins helping break such Texas acts as the Sir Douglas Quintet and B.J. Thomas.

Rabbitt also tried his hand at singing a similar kind of garage rock ’n’ roll, releasing the stomping singles “Wishy-Washy Woman” and “Pushover” in 1965; he performed the latter in the Larry Buchanan-directed exploitation film “High Yellow.” He rode the psychedelic wave by recording a cover of the Count Five’s “Psychotic Reaction” with members of Mouse and the Traps as Positively Thirteen O’Clock, but his time as a Texas rocker was cut short when he headed to San Diego to DJ at KCBQ in 1968. 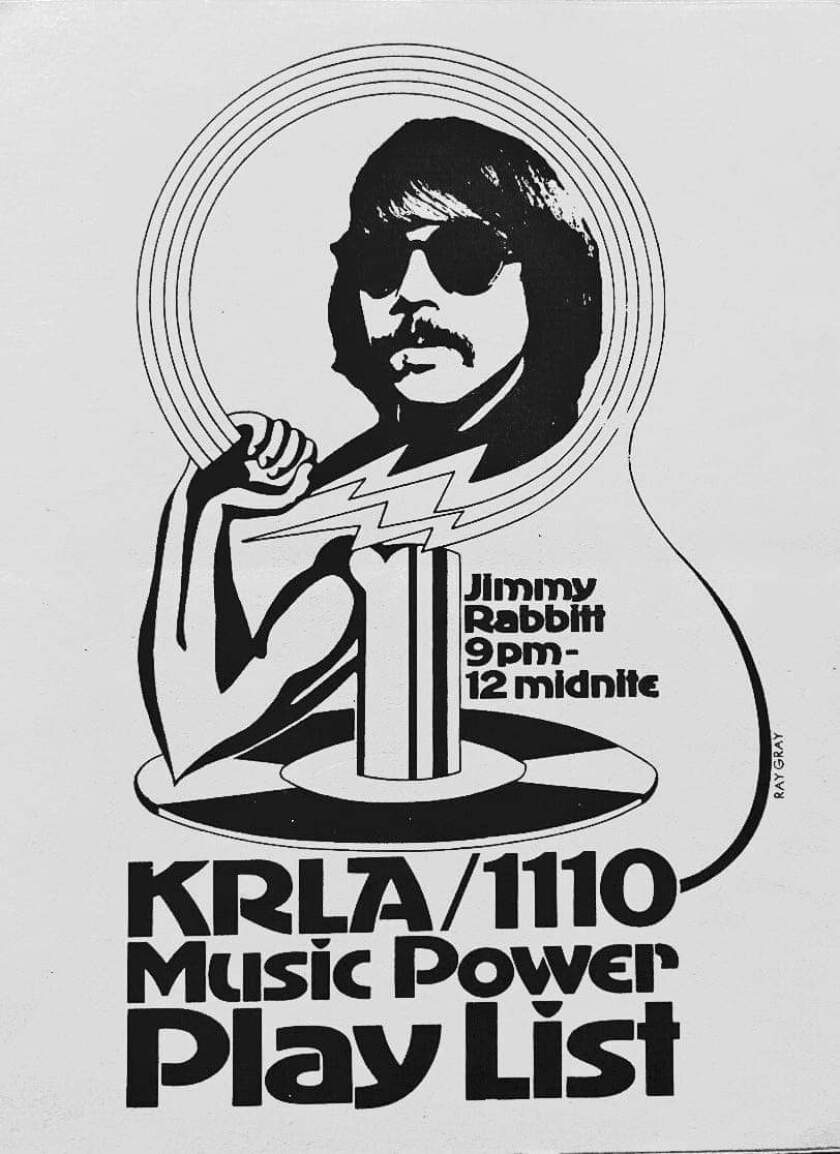 A poster of Jimmy Rabbitt on KRLA.

Rabbitt’s time at KCBQ was short-lived. He next went to KRLA, where he quickly became a sensation, earning the honorarium “Rock Jock of the Year” from The Times. By the early 1970s, he was known simply as “the Rabbitt” and he started to expand his reach, becoming one of the first nationally syndicated DJs on the ABC FM Network. Locally, Rabbitt left a station whenever he found playlists too constrictive, a situation that happened often in the early ’70s.

As he flitted through radio gigs, he also performed country music with his band called Texas, a development that secured him a deal with Atco Records in a deal shepherded by producer Jerry Wexler. The Atco LP was shelved — it would eventually come out in 2015 — but Rabbitt’s embrace of country extended to his show, which tested the patience of the rock-oriented KMET. He moved to KLAC AM and then KBBQ, stations that gave him the freedom to establish the sound of outlaw country.

As a musician, Rabbitt existed on the fringe of progressive country. He revamped Texas as Jimmy Rabbitt and Renegade, releasing an eponymous LP produced by Waylon Jennings on Capitol Records in 1976. The album didn’t sell but “Longhaired Redneck,” a song Rabbitt co-wrote with David Allan Coe, did, peaking at No. 17 on Billboard’s Country chart, giving him his biggest success as a performer.

He stayed with KBBQ as it transitioned to KROQ, adapting to its rock-oriented format launched in 1975. Rabbitt stayed with the station until he headed to Aspen, Colo., to work as a program director at KNSO in 1978. After about a decade at KNSO, he headed to Dallas, where he worked for Satellite Music Network, the first satellite radio station. During his last decade, Rabbitt split his on-air time between a show at KAFM in Grand Junction, Colo., — the city he made his home — and KOCI-Newport Beach, where he hosted “El Conejo’s Back on the Beach.”