What happens when #FreeBritney fans have a Zoom rally? Love for Spears grows stronger

After Britney Spears posted a photo debuting her new haircut Wednesday, fans participating in a virtual #FreeBritney rally squealed with delight over the latest update from their pop princess.

The embattled pop star’s post came shortly after a hearing in her protracted conservatorship case — called a guardianship in other states — ended in Los Angeles with no substantive developments in the circumstances of her care.

The timing, and her hopeful sentiment, was a coincidence cheered on by fans who have been painstakingly decoding the “…Baby One More Time” singer’s Instagram posts for clues about her well-being as the contested arrangement drags on.

On Wednesday, North Hill Street outside the Stanley Mosk Courthouse in downtown L.A. didn’t have its usual buzz because the fandom protesting Spears’ 12-year conservatorship had moved online due to the latest surge in the COVID-19 pandemic.

Their typical enthusiasm was reserved for Zoom meeting ID 972 3844 2094 (passcode: britney), the viral campaign’s first virtual rally, which allowed more than 500 fans from around the world to converge screen-to-screen. More than 120 people did so with their video turned on, putting a 2020 spin on the digital grassroots movement that began as a hashtag in April 2019.

The meeting was open to the public, much like an in-person rally, and publicized online to fans and members of the media.

The so-called Britney Army danced to organizer Kevin Wu’s club-ready playlist of her hits, including remixes of “Lucky,” “Piece of Me” and “Toxic.”

Guest speakers used the platform to talk about conservatorship abuse, which the #FreeBritney movement says it’s been fighting since 2008, when the singer was placed in father James “Jamie” Spears’ care under the California probate court system. The conservatorship began after her very public unraveling in 2007.

Catalyzed by the viral campaign, several developments came over the summer as Spears and her team began to make more candid statements about her personal affairs in court filings. Among them: repeated requests to relieve her father of his oversight duties altogether and reassign control of her more than $60 million in assets to other conservators of her choosing. Spears also has disclosed in court documents that the conservatorship is voluntary.

While that legal drudgery was the focus of Wednesday’s rally, the event frequently gave way to a party vibe when fans showed their love for the “Womanizer” hitmaker. Clad in Britney T-shirts and wild glasses and displaying their custom Spears video backgrounds, fans mingled online. L.A.-based drag queen Bible Girl hosted a game of Britney trivia, with admirers from as far away as Egypt competing for a chance to win #FreeBritney masks and custom jewelry.

An influencer read a poem styled after “’Twas the Night Before Christmas” — reimagined as a feverish fantasy about Spears herself surprising them in the meeting — that drew a range of reactions involving tears and awkward blank stares.

Zoom user Chuck Downs used a rally poster for his background that read: “Britney is an able bodied 38 year old woman with the rights of a child.” (Spears is now 39.)

Documentary journalist Gabriella Adèr, who lost her trivia round, used a camera crew to document the online event.

Britney Spears fans and probate-reform advocates in the #FreeBritney campaign participate in a virtual rally Wednesday.

Participants identifying themselves as Spears fans and legal advocates shared personal stories about what drew them to the movement. They explained how her music has helped them through trying times. Some said they joined the rally to return the favor to the singer. Probate-reform advocates not connected to Spears also attended to share their experiences with conservatorship abuse.

It all went down Wednesday morning and into the afternoon as they eagerly awaited a courthouse update from #FreeBritney organizer Leanne Simmons, who was in court to listen to the hearing. Afterward, they stuck around to gush over Spears, and their communal glee over her new Instagram post was just icing on the cake.

The hearing itself settled no issues in the long-running case, which is still determining whether Jamie Spears should maintain a say in her two-part conservatorship as he has for years. He has since relinquished control in the conservatorship of her person, but remains co-conservator of her estate with the financial fiduciary, Bessemer Trust.

But the seemingly fraught father-daughter relationship has continued to garner interest from fans and the public. (Three new hearing dates, including one to audit Jamie Spears’ finances on Britney’s behalf, have been set for next year.)

“This is how you create redress and reform,” said Rick Black, director of the Center for Estate Administrative Reform. He applauded Wednesday’s turnout, which peaked at one point with 300 concurrent participants.

“Redress [is] about supporting people being victimized by the system today … and that takes coalitions like the #FreeBritney movement speaking up, demonstrating and making sure that the courts [are aware] that they’re being watched,” he added.

Black took part in a Q&A with organizer BJ Courville, who drew on his guardianship-reform expertise to explain how conservatees can be taken advantage of by the legal community in equity court proceedings.

He told them he believes Spears’ case is among the many “used to exploit the vulnerable.” He, like many advocates, has been using Spears’ case to highlight ongoing issues of probate court abuse, which he likened to organized crime.

Black said that although Spears had issues many years ago, she has long since proved that she’s “a loving mother, an excellent performer and very capable of feeding herself, sheltering herself and clothing herself” — a statement that drew support from several participants.

The last trio of basic-care requirements he mentioned are grounds to dissolve the conservatorship. He also advocated for free counsel for conservatees and blasted Spears’ court-appointed attorney, Samuel D. Ingham III, for collecting fees in her case, explaining that it creates a financial incentive for him to prolong the arrangement.

“Britney doesn’t deserve this,” added reform advocate Venus Gist. “Whatever struggle she’s had in her past, she deserves to enjoy her children and her money. She needs our support. It just shows us there’s a spectrum: Whether you’re very wealthy or low-income, you can be a victim to this probate court system.” 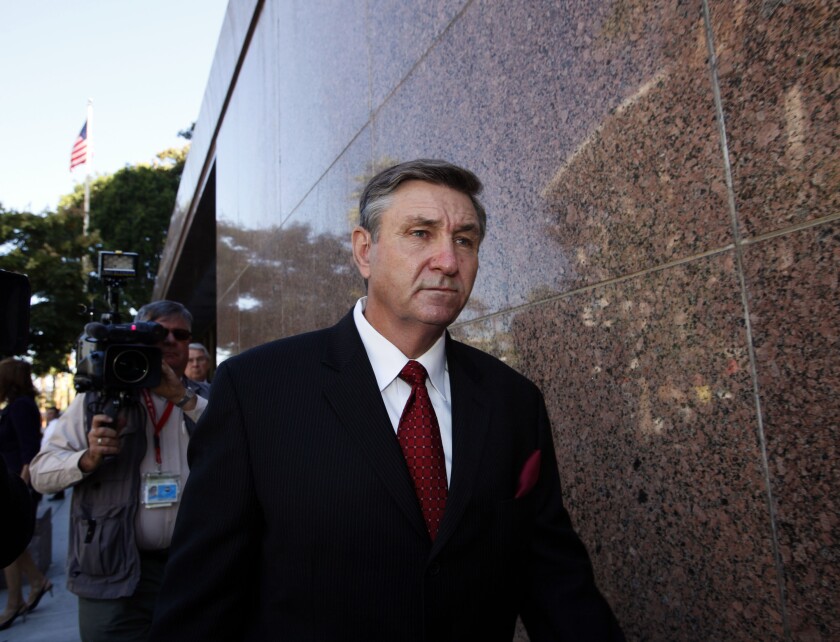 Incidentally, Spears herself has embraced the #FreeBritney movement, despite her father dismissing its followers as “conspiracy theorists.” In September, Ingham welcomed the scrutiny and said it was “a reasonable and even predictable result of James’ aggressive use of the sealing procedure over the years to minimize the amount of meaningful information made available to the public.” He said his client “welcomes and appreciates the informed support of her many fans.”

To #FreeBritney organizer Wu, who heads up the L.A. arm of the campaign, Wednesday’s dispatches from the courthouse offered validation after feeling gaslit by Spears’ team, specifically former business manager Lou Taylor.

“They tried to lead the public to believe that Britney wanted privacy, that she didn’t support the movement and that the movement was a bad thing for Britney, when it was confirmed in official court fillings that Britney welcomes the support of her informed fans,” he said in a statement to The Times.

Last month, the singer’s team said that she took a professional break to protest her father’s broad control over her career and finances. That break began in January 2019, when she abruptly canceled her “Britney: Domination” residency in Las Vegas before it even began, then checked into a mental health facility. She has not performed live since 2018. Spears’ attorneys have said that the singer was “afraid of her father,” which Jamie Spears’ attorney, Vivian Lee Thoreen, objected to.

On Tuesday, Jamie Spears told CNN that he and his daughter were on “good terms” until August of this year, when the singer expressed her wishes to have him removed entirely as conservator of her estate. He said that he and his daughter haven’t spoken since August. Nonetheless, he said he “will continue to provide unwavering love and fierce protection against those with self-serving interests and those who seek to harm her or my family.”

With the success of the virtual rally, #FreeBritney organizers said they plan to hold more events to connect fans globally and show their support for Spears.

“Being able to unite as a movement in the online world gave us a sense of belonging,” Chile-based organizer Pilar Vigneaux said in a statement. “We have been called conspiracy theorists for so long that gathering with proof in our hands that we were right has been a powerful experience. We are looking forward to keep supporting Britney and to rally by any mean[s] available to us!”