Neil Robertson soaked up the applause after his epic win over Mark Williams (Picture: Zhai Zheng)

Neil Robertson is confident heading into the final of the Masters, unsure if the tournament can throw anything else at him after a wild ride to Sunday’s showpiece.

The Thunder from Down Under came through an absolutely incredible match in Saturday afternoon’s semi-final against Mark Williams, not only bouncing back from 4-1 and 5-3 behind, but getting over the line in the deciding frame despite needing two snookers.

It was a monumental effort from the Australian, who made breaks of 95, 102 and 119 along the way to the memorable win to book his spot in a fourth Masters final.

That was far from the only hurdle he has cleared in north London this week, overcoming Ronnie O’Sullivan in the quarter-finals, in front of a partisan Alexandra Palace crowd, and a gruelling first round contest against Anthony McGill, before Robertson had really hit his stride.

It has been a fine run to the final, and the 39-year-old is confident he can win the war after emerging from the arduous battles so far.

‘You certainly have that confidence where it’s like, “What else can be thrown at me?”‘ Robertson said after beating Williams.

‘I played Ronnie in the quarters, in that cauldron of fire, coming up against the really good crowd that were going for him.

‘Today the crowd was fantastic. It was really fair, like it was with Ronnie, but I think they really wanted Mark to win. 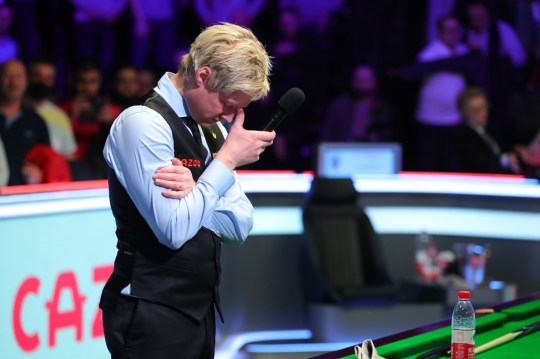 Robertson had an emotional few moments after his incredible comeback in the semis (Picture: Zhai Zheng)

Waiting for Robertson in the final is Barry Hawkins, who has upset the odds in all three of his matches to make it to Sunday, ousting Shaun Murphy, Mark Selby and Judd Trump.

The Thunder from Down Under is looking forward to a clash with the Hawk, who he respects on and off the table and knows cannot be underestimated on the biggest stages.

‘One of the absolute nicest guys you can meet and a wonderful player who’s got a really, really good record in a lot of the big events,’ said Robertson of Hawkins.

‘It will be a really good match because it will be played in the right way and I’m really looking forward to it.’ 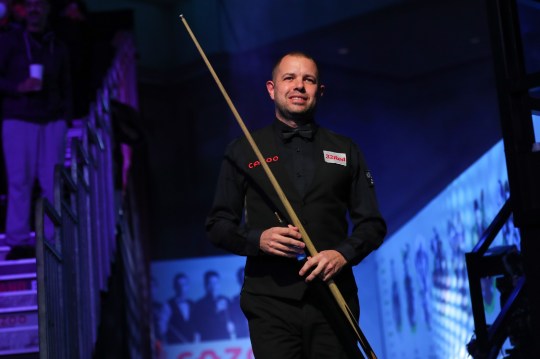 Robertson has spoken about treating all tournaments almost equally, and while he has been loving the big match atmosphere at Ally Pally he seems to be sticking to that ethos.

The Aussie would love to raise the Paul Hunter Trophy on Sunday night, but is not getting any more excited about this one than many other events.

‘It doesn’t really mean anything, it’s just a chance to win another tournament,’ he said. ‘We play in a lot of tournaments, I don’t really try harder in this one or that one, you try your best no matter what.

‘It’s a chance to play in front of a wonderful arena, in a best of 19 and I’m really looking forward to it.

‘I think probably 15 years ago [the Triple Crowns were most important]. The Tour Championship is top eight in the world on the one year list and that’s the hardest tournament to win, barring the World Championship, playing the top eight guys on form, best out of 19 straight away.

‘Then you’ve got this where you’ve got a couple of thousand people as well, which adds to it.

‘Champion of Champions is another one that I really hold close. We’ve got some really good, marquee events now, it’s not just the Triple Crowns.

‘This is obviously one of the biggest we have and I’d love to win it.’

Robertson and Hawkins contest the final over two sessions on Sunday, starting at 1pm and 7pm in a race to 10 frames.

For more stories like this, check our sport page.