US climate emissions rose in 2021

In the first year of the pandemic, as many hunkered down and businesses closed up shop, the planet got a bit of a respite from the unrelenting climate pollution that’s causing global warming. The sudden halt to the economy caused US emissions to plummet by a record 10 percent.

But in 2021, Americans got back on the road, crowded onto airplanes again, and ordered even more goods online. And now greenhouse gas emissions are fast approaching pre-pandemic levels.

Greenhouse gas emissions should be growing more slowly than the economy. That would mean “for every unit of energy we produce and consume, we are emitting fewer greenhouse gas emissions,” Kate Larsen, a co-author of the Rhodium report, told Vox. “We do that by generating more energy from clean sources, like renewable electricity and charging vehicles on renewables.”

Climate pollution is still lower, by 5 percentage points, than where it was pre-pandemic. But to hit President Joe Biden’s pledge to slash pollution in half by 2030 over peak levels, emissions need to be moving away from those levels, not toward them.

Most of the increase in 2021 greenhouse pollution came down to two sectors — transportation and electricity, which make up about two-thirds of emissions. Both had the biggest jump in emissions in 2021 thanks to two trends: The US is moving more goods with heavy, diesel-burning trucks than it ever did before, and coal saw a minor comeback. Both of these trends are alarming signs of how, without political intervention, the economy could become more polluting this decade.

There were two major changes in the power and transportation sectors in 2021 that accounted for most of the rise in emissions.

In the power sector, emissions rose overall by 6.6 percent from 2020: Demand only rose slightly, so that wasn’t the primary reason for the increase. Instead, it was greater reliance on dirty sources. US coal generation rose for the first time in over six years, jumping 17 percent in a single year because natural gas became more expensive. Renewable generation (meaning hydro, solar, and wind) also hit a record 20 percent of the energy mix in 2021, rising by 4 percent (far less than their growth rate the year before). The increase was not enough to offset more coal dependence.

Freight pollution is driving most of the increase in the transportation sector: Emissions climbed 10 percent from transportation in 2021, but road traffic and flying are still under where they were pre-pandemic. The fastest rise in emissions is happening in freight — the movement of goods by truck, plane, or ship. Rhodium uses diesel emissions as a proxy for looking at heavy trucks that move goods around the country, and found that road freight’s emissions are already slightly above 2019 levels.

This is even understating the impact from rising freight shipments — US data only looks at the movement of goods within the country’s borders, so the data leaves out international shipments by air and sea. 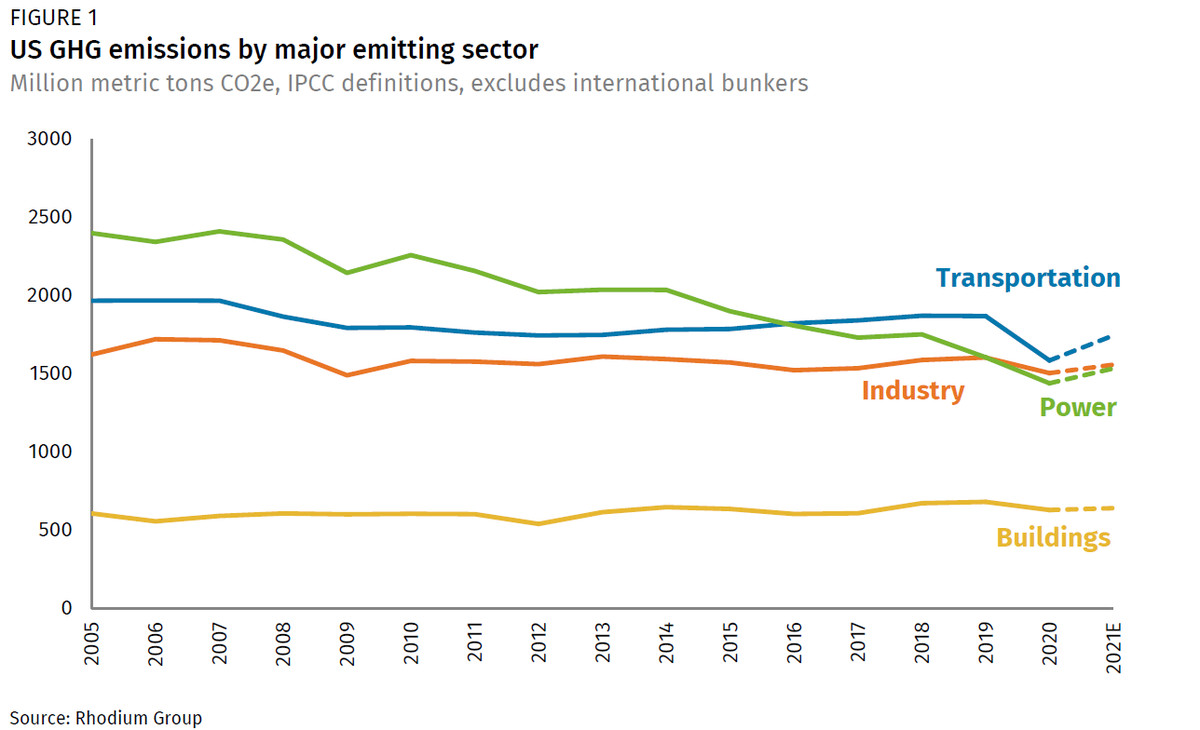 Freight and coal use in the power sector is helping drive the rise in US climate pollution closer to pre-pandemic levels.

These trends also mirror what’s happening globally. Global emissions last year also grew 4.9 percent compared to 2020, making up for almost all of the decline from the first year of the pandemic, according to a separate analysis from Global Carbon Project, which is part of the World Climate Research Programme. And, worryingly, the initial data suggests global coal use hasn’t peaked yet.

If coal grows just modestly this year, Global Carbon Project warns the world will beat the previous record for coal pollution set in 2014. “Despite the tragedy of the Covid pandemic in 2020, the strength and nature of the rebound in fossil CO2 emissions shows the world has done little to focus on a green recovery,” said the report’s co-author Glen Peters, a research director at the Cicero Center for International Climate Research in Norway.

There’s only one way to break this cycle

The world is still trapped in the same cycle where rising growth means rising use of fossil fuels. Rhodium’s new data shows how easy it is for the economy to become more polluting even if there’s still growth in renewables. What the US needs to do to address climate change is break this pattern: “The best way to solve our climate problems is continue our economic growth, but to have emissions decline,” Larsen said.

The promise of the $555 billion in climate spending in the pending Build Back Better legislation is that the US can still build an offramp. Its investments in renewables and utilities would accelerate a clean power sector and the closure of coal-fired plants, and expand access to electric vehicles. It would also encourage electric vehicles for last-mile deliveries that are needlessly polluting. The bill’s climate provisions are historic, in that they invest in “off-the-shelf, ready-to-go technologies that are commercially available and easy to build up in America today,” said Jesse Jenkins, an environmental engineering professor at Princeton University who is advising lawmakers on the bill.

In December, the House passed the Build Back Better bill, which would inject funding into deploying these readily available solutions and incentivizing research into the harder-to-tackle emissions. One important part of the bill incentivizes renewable electricity and transmission that will help finally close the remaining 183 aging coal-fired power plants in the country.

For rising freight emissions, the bill helps electrify more vans and vehicles that deliver packages to your door, and run equipment used at airports and ports on renewables. Some of its other provisions include $3 billion in direct loans for manufacturing zero-emissions trucks and aircraft, and another $2.5 billion for using offshore wind to power equipment at ports. For heavy-duty trucks, there’s $5 billion to replace polluting trucks with cleaner vehicles. The infrastructure bill that Biden signed into law last year also helps make a dent in transportation emissions by paying for more electric vehicle charging stations and cutting pollution at ports.

Without Build Back Better and other economic and political interventions, domestic emissions could actually be on the rise again above 2019 levels. (This comes from separate Rhodium modeling that’s based on the pessimistic assumption that there will be no federal legislation, no new EPA regulation, and no further state action.) In this world, pollution levels in 2030 would remain just 15 to 25 percent below the US peak in 2005.

The US doesn’t have to be headed down this path. Larsen explained that it is important for this transition “to happen very quickly if we’re going to be able to begin to see a reduction in emissions by the end of this decade.”