Robert Durst — who was serving a life sentence for the murder of his friend, Susan Berman, after appearing to confess about it during the filming of the HBO documentary ‘The Jinx’ — has died. 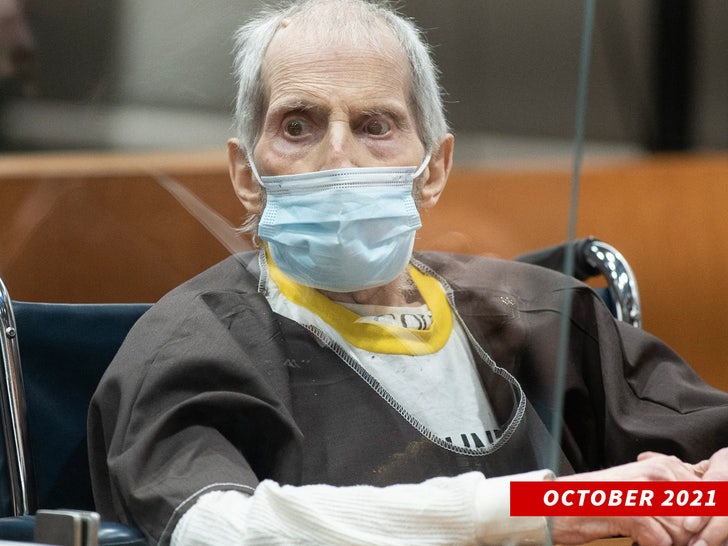 Of course, Durst recently came down with COVID-19 … and was placed on a ventilator as a result. This came after he was found guilty by a jury of his peers, and was sentenced to life in prison without the possibility of parole.

As we reported … he’d been in and out of court over the past few years for his murder trial following a 14-month break due to the pandemic. He had been accused of shooting Berman in the head at her Bev Hills home in December 2000 … allegedly because she may have had deets about the mysterious death of his wife, Kathie, who disappeared in 1982.

You’ll recall Durst was busted in 2015 just weeks after “The Jinx: The Life and Deaths of Robert Durst” started airing on HBO … prompting the LAPD to reopen the Berman case.

The miniseries explored bizarre and disturbing allegations against Durst and why he was alleged to have been involved in the deaths of Susan and Kathie. The doc also dove into how he was acquitted for the murder of a Texas neighbor in 2001.

The jaw-dropping moment came at the end of the documentary when Durst was caught on a hot mic seemingly confessing to the murders saying, “What the hell did I do? Killed them all, of course.” Durst had thought his mic was turned off after excusing himself to use the bathroom.

Durst was born on April 12, 1943. His father was a wealthy New York real estate mogul and Durst, the eldest son, was the heir to that empire worth over a billion bucks. He married then-20-year-old Kathie in 1973.

A decade later … Durst reportedly told police he dropped off Kathie at a train station in upstate NY in Westchester County and claimed he never saw her again. He reported her disappearance several days later.

Durst moved to Texas in 2000. A year later … a torso was found and cops found garbage bags that had human limbs and other items connected to the building where Durst lived.

He was charged for the murder of his neighbor but he skipped a court date and was on the run. Authorities found him in Pennsylvania but he was ultimately found not guilty and acquitted in 2003.

Ryan Gosling portrayed Durst in the 2010 film “All Good Things.” Following the release of that film, Durst hit up a filmmaker to pitch the documentary that eventually became ‘The Jinx,’ which aired on HBO in 2015.