In early December, after a two-year hiatus from the stage, Bad Bunny went home to Puerto Rico to give his most dedicated fanbase the concert of their lives. The reggaeton star may have delivered with his “P FKN R” show — a two-day, $10 million spectacle and tribute to Boricua culture at a massive 60,000-person stadium in San Juan. But it also turned out to be a superspreader event.

All concert-goers were required to show proof of Covid-19 vaccination and to wear masks or else risk a $100 fine and removal from the concert. Though their vaccination status was verified at the door, there wasn’t much enforcement of the mask mandate, and many attendees took them off once they got to their seats. As a result, an estimated 2,000 attendees tested positive for the virus afterward, contributing to a 4,600 percent jump in cases on the island last month. December 2021 accounted for a third of the total cases recorded in Puerto Rico, and now the island’s positivity rate is 36 percent.

The concert was emblematic of what has gone wrong in Puerto Rico — and in other parts of the US amid the spread of the omicron variant. Many Puerto Ricans feel more protected than they actually are due to the island’s high levels of vaccination, but two shots of vaccine have proved not to be a sufficient defense in the face of omicron, which is more transmissible than past variants. And more people getting infected has meant more people are ending up in the hospital, straining medical infrastructure.

Just a month ago, Puerto Rico appeared to be in a better position than other parts of the US. It has among the lowest Covid-19 death rates in the US, and for months led the country in vaccination rates. A unified messaging campaign from the scientific community and government leaders has allowed the island to largely avoid politicization of the virus and the vaccine. And Gov. Pedro Pierluisi has implemented some of the strictest vaccine mandates in the country. Without all of that, the latest wave could have been much more deadly.

But even Puerto Rico wasn’t immune to the highly contagious omicron variant, which has contributed to a spike in caseloads and hospitalizations across the US. Gatherings during the holiday season, which in Puerto Rico spans from Thanksgiving to mid-January with Three Kings Day celebrations, have exacerbated the problem. And given that many Puerto Ricans are vaccinated — nearly 78 percent as of January 6 — infections on the island have been generally mild, giving people a false sense of security during the latest wave.

“It’s a new variant, it’s Christmastime, and there’s a high vaccination rate, so people feel more free to go out because they’re vaccinated. And it seems like, though, omicron is eluding the vaccine, at least for contagion,” said Maria Levis, CEO of Impactivo, a public health consulting firm in Puerto Rico.

Public health officials project that the spike will last for about another two weeks. In the meantime, the Puerto Rican government has done what other US states and territories have refused to do, reviving restrictions on gatherings, travel, and school openings at the recommendation of scientists and public health officials. However, there is not much it can do about persistent hospital staffing shortages, which continue to threaten not only the welfare of Covid-19 patients, but also others seeking lifesaving care.

The Puerto Rican government is taking steps to prevent another wave, but it’s meeting some resistance

At the advice of public health officials, the Puerto Rican government reacted quickly to the onset of omicron by reviving and strengthening restrictions that had previously been in place.

The governor has delayed the start of public schools by two weeks and recommended private schools do the same. He has made booster shots mandatory for employees in the health and education sectors, and all schoolchildren age 5 and older must have their first dose by January 10.

Drivers wait in line at a drive-through testing center operated by the Puerto Rico Health Department at the Hiram Bithorn Stadium parking lot in San Juan, Puerto Rico, on December 18, 2021.

Those attending mass events now have to provide not only proof of vaccination, but also a negative Covid-19 test taken within 48 hours of the event. All establishments serving food and drink have to require vaccination or a negative test for entry, and capacity at those places is limited to 50 percent or 250 people maximum. All passengers on flights to Puerto Rico also have to show a negative test. And businesses must close between midnight and 5 am and are not allowed to sell alcohol during those hours.

Major events on the island have consequently been canceled or changed to a virtual event, including the Miss World pageant and a 10,000-person New Year’s celebration.

For some Puerto Ricans, those measures don’t go far enough. Some have raised concern about the governor’s decision to delay the start of school rather than what they see as the safer option: moving back to remote instruction. Others see the governor’s actions as wise. But overall, there is notable fatigue over Covid-19 prevention protocols among young people.

The highest incidence of cases during the recent spike has been among people ages 15 to 39, said Victor Ramos, president of Puerto Rico’s College of Physicians, which is advising the governor on pandemic strategy. The virus has been spreading in their workplaces, their schools and universities, holiday celebrations, and large events — and they have been bringing it home to older, more vulnerable populations.

Two years into the pandemic, it’s difficult to convince those young people to stay home, especially when, due to widespread vaccination, the typical case of Covid-19 in Puerto Rico hasn’t resulted in symptoms more serious than those of a cold. Many also believe that with Covid-19 becoming endemic, it’s only a matter of time before they get the virus, so they might as well get it over with. The trouble with that strategy, however, is they still could spread it to people who are at higher risk for hospitalization.

“The symptoms have been really mild for folks that have gotten it, and that also plays into how serious people think it is,” Levis said. “People are also just tired.”

Meanwhile, public health officials are warning Puerto Ricans that two doses of the vaccine is not enough. Less than 40 percent of the population has received a booster. But problematically, not everyone is eligible for a booster shot yet, since it hasn’t been six months since their last shot or three months since they got the Johnson & Johnson vaccine.

Although the symptoms of Covid-19 are typically milder for the vaccinated, omicron is more transmissible, even among people who have had two shots. The combination of vaccinated people lowering their guard and the fact that most people in Puerto Rico have not received a booster shot has created an opening for omicron to spread. The result is a growing number of cases, currently at nearly 400 percent more than last winter’s peak, as well as a nearly 600 percent increase in hospitalizations in the last two weeks at a time when the island’s public health infrastructure is struggling.

Despite being thrown the curveball of omicron, Puerto Rico’s government has responded exactly as public health officials have advised, and they are confident that the new measures will get the pandemic under control again. The same can’t be said of other states and territories in the US, which have largely eschewed a return to pandemic lockdowns. 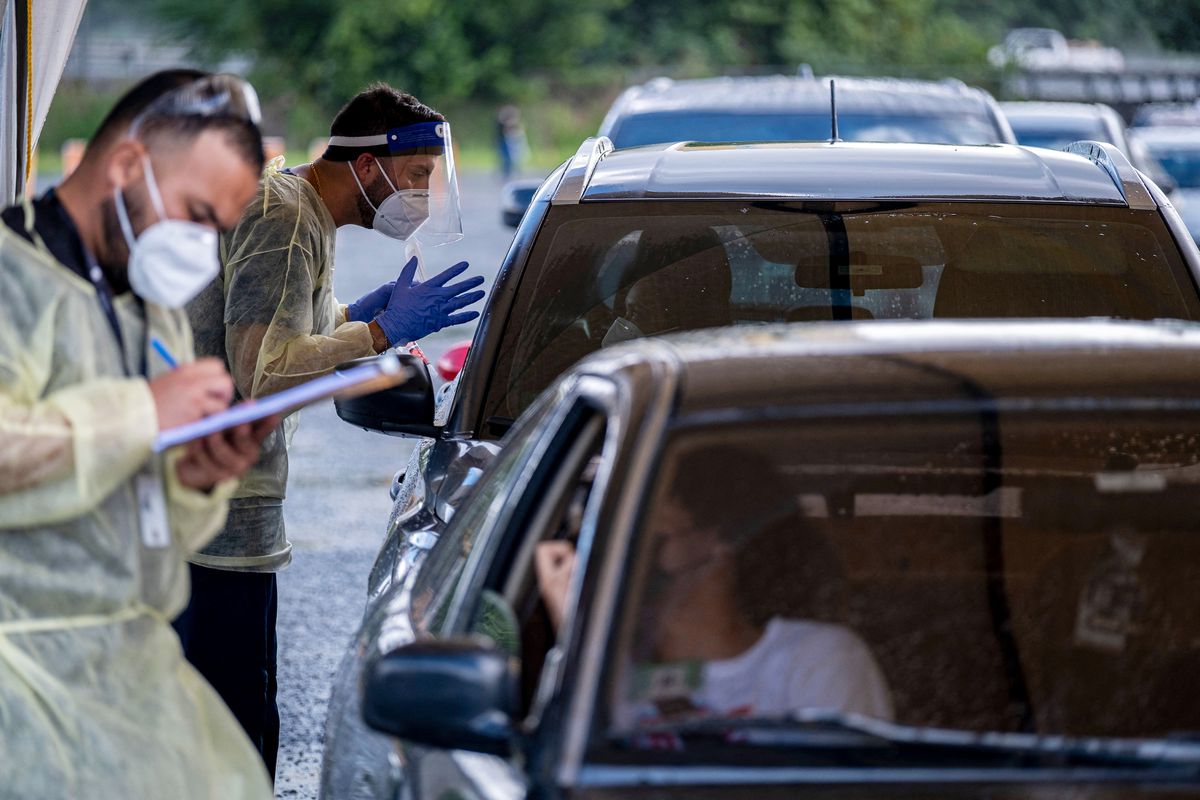 Workers register people to be tested for Covid-19 at the Hiram Bithorn Stadium parking lot in San Juan on December 18.

Hospital staffing shortages are currently proving to be the biggest strain on health care resources across the US, and Puerto Rico is no exception.

“We have the beds,” Ramos said. “The problem we have is personnel. They are tired, they have to stay home because they are contagious, and some are on vacation because of the holidays.”

That means the quality of the complex and resource-intensive care Covid-19 patients require might not be as high as it could be. And that non-Covid-19 patients, especially those who already had limited access to physicians, may face delays in care, which could create long-term health issues that will outlast the pandemic.

There was already a mass exodus of doctors from Puerto Rico after Hurricane Maria hit the island in 2017, in part due to low wages and issues with insurance reimbursement that made it impossible for them to pay their offices and staff. By the following year, the medical specialist workforce had shrunk by 15 percent, meaning that there were only about 9,500 staff to serve the entire population of 3.2 million, as Catherine Kim reported for Vox.

The numbers had recovered somewhat by the time the pandemic emerged. But many medical staff have had to stay home and quarantine when they test positive for Covid-19.

The Centers for Disease Control and Prevention recently changed its recommendation for people to quarantine for five days instead of 10 if fever-free for 24 hours without the use of fever-reducing medication and other symptoms have improved. Though controversial, that guidance could allow asymptomatic health care workers to return to work much sooner, helping alleviate staffing shortages and the availability and quality of medical care for all.

But burnout is also an issue. Many health care workers have left direct care of Covid-19 patients in favor of less risky jobs, such as vaccination and lab work, Ramos said.

All of this has meant that the capacity to address not only Covid-19, but also other patients presenting with urgent medical issues nevertheless remains a challenge. According to the federal government, 72 of the island’s 78 municipalities are medically underserved and have “unmet health care needs.”

Aggravating that issue is the fact that many physicians on the island have reduced their on-site services, and patients with Covid-19 risk factors are afraid to access care in person for fear of contracting the virus. That has led to an explosion of need in the mental health sector and rising incidences of chronic diseases, like diabetes and hypertension, Levis said.

“It drives home the imperative that if Covid is endemic and we’re going to be seeing these surges pop up, we need to make sure that we have alternate ways of communicating with patients,” Levis said.

Unless those longstanding challenges in Puerto Rico’s health care system are addressed, in addition to the immediate personnel shortage, any future waves of the pandemic will continue to pose a risk to the health of Covid-19 patients and anyone else seeking care.