James Clyburn defends federal takeover of elections: ‘Cannot be left up to the states’

This week marked one year since the Jan. 6 Capitol riot that occurred on the day that Congress set to certify President Biden’s win in the 2020 election over former President Donald Trump. The controversy around the post-election days focused on Trump’s efforts to challenge election losses in key states, including Georgia where State Secretary Brad Raffensperger famously rebuffed the then-president’s effort to find more votes.

The dispute revived a long-standing argument over the role of federal officials in elections that some believe should remain entirely under the control of local and state officials.

House Majority Whip James Clyburn, a Democrat from South Carolina and chairman of the House Select Subcommittee on the Coronavirus Crisis, speaks during a hearing in Washington, D.C., U.S., on Wednesday, Sept. 23, 2020. Federal Reserve Chair Jerome Powell yesterday said the U.S. economy has a long way to go before fully recovering from the coronavirus pandemic and will need further support. Photographer: Stefani Reynolds/Bloomberg via Getty Images
(Stefani Reynolds/Bloomberg via Getty Images)

But Clyburn believes that federal officials know exactly what they are doing, and they should retain their roles in such elections.

“I am a federal official, but I understand very well how federal elections are run,” Clyburn argued on “Fox News Sunday.” “Most people who are now serving at the federal level have at one time served in some capacity at the state and local levels as well, so they too have an understanding.” 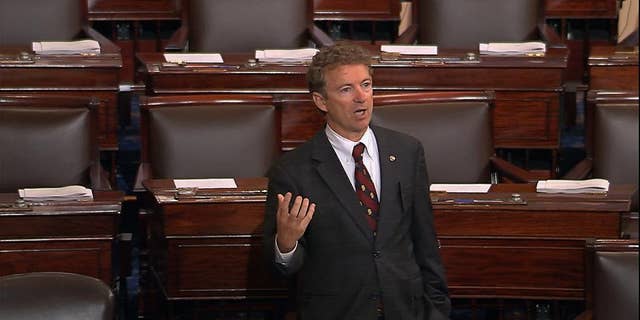 In this image from Senate video, Sen. Rand Paul, R-Ky., and a Republican presidential contender, speaks on the floor of the U.S. Senate Wednesday afternoon, May 20, 2015, at the Capitol in Washington, during a long speech opposing renewal of the Patriot Act. Paul claimed he was filibustering, but under the Senate rules, he wasn’t. (Senate TV via AP)
(The Associated Press)

He echoed Alexander Hamilton that such elections “cannot” and “should not be left up to the states.”

SUNDAY PANEL DISCUSSES MOVING ON FROM JAN. 6, PUTTING COUNTRY AHEAD OF PARTY

The Jan. 6 anniversary also occurred as Senate Democrats have made a renewed push to reform voting rights reforms, including a change to the filibuster in order to pass the reforms.

RON JOHNSON REVEALS EXACTLY WHY HE BROKE HIS TWO-TERM PLEDGE

Clyburn argued that Congress needs to “mature” with the times and make changes where necessary.

“Just because you’ve got one little nugget that was true back in 1876 doesn’t meant that that is true in 1976 … This country has matured,” he added. “This is not the same country it was over 200 years ago. We as a people must mature right along with it.”