Democrats’ next steps on filibuster and Build Back Better, explained

It might be a new year, but Democrats are facing a lot of old challenges.

Namely, they still need to agree on their top priorities, even as lawmakers who made that a difficult task last year — like Sen. Joe Manchin (D-WV) — are poised to continue to do so.

Thus far, resistance from Manchin has meant Democrats struggled to advance everything from their Build Back Better Act, the party’s sweeping social spending and climate bill, to voting rights. Manchin, and in some cases Sen. Kyrsten Sinema (D-AZ), have repeatedly derailed the social spending legislation, while also opposing the filibuster reform needed to pass other bills without Republican support. Making any progress on these goals depend heavily on securing both lawmakers’ backing because Democrats possess the slimmest possible Senate majority. (There are other moderate senators who’ve been reluctant to back filibuster changes in the past, though they’ve been less vocal.)

The time lawmakers have to rally behind both these bills and potential rules changes is also running short as the midterm elections — when Democrats are projected to lose the House majority — approach this fall. Historically, the party in power faces blowback during midterm elections; the GOP believes that this trend, combined with economic conditions, redistricting, and strong fundraising will give it the advantage in the coming elections.

Senate Majority Leader Chuck Schumer has promised votes on both the Build Back Better Act and filibuster reform in the coming weeks. They’re set to expose any continued disagreements within the caucus and highlight how much support both measures actually have. The Build Back Better vote has yet to be scheduled, but the vote on the rules change is expected to happen by January 17 if Republicans filibuster another voting rights bill, as they are expected to do. The rules vote would enable Democrats to support a change or exception to the filibuster to pass voting rights.

“We hope our Republican colleagues change course and work with us,” Schumer wrote in a Dear Colleague letter in January. “But if they do not, the Senate will debate and consider changes to Senate rules on or before January 17, Martin Luther King Jr. Day, to protect the foundation of our democracy: free and fair elections.”

Senate Majority Leader Chuck Schumer speaks to reporters at the US Capitol on December 14.

Currently, neither Build Back Better nor filibuster reform has the Democratic backing needed to move forward. To make progress on either issue, the party will need to overcome long stalemates.

Democrats are struggling to pass legislation because they’ve had the same internal conflicts for months.

On the Build Back Better Act, Democrats still need to win over Manchin. Thus far, they’ve had a hard time proposing a version of the bill that he’s willing to accept. After months of negotiations with Manchin, and the release of a proposal from Biden, Democrats hoped they were close to a deal last winter. But in December, Manchin announced that he wouldn’t be able to support the most recent version of BBB, citing estimated longterm costs of the $1.75 trillion measure and its potential effects on inflation.

“I cannot explain the sweeping Build Back Better Act in West Virginia and I cannot vote to move forward on this mammoth piece of legislation,” he said in a December statement. He said on Tuesday that he hasn’t engaged in negotiations on the bill since then.

But Manchin doesn’t seem to have closed the door completely to some version of the bill. According to an Axios report, Manchin could be open to a bill that eliminates an extension of the expanded child tax credit, or perhaps restricts this benefit more narrowly based on income level. Such cuts are likely to prompt pushback from progressives and other members of the Democratic caucus.

The expanded child tax credit, a landmark Democratic anti-poverty measure which was passed as part of the American Rescue Plan in 2021, is a proposal Manchin has called out repeatedly for its potential longterm costs. Manchin has said he’s against the measure because he believes it will cost far more than estimated if it were extended.

Democrats’ most recent version of the Build Back Better Act cost about $1.75 trillion, roughly within the limits Manchin had requested. But he believes its actual price could wind up being much higher; certain programs like the expanded child tax credit, which are set to sunset after one year, could be renewed by Congress. He argues that if programs set to end in the near term were instead set to expire in 10 years, the costs would be not be covered. And he believes the programs will be renewed due to their popularity. 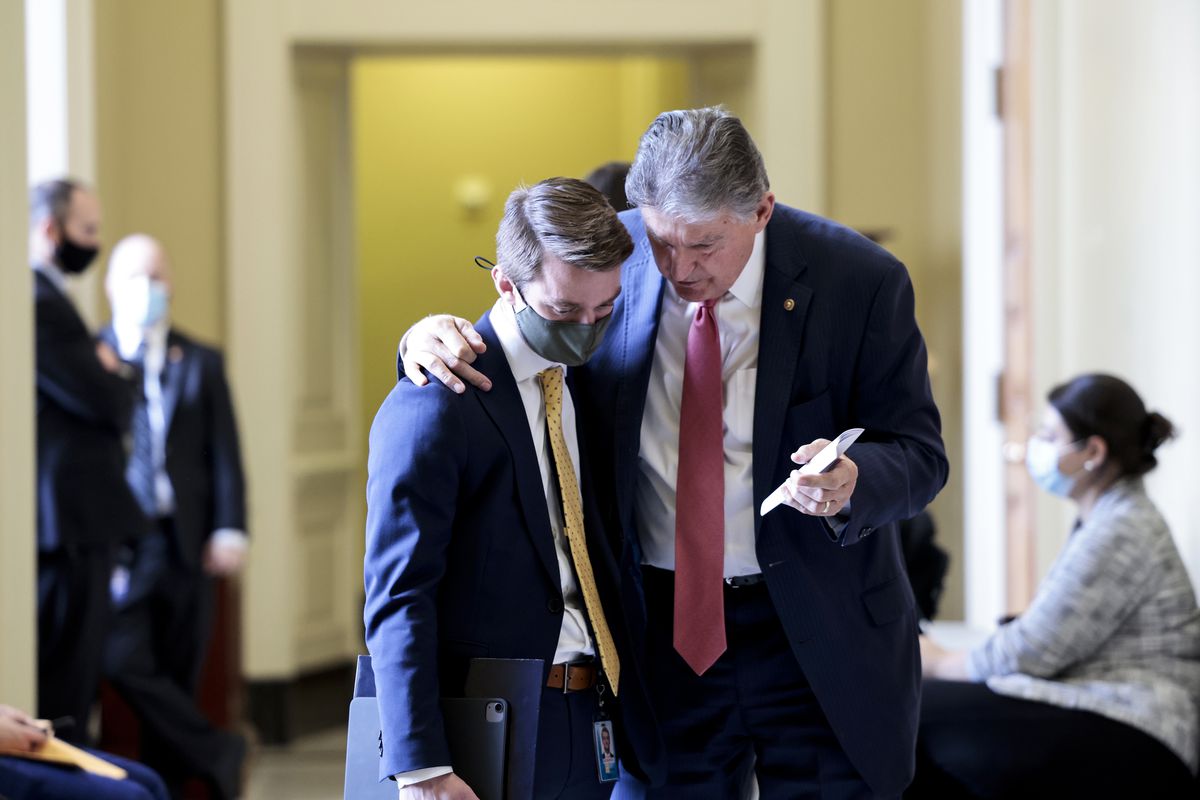 Sen. Joe Manchin speaks to a member of his staff outside of a caucus meeting with Senate Democrats at the US Capitol Building on December 17,

As evidence, Manchin has cited a report from the Congressional Budget Office, which shows that the full costs of the bill’s programs would be much higher if all of them continued for 10 years. The expanded child tax credit, for example, would cost as much as $1.6 trillion if extended for ten years compared to $185 billion for a one-year extension.

The White House, however, notes that it would implement new revenue raisers to address these costs, if any of the programs were extended.

The expanded child tax credit is among the policies that’s had widespread Democratic support and major impacts so far: In October 2021, it reduced child poverty rates by as much as 28 percent compared to what they would have been otherwise, according to the Columbia University Center on Poverty and Social Policy.

To ultimately pass a pared-down Build Back Better Act, however, Democrats will have to find a measure that all wings of the party, including Manchin, are willing to support, which could mean dropping this provision despite its popularity.

There are still Democratic divides over filibuster reform

When it comes to voting rights and the filibuster, Democrats also don’t have agreement yet.

Last fall, all 50 Senate Democrats united behind the Freedom to Vote Act, which would guarantee 15 days of early voting for federal elections, make Election Day a public holiday, and expand the types of ID people could use to vote. But 50 senators isn’t enough — most bills need 60 votes to pass in the Senate if they get blocked through a filibuster. Since Republicans are expected to stymie any voting rights bill by filibustering it, it would need 60 votes, support the legislation doesn’t have.

To get around this requirement, Democrats could approve an exception to the filibuster, but that would require the support of all 50 senators in the caucus. Both Manchin and Sen. Kyrsten Sinema (D-AZ) have been adamant about preserving the filibuster — likely even on voting rights bills — and it’s unclear whether they’ll be swayed this time around.

Asked if he needs any change to Senate/filibuster rules to come with Republican support, Manchin says: “That’s my absolute preference.”

In December, Democrats made an exception to the filibuster to pass an increase to the debt ceiling with 50 votes. Some Democrats including Sens. Raphael Warnock (D-GA) and Alex Padilla (D-CA) emphasized that the maneuver demonstrated how accessible such exceptions are, and have since argued for another one to protect voting rights.

“We think it’s so important that we change the rule in order to save the economy,” Warnock previously told NBC News. “Well, the warning lights on our democracy are blinking right now, and we seem unwilling to respond with the same urgency to protect the democracy that we have to protect the economy.” Republicans agreed to the debt ceiling exception, however, and aren’t expected to do the same on voting rights. 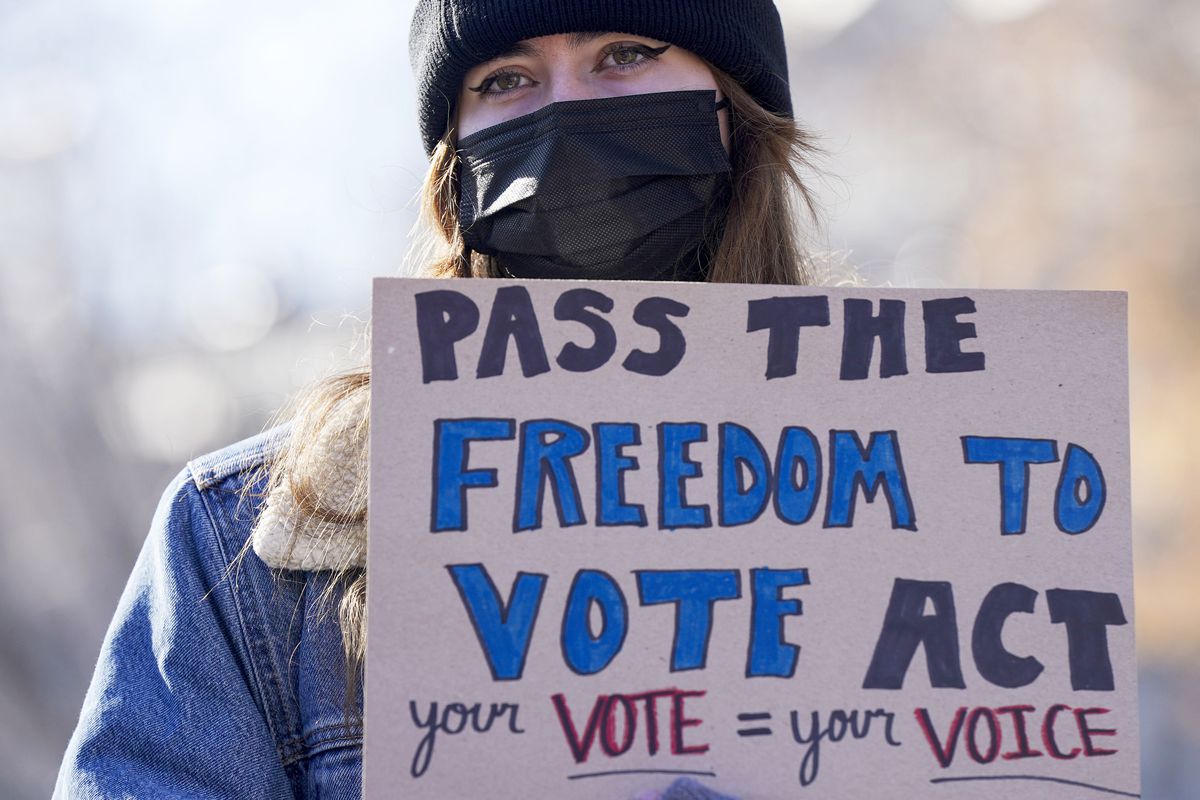 A student rallies for voting rights in front of the White House in December.

Democratic leaders will use the upcoming one-year anniversary of the January 6 insurrection to make their case for voting rights legislation, directly tying the need to pass a bill with former President Donald Trump’s undermining of the 2020 election results and the state measures limiting the right to vote that have passed since.

“January 6th was a symptom of a broader illness — an effort to delegitimize our election process, and the Senate must advance systemic democracy reforms to repair our republic or else the events of that day will not be an aberration — they will be the new norm,” Schumer wrote in the January letter.

Possible filibuster changes that Democrats could consider include a specific carveout enabling lawmakers to approve the legislation with a simple majority, or changes to the filibuster that would require anyone blocking the bill to physically do so by making remarks on the Senate floor. Thus far, none of these options have garnered the backing of the 50 senators who are needed, though.

Key votes will be revealing in the coming weeks

Democrats have been debating Build Back Better since last summer, and changing the filibuster since they won their Senate majority in January 2021. Now, Senate leaders are pressuring members to publicly show what they actually stand, by scheduling votes on both the Build Back Better Act and a filibuster rules change.

Last December, Schumer emphasized that the Senate would confront these votes early on, putting lawmakers on the spot about their positions.

“Senators should be aware that the Senate will, in fact, consider the Build Back Better Act, very early in the new year so that every Member of this body has the opportunity to make their position known on the Senate floor, not just on television,” he wrote in a December letter. The vote on Build Back Better is slated to take place soon, and the vote on the filibuster rules is expected before the end of the month.

Given the disagreement within the caucus, these votes are likely to reveal that the party is still at an impasse in both instances. In the past few months, a group of moderate senators including Tim Kaine (D-VA), Angus King (I-ME), and Jon Tester (D-MT) have been trying to find consensus on filibuster reform, though they haven’t secured it yet.

The rules change vote will also be an opportunity for lawmakers to debate their approaches to filibuster reform, forcing a broader conversation about possible options. Though votes on both Build Back Better and the rules change are widely expected to fail in the short term, they could spur progress, too, showing Democrats how much support they’re working with, and catalyzing additional negotiations within the caucus.

Because of Republican obstruction, Democrats need to find common ground among themselves to get pretty much any of their main priorities done.

The coming months will reveal if they’re able to do it.