Tips for traveling with your dog on the road

I didn’t know until a fall getaway. I had never gone on a trip with a pet. When it came time for my boyfriend and me to plan our annual road trip — two years ago we went to Yosemite and last year we did Arizona, New Mexico and Utah — with a pandemic puppy now living with us, we quickly realized we wanted Millie, our 11-month-old goldendoodle, to come along.

In the weeks leading up to our trip that took us to five national parks — Capitol Reef, Arches, Rocky Mountain, Black Canyon of the Gunnison and Grand Canyon — in a rented camper van, I did tons of research about where to stay, what to do and what to see, including finding dog parks and other dog-friendly spaces.

Two days before we set out on our six-day, five-night trek, I voiced concerns to John. Were we doing the right thing by taking Millie with us? Would she like being in the van for the majority of most days? Would she behave? Would there be enough for her to see and do?

Ultimately, we decided it was too late to change our plans. We just had to go with it. We ended up having a great time and making the sweetest memories. If you’re planning to hit the road in 2022, especially for the first time with a pet, these are some things we learned along the way about traveling with a dog.

Do your research to find the camper van company that works for you. We used Cabana, which I had first heard about in a Times article earlier this year. It allows pets (for a fee). And the big sell? It had unlimited mileage. That was important to us because we knew we’d drive far (we clocked close to 2,500 miles), and we found most other companies only allow for a set number of miles per day and then charge per mile after that.

Millie stretches her legs at a rest stop off of Interstate 70 in Edwards, Colo., just outside of Vail.

Find dog parks or other places your dog can stretch their legs along your route. Depending on your dog’s energy level and needs, you’ll want to stop the car every two hours or so. I made note of a dog park or two every day of the trip so we never had to worry. Still, despite my extensive research, we were pleasantly surprised by a small fenced-in area at a rest stop in southwest Utah where we let Millie run. We stopped at several rest stops along the way when we were ready for a break, but we really loved a Moab dog park where Millie got her legs covered in red dirt and a large park in Montrose, Colo., with lots of trees and small trails where Millie could explore.

Look into dog-friendly spots near your destination or destinations. Our plan was to make this a national park tour, but national parks aren’t overly dog friendly. (They’re allowed but access varies. We found Black Canyon National Park was very welcoming.) This meant tracking down dog parks or state parks, which typically allow dogs, nearby. (I found that Rocky Mountain does a great job of advertising close dog-friendly places on its website.)

Before you go, practice driving your dog around especially if they’re not used to it. Millie is in a car most days, although I was still worried she’d get carsick on the trip. Thankfully she never did despite winding, mountainous roads. We think being used to being in a car helped her a lot. 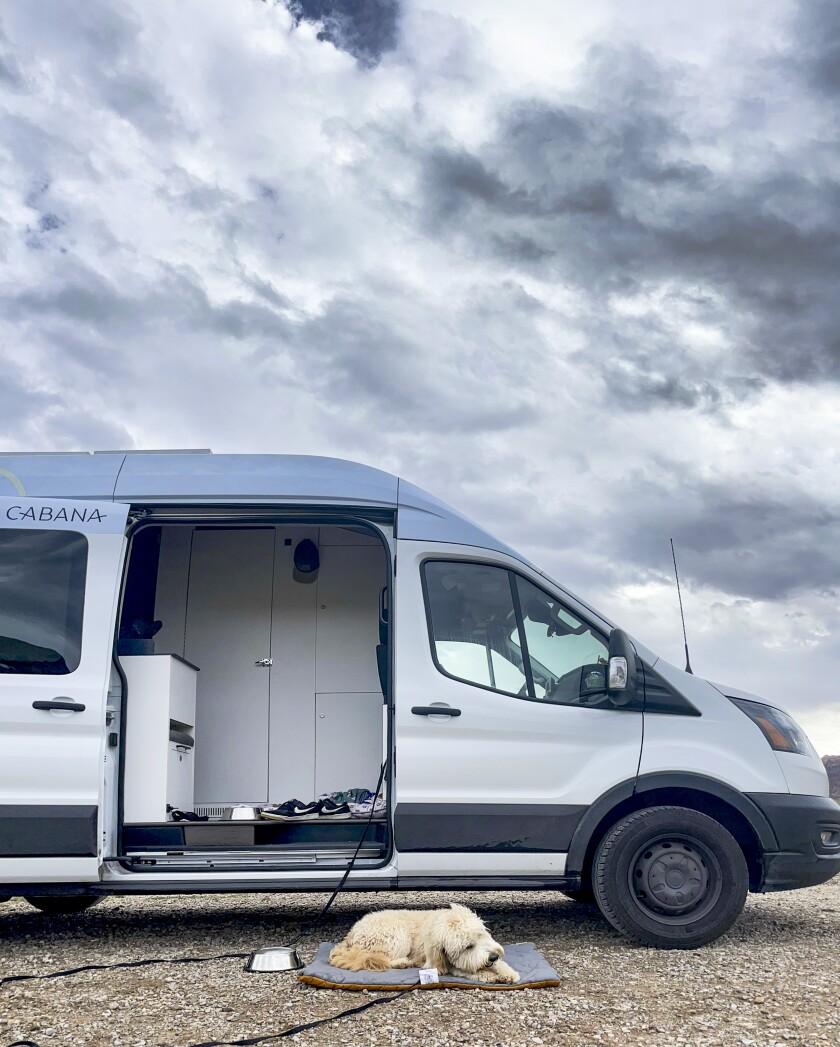 Millie works on a bone marrow chew — one of the many things we packed for her — at a campground in Moab, Utah.

Buy a few things for your dog that’ll make life on the road easier. One of the first things we bought as we neared the start of the trip was a cheap dog bed. We knew it’d likely get dirty (it did) and we were fine with throwing it out when we got home. We also bought a pad for her to lie on outside of the van once we were at a campground, a 20-foot leash so she could have some freedom to explore and a thick bone marrow chew for long stretches in the van.

Bring the comforts of home with you too. I packed up so much of Millie’s stuff it may have looked like we were moving. We brought the dog bed, blankets, a stuffed animal and a few chew sticks and balls. Because I was so worried how she’d do, I may have overdone it, but she seemed to like to have options. Millie especially loved a rope toy, which kept her busy in the van and we’d play together at campgrounds before settling in.

Overpack if you’re able. If you have some extra room in your vehicle, overpacking can make all the difference. We knew we would camp in semi-remote areas and we had days with long drives, so we made sure to bring a few extra things. This is what helped us: towels for when we were covered in dirt, more than enough allergy pills, an extra blanket for the bed and tons of snacks. We also packed more jugs of water than we needed. For Millie, we also had towels, lots of treats and an abundance of food. We always had a small amount of water and food available to her in the van as we drove, and whenever we stopped somewhere, we took a collapsible water bowl for her.

Look into apps to download ahead of time because you may lose service. In Moab, Utah, John and I ran into Morgan Phillips and Amber Calvo, who do photography work for Cabana, and they told us about iOverlander, an app they use to find places to park their van away from people so their two dogs can run (we do not trust Millie enough yet for that). We downloaded the app and toward the end of our trip, when we were in a crunch, we used it for the first time. iOverlander had plenty of recommendations — submitted by the app’s users — of remote places to park and overnight street parking in cities. 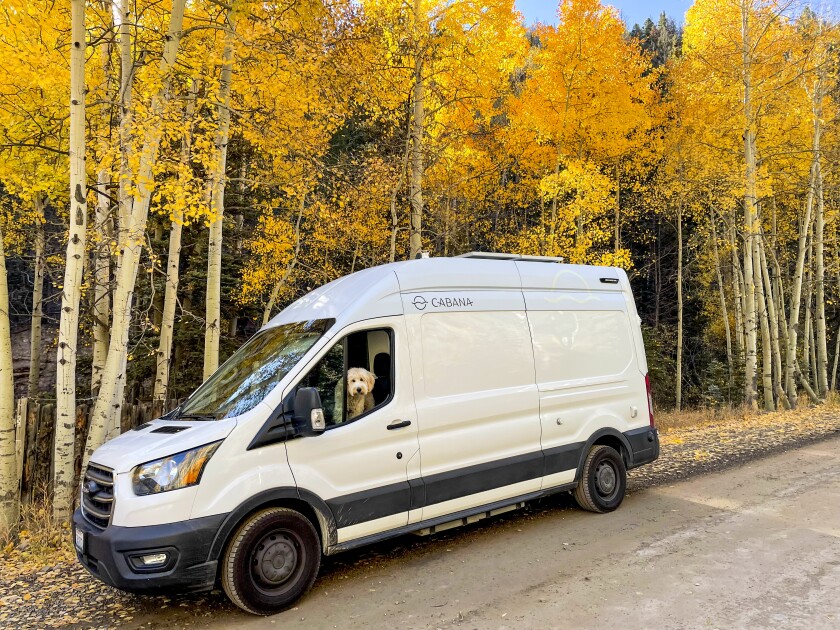 Millie in the Cabana on a dirt road just outside of Telluride, Colo.

Make a backup plan for everything, especially if you’re going somewhere with bad weather. I had lengthy notes ahead of the trip, but there were a few instances for which I didn’t have backup plan. We found ourselves having a small setback our first night in Colorado when snow caused a highway to shut down, preventing us from getting to our campsite. We ended up scrambling to find a spot to spend the night. After initially failing to find a place to park the van overnight, we tried a nearby campground, a hotel and street parking. We ended up settling for the night in a large parking lot in Golden, Colo., that served a strip mall, a Holiday Inn Express and a Home Depot.

Last, have realistic expectations. This could be in terms of your vehicle, your plans, your traveling partner or your pet. Millie has never walked more than two miles at a time, so we knew tough hikes wouldn’t be an option. Because we had an ambitious itinerary, we also knew we never had too long in any one place. Still, we carved out time for local coffee in Torrey, dinner from a food truck under string lights in Moab, stopping to marvel at yellow trees in Telluride and playing in the snow at the Grand Canyon.

So, will we travel with Millie again? Two days into this trip, we already started planning the next one.