Airlines rely on cooking oil to eliminate emissions by 2050

Earlier this month, a United Airlines flight from Chicago to Washington made a bit of aviation history, completing a 600-mile trip that the airline hopes will prove the first leg of a journey to a greener future.

In a first, one of the two engines on the 737 Max 8 was powered exclusively by fuel made from used cooking oil and rendered waste fat from beef, pork and chicken. Refined at a Southern California plant, the fuel produces about 80% less emissions than conventional jet fuel, according to the carrier. Biofuel had been mixed with conventional fuel in the past, but United Airlines said it had never been used by itself in the engine of a commercial flight.

The Chicago carrier made the flight to showcase progress it has made toward its goal of eliminating greenhouse gas emissions by 2050. It’s a goal shared by the International Air Transport Assn., the trade group representing the world’s airlines.

But reaching the lofty goal of completely eliminating aviation emissions — responsible for 3% to 4% of the world’s carbon emissions — won’t be easy. It will take huge government investments in the form of tax breaks or grants and ground-breaking technological advances, such as the development of hybrid or all-electric jet planes, aviation experts and academics say.

In the meantime, airlines that want to use more low-emission sustainable aviation fuel will have to pay up to four times as much for it as they pay for conventional fuel, which could mean higher airfares for everyone.

“It’s not clear how we are going to get there,” said Jan Brueckner, a professor and chair of the economics department at UC Irvine’s Institute of Transportation Studies. “Maybe by 2050, it’s possible if a bunch of things come together.”

United Airlines has been testing fuel made from used cooking oil and rendered waste fat from beef, pork and chicken.

Not all airline executives are convinced aviation emissions can be eliminated by 2050.

“I think we are making a lot of promises we can’t keep,” Alex Wilcox, chief executive and co-founder of JSX, an independent airline in Dallas, said during a panel discussion on sustainability at a recent airline trade show in Long Beach.

Airlines say the effort — even if the goal can’t be reached — makes good business sense.

“There are people who want to fly with an airline that reflects their beliefs and values,” said United spokesperson Maddie King. “There are customers out there who are very interested in making their own lifestyle sustainable.”

Some may be driven by so-called flight shame, the guilt that environmentally minded travelers have about the carbon footprint of their plane trips. It is a sentiment that is gaining popularity, thanks in part to the efforts of Swedish environmental activist Greta Thunberg.

Another motivation for the airlines is the fear that governments will begin to mandate emissions reductions through the use of fines or taxes. It has already begun in Europe, where the European Union has proposed an environmental plan that, among other changes, would revamp the bloc’s emissions trading program and introduce taxes on shipping and aviation fuels for the first time.

A survey by a United Nations initiative of 1,200 chief executives from around the world found that 72% believe sustainability is an immediate priority. 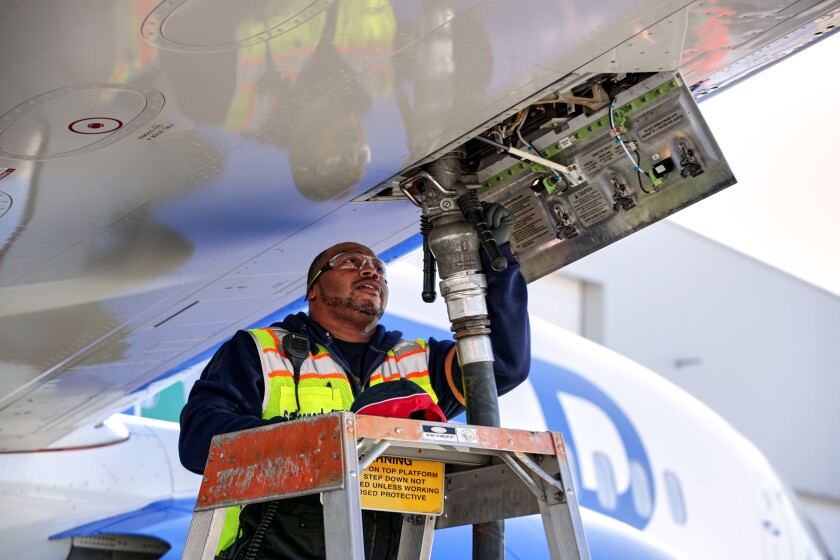 The biofuel refined at a Southern California plant produces about 80% less emissions than conventional jet fuel.

The term “net zero” is somewhat misleading. IATA makes clear in its literature that using sustainable aviation fuel would achieve only about 65% of the goal, with an additional 13% coming from the use of new technology to make planes lighter, more fuel efficient and aerodynamic. Over the last few years, many airlines have added “winglets” — vertical extensions of the wingtips on planes — to improve fuel efficiency by about 5%.

Of the remaining emissions reductions, the lion’s share, about 19%, would have to come from what are known as “offsets” or “carbon capture” technology. In other words, the airlines would have to offset some aviation emissions by paying a third party to plant forests or preserve wetlands or by investing in the nascent technology that captures carbon by collecting it before it is released from such operations as coal-fired power plants, chemical plants or biomass power plants and storing it underground. United Airlines says it hopes to reach its goal without offsets.

Scientists and some environmentalists are cautious about how effective offsets are at achieving their aims.

To complete the transition, airlines will eventually need to abandon combustion engines and turn to alternative technology, such as hybrid or all-electric aircraft, according to experts. IATA envisions making the switch to such technology sometime in the 2030s.

Still, experts say batteries must become substantially lighter and more powerful before they can provide the propulsion for commercial planes. In the short term, an electric plane might be feasible for short flights, those of less than 200 miles, but developing batteries that can power a transcontinental or transatlantic flight could be decades away, they say.

“The path between where we are now and there requires substantial innovation,” said Gene Gebolys, chief executive of World Energy, a Boston biofuel energy company.

For now, the biggest challenge is producing enough low-emission, sustainable jet fuel that can be used in existing commercial jets without modifications to power the world’s airlines. 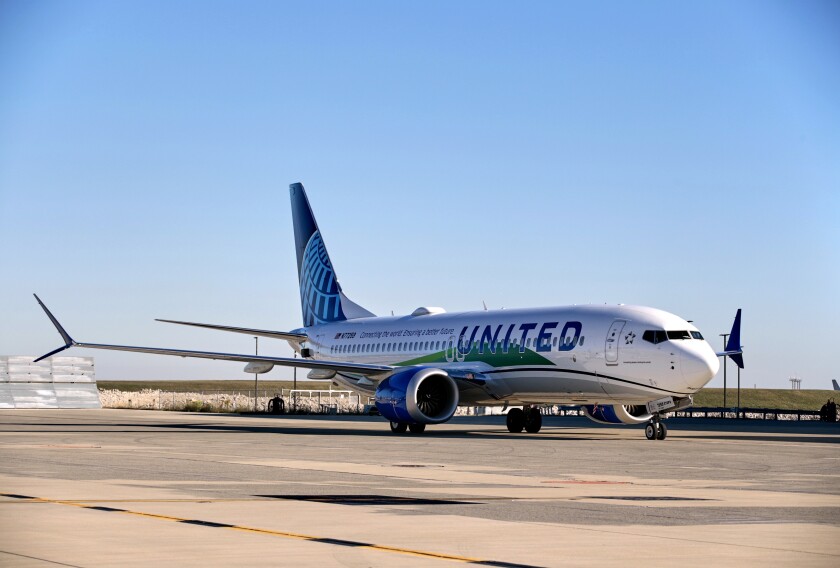 United Airlines made the biofuel-powered flight to showcase progress it has made toward its goal of eliminating greenhouse gas emissions by 2050.

A proposal in President Biden’s “Build Back Better” plan calls for a fuel tax credit that could boost production of sustainable aviation fuel to 3 billion gallons a year by 2030 — still a fraction of the fuel that airlines expect to need over the next decade.

“There is no question there is a challenge,” Gebolys said. “It’s all about scale.”

World Energy’s Paramount facility now has the capacity to refine cooking oil and rendered animal fat into 15 million gallons of sustainable aviation fuel a year. The fuel was used in United’s demonstration flight Dec. 1 and is used on JetBlue flights out of Los Angeles International Airport. The company is now investing $1.5 billion to modernize the facility and enable it to produce up to 370 million gallons a year.

“Standing where we are right now, it is going to be an extremely ambitious goal to get to net zero by 2050,” Gebolys said. “Do I think it’s possible? Absolutely.”

Neste, a Finish company that calls itself the world’s largest producer of renewable diesel and jet fuel, generates 34 million gallons a year, with plans to reach 515 million gallons by mid-2023.

“This is a nascent industry,” said Jeremy Baines, president of Neste U.S. “Petroleum producers have been at it for 100 years.”

For now, biofuel producers are relying on used cooking oil, rendered animal fat, the jatropha plant, algae and other so-called feedstock, but experts say refineries do not have access to enough of those materials to produce the billions of gallons of aviation fuel needed to reach the net-zero goal.

About 3 billion gallons of used cooking oil is collected annually from the nation’s hotels and restaurants, according to the U.S. Environmental Protection Agency, but a lot of oil ends up in landfills or in sewers. It takes about eight gallons of used cooking oil to make one gallon of sustainable aviation fuel, industry experts say. That means that even if every drop of cooking oil were collected and turned into jet fuel today, it still wouldn’t be enough to fuel all current flights.

“There is only so much used cooking oil in the world,” said Joshua S. Heyne, a professor of mechanical and aerospace engineering at the University of Dayton.

To motivate private companies to increase the collection of used cooking oil, rendered animal fat and other feedstock, governments would probably have to provide tax breaks or grants to make it profitable, industry experts say.

“It’s feasible, but you need the incentives to be right,” Brueckner said.